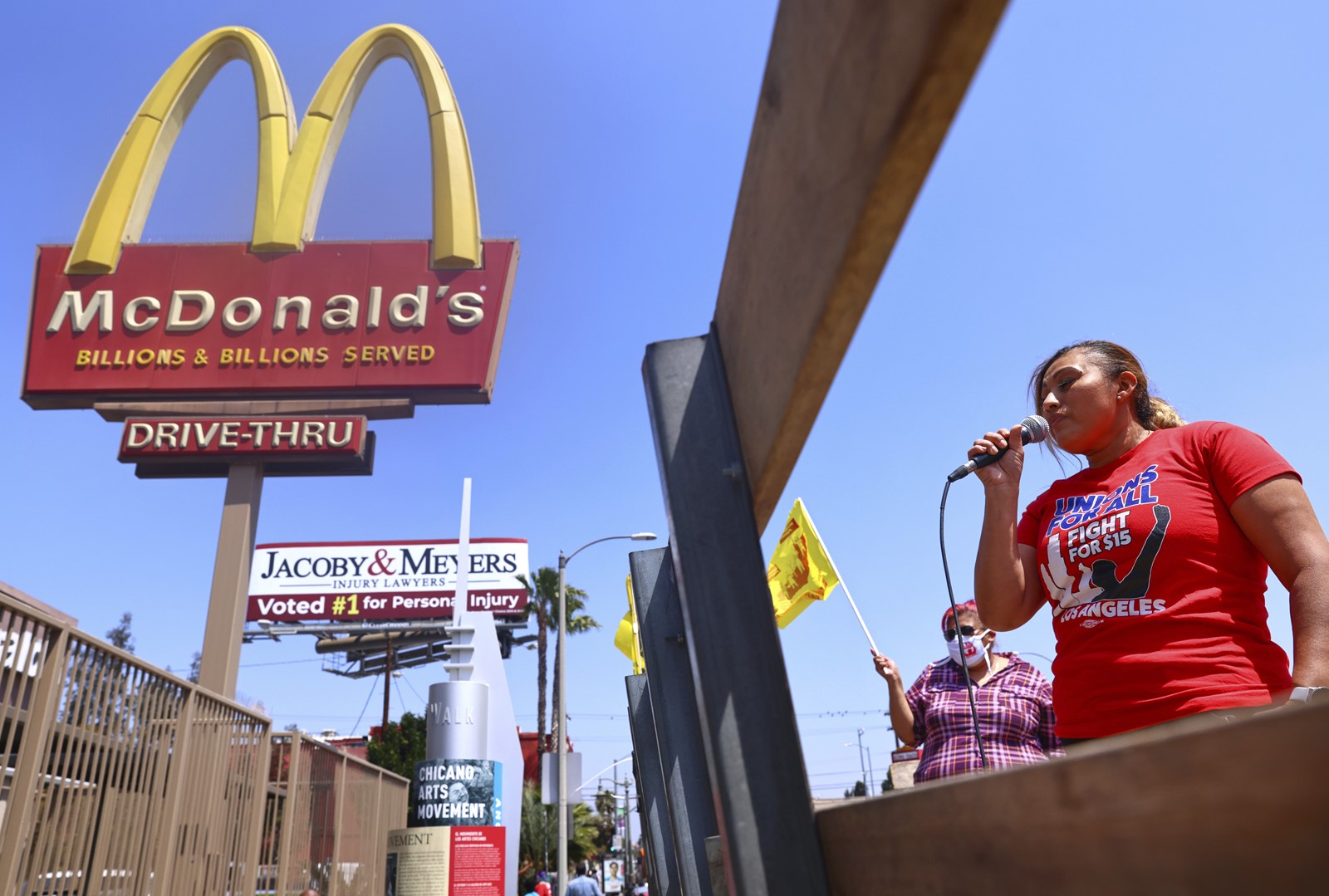 McDONALD’S employee Nidia Torres speaks at a Boyle Heights rally in 2021 for AB 257, which passed in the Assembly on Monday and now heads to the Senate. (Mario Tama Getty Images)
PREVIOUS IMAGE

For Perla Hernandez, 42, working through the pandemic at a Burger King outside San Jose has been a harrowing experience.

Eight of her fellow workers came down with COVID-19 during her two years on the job. She says that included a supervisor whose positive test was kept from her until she had been working with him for hours; another supervisor pleaded with her not to go home because the restaurant was so short-staffed.

The company provided her with a mask and protective gloves early in the pandemic but didn’t arrange to replace them, even though the gloves were in shreds before her shift was over.

In the back of the restaurant, where Hernandez works as a cook, there’s no air conditioning. When she was injured on the job and had to stay home for eight days with stitches in both legs, there was no sick

“We need the job, so we have to do whatever the managers ask,” she told me through an interpreter.

Hernandez isn’t alone in feeling pressure to work through the pandemic, no matter the workload or the risks to workers’ and customers’ health.

“Just wear a mask and don’t tell anyone,” the manager of a Jack in the Box in Folsom told worker Maria Bernal after she appeared to come down with COVID-19, according to a Jan. 14 complaint Bernal filed with Sacramento County’s public health department.

The fast-food industry has long been a dark corner of the American workplace. Now, California is poised to bring that corner some light.

On Monday, the state Assembly passed AB 257, a measure that for the first time would impose workplace standards on the entire statewide industry. The bill garnered 41 votes, the bare minimum needed for passage, and now heads to the state Senate.

There may be no more consequential measure for labor rights in Sacramento this session.

The so-called Fast Recovery Act (the full name is the Fast Food Accountability and Standards Recovery Act) would create a fast-food industry council with the power to set statewide standards for wages, working hours, sick leave, training and working conditions applicable to the more than 550,000 fast-food workers in the state, the largest such workforce in the country.

“They’re some of the lowest-paid and least protected essential workers in our state,” says Tia Orr, interim executive director of the Service Employees International Union of California, the sponsor of AB 257. Of those workers 80% are people of color and 60% are Latinos and Latinas.

The goal of the bill, Orr told me, is to give those workers a voice — and indeed to give franchisees a voice too.

The bill would bar discrimination or retaliation against any worker for identifying workplace violations. Perhaps most important, it would make franchisers jointly liable with their franchisees for those violations. That would represent a dramatic and long-overdue change in the existing business model.

The main reason for the disgraceful working conditions in the fast-food industry is its fragmentation into franchisers and franchisees.

The former are the big branded companies such as McDonald’s and Burger King, which supply tens of thousands of their branded restaurants with supplies and advertising support, and insist that the restaurants meet brand standards — worker uniforms, restaurant designs and locations, etc., etc.

Typically the big brands operate a handful of restaurants directly while placing the vast majority in the hands of franchisees. The actual owners and operators of those restaurants, they’re traditionally depicted as small businesses, those putative cornerstones of American commerce.

Whenever something goes wrong on the restaurant floor — wage theft, harassment, unsafe and unhealthy practices and other violations of labor standards, the franchisers point the finger at the franchisees.

The bill, the association said, “makes the improper assumption, and reaches the improper conclusion, that the franchisor and franchisee have some collective control over each other’s day-to-day business affairs.”

This is just subterfuge. “Powerful global corporations like McDonald’s use the franchise model to ensure they extract profits from the business,” Catherine L. Fisk and Amy W. Reavis of UC Berkeley’s law school observed in December. “They control the prices and much of the power over quality, hours, and other operations, and the franchisee ... has no way to increase its profits other than cutting labor costs.”

The result, they wrote, is that “operators fail to pay wages to which workers are entitled, deny sick leave, ignore harassment, safety hazards, or disease transmission — they are so squeezed by their franchisors that there is little incentive to comply with the law.”

David Weil, a former Department of Labor official under President Obama and currently a Biden administration nominee for his old post, documented in his 2014 book, “The Fissured Workplace,” that half of the top 20 franchiser brands “had no violations and owed back wages at of their company-owned outlets even though the franchisees in those same companies often owed substantial back wages to employees.” (Emphases in the original.)

What do the big companies gain from pushing expenses down to the franchisees? They gain profits while their front-line workers are mired at the minimum wage — when their pay is not being stolen through forced overtime and unpaid hours.

“On the corporate side, there’s billions of dollars of profits that should be shared with the folks working every day to bring those profits in,” Orr says.

The big franchisers tend to get their way in Washington. For example, they’ve been able to bottle up President Biden’s nomination of Weil as wage and hour regulator at the Department of Labor. What’s their objection? It’s that as a long-term spokesman for the rights of workers he would be a powerful guardian of employee rights.

The biggest threat to the fast-food industry’s business model is the joint employer standard, which would make companies like McDonald’s responsible for the workplace conditions at their franchisees’ stores.

Under Obama, the National Labor Relations Board overturned dodges through which big employers outsourced to subcontractors their responsibility for working conditions and wages. Trump’s NLRB issued a rule that in effect absolved the big companies of that responsibility. Biden’s NLRB is now poised to restore the Obama-era rule, which has franchisers shaking in their boots.

The franchise industry and other critics have tried to portray AB 257 as an economy killer.

Assemblyman Kelly Seyarto (R-Murrieta) predicted that the bill would drive “entire franchises and franchise brands away from California.” That sounds like some sort of a gag, as though any franchise chain would abandon the biggest state in the Union.

The franchise association also asserted that the measure would place labor regulation in the hands of a council “unaccountable to the Legislature and outside of existing labor regulation.”

Perhaps the association’s crack team didn’t bother to read the bill before issuing its broadside: It states that the Legislature would have 60 days to rule on any standard devised by the council, and that in no case could the council devise a standard weaker than that in existing law.

In any case, the Fast Food Sector Council’s 11 members would be appointed by the governor, the speaker of the Assembly and the Senate Rules Committee. The body would have to include representatives of the state public health, occupational safety and health, labor standards, and industrial relations regulatory agencies, as well as six members representing franchisers, franchisees and employees.

Up to this point, the only voices that have mattered in the debate over how fast-food employees are treated have been the franchisers. It’s time for the others to be heard.