Leaders of L.A. union say distance learning should continue until campuses are safe. 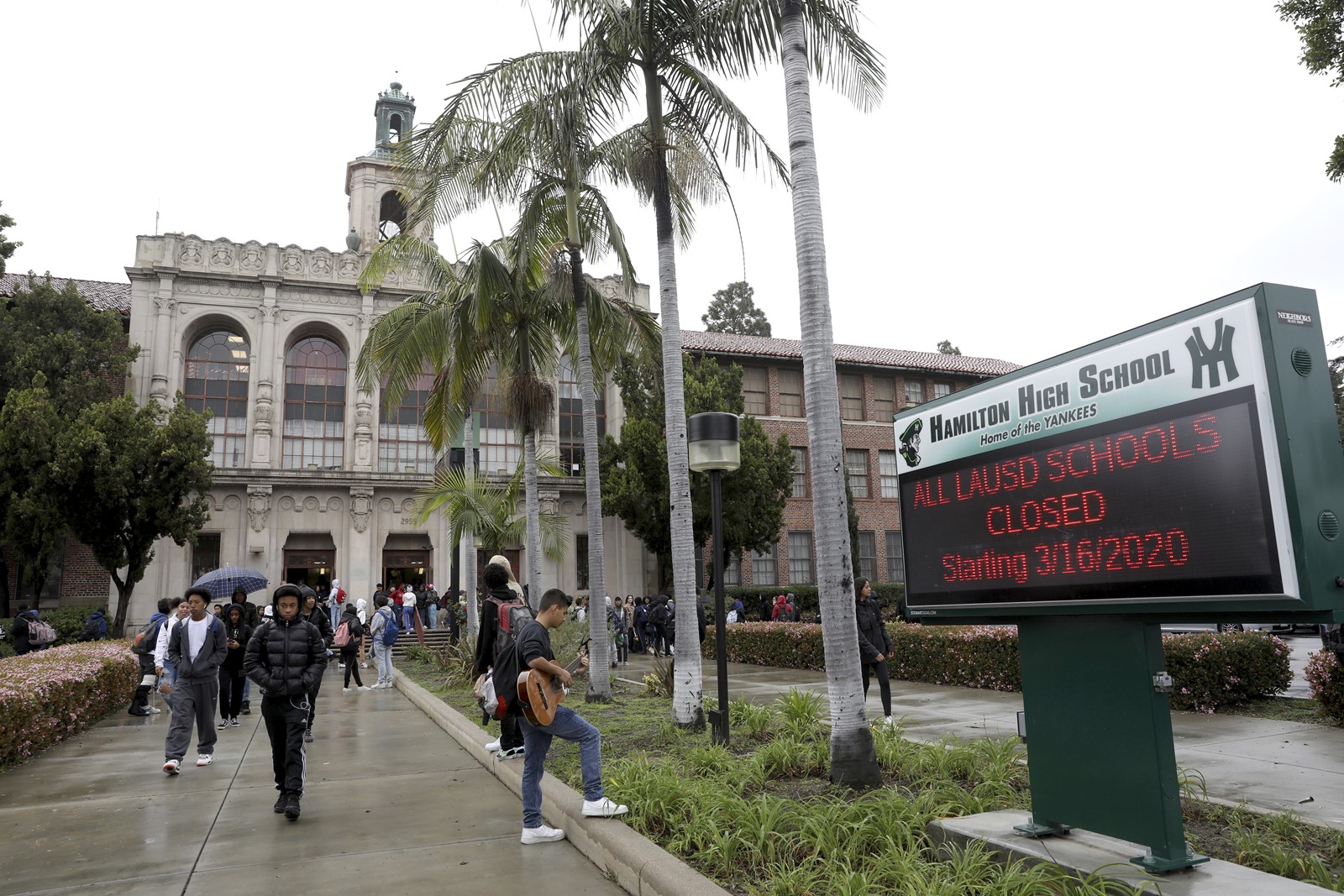 UNITED TEACHERS Los Angeles, the main teachers union for L.A. Unified, is calling for campuses to remain closed and for distance learning to continue when the school year begins Aug. 18. Above, Hamilton High in March just before its closure because of the pandemic. (Gary Coronado Los Angeles Times)
PREVIOUS IMAGE

Leaders of the Los Angeles teachers union on Friday called for campuses to remain closed and for distance learning to continue when the school year begins Aug. 18. Union leaders have concluded it is not safe to bring children back on campus as COVID-19 cases in Los Angeles County surge to new highs.

The union also released a report suggesting parameters for reopening will be difficult to meet any time in the near future, although they are in line with what some health experts are recommending. In an informal poll released Friday night, 83% of union members who responded agreed that Los Angeles Unified campuses should not physically reopen next month.

The union represents about 32,000 district employees, including teachers, counselors, nurses and librarians. Of those, some 18,000 had responded to the poll as of Friday night.

L.A. school officials have yet to make a decision on reopening, but when it happens, the district would offer two options: a learning-from-home program and a hybrid plan that would combine learning at home with part-time attendance on campus in small, socially distanced classes.

Earlier in the week, L.A. County Director of Public Health Barbara Ferrer told school district leaders that they must prepare for the possibility that students would need to continue learning remotely 100% of the time at the start of the school year.

In effect, the teachers union, United Teachers Los Angeles, is calling to go one step further, and make the decision now — giving families and employees time to prepare. The union’s position has been influential on matters pertaining to the pandemic. In March, union leaders demanded that campuses be closed, and L.A. schools Supt. Austin Beutner announced that move the next day.

The union is negotiating with district officials over working conditions for the fall. In a statement, union President Cecily Myart-Cruz acknowledged the shortcomings of distance learning but said health considerations had to take top priority.

“We all want to physically open schools and be back with our students, but lives hang in the balance,” Myart-Cruz said. “Safety has to be the priority. We need to get this right for our communities.”

L.A. Unified families, who are majority low-income and majority Latino, are especially vulnerable to the potentially dire effects of COVID-19, Myart-Cruz said.

In criticizing the politicization of the health considerations, Myart-Cruz singled out President Trump, who this week called for campuses to reopen and threatened to withhold funding from those that did not. The president and his advisors insisted that children would be better off in traditional classes and a regular school schedule would allow parents to return to work, helping families and also providing a necessary boost to the economy.

In making that argument, Trump criticized the safety advice provided by the federal Centers for Disease Control and Prevention as too expensive and impractical, tweeting: “I will be meeting with them!!!” However, the CDC said Thursday it would not revise its guidelines.

Given the surge of the virus in L.A. County, Myart-Cruz called Trump’s threats over funding “alarming.”

“We have to take a stand against this dangerous, antiscience agenda that puts the lives of our members, our students and all of our families at risk,” she said.

On Friday, the American Academy of Pediatrics released a joint statement with the two largest national teachers unions and a national school administrators union committing “to doing everything we can so that all students have the opportunity to safely resume in-person learning” because of the benefits of campuses, including “social and emotional skills ... healthy meals and exercise, mental health support and other services that cannot be easily replicated online.”

But the groups urged caution and said leaders should follow local public health officials’ advice when deciding when to reopen schools, noting that doing so may not be possible in areas with high rates of community spread.

L.A. Unified does not have enough resources to fund the safe opening of schools, which would require testing and contact tracing, physical distancing, hygiene and protection for high-risk staff and students, said UTLA Secretary Arlene Inouye, who leads the bargaining team.

The L.A. County Office of Education could not quantify how much it would cost per student for required health and safety measures once campuses reopen, spokeswoman Margo Minecki said. The 80 districts in the county are developing reopening plans, but many are “waiting for the final protocols from County Public Health before finalizing and announcing plans to their communities,” she said.

The state is providing some gear to schools, and although contact tracing and testing in schools would be public health agencies’ responsibility, school district leaders can decide to adopt stricter health and safety protocols than the county’s public health agency mandates, she said.

In an interview before UTLA announced its position, L.A. Unified board President Richard Vladovic said he’s “not counting on” schools opening even on a hybrid basis in the fall.

“You need to test everyone at least once a week, you have to. And if you don’t, we’re going to have a major problem,” Vladovic said. But students who are falling behind may need face-to-face learning in small groups to make up for lost instructional time, he said.

In a Facebook thread this week, union members — including teachers, counselors, nurses and librarians — expressed their concerns. The union is conducting its own poll to determine whether members support the leadership’s call not to reopen campuses, Myart-Cruz said.

“You think I’m safe at 71 going into a classroom of students ... or any of my colleagues?” wrote Sandy Dorfman, who teaches at Castlebay Lane Elementary in Porter Ranch. “The air conditioning system will recirculate the sick air throughout the school! ... Does anyone think kids are keeping masks on properly? Do you think we can hear elementary kids through masks? All day long kids leaving class to go to the bathroom ... touching door knobs — insanity!”

During the pandemic, MarcelaChagoya, a UTLA member and special-education teacher at Robert Louis Stevenson College and Career Prep in Boyle Heights, taught her classes remotely while also overseeing her 10-year-old son’s progress at home.

In addition, she helps care for her 84-year-old mother, who is on oxygen 24 hours a day, and her 50-year-old brother, who is autistic and nonverbal.