Bush’s true character shone through during the crisis, associates say 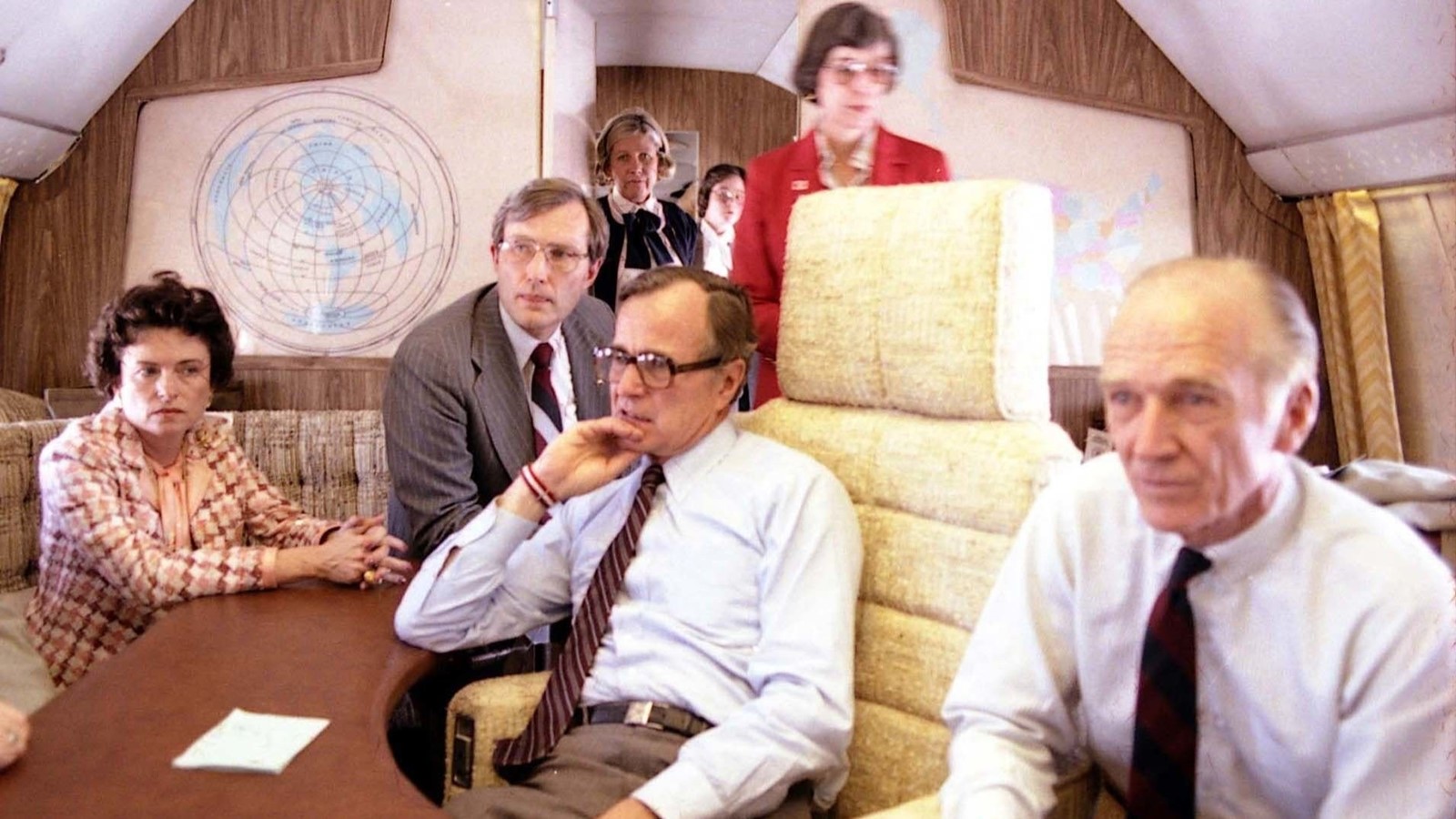 It started as just another day in the vice presidency of George H.W. Bush.

He unveiled a plaque at the Hotel Texas in Fort Worth where President Kennedy had spent his last night alive and delivered a speech to a convention of cattle raisers. Next on the agenda was a speech in Austin to the Texas Legislature.

The vice president boarded Air Force Two and settled into his seat for the short flight to the state capital. Outside, it was bright and clear, fields of green stretching in all directions, not a hint something had gone terribly wrong 1,300 miles away on a gray afternoon in Washington.

It was just after 2:45 p.m. EST on March 30, 1981, when a knock on his cabin door ushered in a dramatic and traumatic day that tested Bush, associates say, and revealed his character as a composed leader under fire — a trait that he displayed again and again as president.

A Secret Service agent burst into the room.

“Sir, we’ve just received word about a shooting in Washington. There is no indication that the president has been hit. Word is that two agents are down. That’s all we have right now. But I’m going to make some calls and see if I can get some more information.”

As Bush would learn, the initial report was horrifically wrong.

President Reagan had indeed been shot outside the Washington Hilton Hotel, and far more seriously hurt than the public was told at the time. Wounded in the chest, Reagan was in shock and would lose more than half his blood.

The would-be assassin’s bullet was lodged just an inch from his heart.

Reports from Washington were sketchy, and Air Force Two did not have secure voice communication. When Secretary of State Alexander Haig called Bush to alert him to the situation, they could barely hear each other over thick static.

Haig was forced to send a secure teletype relaying that Reagan had indeed been wounded, was in serious condition and doctors were weighing whether to operate. They ultimately did.

The mood in Air Force Two was grim as it streaked back to Washington. The vice president, staffers and three members of Congress stared transfixed at a small black-and-white TV set that had in-and-out reception as it broadcast news reports of the shooting and its aftermath.

As the plane made a quick stop in Austin to refuel, Bush prayed — for Reagan and the nation. He scribbled some notes on a flight information card, reflecting that it had taken about 20 minutes for the “enormity” of the situation to hit him.

He also granted an interview to one of his aides, Chase Untermeyer, to capture his thoughts for posterity.

Bush said he felt terrible about what had happened. The 56-year-old former oilman, member of Congress and CIA director had once been bitter political adversaries with Reagan. But since he joined Reagan’s ticket in the 1980 campaign, they had formed a close personal bond.

Bush now considered the president a true friend. It pained him to watch replays on TV of the shooting. “You see a guy get into a car, waving,” Bush told Untermeyer, “and you think, ‘How could anybody shoot that nice guy?’ ”

Despite the turmoil, the vice president remained cool as he pondered his awesome responsibility if Reagan were to die.

He was particularly concerned that the Soviet Union might use its military to put down labor unrest and dissent in Poland, or move aggressively to take advantage of the confusion in Washington.

“I’ve been doing my reading” on national security matters, Bush said, and was convinced he could make tough decisions.

“I’ve got to sort those things out, absorb it, but I don’t feel any lack of confidence.… My every inclination is to be calm; not churning around.”

His staffers, who were not nearly so collected as they struggled to comprehend what had happened, admired their boss’ poise.

“My chief memory of that day was his great sense of calm, of being in control and in command,” Untermeyer told The Times in an interview Saturday. “If there was any emotion to note in particular, [it was] concern for his new friend Ronald Reagan.”

Bush was also worried about Nancy Reagan and how she was faring. “Is anybody holding her hand?” he wondered.

As the plane neared Washington, Bush learned that doctors had removed the bullet from Reagan’s left lung and stopped the bleeding. The president was stable and going to make it.

But he was not yet conscious and had a tough recovery ahead. Bush knew everyone was looking to him for leadership.

The Secret Service recommended that Bush, upon landing at Andrews Air Force Base, fly by helicopter directly to the White House. It was the safest and fastest way to get him to the Situation Room, where he could take control of the government.

Landing on the South Lawn would also make for dramatic television, but Bush didn’t think it was a good idea. The vice president instead insisted the chopper fly to his official residence at the Naval Observatory, where he would hop in a motorcade to the White House.

It would take longer, but Bush didn’t want to signal the situation was more dire than it was. It would be far better to play it low-key, he said. Only presidents land on the South Lawn, he noted, and he wasn’t the president.

On a personal level, he felt, landing at the White House would be disrespectful to the first lady — the landing pad was not far from her bedroom window.

Once in the Situation Room, Bush took a chair at the head of the table, was briefed on Reagan’s condition and the state of global affairs, and urged everyone to be deliberate and cautious.

He next delivered a short, nationally televised statement from the press briefing room assuring the world that Reagan was doing better and the U.S. government was functioning.

He took no questions from reporters before heading back to his office in the West Wing — not the Oval Office — to continue working. His presidency would come in its own time.