President trails Biden in Midwestern states that have been hit hard in latest wave. He faults the media. 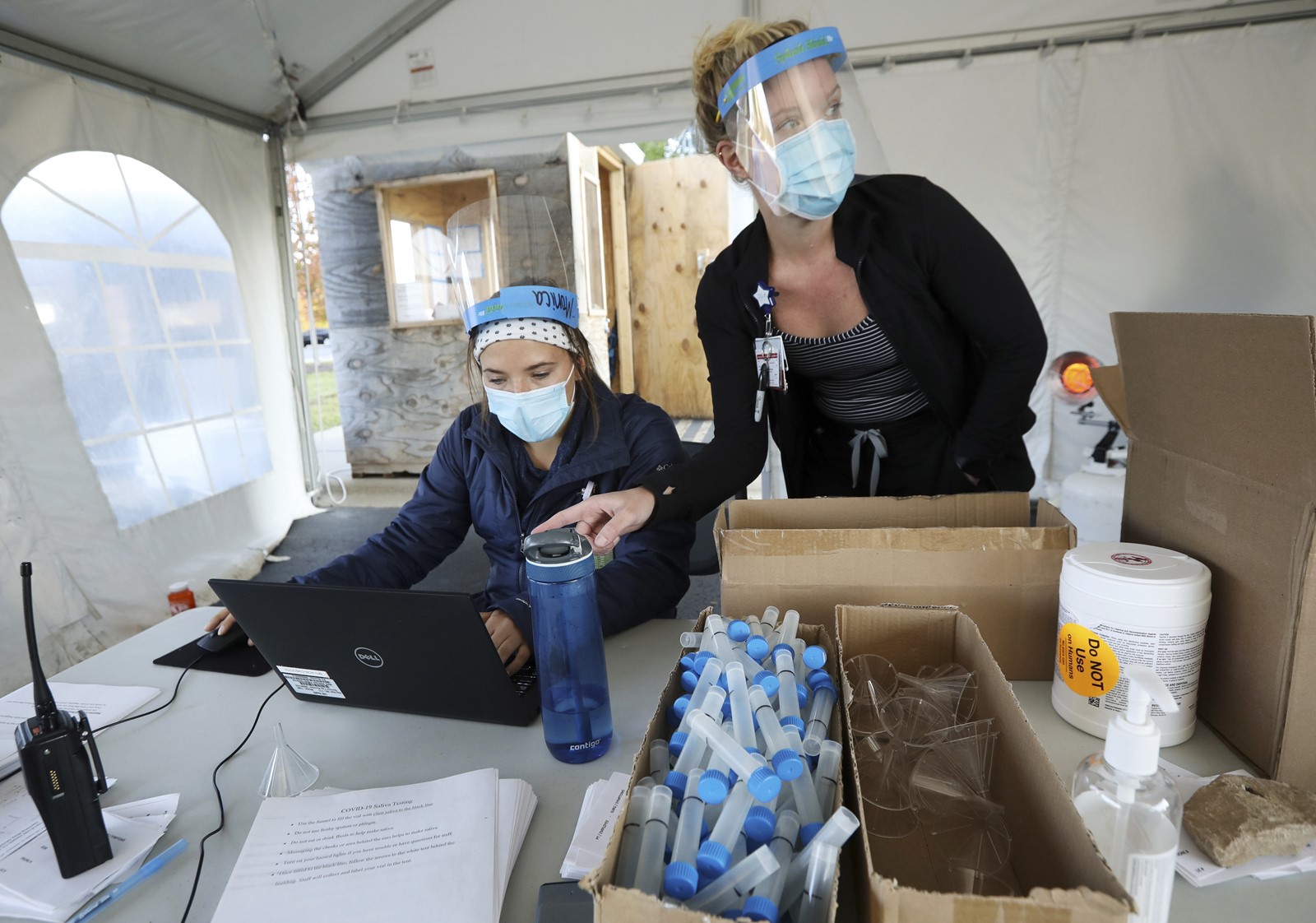 An alarming new surge of coronavirus infections drowned out President Trump’s false claims that the health crisis was “ending,” imperiling his reelection chances as hospitals struggled Wednesday with a rising COVID-19 caseload in key battleground states.

Officials recorded more than 70,000 new infections a day across the country over the last week, more than ever before, with a record number reported in 29 states. As winter approaches and people spend more time indoors, the tally is expected to rise.

Although the pandemic has undercut Trump’s reelection bid since the spring, the latest surge — especially in several Midwestern states — poses special perils for the president, whom voters largely blame in polls for the worsening outbreak and resulting economic upheaval.

With only six days until voting ends, Trump has responded by downplaying the danger and accusing the media of focusing on the contagion to hurt him politically. “Covid, Covid, Covid,” he groused Wednesday on Twitter, insisting that after Nov. 3 “the talk will be how low the death rate is.”

Among the states hardest hit in the current wave is Wisconsin, which Trump won in 2016 but where polls show him now trailing behind Joe Biden, the Democratic nominee. Vice President Mike Pence campaigned in the state Wednesday, although his chief of staff and four other aides recently tested positive for the virus.

Hospitals in Wisconsin are nearing capacity, the state recently saw a record-high number of deaths in a single day, and infections are rising sharply. State health officials urged residents to leave home only when absolutely necessary and warned the crisis would continue escalating.

The virus also is raging in several other hotly contested battleground states that could decide the election, including Iowa, Michigan and Ohio. Biden leads or is closely competing with Trump in those states.

In scathing remarks Wednesday near his home in Wilmington, Del., Biden said Trump had given up fighting the pandemic, accusing the White House of issuing a “declaration of surrender to the virus.”

Following a briefing by the public health experts who advise him, Biden argued that Trump’s refusal to acknowledge reality “is an insult to every single person suffering from COVID-19.”

The former vice president, who spoke shortly before he cast an early ballot, also blasted the Trump campaign for stranding supporters in frigid temperatures after a rally Tuesday night in Omaha.

Several attendees were rushed to hospitals after they waited hours for shuttles to take them to their cars parked miles away.

“It’s an image that captures Donald Trump’s whole approach to this crisis,” Biden said. “He makes a lot of big pronouncements but they don’t hold up. He gets his photo op and he gets out.”

More than 71 million people have voted early so far, or more than half the total of 139 million who voted in 2016, a trend that reflects both intense interest in the election and new voting patterns due to the pandemic.

Trump has insisted that the threat is overblown. Campaigning in Wisconsin on Tuesday, he railed against the state’s coronavirus restrictions — “Open it up,” he demanded — while thousands of supporters, many without masks, packed a speedway in West Salem.

On Wednesday, speaking in Bullhead City, Ariz., he mocked those who wear masks, falsely declaring that California requires a “special mask” even when eating.

“Boy, you know, when you have spaghetti and meat sauce, that mask is not looking...,” he said, trailing off and shaking his head.

He again boasted about his recovery from COVID-19 after he was hospitalized for three nights, and given experimental drugs, early this month. First Lady Melania Trump and their son, Barron, also tested positive in a coronavirus outbreak that swept through parts of the West Wing.

A campaign advisor, who requested anonymity to speak candidly, defended Trump’s remarks as projecting “optimism” because he got better thanks to “new therapeutics.”

One of Trump’s core closing arguments to voters — that he is the better candidate to revive the economy and protect stocks held in 401(k) retirement accounts — also took a hit Wednesday as the Dow Jones industrial average tumbled 943 points. The closely watched stock market index has fallen more than 5% since Monday as the pandemic worsened and congressional talks for a new economic relief package appeared to collapse.

“Expectations that COVID-19 would be under control by now have vanished, and we see stocks falling by another 10-20% from here,” said James McDonald, chief executive of the Los Angeles-based Hercules Investments.

A new Washington Post/ABC News poll showed how Wisconsin’s struggle with the coronavirus — and Trump’s response — has hurt the president’s chances for reelection.

Almost two-thirds of the state’s voters worry that someone in their family will contract the virus, and Biden is leading that group, 75% to 22%. In addition, voters support the state’s restrictions on businesses and public gatherings by a wide margin, 68% to 28%.

Only 39% of voters said they approved of Trump’s handling of the pandemic, and only 31% said they trusted him on the issue more than Biden.

Another Wisconsin poll released Wednesday, by the Marquette University Law School in Milwaukee, showed Biden leading by 5 percentage points. A majority of the state’s voters, 55%, said they were at least somewhat worried about contracting COVID.

The poll illustrates how concern about COVID is affecting people’s votes, even across party lines.

While those groups aren’t huge, the defections from the usual GOP support for Trump are enough to account for a significant share of Biden’s lead in the state.

On Wednesday, Wisconsin’s hospitals were at 85% capacity and “on the brink of extreme strain,” said Ajay K. Sethi, an infectious disease expert at the University of Wisconsin’s Global Health Institute.

He said the state took months to register its first 100,000 cases, and then just a few weeks to double that. “That kind of acceleration doesn’t bode well for the coming months,” Sethi said.

Democrats argue that voters will not forgive Trump’s response to the pandemic.

Although Trump has touted his cheering crowds as evidence of his support, Cecil said that “he is actually hurting himself by traveling the country holding these rallies” and showing he isn’t taking the virus seriously.

The White House contends that Trump simply isn’t getting credit for his leadership, and as evidence the White House Office of Science and Technology Policy released a statement that claimed “ending the COVID-19 pandemic” among the administration’s accomplishments.

“From the outset of the COVID-19 pandemic, the Administration has taken decisive actions to engage scientists and health professionals in academia, industry, and government to understand, treat, and defeat the disease,” it read.

Alyssa Farrah, the White House communications director, acknowledged Wednesday on Fox News that the list of accomplishments was “poorly worded.”