of drought and heat 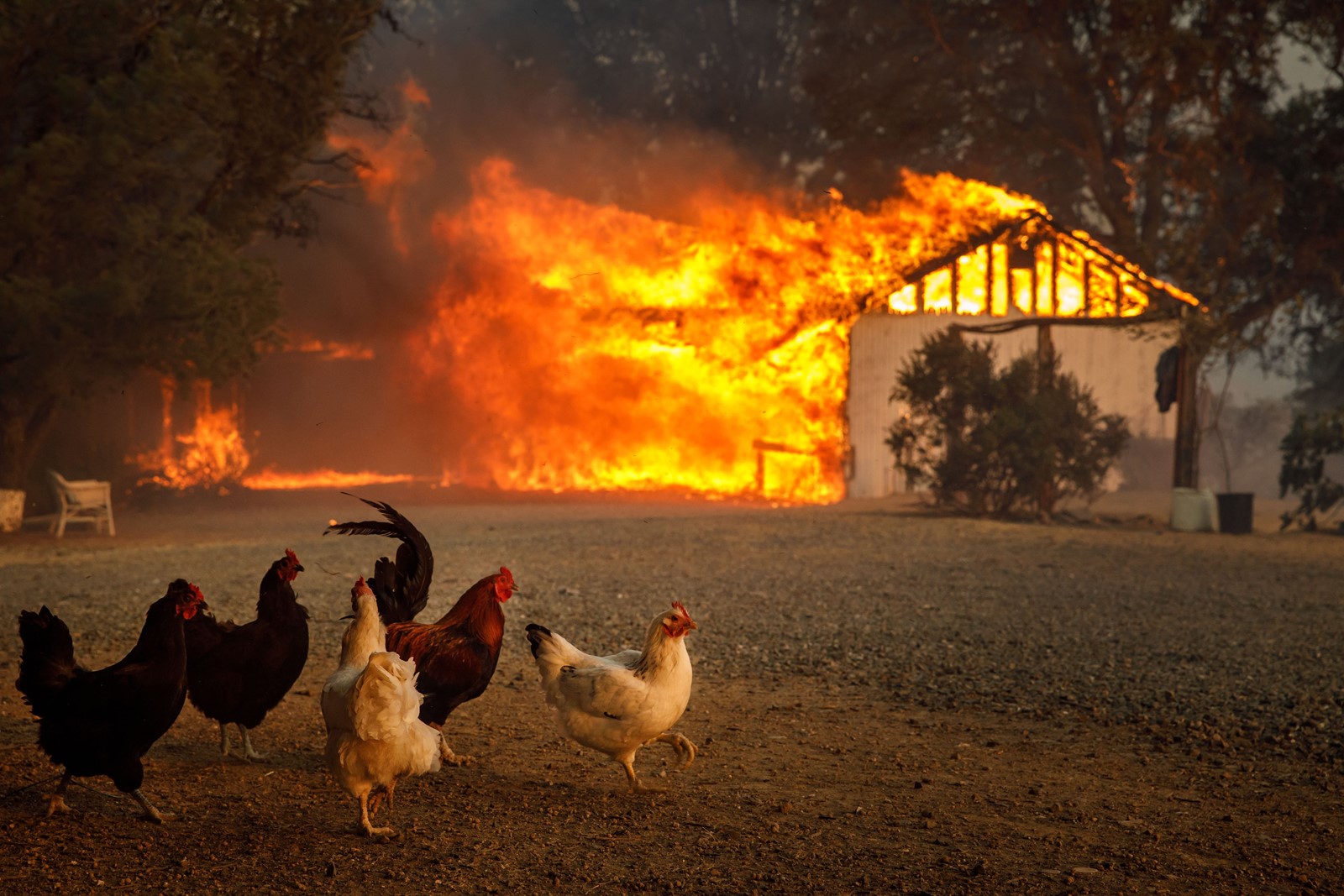 A HOME in Lakeport, Calif., burns Tuesday. In hot weather, some heat can be carried away by water, as moisture in the soil evaporates. But soil with little moisture, as in a drought, leaves the heat nowhere to go. (Photographs by Marcus Yam Los Angeles Times) 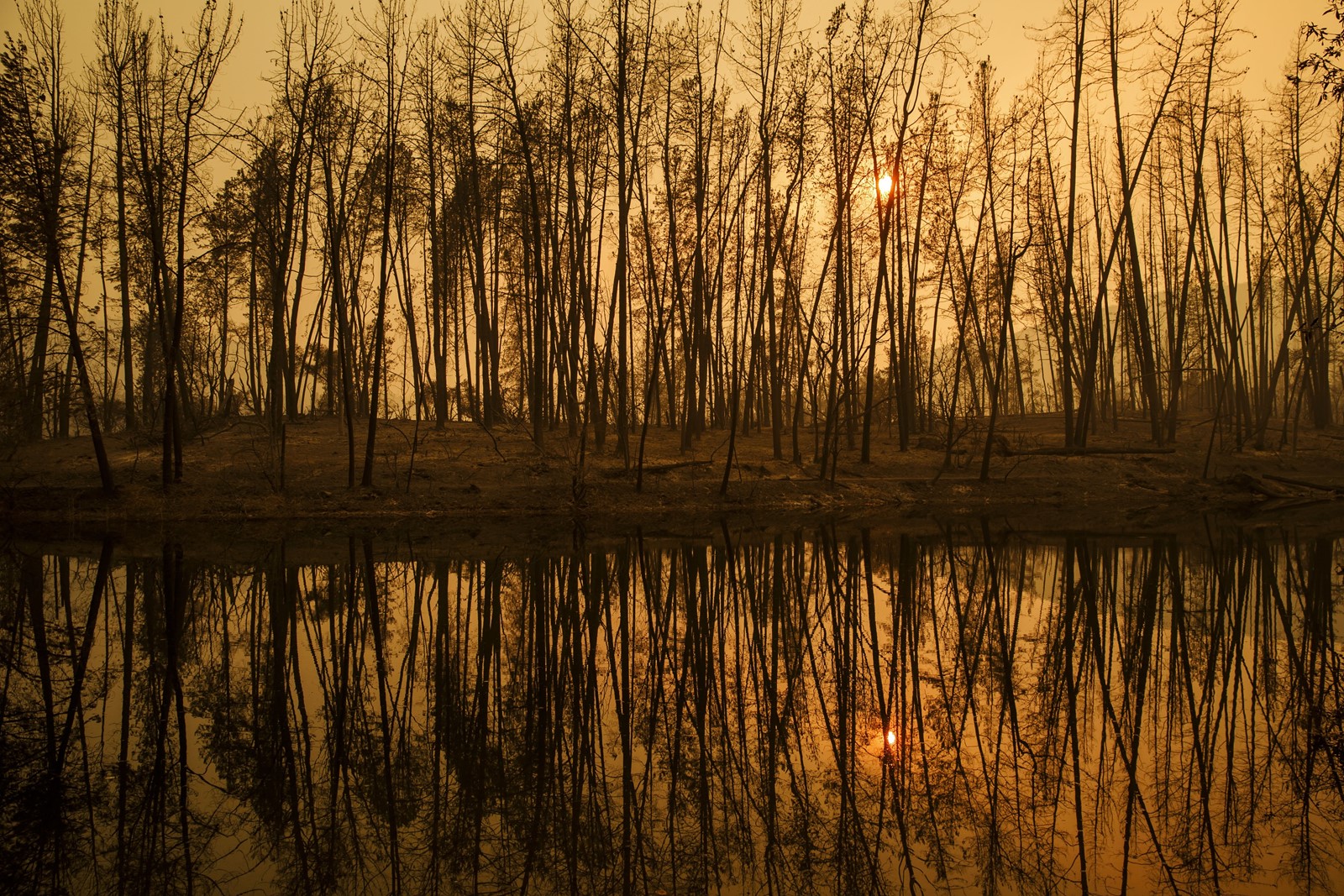 THE SUN SETS among trees burned in Whiskeytown, Calif., near Redding, where the Carr fire has been raging since late July. ()
PREVIOUS IMAGE

A team from UC Irvine that compared temperature changes across the U.S. found that temperatures rise faster in places under drought conditions than they do in places with average climates. This relationship could also raise the risk of concurrent heat waves and wildfires, the researchers say.

As global warming continues its upward climb, the phenomenon described in the journal Science Advances highlights another complex feedback loop that contributes to more extreme weather events — which could have serious implications for human health and safety.

“They talk about the ‘new normal,’ ” said Michael Wehner, a climate scientist at Lawrence Berkeley National Laboratory who was not involved in the study. “The problem of course is that ‘normal’ keeps on changing. But I think it’s fair to say that the new normal is that we’ll have a lot more fires and, as such, a lot more poor air quality days.”

Study leader Felicia Chiang, a graduate student in civil and environmental engineering, said she and her colleagues got aninkling of this as they were comparing temperature increases in the Southwest. Overall, they found there was a 0.6-degree Celsius rise in the average temperature between the early and late 20th century. But when they focused on the drier months in the two periods, the increase was twice as large. In other words, droughts appeared to be getting significantly hotter than they used to be.

“We wanted to expand this analysis to the entire U.S.,” Chiang said. “And we also wanted to explore, what are the drivers of this shift?”

So the researchers expanded their inquiry. They compared temperatures and rainfall from two periods, 1902 to 1951 and 1965 to 2014. They also used projections from climate models to compare the future period of 2050 to 2099 with a historical baseline of 1951 to 2000.

The scientists found that drier periods went hand in hand with greater increases in average temperature in large parts of the United States. The observations showed that in the Northeastern, Midwestern, Southeastern and Southwestern United States, drought-stricken regions warmed more than four times as much as those with average weather conditions. The models backed up the temperature spike in the South.

There may be a fairly straightforward explanation for this phenomenon, Chiang said. When it gets hot, some heat can be carried away by water, as moisture in the soil evaporates. (Human bodies take advantage of this process: We sweat, and as the sweat evaporates it helps cool us down.)

But if there’s less water in the soil because of a drought, the heat has nowhere to go, so it sticks around and the temperature rises.

This leads to a vicious cycle: Drier periods lead to higher temperatures, which further dries the soil, which raises the temperature, and so on. It’s potentially making droughts more severe, and jacking up the risk of heat waves and wildfires during these dry periods.

“It fits into what’s going on in the Western United States right now,” Wehner said.

More than 100 wildfires are burning in states including Alaska, California, Montana and Texas, according to the National Interagency Fire Center. In California, the Ferguson fire has forced the evacuation of Yosemite Valley and the Carr fire has killed at least six people.

Beyond the damage and death that these events can cause, wildfires last year led to poorer air quality across California, Washington and Oregon, and to a lesser extent British Columbia, Wehner said.

“We expect the concurrence of droughts and warm events to physically manifest in more frequent wildfires, reduced air quality, and stressed agricultural crops and livestock,” the study authors wrote.

And if the more extreme wildfires that are supposed to occur only rarely become far more frequent, it can fundamentally alter major ecosystems, Wehner said. In the greater Yellowstone area, for instance, tall, old-growth forests could become a thing of the past because frequent fires may destroy growing trees too rapidly.

It’s also important to take human influences into account, Chiang added. While the observations showed the Northeastern states to be experiencing the same dry-heating effect as the Southern states, the models actually showed some of the Northern states experiencing a relative cooling effect during drought.

This was a surprise to Chiang until she looked further into the research literature. Other work has shown that ramping up agricultural production was linked to cooler extreme temperatures in the Midwest during the summer months. And areas that rely on rainfall instead of irrigation don’t appear to experience this cooling effect. Figuring out whether that’s partly responsible for the patterns they observed in the North will require further study, she said.

Scientists should also study the influence that people have on this vicious climate cycle, Chiang said.

“We need to also consider human activities,” she said. “We’re pumping significant amounts of water into certain places that didn’t have that water before, and that can definitely have impacts.”