After he indicates flexibility for further talks with China, White House says March 1 date is firm. 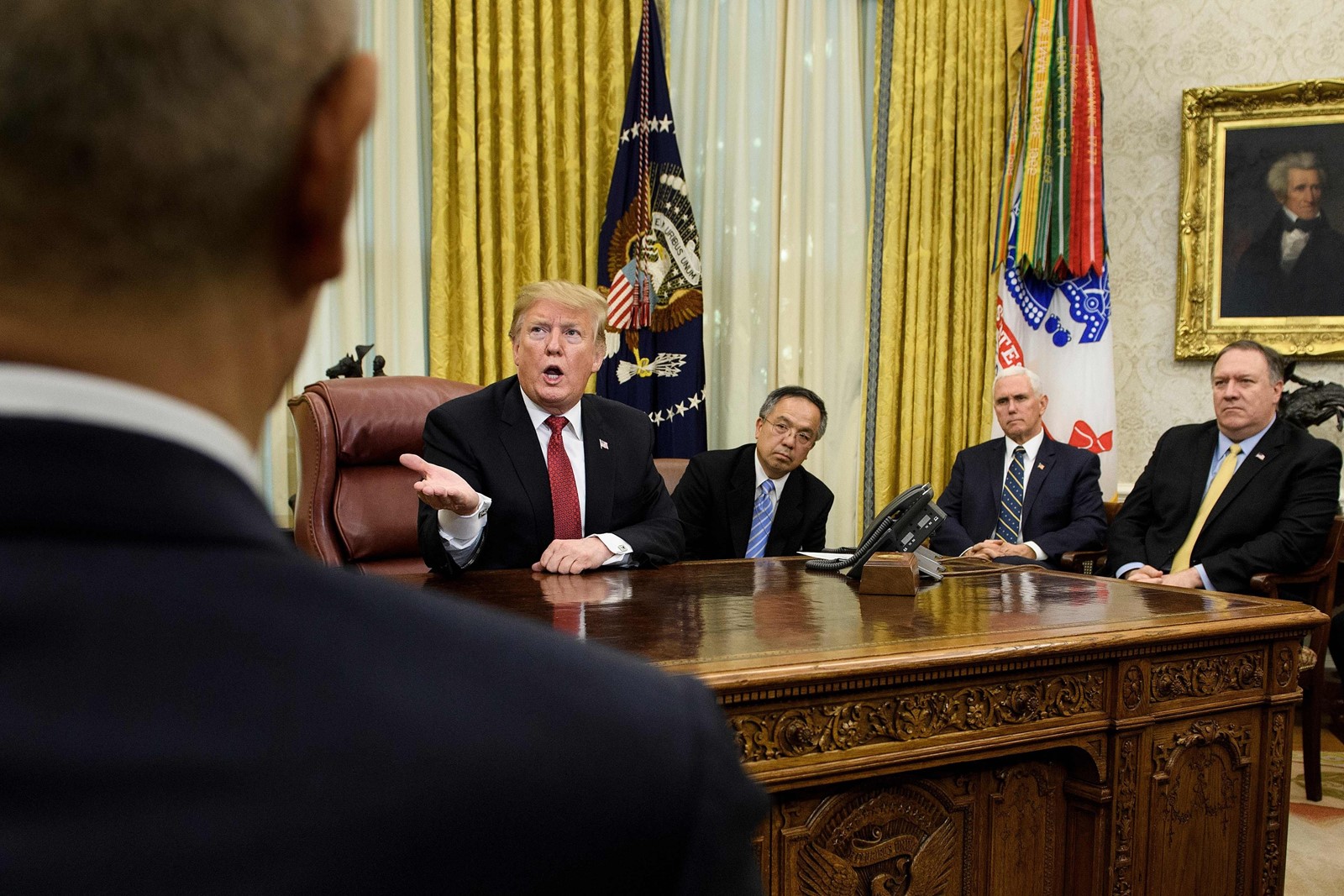 President Trump telegraphed flexibility about his deadline for resolving the trade war with China, saying Thursday that the disputes could be settled only by another face-to-face meeting between himself and President Xi Jinping and that he might be willing to “just postpone for a little while.”

A few hours later, the White House sought to walk back the walkback, putting out a statement referring to the March 1 date for wrapping up trade talks with China as a “hard deadline.”

The seemingly conflicting positions came amid a flurry of tweets and comments as Trump prepared to meet at the White House with China’s vice premier.

In one of the first tweets of the day, Trump expressed hope that a “very comprehensive transaction” could be completed by March 1 — the deadline he’s set for increasing tariffs on $200 billion of Chinese imports from 10% to 25%.

Later, sitting in the Oval Office with the Chinese delegation, who read him a letter from Xi, Trump told reporters that “we haven’t set up a meeting yet,” but “we have made tremendous progress.” China, he said, had agreed to significantly increase its purchases of U.S. soybeans.

“That doesn’t mean there’s going to be a deal,” he said, adding that he wanted to have negotiations largely worked out before he and Xi met. “We’re not at that stage yet.

“We haven’t talked about extending the deadline,” Trump said, adding that he did not think that would be necessary.

Moments later, U.S. Trade Representative Robert Lighthizer underlined that March 1 remains a firm deadline in a meeting with reporters: “At midnight on March 1, tariffs go up,” he said.

Calling the two days of talks between the U.S. and Chinese delegations “very intense,” Lighthizer expressed mild optimism that a deal could be achieved.

But there were also evident signs of confusion. The Chinese delegation’s promise to make a purchase of soybeans, announced to Trump before the TV cameras in the Oval Office, appeared to catch U.S. officials off guard.

Lighthizer and Treasury Secretary Steven T. Mnuchin have been invited to continue talks in China and could go in mid-February to set the table for Trump and Xi to seal a deal before March 1. The U.S. officials have yet to respond to that invitation.

Trump, who relishes the flash and attention that comes with high-profile bilateral meetings with world leaders, could meet with Xi in late February, when he may travel to Asia for a second summit with North Korean leader Kim Jong Un.

So far, no official plans for such a trip have been announced, but a meeting with Kim in Vietnam seems likely.

Trump said he probably would announce plans for the Kim summit next week, perhaps during Tuesday’s State of Union speech.

Trump and Xi last met in December on the sidelines of the G-20 summit in Buenos Aires.

During a working dinner at the end of that summit, the two leaders ratcheted down tensions and Trump agreed not to raise tariffs on Jan. 1, pushing his deadline back two months to allow time for talks to progress.

Now, with about a month left before the latest deadline, Trump sought to create a sense of urgency for what he called “a complete deal.”

But his words seemed to undercut his attempt to pressure China by suggesting that the deadline could be extended once again.

A few moments later, he muddied his message further by saying that he and Xi might simply agree to “do it on paper by March 1,” suggesting that a broad framework of an agreement could be sufficient.

Trump’s trade negotiators have been pushing for a long-term deal that covers a range of issues with China, including resolving the intellectual-property concerns of American companies and securing China’s commitment to buying American goods and services in larger quantities to reduce the U.S. trade deficit.

Trump endorsed those broad goals, even as he indicated he might stop short of achieving them.

“I have to do the real deal,” Trump told reporters. “It would be so easy for me to make a deal with China but it wouldn’t be a real deal.”

According to Lighthizer, making sure the U.S. is able to enforce any agreement is also critical.

“Our objective is to make the commitments more specific, all-encompassing and enforceable,” he said.

In another tweet Thursday, Trump laid out what he wants a comprehensive deal to include: “Looking for China to open their Markets not only to Financial Services, which they are now doing, but also to our Manufacturing, Farmers and other U.S. businesses and industries. Without this a deal would be unacceptable!”

Although a majority of farmers cheered Trump’s tougher approach to China, many have been hurt by the trade war, as retaliatory tariffs have affected exports and caused prices to drop.