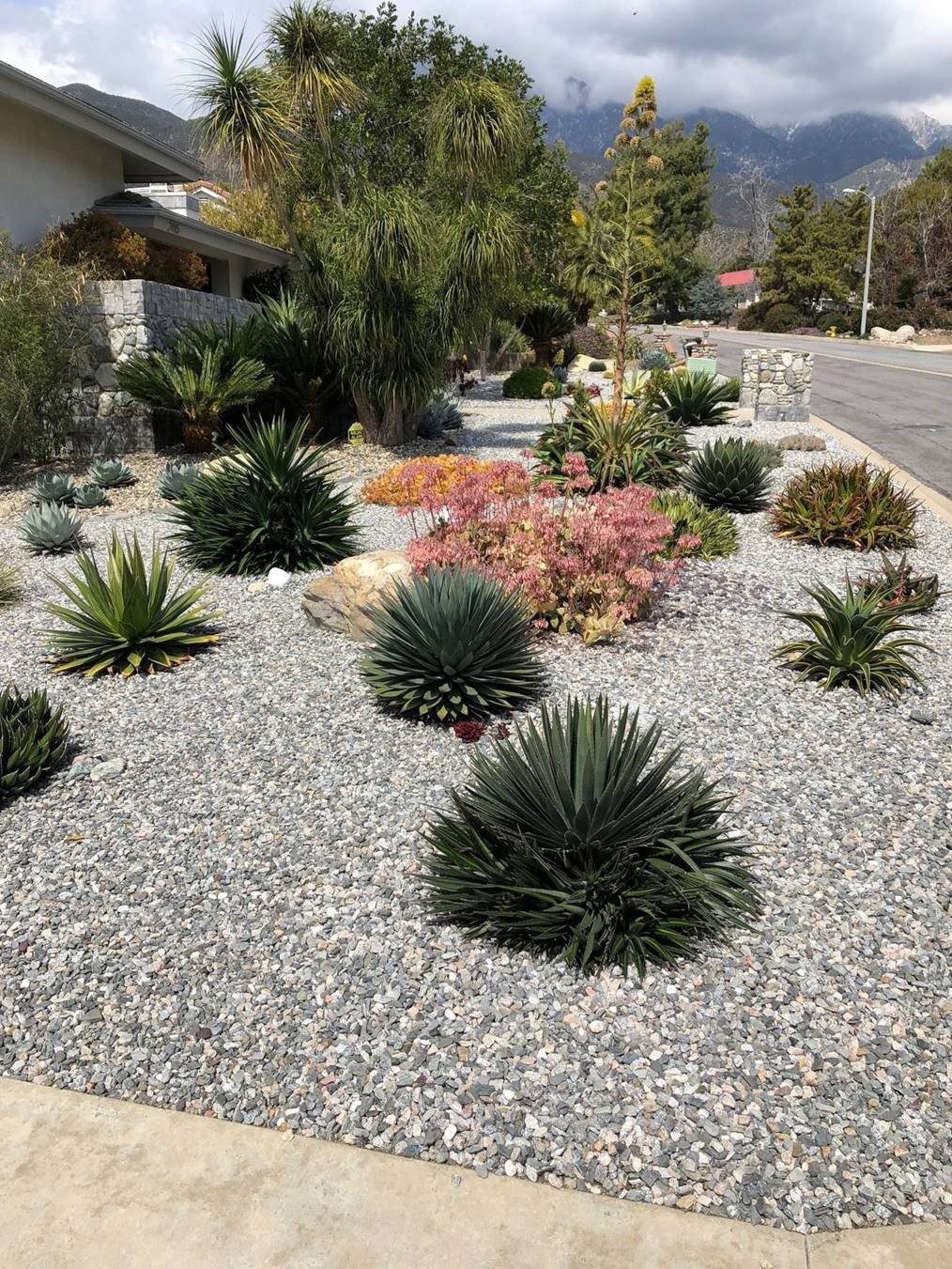 TIM WHEELER ripped out his lawn, above, and added drought-tolerant features including succulents and drip irrigation, at right. (Photographs by Tim Wheeler) 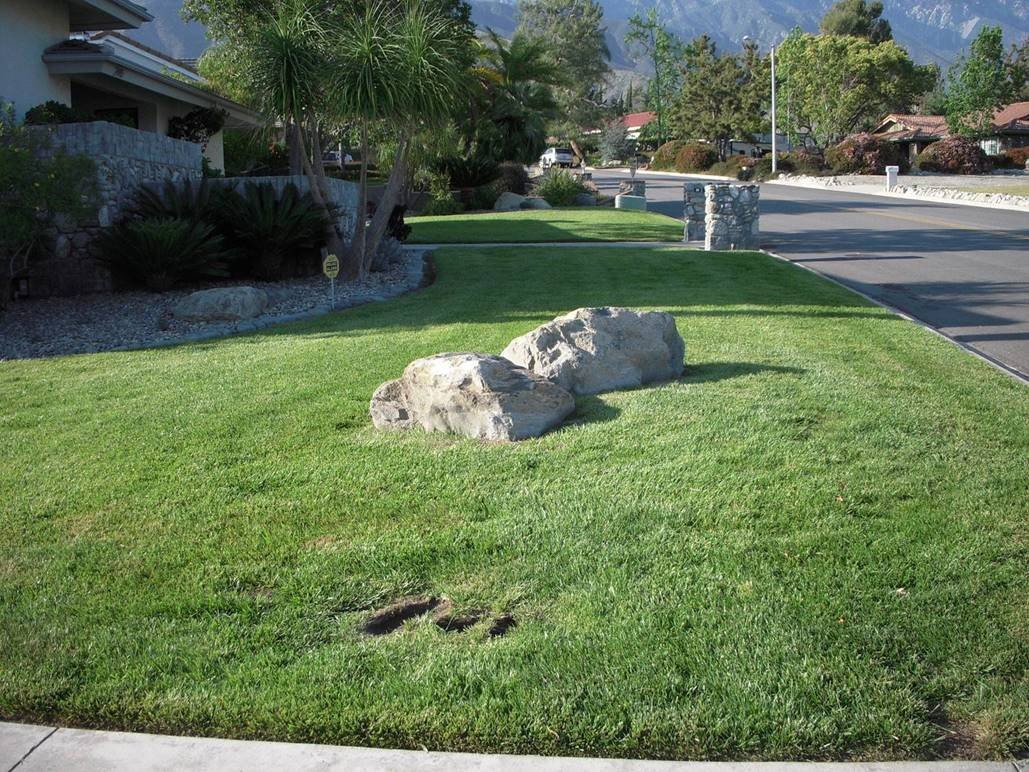 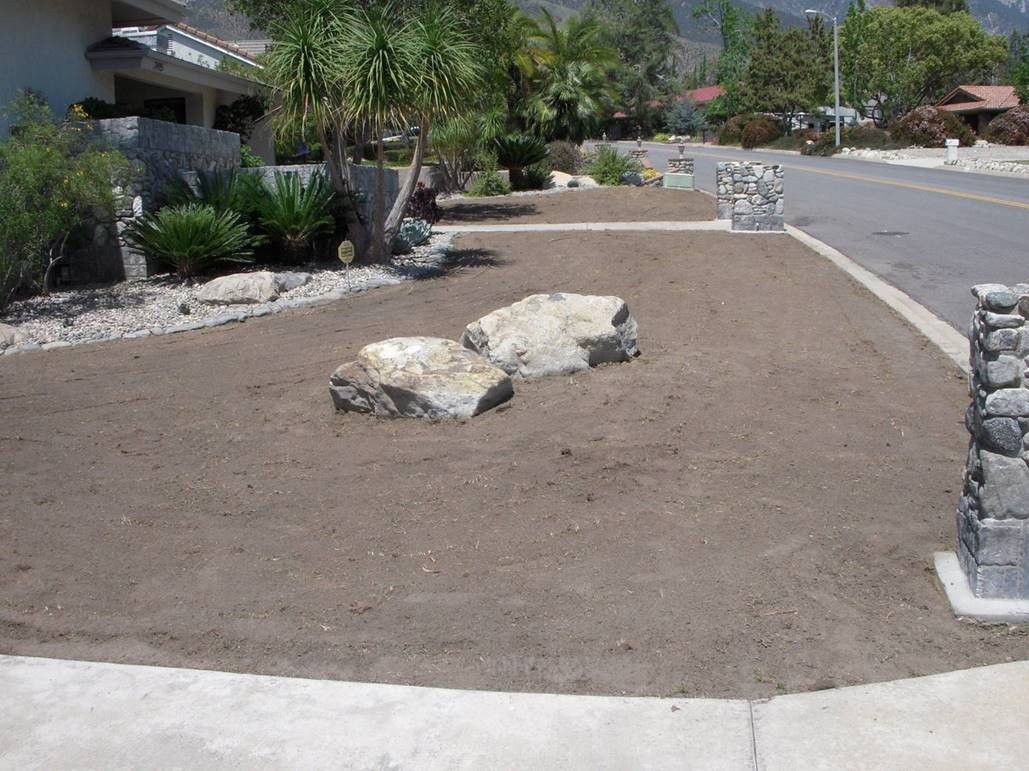 When he decided to swap his front lawn for a drought-tolerant landscape, retired surgeon Tim Wheeler expected to cut his water bill — but he had no idea how drastically.

“Once we got our initial planting in, our water use dropped by 50%,” he said. And not just the portion for the yard — the entire household bill.

Wheeler and his wife, who live north of Upland in San Antonio Heights, had redesigned their home’s interior to a more midcentury style, and then wanted to modernize their landscaping to match. In addition to changing out the ho-hum patch of grass in front, Wheeler said they hoped to conserve water and get ahead of looming restrictions.

Some of the work he did himself, and hired for the rest. In all, he spent about $3,500, plus more for plants. Here’s how he did it:

In April 2014, he contacted his regular lawn-care service “one last time,” and had it remove the front grass for about $300.

He mapped his yard, plotting where to put the new greenery. Then he laid down landscaping fabric, and hired workers to spread a 15-cubic-yard truckload of 1-inch gravel, for about $1,300 in materials and labor. After that, a family friend who is an interior designer and landscaper gave advice on a few plants, Wheeler said, “and I took off from there.”

He attended cactus and succulent shows in Orange County and at the Los Angeles County Arboretum, took gardening classes, including one offered by his local water district, and did research online. Reaching out to groups of water-wise gardeners on the web and social media proved invaluable, especially at , he said.

Wheeler was still working then, so it took him about four months’ worth of weekends here and there to do the planting himself. Home Depot and Lowe’s “often have surprisingly unusual specimens at pretty decent prices,” he said, and he also sourced garden shows and fellow succulent enthusiasts, many of whom gave him cuttings or offshoots of their own plants, called pups.

He also turned to an expert for watering: He spent $1,900 to have a specialist convert his existing sprinkler system to drip irrigation, adding additional lines.

“At first it looked a little sparse, which is true for any properly planted landscape. It took three, maybe four years, before everything grew into its space,” he said. But his research helped him exercise patience. “I knew what was coming and planned accordingly.”

He ended up with 25 different types of agave, as well as sago palm, golden barrel cactus and various species of aloe, echeveria, aeonium, sedum and others. “It looked even better than I thought it would. More lush,” he said.

He advised others mulling a similar change to plan ahead, space plants for their future growth and not their current size, keep anything spiky away from the sidewalk, and anything toxic far from pets and children.

Finally, he urged, make use of other gardeners’ help.

One day a neighbor with a PhD in zoology was walking by. “He went around my yard naming every single succulent,” Wheeler said.

Since then, they’ve traded numerous cuttings, and Wheeler has also paid it forward with others making the same switch he did.

“Actually, the lady across the street took a few of my agaves,” he said.