A divided Congress is getting little done 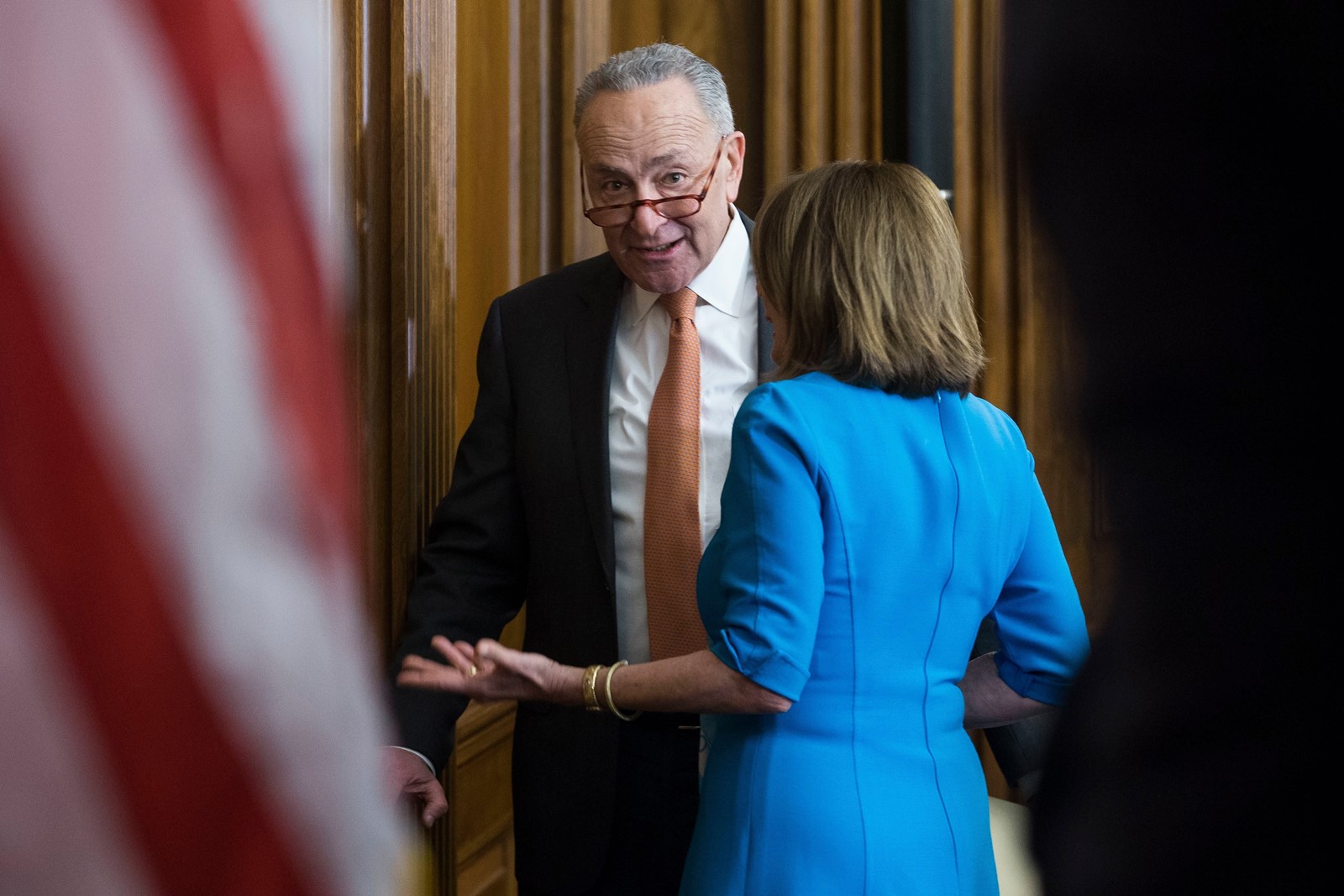 SENATE MINORITY LEADER Charles E. Schumer and House Speaker Nancy Pelosi in the Capitol. It’s not unusual for legislative action to slow down when congressional power is split between the parties. (Michael Reynolds EPA/Shutterstock)
PREVIOUS IMAGE

One modifies pay for podiatrists working for the Department of Veterans Affairs. Another renames a vets center in North Ogden, Utah. A third revises the charter of the National Future Farmers of America Organization.

McConnell grinned at the characterization that House bills were going nowhere in the Senate.

“I think that’s pretty accurate, yeah,” he told The Times. “They’ve been busy here in the first part of the Congress sending us things that have — shall I say — no potential in the Senate. And I understand that there’s a new majority. They want to lay out, you know, how they feel about things.”

Democrats flush with a new House majority after nearly a decade in the minority are sending over a rash of bills most political watchers believe have little chance of passing the Senate, such as universal background checks for gun purchases, net neutrality, climate change, congressional ethics, expanding voter access, raising the minimum wage and more.

“Public sentiment will weigh in, and the Senate will see … that many of the pieces of legislation that we have passed or [are] about to pass are 70% to 80% bipartisanly and nonpartisanly supported by the American people,” Pelosi said. “And [Republicans] will either act upon the legislation or be accountable to the public for why they do not.”

She noted that both chambers were essentially at a standstill in January during the longest government shutdown in U.S. history.

Of the more than 4,000 bills filed before Congress left for a two-week spring recess, the House has passed 188. The Senate has passed about 100, including many Republican priorities that the House won’t likely take up.

President Trump vetoed one, which would have overridden his executive order declaring a national emergency at the southern border. In total, just 12 bills have passed both chambers and been signed into law.

Two of the largest-scale bills that have become law include a major lands package that has been in the works for years, and pay for federal workers not paid while the government was shut down in December and January.

Meanwhile, historically bipartisan issues that have been considered by the Senate, like billions of dollars in disaster aid — including for California fire victims — have failed.

The Senate has been largely focused in the last few months on approving nominees to fill vacancies within the Trump administration, something that doesn’t require input from the House.

Since the beginning of the year, the Senate has confirmed more than 200 nominees to positions in the executive branch, circuit courts and district courts, including confirming Californian David Bernhardt to be the new Interior secretary last week.

McConnell called confirming the nominations, especially the judicial positions, part of his legacy.

“The impact on the courts has been enormous and positive for the country — young men and women that we’ve been confirming as rapidly as possible who believe the job of a judge is to follow the law,” McConnell said.

Senate Republicans accused Democrats of dragging their feet on nominations by requiring the full 30 hours of available debate time to pass for each, and they recently changed the chamber’s rules to reduce the time senators get to consider many positions.

“He is hanging his entire hat on putting all these judges in,” Schumer said, “and I don’t think history is going to look kindly on either the way he’s changed the rules to do that [or], more importantly, how the Senate has done so little on the major issues of the day when the American people are crying out.”

It’s not unusual for legislative action to slow down when congressional power is divided between the parties. In 2011, when Republicans took control of the House and Barack Obama was president, only nine new laws had passed by April 15.

Both McConnell and Pelosi indicated they saw areas for common ground ahead.

“We’ll find a way to do some business together,” McConnell said.

Pelosi said she was heartened by talk of bipartisan agreement on infrastructure and lowering prescription drug prices. For years, legislative leaders have said those two topics could be a place the two parties could work together, but actual movement on both has been difficult.

McConnell said he, Pelosi and Trump had begun talking about a deal to raise discretionary spending limits.

McConnell also said that Congress needed to address immigration in a meaningful way, another topic that has proved to be intractable in Washington for years.

“The American people have given us divided government again. They do that frequently. As all of you probably know, we’ve had divided government more often than not since World War II, so we need to get used to the fact that the power is divided,” McConnell said. “We’re working our way toward having rational bipartisan discussions of things that can only be solved together.”