‘A patriot and servant’

Tributes and condolences from around globe pour in for 41st president 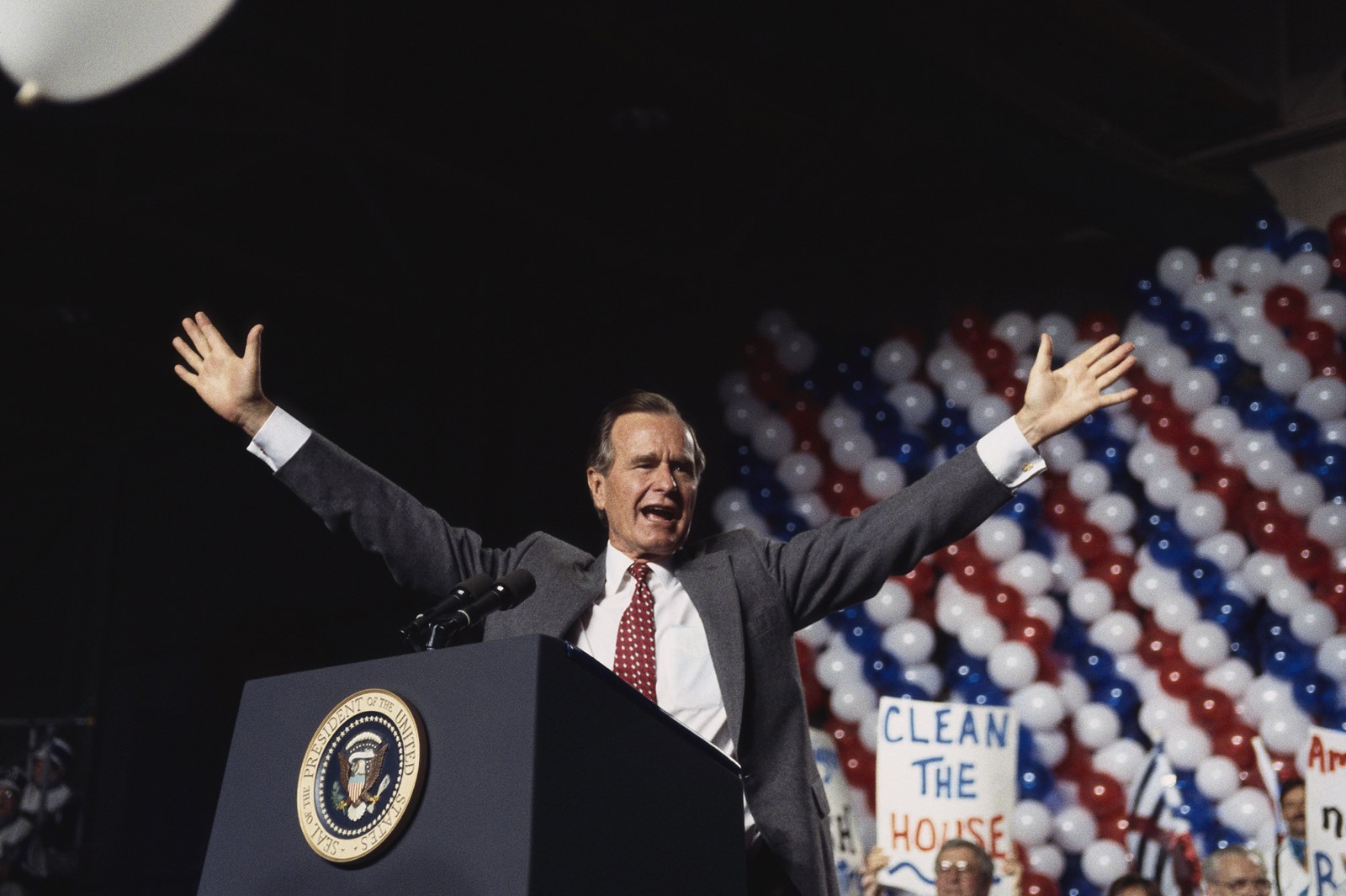 AN ‘ESSENTIAL AUTHENTICITY’President George H.W. Bush delivers an address during his unsuccessful reelection campaign in 1992. He was defeated by Democrat Bill Clinton, a youthful and energetic Arkansas governor who was as verbally poetic as Bush seemed tongue-tied. (Wally McNamee Corbis ) 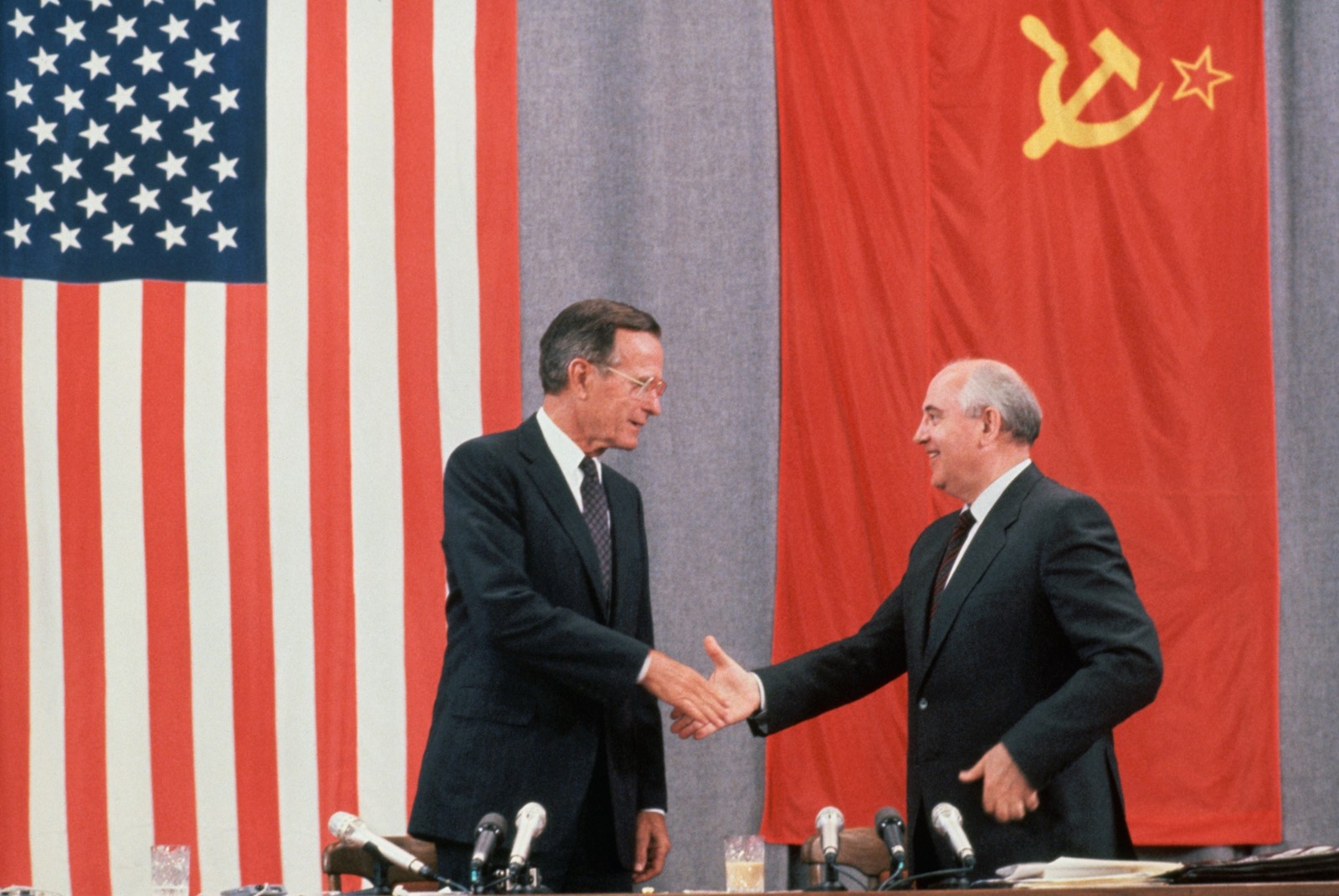 George Herbert Walker Bush was a gentleman hero, a shrewd diplomat, a rich man who walked with grace and privacy through a world of tyrants and fears at a moment in history when the Cold War crumbled and America’s might and confidence were quickly challenged by gathering dangers at home and abroad that would undo his presidency.

The news of his death late Friday spurred an outpouring of condolences and reminiscences from across the nation and around the globe in tribute to his decades of public service, steely pragmatism and unpretentious manner.

President Trump, who was at the G-20 summit in Argentina, said in a statement Saturday: “Through his essential authenticity, disarming wit, and unwavering commitment to faith, family, and country, President Bush inspired generations of his fellow Americans to public service — to be, in his words, ‘a thousand points of light’ illuminating the greatness, hope, and opportunity of America to the world. … President Bush always found a way to set the bar higher.”

Trump designated Wednesday as a national day of mourning, putting aside a long-running feud with the Bush family and praising the former president for having “led a long, successful and beautiful life.”

German Chancellor Angela Merkel, in a telegram of sympathy, said her nation “is deeply indebted to George H.W. Bush.” She called it “a stroke of good fortune for German history that he was president when the Cold War was winding down and an opening for reunification came about.”

Bush, who died at 94, will lie in state in the Capitol Rotunda beginning Monday.

The 41st president of the United States was a blue blood with quirky charm and a sharp temper, the scion of an age when the truisms of World War II confronted a long Cold War, the aggression of Saddam Hussein, the rise of Middle East terrorism, the specter of a troubled economy and the rancorous political divisions that would see Donald Trump rise to the pinnacle of Bush’s Republican Party.

Bush embodied the ideals and stoicism of a nation. His Navy plane was shot down in World War II, but not before he delivered its bombs. He served two terms as vice president under Ronald Reagan that ushered in a new conservatism, which would help elect Bush president in 1988 and witness the fall of the Berlin Wall. But his inability to resonate with voters and his aloofness to the faltering U.S. economy cost him reelection. Less than a decade later, though, he and his wife, Barbara, watched as their son George W. Bush was sworn in as the country’s 43rd president.

Bill Clinton, who defeated Bush in 1992, wrote in a Washington Post op-ed piece that Bush’s “friendship has been one of the great gifts of my life. From Indonesia to Houston, from the Katrina-ravaged Gulf Coast to Kennebunkport, Maine — where just a few months ago we shared our last visit, as he was surrounded by his family but clearly missing Barbara — I cherished every opportunity I had to learn and laugh with him. I just loved him.”

Former President Obama, who recently visited Bush in the hospital, said in a statement that “America has lost a patriot and humble servant in George Herbert Walker Bush. While our hearts are heavy today, they are also filled with gratitude. Our thoughts are with the entire Bush family tonight — and all who were inspired by George and Barbara’s example.”

There seemed a little kid in Bush; sometimes petulant, other times full of wonder, as in the smile that broke across his face when, on his 90th birthday, he parachuted out of a plane over Kenne-bunkport. His phrasing could be terse, “Read my lips,” and unwittingly funny, “I do not like broccoli.” Along with former Presidents Clinton and Carter, Bush became an elder statesman doing humanitarian work and at times acting as a voice of reason amid the country’s increasingly bitter politics.

But with the rise of neocons and tea party candidates and a media landscape saturated with tweets and derision, the era that produced Bush is over. The quiet has been replaced by the clamor, compromise shoved aside by animosity; so much so that Bush, as he glided through his last years in a wheelchair, the brim of a ball cap shadowing his face, appeared more like a portrait than an Instagram post.

Reactions to his death spoke to his patriotism and a sober world view honed by his time in the intelligence realm — he was a director of the Central Intelligence Agency in the 1970s — and as president, when in 1990-91 he sent U.S. forces to the Middle East to defend Kuwait against Iraq’s army.

Bush, who as vice president years earlier had calmed the nation after President Reagan was seriously wounded in an assassination attempt, told Americans in January 1991 that “five months ago, Saddam Hussein started this cruel war against Kuwait. Tonight, the battle has been joined. Our goal is not the conquest of Iraq. It is the liberation of Kuwait.” The U.S.-led invasion defeated Hussein’s forces within 100 hours.

The former president was revered in Germany for supporting the reunification of East and West after the collapse of the Soviet Union. As an architect of the “new world order,” he won gratitude as well as honorary citizenship in Berlin, after he persuaded British Prime Minister Margaret Thatcher and French President Francois Mitterrand not to block reunification despite deep-seated fears that Germany could rise again and threaten the heart of Europe.

Merkel was a scientist in East Germany and entered politics only by chance during the tumult and freedom that followed the collapse of communism. “He was a great patriot and statesman,” she said of Bush, praising him for “recognizing the importance of this moment in history” while having the “courage and skill of a statesman to lead Europe through the upheaval that paved the way for a new era.”

Former Soviet leader Mikhail Gorbachev said that he and Bush “had a chance to work together during the years of tremendous changes. It was a dramatic time that demanded great responsibility from everyone. The result was an end to the Cold War and the nuclear arms race.”

Gina C. Haspel, director of the CIA, said of Bush: “We’ve lost a great champion of the Agency. … As a heroic Navy pilot in the Second World War, a skilled statesman who deftly managed the collapse of the Soviet Union and liberated Kuwait from Saddam Hussein’s aggression, and a committed citizen who remained engaged in public service throughout his later years, President Bush exemplified the virtues of patriotism, duty and compassion.”

Bush largely served in the shadows of the Reagan White House. In time, however, his quiet competence won over many of the Reagan cadre, who had doubted his adherence to the conservative cause. As Bush entered his second term as vice president and as his anticipated candidacy for the presidency drew closer, pressure increased for him to establish his own positions. Bush, a former oilman who prized loyalty, resisted.

His determination to subordinate himself, combined with mannerisms that sometimes seemed effusive and contrived, led Bush’s critics to deride him as a wimp and an aging preppy. Cartoonist Garry Trudeau once depicted the vice president as having “put his manhood in a blind trust,” and conservative columnist George Will, noting Bush’s efforts to win the favor of conservative groups, likened him to “a lapdog.”

As the 1988 presidential election approached, a new obstacle to Bush’s ambitions rose in the form of the administration’s Iran-Contra scandal and suspicion about his possible role. Though it required him to confess being “not in the loop,” the vice president denied any knowledge of the deal to trade arms to gain the release of hostages held by Iran, and his candidacy weathered the storm.

Bush knew the bounds of his charms, the limits of his oratorical flourish. “I’ll try to be fair to the other side,” he said in his acceptance speech after defeating his Democratic opponent, Massachusetts Gov. Michael S. Dukakis — adding, jokingly: “I’ll try to hold my charisma in check.” The address, in contrast to the aggressive acquisitiveness that characterized the Reagan era, sounded the theme of compassion. In its most memorable phrase, Bush called for “a kinder and gentler nation.”

Dan Quayle, Bush’s vice president, whose verbal gaffes and policy slips made him a running punch line, told the Indianapolis Star on Saturday that “if you look at it historically, he [Bush] was the greatest one-term president of all time.”

While confronting a changing world, a rising deficit and a troublesome American economy, Bush’s presidency resurrected the nation’s deep wounds of racism and slavery when he nominated Clarence Thomas, a conservative black judge, for the Supreme Court. The nomination riveted the country and veered into a messy morality play as Anita Hill, a black woman, accused Thomas of sexual harassment. Speaking to a room of white senators, Thomas said he was a victim of a “high-tech lynching.”

Thomas was confirmed. But the specter divided much of the country, foreshadowing deepening partisan politics and a resurgence for women’s rights that would rise in fury decades later in the battle over the high court nomination of Brett M. Kavanaugh.

America was slipping beyond Bush’s era. After 12 years of Republican presidents, the nation was seeking new vitality, bolder directions. The Democrats nominated Clinton, an Arkansas governor who was as verbally poetic as Bush seemed tongue-tied and energetically youthful at a time when the incumbent seemed out of sync with a rapidly shifting country.

In a moment that to many crystallized the campaign, a young woman in the audience for one of the fall’s presidential debates asked Bush and Clinton how the national debt had affected their lives. Bush seemed almost nonplussed and unable to frame an answer. Clinton exuded empathy as he asked the woman about the challenges the economy posed for her family. The embattled president never recovered.

At the end, Bush received 38% of the popular vote, a shocking outcome 21 months after the swift triumph in Iraq had made many view his reelection as inevitable. No incumbent had done so badly since William Howard Taft in 1912.

But the Bush name endured through his son George, a two-term president who handled Iraq much differently than his father. In the span between the father’s presidency and the son’s, America had become more polarized amid anxiety over global terrorism and the widening gap between the rich and everyone else.

After leaving Washington and the presidency, Bush and the former first lady retired to Houston. He wrote and he traveled — and supported the political aspirations of his sons George and Jeb, the latter of whom served as governor of Florida from 1999 to 2007. Barbara Bush died in April.

In a letter he wrote to the two sons in 1998, when both were running for governor of their states, which he later released in a book, Bush expressed resentment of the “far right,” which, he said, “will continue to accuse me of ‘Betraying the Reagan Revolution’ — something Ronald Reagan would never do.” And he counseled them to ignore stories that portrayed him as a president “who had no vision and who was but a place holder in the broader scheme of things.”

“I am content with how historians will judge my administration — even on the economy. I hope and think they will say we helped change the world in a positive sense,” he wrote. “So read my lips — no more worrying.”