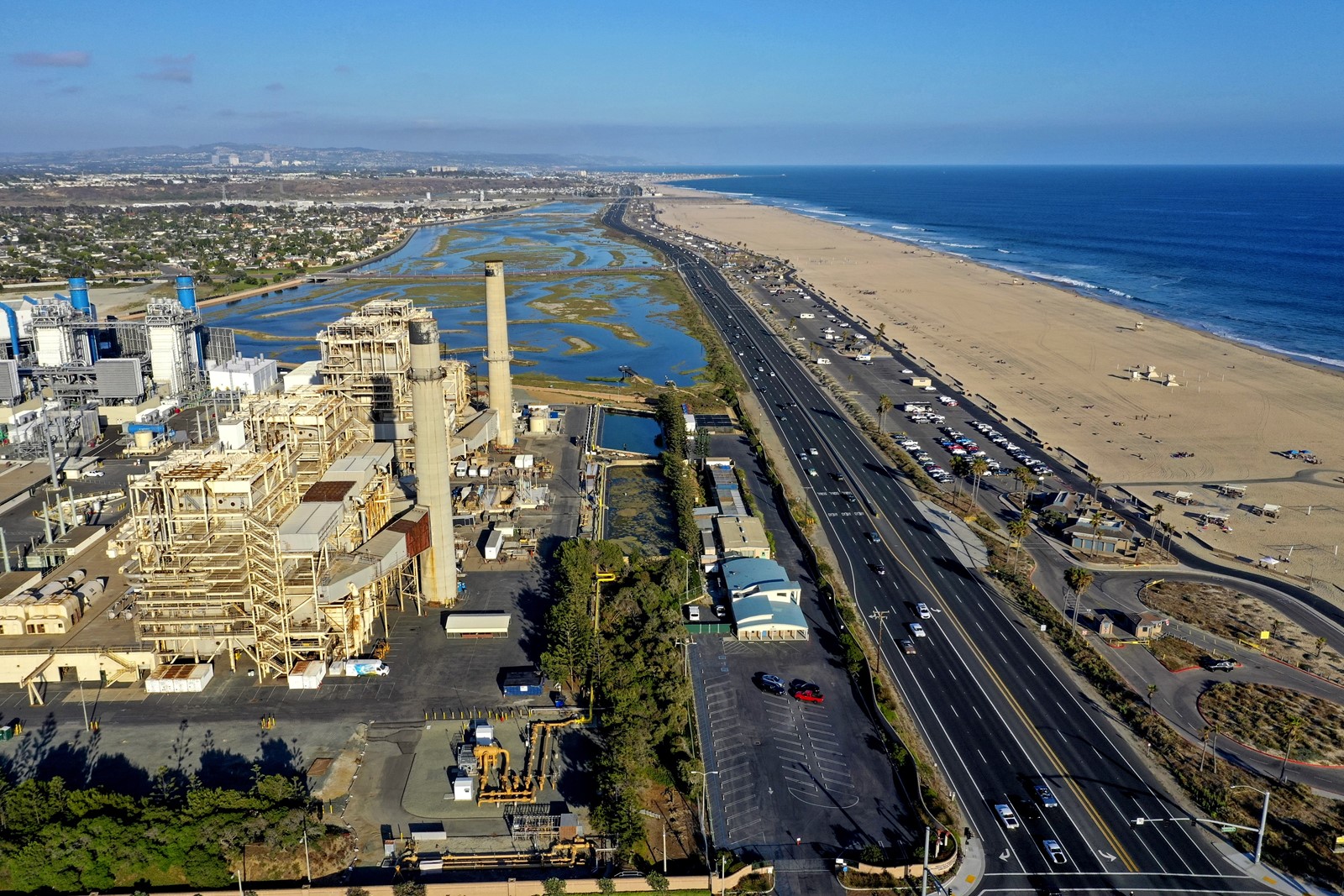 State officials threw a lifeline to four fossil-fueled power plants along the Southern California coast, deciding the facilities are still needed to provide reliable electricity even as they contribute to the climate crisis.

Tuesday’s vote by the State Water Resources Control Board to let the gas plants keep operating past the end of this year followed brief rolling blackouts over two evenings last month, as a heat wave caused air conditioning demand to soar, and California found itself short on electricity supplies.

Energy regulators are still investigating the causes of the power shortage. But they said allowing the coastal gas plants to stay open a few more years would help prevent more outages as California continues its transition to cleaner energy sources — an ironic solution given that climate change almost certainly exacerbated the recent heat wave.

The four facilities were supposed to shut down by Dec. 31, 2020, under a regulation requiring coastal power plants to stop using ocean water for cooling, a process that kills fish and other marine life. But Tuesday’s decision granted a three-year extension to natural gas plants in Huntington Beach, Long Beach and Oxnard, and a one-year extension to a Redondo Beach plant.

The vote was unanimous, even as one water board member expressed frustration that energy regulators didn’t do a better job planning for gas-plant closures that have been scheduled since 2010.

“It’s important for us to have our deadlines mean something, and that’s especially true when there’s a decade of runway time to achieve them,” said board member Laurel Firestone, who was appointed by Gov. Gavin Newsom last year.

The Public Utilities Commission and the California Independent System Operator began warning last year that the state might face power shortages on hot summer evenings, when electricity demand remains high even as solar farms and rooftop solar panels stop generating electricity. That prediction seemed to come true on Aug. 14, when the Independent System Operator ordered utilities to implement rolling outages for 75 minutes, and again on Aug. 15, when the energy shortfall lasted 20 minutes.

However brief, the blackouts ignited a political firestorm. Newsom called them “unacceptable and unbefitting of the nation’s largest and most innovative state.” And some policymakers expressed concern that a repeat performance could put the state’s clean energy progress in jeopardy.

“We need to pay attention to the integrity of the electrical grid. Because if we do not, we are going to lose this whole green thing we’re doing. We’re going to lose the public,” Patrick O’Donnell, a state assemblyman from Long Beach, told the water board Tuesday. “When people go to turn on their light switch, they need to know that those lights will go on.”

“If we go too fast, if we truncate this process, it’s going to blow up in our face,” he added.

For climate advocates, the biggest risk is moving too slowly, not too fast.

Scientists have found that averting the worst effects of climate change will require humanity to cut planet-warming greenhouse gas emissions roughly in half over the next decade. In California, emissions fell just 14% between 2007 and 2017, the most recent year for which data are available.

Americans are currently experiencing the consequences of just a small amount of global warming, not only hotter heat waves but also worsening wildfires in California and across the West, more destructive hurricanes on the Gulf Coast and a pandemic the likes of which has been made more likely by rising temperatures.

The strongest opposition to Tuesday’s decision came from elected officials in Redondo Beach, who had already bargained state officials down to a one-year extension for the local gas plant but had hoped for no extension.

Nearly 22,000 people in Redondo and neighboring Hermosa Beach live within one mile of the AES Corp.-owned facility.

Residents said they were sick of being forced to breathe hazardous air pollutants, especially during a pandemic in which weakened lungs might make people more susceptible to COVID-19. Locals also cited the black smoke that occasionally spews from the plant, and jet-engine-like noises that sometimes accompany start-up.

“I have lived four-tenths of a mile from this belching, smelling, loud plant. And I go to the doctor every six weeks, and my lung capacity is going down,” Melanie Cohen told the water board. “I’m begging you to listen to the people of Redondo.”

State law requires California to get 60% of its electricity from renewable sources such as solar panels or wind turbines by 2030, and 100% from zero-emission sources — a broader definition that could include hydropower and nuclear — by 2045. Last year, California was up to 32% renewable electricity and 55% zero-emission electricity, data released this week show.

But 34% of California’s energy came from natural-gas-fired power plants in 2019. Figuring out how to replace that power — especially during the post-sundown hours — is one of the biggest challenges facing state officials as they work to reduce emissions and to show other states and nations that fighting climate change and a thriving economy can go hand in hand.

Energy regulators are working on bridging the gap.

Last year, the Public Utilities Commission ordered electricity providers to add 3,300 megawatts of new power capacity, most of which is expected to be lithium-ion batteries than can store solar power for use at night.

But that’s a small fraction of the energy storage the state will ultimately need. And the batteries will take a few years to build, which is why the utilities commission and other energy agencies asked the water board to grant a deadline extension for the four coastal gas plants.

Luis Amezcua, a senior campaign representative with the Sierra Club, said the Public Utilities Commission needs to order even more clean energy purchases — and not just to make sure the coastal gas plants can shut down by the new deadlines, but also to replace the Diablo Canyon nuclear power plant, which is scheduled to begin shutting down in 2024.

Amezcua also knocked officials at the Independent System Operator and the Public Utilities Commission for pointing fingers in the wake of last month’s blackouts rather than taking action.

“This is a pattern that we’re seeing with state agencies, that they’re trying to cast blame on others when it’s really everyone that needs to be doing their job,” Amezcua said.

The state water board’s approval of three-year extensions for gas plants in Huntington Beach and Long Beach, both of which are owned by Virginia-based AES Corp., was relatively noncontroversial. AES chose to comply with California’s ban on “once-through cooling” by converting some generators at both sites to air-cooling technology, meaning fossil-fueled electricity production probably would have continued for years or decades regardless of Tuesday’s decision.

In Oxnard, city officials grudgingly agreed to support a three-year extension for the Ormond Beach gas plant in exchange for the facility’s owner, GenOn Energy Inc., pledging to set aside $25 million to pay for tearing down the plant.

The debate in Redondo Beach has been much more contentious.

AES recently sold the site to a developer who hopes to build retail and commercial space along the waterfront. But with support from the buyer, AES pushed the water board for a three-year extension for the gas plant — a lease on life that Redondo officials estimated would be worth more than $100 million in revenue to the company.

The water board approved a one-year extension, satisfying neither side. But the debate might continue in court. During public comments preceding the vote, lawyers for Redondo Beach suggested the city might sue the agency, saying it had failed to do a proper analysis under the California Environmental Quality Act of the harm to marine life that will occur if the gas plant keeps operating, a claim water board officials rejected.

Redondo officials also pointed out that the California Coastal Commission issued a “notice of violation” to AES earlier this year, telling the company it was illegally drying up six acres of resurgent coastal wetlands that have persisted at the power plant site despite being paved over decades ago. The city suggested the Coastal Commission could force AES to shutter the gas plant if the company keeps pumping the wetlands, making the facility a poor “insurance policy” for keeping the lights on in California.

Lisa Krueger, president of AES United States, said the company has provided the Coastal Commission with studies showing “there is virtually no impact to the presumed wetlands due to the operation of our electrical vault pumps.”

“We fully expect this matter to be resolved and have no impact on plant operations,” Krueger said in an email.

The Los Angeles Department of Water and Power is also planning to shut down three seawater-cooled gas plants in the L.A. area, known as Harbor, Haynes and Scattergood, over the next decade.

Although it’s not yet clear how the DWP will replace those facilities, the utility currently has enough power on hand that it didn’t have to resort to rolling blackouts during the recent heat wave. Los Angeles actually supplied thousands of megawatt-hours of surplus electricity to the rest of the state, helping to minimize the need for outages.