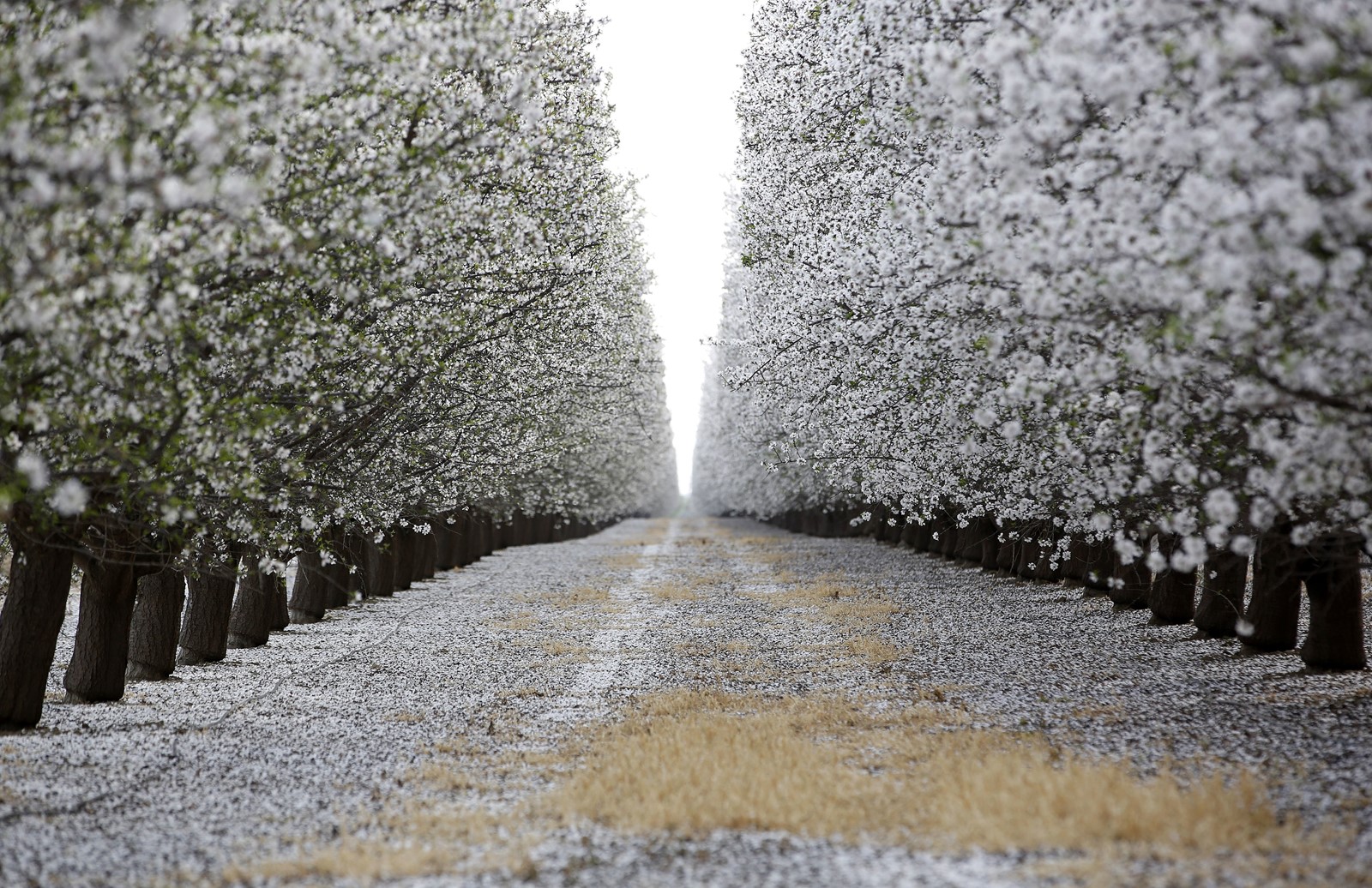 CALIFORNIA’S nearly 7,000 almond growers supply 82% of the world’s almonds. The Almond Board of California says the industry generates about 104,000 jobs in the state. Above is an orchard in Firebaugh. (Rich Pedroncelli Associated Press) 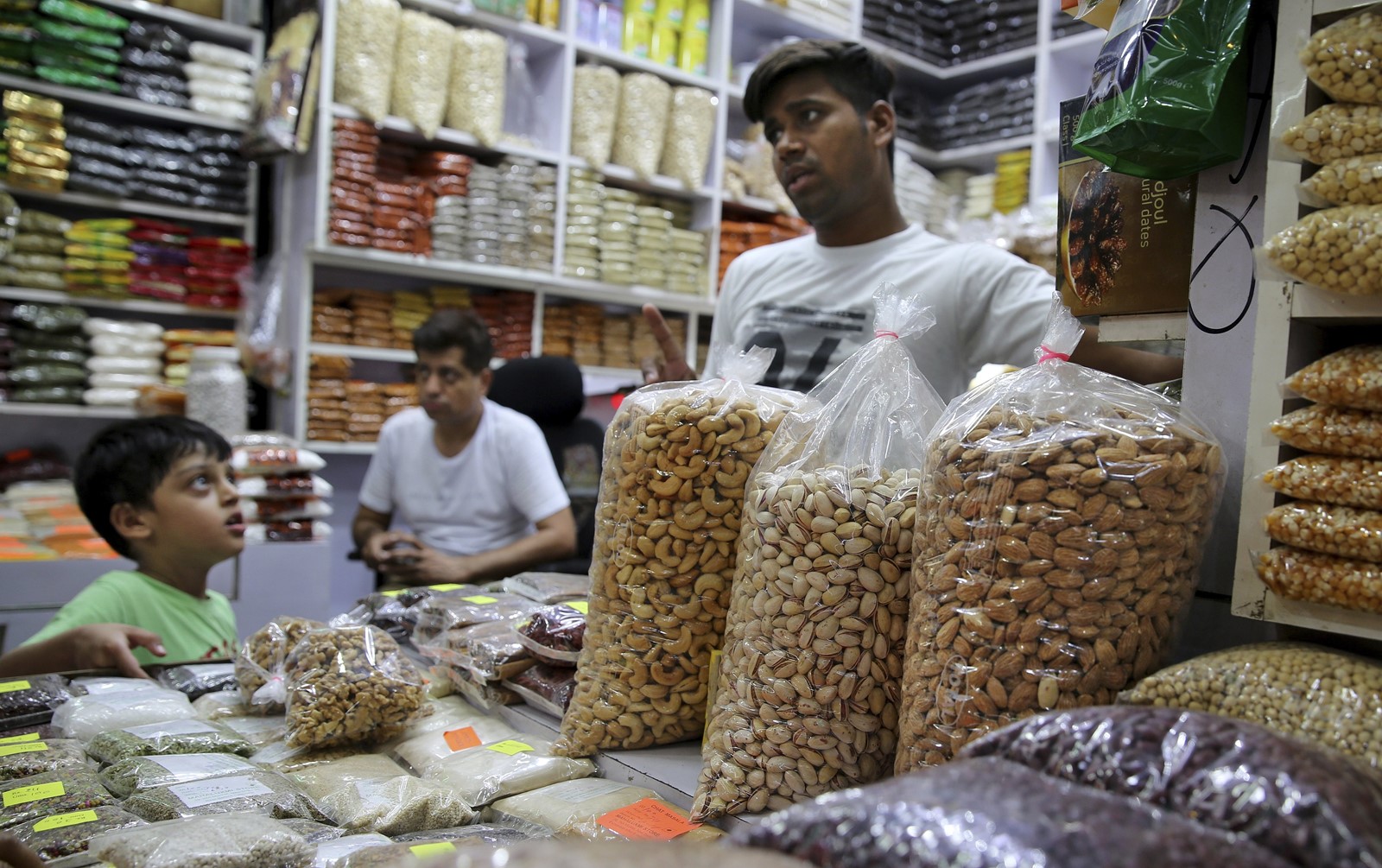 INDIA this month imposed tariffs on almonds and 27 other U.S. products. Above are California almonds at a store in New Delhi. (Altaf Qadri Associated Press)
PREVIOUS IMAGE

Along large swaths of California’s lush Central Valley, almonds in their fuzzy hulls blow in the wind on thousands of acres of orchards. Thousands of miles away in India, customers browse the nut sections of busy street markets and grocery stores in search of the best almonds to use in curry dishes, health drinks, ice cream and many other recipes.

Now the future of that market is uncertain. This month, India imposed tariffs on almonds and 27 other U.S. products, including apples and walnuts, in retaliation for the United States ending India’s preferential trade status. Those tariffs, which took effect June 16, come on top of significant tariffs China placed on almonds last year.

“We can deal with market disruption in one country, but to have it in multiple countries is a real challenge,” said David Phippen, a partner of Travaille & Phippen Inc., a farm and processing company in Manteca, northwest of Modesto.

California supplies 82% of the world’s almonds and has almost 7,000 growers. The Almond Board of California estimates the industry generates about 104,000 jobs in the state, and the effect of the tariffs might ripple outward.

India is such an important market that the almond board, whose members engage in market research and promotion overseas, has an office in New Delhi with a $6-million annual advertising budget.

“That doesn’t sound like a large number, but India was an important alternative to exports that would’ve gone into China,” said Julie Adams, president of the almond board. “It’s difficult to know what the long-term effect of [the tariffs] will be.”

The hit from China’s tariffs was much harder: That country imposed 50% tariffs on U.S. almonds in an escalating trade war.

Exports to China decreased by about one-third, according to the almond board.

Although India is one of the world’s largest consumer markets, it also has huge income disparities; hundreds of millions of its people live in poverty. Even a small increase in cost could have a large ripple effect on what people buy.

Still, other sellers say Indians are so passionate about almonds that they will figure out a way to deal with price increases.

“Anyone who needs almonds will buy no matter what the price,” Delhi grocer Virender Kaneja said.

For California farmers, most immediately the tariffs mean planning difficulties as the harvest season approaches.

For example, some may need to take on more of the shipping costs to make up for the increased prices, which will be negotiated in the contracts. The handlers then may absorb the increased costs or force growers to accept less for their crops.

To cope, growers may cut down on spending on equipment and fertilizer, perhaps making the choice to forgo replacing a tractor or other big-ticket item.

If the Indian tariffs slow the flow of inventory, as happened after the Chinese tariffs, the capacity of storage facilities may be stretched.

“From a grower perspective, we’re along for the ride,” said Jake Wenger, whose family has grown almonds on Wenger Ranch in Modesto for four generations.

Secretary of State Michael R. Pompeo is in India this week, meeting with officials as tensions between the two countries grow over trade and tariffs.

The trip is focused on Iran, but U.S. Rep. Josh Harder (D-Turlock) has asked Pompeo to raise the almond tariff issue.

Some growers worry that if California almonds get too expensive, buyers will look elsewhere.

“They can buy other nuts or seeds, or if they’re preparing a nut mix, they can lower the amount of almonds in that mix,” Phippen said.

Countries may also turn to other producers, such as Australia, whose free-trade agreement with China enables it to replace U.S. almonds that now carry tariffs.

Ultimately, the almond industry will need to make inroads in other markets, which is no small task.

“It takes so long for us to build relationships to market our products,” said Sara Neagu-Reed, associate director of the California Farm Bureau Federation’s federal policy division.

Still, no one is panicking yet. California’s annual export of almonds to India is valued at about $650 million, according to the U.S. Agriculture Department and the California Department of Food and Agriculture, but the state tallied $4.5 billion in foreign sales in 2017. The USDA valued U.S. almond exports to China and Hong Kong at about $549 million in 2017-18.

In just over a month, the nuts will be harvested and trucked to hulling facilities for processing.

“It’s pretty amazing and gives you pride as a grower when you think about something that’s making its way all over the world,” Wenger said.

In recent years, drought has been the biggest challenge for almond growers, and farmers noted that they have become accustomed to market fluctuations and cite the strong, worldwide demand for almonds as reason for optimism.

The almonds at Wenger Ranch are part of this year’s record crop of 2.5 billion pounds, up from about 2.3 billion pounds last year. Most of those almonds are already committed to contracts, so Wenger isn’t worried for now. It’s the future that’s in the air.

“We can’t do this every year,” he said. “Long term, there has to be a solution to settle this.”