Schiff makes a case for himself 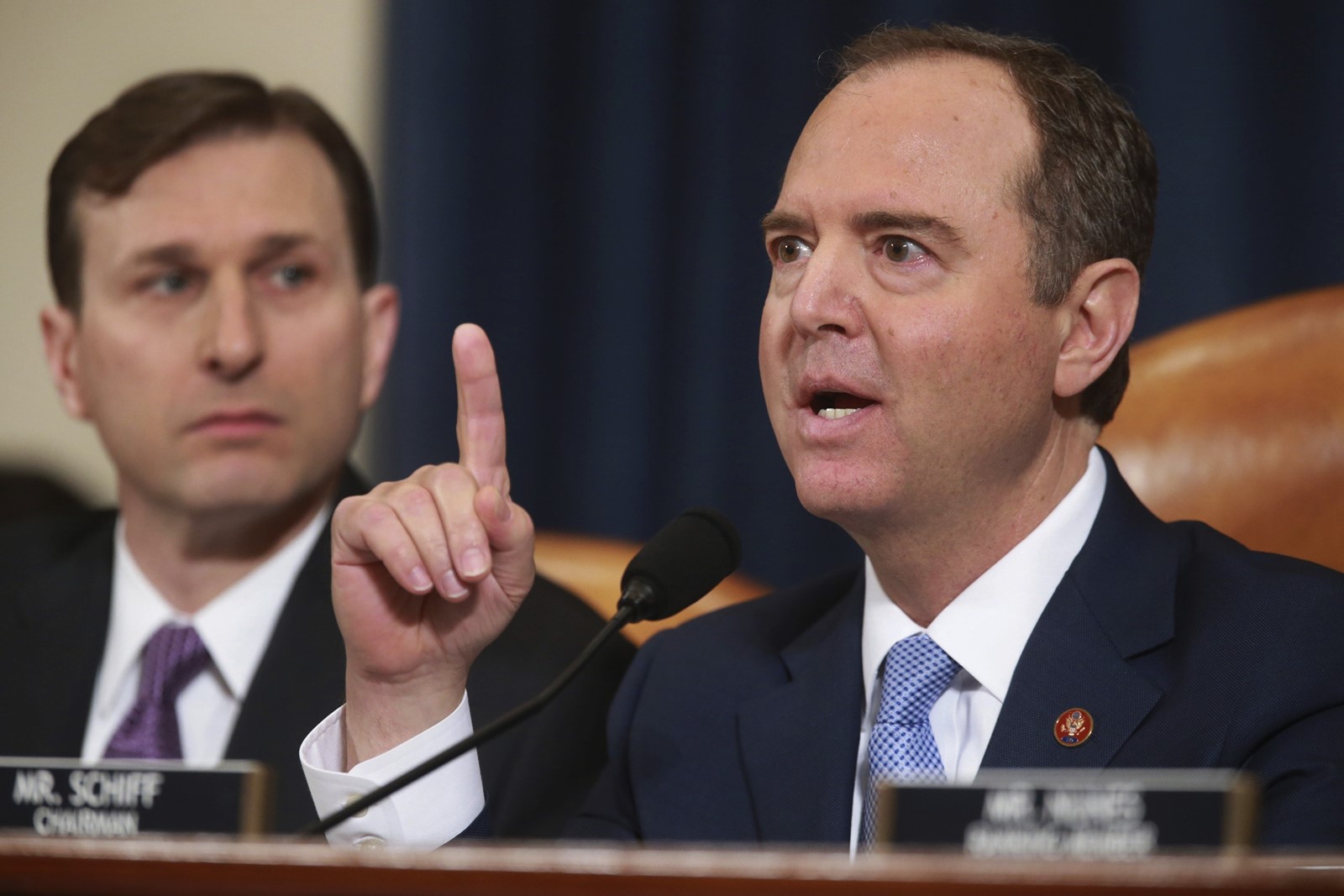 ADAM B. SCHIFF (D-Burbank), chairman of the House Intelligence Committee, has taken on essentially the role of special prosecutor in the Ukraine scandal. (Kirk McKoy Los Angeles Times)
PREVIOUS IMAGE

The effort to impeach President Trump still has months to run, but already has produced at least one clear winner: Rep. Adam B. Schiff has emerged from two weeks of public hearings as a rising star among Democrats, one with enhanced power to aid his House colleagues even as he bedevils the president.

With no special counsel involved in investigating Trump’s actions toward Ukraine, Schiff, a federal prosecutor before he won his Burbank-based congressional seat, has taken the role of lead inquisitor and public face of the probe. He’s the Kenneth Starr of the Trump impeachment — or to use the comparison he would prefer, the Leon Jaworski, special prosecutor during Watergate.

Republicans from Trump on down accuse Schiff of unfairness and bias. His fellow Democrats, however, have heaped praise on the way he kept Republicans at bay and maintained control during the impeachment hearings while generating enough news to keep the inquiry — and his name — in headlines for weeks on end.

“Most members of Congress from Los Angeles have a very low profile,” said Democratic strategist Rose Kapolczynski, noting the dozens of lawmakers who compete for attention in Southern California. “That all changed in the Trump era for Adam Schiff.”

Even before the hearings got underway, Schiff had emerged as one of the Democrats’ leading figures. He’s the top House Democratic fundraiser this year — bringing in $4.4 million through the third quarter, according to federal filings.

Schiff hasn’t had a serious election challenge since his first race in 2000, giving him latitude to spread that money widely. So far, he’s given to 44 vulnerable freshmen. Pelosi also tasked him with leading the fundraising for the “frontliners,” the freshman members who face the most electoral risk next year.

Schiff has helped those members even more with his management of the probe into whether Trump tried to strong-arm Ukrainian officials into helping him battle his domestic political rivals.

When the inquiry began, many Democrats feared — and a lot of Republicans hoped — it would follow the path of the Republican effort in 1998 to remove President Clinton based on Starr’s charge that he lied about sexual contact with a White House intern. A majority of the public rejected that effort, and it became increasingly unpopular as it wore on, harming the GOP.

That hasn’t happened this time. Polls show the impeachment inquiry has changed few minds — the country remains closely divided on whether to remove Trump from office. But Democrats have emerged more unified and have suffered no backlash, vindicating the decision by Pelosi, with whom Schiff is close, to give him and the Intelligence Committee the lead role.

Pelosi and Schiff share a similarly cautious approach that has sometimes frustrated colleagues on the party’s left but has won praise from Democrats in more conservative districts whose jobs would be on the line if the inquiry were viewed as overly partisan.

Schiff has long aspired to higher office, but has been stymied by the difficulty of using a position in the House as a springboard in a state as big as California. In 2015, when he thought about running for the Senate seat being vacated by Sen. Barbara Boxer, a USC-Dornsife Los Angeles Times poll found only 19% of California voters recognized his name.

Now, a Senate vacancy might not be his only route upward: His role in the impeachment hearings has built a case among House colleagues that he could one day succeed Pelosi as speaker.

“Certainly if he wanted to throw his hat into the ring, I think he’d have a great deal of support,” said Rep. Jackie Speier (D-Hillsborough). “He’s obviously become a mega fundraiser and is known around the country.”

Several other Democrats have made louder overtures for the job, which is not expected to open up until after the 2020 election at the earliest. And House Democrats, keen on diversity, might balk at electing a white male — and another Californian — as Pelosi’s successor. But the impeachment process has significantly improved Schiff’s prospects.

“I have personally seen and heard nothing but praise for him from the Democratic establishment,” said Margaret L. Taylor, a Brookings Institution scholar who previously worked for Senate Democrats.

Schiff himself is tight-lipped about any such speculation. In an interview shortly after last week’s hearings ended, he said he hasn’t thought beyond the investigation.

“I have no idea,” he said. “I’ve literally been saying to myself every day, I just need to get through the day.”

Democratic praise for Schiff is matched by his dramatically lowered stock among Republicans, who once considered him relatively bipartisan.

Trump and Republicans such as Rep. Elise Stefanik of New York have used their opposition to Schiff as a rallying cry for their own fundraising.

“It’s great to be in the majority,” he added, sarcastically. “From time to time, the tyranny of the majority does work.”

Indeed, Schiff went into the inquiry with clear hopes of blunting Republicans’ ability to divert the proceedings as they were able to do in other high-profile congressional hearings this year, such as those with former special counsel Robert S. Mueller III or former Trump campaign manager Corey Lewandowski.

Through hours of hearings stretched across five days, Schiff sat stone-faced as Republicans sought to disrupt his plans, staring straight at witnesses or toward the back of the hearing room, seldom even looking at Rep. Devin Nunes of Tulare, his GOP counterpart on the panel.

He did muster a smile when Nunes handed control of the microphone back to Schiff at one point while warning parents to put their children to bed before the chairman spoke.

“I was glad we were able to maintain decorum even though my colleagues made for some very unpleasant listening from time to time,” Schiff said in an interview after the hearings ended.

In the interview, Schiff refused to say whether he has made a final decision about impeachment, but left little to the imagination.

“We are going to have to make a decision about whether we’re prepared to say the kind of conduct that has been demonstrated in these hearings is compatible with the office of the presidency,” he said. “Are we willing to accept that kind of flagrant misconduct?”

The committee is preparing a report on its findings to pass along to the House Judiciary Committee, which would be empowered to draft an impeachment resolution on which the full House would vote, likely in late December.

Even as the inquiry leaves his panel, the spotlight is likely to remain on Schiff. He’s widely expected to be the Democrats’ lead messenger on impeachment through a House vote and as a leader of the House’s case when a trial is conducted in the Senate.

Schiff refused to speculate on his future role, saying it would be up to Pelosi.

One possibility is for him to present the case to the Judiciary Committee as Starr did in 1998, although he would probably face pointed questions from Republicans about his and his committee’s interactions with the whistleblower whose anonymous complaint kicked off the scandal.

Republicans have consistently criticized Schiff for indicating early on that his committee had not had direct contact with the whistleblower. In fact, the person did speak to a member of the committee’s staff before filing the complaint.

The staff member advised the whistleblower to get an experienced lawyer and follow the process set out in federal law, Schiff subsequently said, admitting that he should have made that clear from the outset.

Trump has also repeatedly attacked Schiff for his words in a September hearing in which the congressman recited a fictionalized version of the call between Trump and Ukrainian President Volodymyr Zelensky, using the tone of a Mafia boss.

While the president has denounced that as a lie, Democrats chalked it up as a minor misstep, a mere “blip” as one lawmaker described it.

Still, Schiff has embraced the enmity from Trump, who once dubbed him “Little Pencil-Neck Adam Schiff.”

His campaign website has taken to selling pencils as a fundraising gimmick.

The inscription offers a promise: “This pencil neck won’t break.”