In run-up to primary, Republicans are neck and neck after Trump endorses underdog. 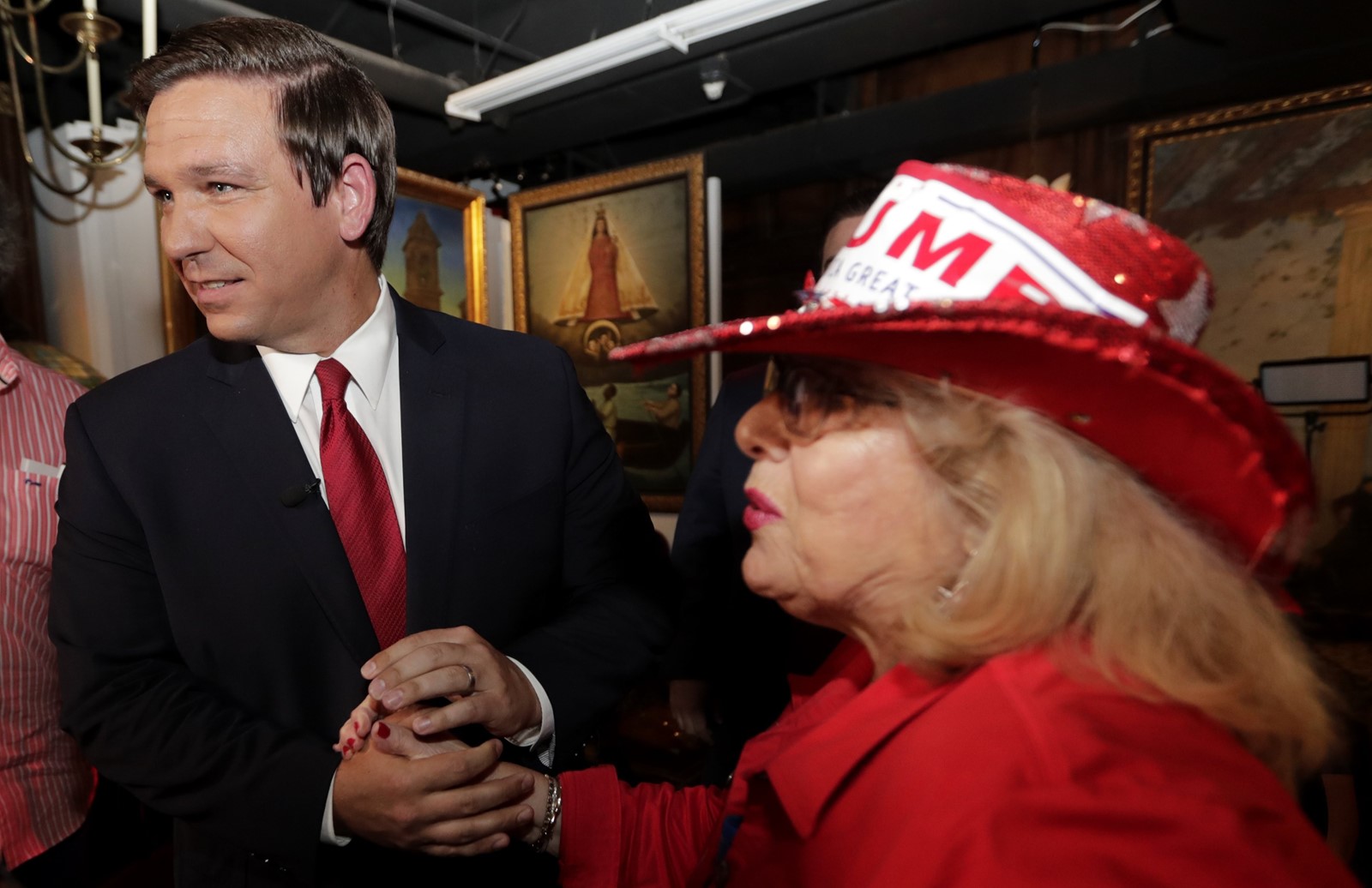 When Adam Putnam stepped off his campaign tour bus in bluejeans and cowboy boots and sauntered into a sprawling cattle ranch in Florida’s rural heartland, it was hard to imagine anything had changed in Republican politics.

Inside a corrugated metal barn, the affable GOP candidate for Florida governor — considered a shoo-in for the position ever since he won a state House seat at the age of 22 — shook hands with sheriffs in uniform, exchanged pleasantries with cattle ranchers in broad-brimmed hats and cracked wise with a tobacco-chewing county commissioner.

But it didn’t take long for him to broach what he called “the elephant in the room”: President Trump’s endorsement of his rival, Ron DeSantis, the U.S. representative for Florida’s 6th Congressional District who moonlights as a frequent talking head on Fox News.

“You know, when President Trump ran for office, he ran on a plan,” Putnam said to supporters who gathered last week in Glades County, a sparsely populated land of cattle ranches and sugarcane fields about 100 miles northwest of Miami.

“My opponent is just running on an endorsement. Florida deserves better than someone who is just going to tug at Trump’s coattails,” Putnam added.

After amassing a wealth of political experience, local connections and campaign funds, Putnam now finds himself something of an unlikely underdog.

The 44-year-old stalwart conservative has served two decades as a state lawmaker, U.S. congressman and state agriculture commissioner. He has toured every nook and cranny of the state, making connections with farmers, garnering support from nearly 50 county sheriffs, and raised more than $37 million in campaign funds. Still, he appears to be trailing DeSantis.

With only days to go to Tuesday’s primary, a Florida Atlantic University poll of likely Republican voters released last week has the race’s two leading candidates almost neck and neck, with DeSantis at 32% and Putnam at 31%. About 22% were undecided.

Putnam is just the latest well-connected establishment Republican to struggle after Trump backed a rival in a state primary race. Already, Trump’s Twitter posts have helped push long-shot GOP candidates to victory in a string of Southern and Midwestern states.

Some traditional Republicans in Florida, a swing state Trump won by just 1.2% in 2016, have watched in dismay. Putting a Trump-endorsed candidate on the ballot, they fear, could turn off moderate and centrist Republicans and ensure a Democratic victory in the November general election.

“He’s basically a Trump hologram,” said Mac Stipanovich, a veteran Florida GOP strategist who identifies as a Never Trumper. “Trump just projects him on the screen and the Republican faithful go stumbling in his direction like lemmings heading towards a cliff.”

“Donald Trump himself barely carried Florida running against a terrible candidate,” Stipanovich added. “What if somebody who is not Donald Trump, but is carrying all his baggage, faces a decent candidate?”

Whoever wins the Republican race is likely to go up against one of two Democrats: Gwen Graham, a moderate and U.S. representative who hopes to be the state’s first female governor, or Philip Levine, a wealthy, self-financed former Miami Beach mayor.

R. Bruce Anderson, an associate professor of political science at Florida Southern College in Lakeland who has endorsed Putnam, said DeSantis would probably not fare well against a moderate Democrat.

“DeSantis has a long way to come back toward the center and begin to look like a reasonable choice for governor to most people,” he said.

But although many Democrats relish a race against a polarizing, Trump-aligned GOP candidate, some urge caution.

“To those who say this is going to be a referendum on the president, my response is: ‘Is that a directive you’re getting from the Hillary Clinton White House?’ ” said Steve Vancore, a Democratic pollster. “That doesn’t always seem to work out.”

Putnam, a fifth-generation Floridian who hails from a long-established citrus-farming family in Bartow, Fla., has mocked DeSantis as a glib, superficial opportunist, who is quick to parrot Trump’s talking points but knows little about the complexities of local politics.

“Florida needs somebody who knows our state, who can get from Perdido Key to Key West without a GPS,” Putnam said to supporters in Glades County. “Not somebody who tries to run for office from an out-of-state television studio.”

Born in Jacksonville and raised on Florida’s Gulf Coast, DeSantis, 39, is a graduate of Yale University and Harvard Law School, an Iraq veteran and Navy reservist, who touts endorsements not just from Trump, but from Fox News pundits Sean Hannity and Laura Ingraham.

Branding himself as “#1 conservative in FL,” DeSantis criticizes Putnam as an inauthentic career politician and casts himself as a disruptive yet principled conservative who will “drain the swamp in Tallahassee.”

In a tongue-in-cheek, 30-second television ad, DeSantis and his wife, Casey, poke fun at critics who say he is nothing but a Trump loyalist.

“Everyone knows my husband, Ron DeSantis, is endorsed by President Trump, but he’s also an amazing dad,” Casey says as the video shows DeSantis handing toy building blocks to his daughter, Madison, encouraging her to “build the wall.”

While much of the campaign has focused on style and loyalty to the president, both candidates stand for stronger immigration enforcement, gun rights and local choice in education. A key disagreement has centered on Florida’s water quality.

In a significant turn from Republican tradition, DeSantis has attacked Putman as a candidate too dependent on campaign cash from the sugar industry to clean up Florida’s waterways — a timely dig as a vast swath of the state’s Southwest coast suffers from a severe algae bloom known as “red tide” that has killed masses of fish, dolphins, manatees, sea turtles and devastated local economies.

“Adam is basically the errand boy for U.S. Sugar,” DeSantis said in a televised debate this month.

In turn, Putnam countered that DeSantis is hardly an environmental advocate and has little knowledge of the causes of the ecological crisis, which Putnam attributes to a mixture of agriculture, industry and sprawling residential development as 21 million people set up residence on a peninsula that used to be 60% wetlands.

Although Putnam carries endorsements from Florida Atty. Gen. Pam Bondi and Lt. Gov. Carlos López-Cantera, some leading Florida Republicans argue that the current moment in local and national politics calls for a fresh candidate who is not weighed down with traditional baggage. A Trump loyalist, they argue, is more able to energize the grass-roots base.

“Adam Putnam has a long resume, but at a time when people are looking for fresh ideas, I believe that’s a disadvantage,” said Don Gaetz, the former president of the Florida Senate, who has endorsed DeSantis. “He doesn’t have the new car smell that many Republicans find attractive.”

With Florida’s population booming, he added, politicians cannot expect to win elections just by going to the fireman’s picnic or the Chamber of Commerce dinner.

“Putnam has spent a lot of time driving around the state, but I don’t think that’s the sole qualifier to be an experienced governor,” said Jose Oliva, the Florida House speaker-designate. “I think you have to have, first and foremost, a very strong ideology of how you will govern and you must be able to move people and inspire them.”

As primary day looms, some Florida Republicans say a DeSantis primary victory, and a subsequent Democrat win in November, could be a necessary, if painful, step to thwart Trump’s outsize influence on the party.

“These right-wing populist candidates who are basically Trump clones or wannabes need to be beaten,” Stipanovich said. “They have to lose in the general elections and decide that maybe, just maybe, I shouldn’t be such a right-wing nut.”