An effort to clear up the air 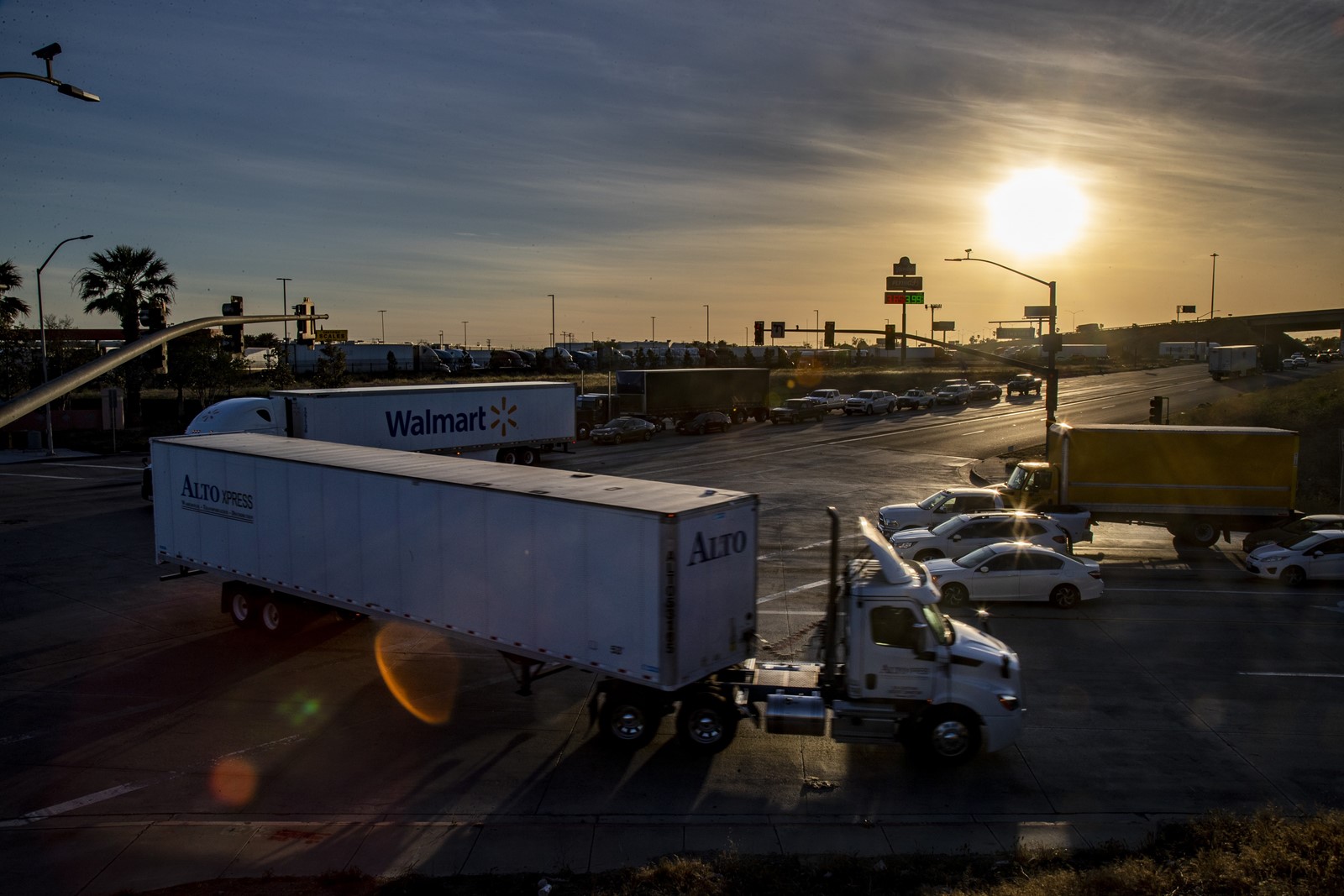 Roxana Barrera realized air pollution was a problem in her San Bernardino neighborhood when her son Leo got really sick just before his first birthday. He was wheezing so much she had to rush him to urgent care.

“It was scary,” the 27-year-old said. “The first time it happened, I didn’t know what was going on, I could just hear that he was really struggling to breathe.”

Leo, now 3, was prescribed an inhaler, and Barrera was told that poor air quality was partly to blame. Air pollution in her neighborhood is among the worst in the nation, and its asthma rate is in the 97th percentile statewide.

“I didn’t link it to the smog in our region at the time, but once I started to piece everything together, I thought, ‘Oh my god, this is a result of that.’” she said. “Now everywhere I look, I see semi trucks and warehouses dumping on our poor community.”

Barrera and her son are among hundreds of thousands of Southern Californians who breathe higher levels of air pollution and face increased risk of illness from living near warehouse distribution centers and other goods-movement hubs, which are disproportionately concentrated in communities of color. Explosive warehouse growth in San Bernardino and other inland communities, in particular, is bringing increasing numbers of pollution-spewing diesel trucks into areas already hit hard by dirty air.

Now Southern California air quality officials are set to vote on rules that for the first time would hold warehouses in the nation’s smoggiest region accountable for pollution from the diesel trucks they attract. At a public hearing Friday, the South Coast Air Quality Management District’s governing board is expected to decide whether to adopt the regulation, and how stringent it would be.

Approval of the measure would mark a big step toward curbing the environmental impacts of a booming goods-movement industry that is both an economic engine and major source of health-damaging pollution.

The industry, which handles many of the products flowing through the nation’s largest port complex and gets them into stores and onto people’s doorsteps, has only gotten busier as pandemic-fueled online shopping pushes record amounts of cargo through the region.

The rule has the support of environmentalists and community groups who for years have pleaded with state and local regulators to use their power to curb warehouse-related pollution. But powerful goods-movement interests are pushing members of the 13-member air-quality board to reject the proposal.

Industry groups say that the requirements would stifle job growth and would not clean the air, and that the rule amounts to a tax and is beyond the legal authority of the air quality agency.

“That’s totally false,” said Wayne Nastri, executive officer of the South Coast air district. “We’re very confident that not only do we have the authority, but we’re going to be able to achieve emission reduction.”

The rule would apply to about 3,000 large warehouses across the region, requiring them to take steps to cut or offset emissions associated with their operations.

It relies on a points-based system, in which warehouse operators choose from a menu of options, such as using electric or natural-gas fueled trucks, installing charging stations, rooftop solar panels, or even putting in air filters in nearby schools and child-care centers — a provision critics have complained would not actually reduce pollution.

Businesses subject to the rule can also opt to pay a mitigation fee, which would be used to fund similar air quality improvements nearby.

It’s not the agency’s largest rule in terms of pollution reduction. The air district predicts that over the next decade it will reduce emissions of smog-forming nitrogen oxides from warehouses by 1 to three tons per day, a decrease of 10 to 15%.

But its targets are big magnets for pollution. The trucks, cars and cargo- handling equipment associated with warehouses release more smog-forming pollution than any other sector, accounting for more than 12% of nitrogen oxides emitted in the South Coast basin, which spans Los Angeles, Orange, Riverside and San Bernardino counties, according to the air district.

The rule will be critical to the region’s faltering efforts to meet federal smog-reduction deadlines in 2023 and 2031, and could help ease health damage in polluted, truck-choked communities.

An analysis by the air district estimates that compliance with the rules could cost hundreds of millions of dollars, but result in health benefits worth about three times that amount, including the prevention of hundreds of early deaths from air pollution as well as thousands of fewer asthma attacks and missed work days over the first ten years.

The report predicts the logistics industry will continue to grow with the rule in place, with little effect on the region’s competitiveness, and “no warehouse relocation and minimal goods movement diversion.”

The air district also found that more than 2.4 million people live within half a mile of at least one large warehouse, that those areas have higher rates of asthma, heart attacks and poverty and are disproportionately Black and Latino.

A separate report by the Inland Empire-based People’s Collective for Environmental Justice and the University of Redlands counted 640 schools within half a mile of a large warehouse, most of them within areas identified as disadvantaged by the California Environmental Protection Agency.

In neighborhoods near warehouses, signs of the industry’s impacts are ubiquitous. Semi-trucks park in empty lots, idle their engines and trundle through residential streets, sometimes shaking homes. Stark, hulking new warehouses rise seemingly overnight. Their imposing walls are draped with “for lease” banners, while “now hiring” signs advertise wages of $16, $17 or even $19 an hour.

Like many in the Inland Empire, Jorge Heredia, of San Bernardino, has had a front-row seat as warehouses fill up more and more land, sometimes after local officials rezone residential areas and developers buy up and demolish homes to make way.

Heredia’s first job, at 17, was at a Kohl’s warehouse, and he once worked at an Amazon facility. Now a director at an arts center, he grows vegetables in a community garden plot next to a Mattel warehouse and has deep concerns about the industry’s impact on the region’s economy and its health.

“You feel torn,” Heredia, 30, said. “You understand the need for people to make a living. But you feel like you’re bombarded.”

The effect on air quality is clear, he said, especially in the summer. “The smog just sits there, and it bakes everything just like an oven.”

The Inland Empire alone is adding 10 to 25 million square feet of new industrial space each year, according to the research by the real estate services firm CBRE Group Inc., while rents have continued to rise and vacancies decreased during the pandemic.

Business leaders, however, argue that they should not be responsible for reducing freight pollution.

B.J. Patterson, chief executive of Pacific Mountain Logistics, which employs more than 65 people at a 200,000 square-foot warehouse in San Bernardino, said the rule would unfairly penalize his operation for pollution that is out of his control. He wants the air board to send it “back to the drawing board.”

Patterson said he did not know which of the compliance options his company would select. Most of the forklifts used inside are already electric, he said, and he does not control which trucks come in and out. Also, since the company leased the building, it was unclear how it would install electric vehicle chargers or solar panels.

Opting to pay the mitigation fees would cost his business close to $200,000 a year, he said.

Patterson said his clients, which include big retailers and food companies that need their products picked up from manufacturers and delivered to customers, “have made it very clear that they don’t think this is their issue and they don’t want to pay.”

But people living near such facilities say they are the ones paying, with their health.

That’s been the experience of Rebecca Hernández, 18, who has seen one warehouse after another rise within view of her family’s home in the Riverside County city of Perris.

She and her mother, Silvia, who both use inhalers for their asthma, have seen their health worsen since moving in a few years ago. Three new warehouses are visible from their frontyard, and they expect more will be built soon in the open fields directly across from their home.

Trucks drive down their street in increasing numbers. When they open the home’s windows they sometimes smell diesel fumes wafting inside.

Silvia, 40, said she’s had to spend more on more copays for doctor’s visits and prescriptions, and take time off work to deal with the wheezing, allergies, headaches and sinus infections that have become so frequent she’s taken to keeping a journal to track them.

“They’re interrupting our daily life, and it’s like there’s no consideration at all,” she said.

The air district’s move to regulate warehouses follows more than a decade of proposals to use its authority under state law to regulate ports and other freight hubs as “indirect sources” of pollution. The warehouse sector is the first being targeted with a rule.

It’s unclear whether the Southern California measure will garner support from a majority of the air-quality board.

The issue has in the past divided the panel of elected officials and other appointees, which includes industry-aligned Republicans from the Inland Empire and Orange County, some of whom have previously voted against regulating hubs of freight pollution.

Back in San Bernardino, Barrera said she is hopeful the air board will “do the right thing for our very poor community.”

“People of color are the ones that are mostly suffering from this, and I think that’s why a lot of people don’t care, honestly,” she said.

“Ultimately we need zero emissions, but starting off with this would be a huge step in the right direction.”