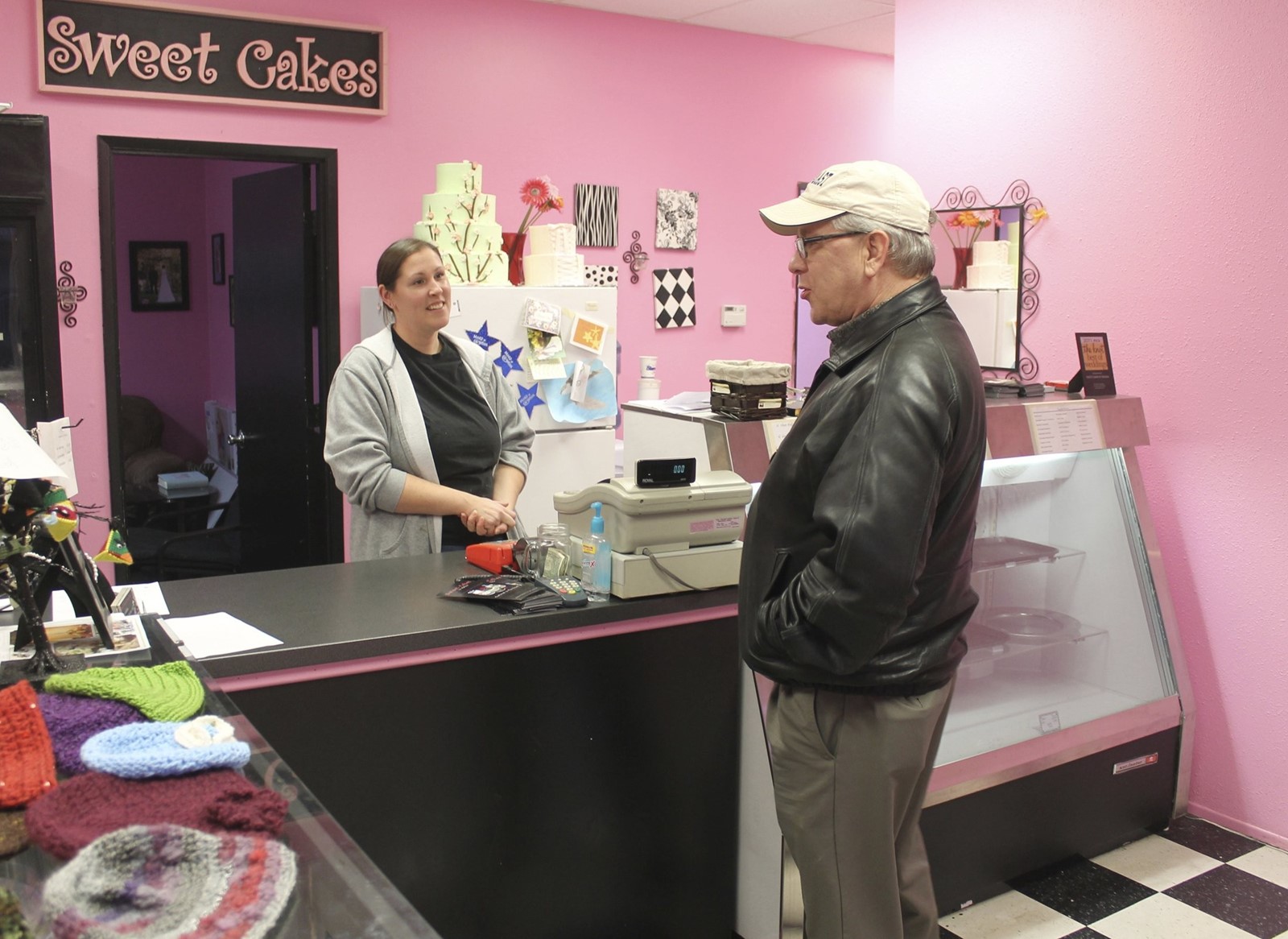 MELISSA KLEIN at her bakery in Gresham, Ore., in 2013. Klein and her husband refused to make a wedding cake for a lesbian couple and were fined by Oregon authorities for violating an anti-discrimination law. (Everton Bailey Jr. Oregonian)
PREVIOUS IMAGE

The Supreme Court announced Monday it would not decide, for now, whether a Christian couple from Oregon had a constitutional right to defy that state’s civil rights law and refuse to make a wedding cake for the marriage of two women.

Instead, the justices told an Oregon court to take a second look at the case based on last year’s high court ruling in favor of a Christian cake maker from Colorado.

In doing so, the court kept alive the couple’s appeal and left open the question of whether businesses can discriminate against gays and lesbians based on their religious beliefs.

The tentative decision shows again that Chief Justice John G. Roberts Jr. and his colleagues are inclined to put off rulings on culture war controversies.

Melissa and Aaron Klein refused to make a cake in 2013 for the marriage of two women. Oregon authorities fined them $135,000 for violating the state’s law that requires businesses to provide full and equal service for all customers, without regard to race, religion or sexual orientation.

The justices had considered the appeal since early February. The couple’s lawyers asked the court to hear the case and issue a national ruling. Oregon’s attorney general said the appeal should be turned down.

The justices did neither. The court issued a one-line order sending the case of Klein vs. Oregon Bureau of Labor back to an Oregon court “for further consideration in light of Masterpiece Cakeshop vs. Colorado Civil Rights Commission.” In that case, the justices by a 7-2 vote said a Christian cake maker had been treated unfairly by a state civil rights commission.

The Kleins were represented in the Supreme Court by the Texas-based First Liberty Institute, and its president, Kelly Shackelford, called the outcome “a victory for Aaron and Melissa Klein and for the religious liberty of all Americans.”

Rachel and Laurel Bowman-Cryer, the two women who sued after they were turned away, were represented by Lambda Legal, which called the outcome “very disappointing.”

“It is a long-standing rule that the freedom of religion is not a license for businesses to discriminate,” said Jennifer Pizer, a senior counsel for the legal defense fund.

In recent years, several Catholic social services agencies have objected to arranging adoptions for same-sex couples, and a small number of business owners — including a photographer in New Mexico and a florist in Washington state — waged legal battles after refusing to participate in same-sex marriage ceremonies.

Until now, the Christian business owners have lost in the courts. Judges have upheld the state civil rights laws and the principle of nondiscrimination.

Four conservative justices dissented in 2015 when the court upheld an equal right to marry for same-sex couples. With Justice Brett M. Kavanaugh having joined the court, there may now be five justices ready to side with religious conservatives on the question of whether their beliefs can override civil rights statutes.

Retired Justice Anthony M. Kennedy played the key role in the court’s 2015 decision on equal marriage rights. He was torn last year over the case of a baker from Colorado who cited his Christian beliefs as reason for turning away two men who were planning a wedding party.

Kennedy wrote an opinion in Masterpiece Cakeshop that did not resolve how future cases would be decided. He endorsed equal rights for gays and lesbians, but said Jack Phillips, the baker in that case, had been subjected to religious “hostility” by a state commission.

“These disputes must be resolved with tolerance, without undue disrespect to sincere religious belief, and without subjecting gay persons to indignities when they seek goods and services in an open market,” he wrote.

The Klein appeal asked the justices to decide “whether Oregon violated the free speech and free exercise clauses of the 1st Amendment by compelling the couple to design and create a custom wedding cake to celebrate a same-sex wedding ritual, in violation of their sincerely held religious beliefs.”