Drone wipes out generation of birds

Thousands of elegant terns fled Bolsa Chica Ecological Reserve after the May 12 crash. 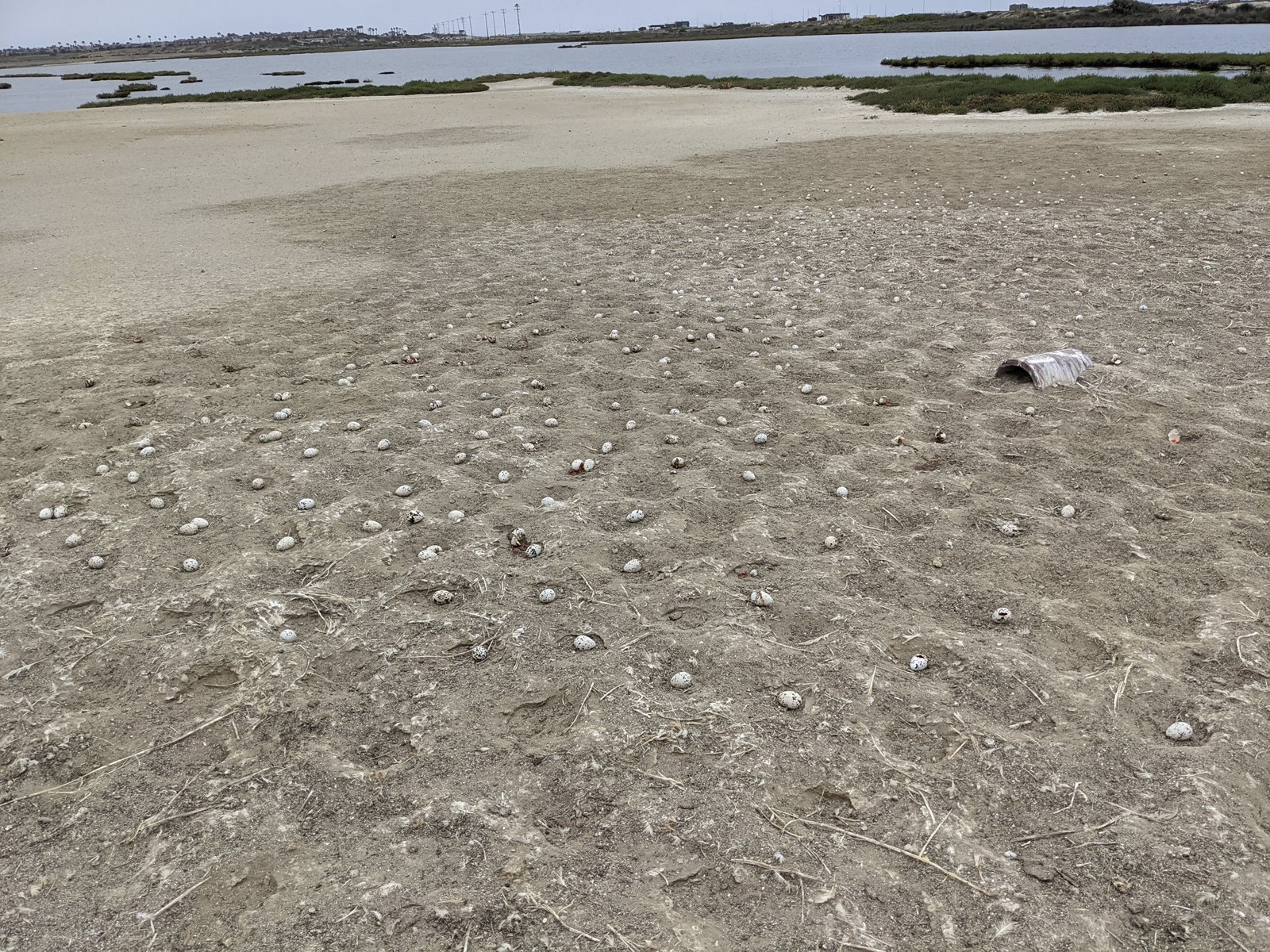 UP TO 2,000 eggs were abandoned by elegant terns after a drone crashed at a Huntington Beach reserve. ( California Department of Fish and Wildlife)
PREVIOUS IMAGE

Eggs littered the sand, but there was no sign of life around or in them.

The seabirds that should have been keeping watch had taken off, terrified by a drone that crash-landed into their nesting grounds on an island at the Bolsa Chica Ecological Reserve.

“We’ve never seen such devastation here,” said Melissa Loebl, an environmental scientist who manages the Huntington Beach reserve. “This has been really hard for me as a manager.”

Some 3,000 elegant terns fled the reserve after the drone crashed May 12, leaving behind 1,500 to 2,000 eggs, none of them viable. It was the largest egg abandonment that scientists who work there can recall.

As for the birds, which are highly sensitive to perceived threats — nobody is sure what happened to them. “We actually still don’t know where they are,” Loebl said.

The mass abandonment was the culmination of a year of issues caused by increased traffic to the reserve, which has seen the number of visitors double as the COVID-19 pandemic sent droves of people outdoors.

There has been an uptick in bicyclists, who sometimes carve trails off established paths and disturb sensitive areas, and more people have been bringing dogs, which can scare wildlife and leave behind waste. Both are prohibited in the reserve, as they threaten to flush birds off their nests.

“They’re seen as predators,” Loebl said. “Think of a bird. When I migrate 100 miles, I want a safe place to nest, forage and breed, and they come here to do just that.”

But nothing has been as catastrophic as drones, which are being flown over the reserve with increasing frequency.

Drones are not permitted to fly over state wildlife reserves, precisely because they run the risk of disturbing habitats, said Officer Nick Molsberry of the California Department of Fish and Wildlife. If that happens, the operator can face additional charges for nest destruction and harassment of wildlife, he said.

The Bolsa Chica Ecological Reserve is one of the last remaining and largest coastal wetlands in Southern California, where 95% of the habitat has been destroyed, Loebl said. More than 800 species rely on the 1,000-plus-acre area for critical habitat. Of those species, 23 have special status, including the California least tern and Ridgway’s rail, which are endangered, and the Western snowy plover, which is classified as threatened.

“These are all birds we put a lot of time and energy into managing their habitat so they can have a successful year breeding,” Loebl said.

In April, thousands of terns arrive for the breeding season, including elegant terns that migrate from Central and South America. They stay until August, when they fly away with their chicks.

Although elegant terns are not considered threatened or endangered, Bolsa Chica is one of just four known nesting sites, said Michael H. Horn, professor emeritus of biology at Cal State Fullerton. The others are at the Los Angeles Harbor, in San Diego and in Mexico’s Gulf of California.

“We worry about them because there’s so few nesting sites, not so much because of their numbers,” he said. “So that’s a reason why if a nest site doesn’t produce or fails, that’s concerning.”

Horn is waiting to hear whether the birds have established themselves in Mexico, which is usually the largest colony. There are now several thousand in San Diego. But they chose not to nest this year at the Los Angeles Harbor, making the abandonment at Bolsa Chica even more of a loss.

“We have a person who monitors them and other seabirds at the port, and he said the birds have flown by, maybe stayed a little while, a few hours or overnight, and then they’ve left,” Horn said, noting that they may decide not to populate a site because of predators, disruptions to the food supply or other disturbances.

Elegant terns, together with some 300 other avian species that frequent Bolsa Chica, draw birders and photographers from across the region and beyond.

In the case of the crashed drone, given the scope of the devastation, officials are seeking to aggressively enforce the law. Molsberry is working with the Orange County district attorney’s office to figure out how to get a warrant and lawfully retrieve video and location history from the drone.

“We will hopefully have some great footage of the user and what the drone did, its flight path, and be able to articulate all the elements we need to fulfill the violation for this person,” he said.

Molsberry, who has been with the department eight years, said he’d never seen a drone crash-land in a reserve before this spring. But the May 12 crash was actually the second in a 24-hour stretch. The day before, a drone went down in Bolsa Chica near nesting sites of the California least tern and the snowy plover. The birds fled but eventually returned, “which was great,” Loebl said. “Still sad, but great.”

That drone operator came forward to claim the device and received a citation.

On Thursday, while KABC-TV Channel 7 was interviewing Loebl and Molsberry for a segment about the drone problem, a man pulled into the parking lot and started to fly a drone right above them, sending it directly toward another tern colony, Molsberry said.

“I actually ended the interview, contacted the individual, identified myself and issued that person a citation right there on the spot,” he said. Television cameras captured yet another drone flying over the reserve whose operator couldn’t be found.

The man Molsberry cited claimed he didn’t realize it was illegal to fly drones there because a Federal Aviation Administration app showed the airspace as a so-called green zone, Loebl said.

“When it comes to the flying of drones in the airspace, the airspace does not belong to us,” Molsberry conceded, adding that the FAA might not list the reserve as a no-fly area, but there are signs all around Bolsa Chica stating that drones can’t be flown there, as he pointed out to the man who was cited.

The reserve’s management is working with the volunteer groups Bolsa Chica Conservancy, Bolsa Chica Land Trust and Amigos de Bolsa Chica to develop a program that will have trained docents walk the property and educate the public about the rules. Loebl said the state is also hoping to work with federal authorities to ensure that airspace over the reserve and other sensitive areas is listed as restricted.

In the meantime, the long-term effects of the nest abandonment remain unclear. Horn noted that there will be some 4,500 fewer birds feeding on anchovies and sardines in the waters near Bolsa Chica this summer. That could conceivably draw more predators that also like to feed on the fish, such as seals, sea lions and other seabirds.

“The removal of one species might affect another species,” Loebl said. “We have such rich biodiversity here.”

Horn said it’s possible the elegant terns fled to other nesting sites, and they could even nest again and produce more eggs before the summer ends.

But there will be no elegant tern chicks at Bolsa Chica this year.

“That’s a full generation of birds not established,” Molsberry said. “It’s just so abnormal not to see them there right now.”