Trump’s attacks take a toll on his own credibility, as well as the media’s 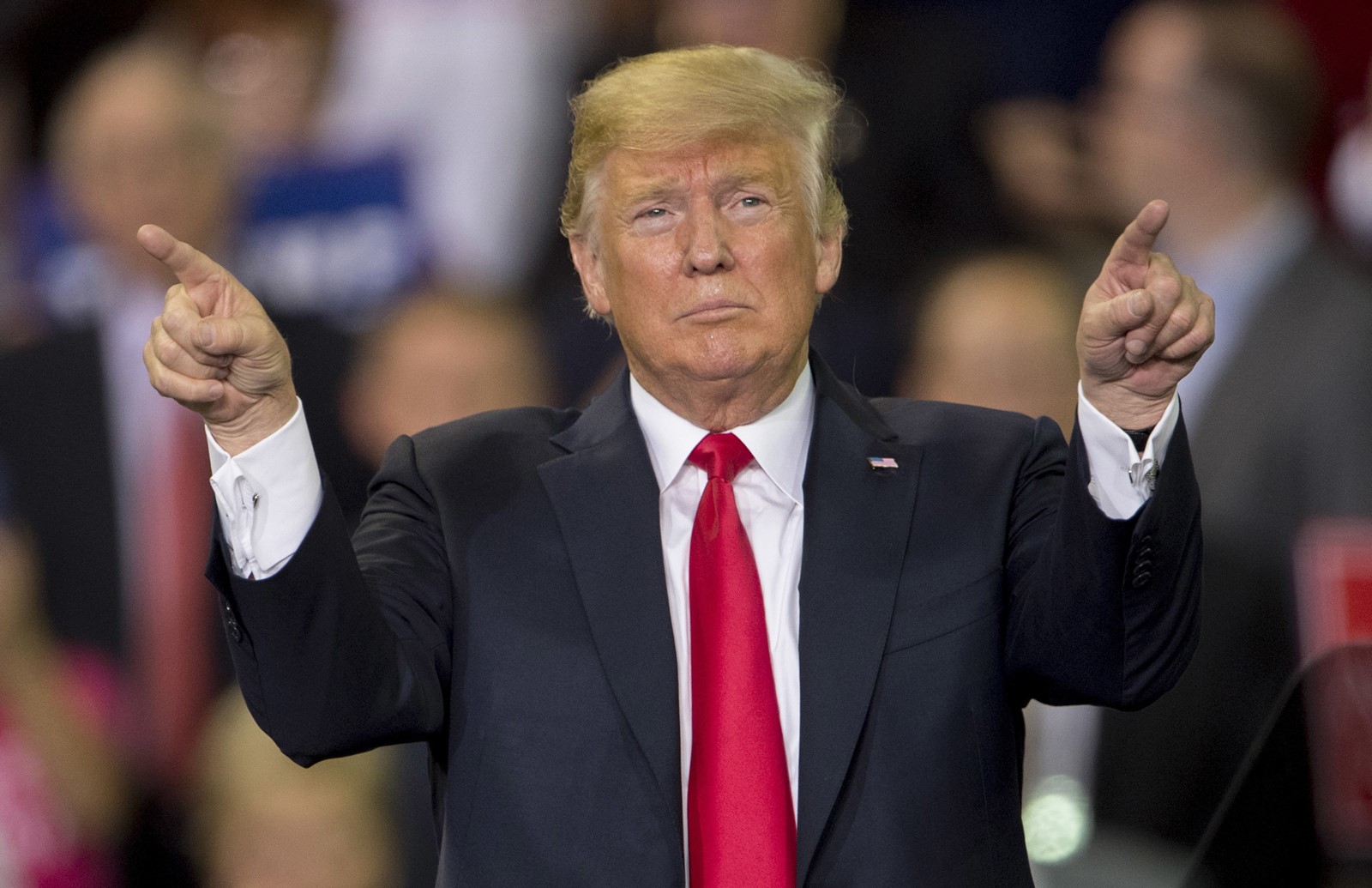 Who do you trust?

As President Trump stokes the fires of doubt with attacks on much of the media as “fake news” and “enemies of the people,” the nature of the news bubbles into which Americans have sorted themselves has taken on increased importance.

Trump’s attacks on the media cause some to worry about violence: An Encino man was arrested last week, for example, and charged with threatening to shoot employees at the Boston Globe after that newspaper published a widely publicized editorial critical of the president’s press-bashing.

So far, however, the more consequential effect has been on politics, as Trump seeks to undermine the credibility of those he sees as critics and erode agreement over what’s factual, even as his own credibility has suffered.

New data from a USC Dornsife/Los Angeles Times poll this summer show how far the erosion of trust has gone: Of nine major sources of news, none were “mostly” or “completely” trusted by more than one-third of voters. The trust that does exist was heavily polarized along party lines, with Trump trailing the pack.

For media organizations that hold themselves out as nonpartisan, “having trust sink below 50% is concerning,” said Margaret Gatz, a psychology professor at USC and a senior scientist at its Center for Economic and Social Research, which conducted the study.

“It is difficult to project how trust can be recovered,” she said.

Not all of that — or even most — is Trump’s doing: Trust in the news media, and most other U.S. institutions, has declined slowly and steadily for decades. But levels of trust in the media nosedived during the 2016 campaign year, according to surveys by Gallup and other nonpartisan polling organizations. That was especially true among Republicans, probably reflecting Trump’s attacks on the press.

What Trump’s attacks haven’t done is improve the administration’s own credibility.

Just 1 in 5 voters said they mostly or completely trusted information from the Trump administration, the USC poll found. That rating was significantly worse than voters gave some of Trump’s frequent targets, including CNN, MSNBC and national newspapers.

That’s also only about half as many voters as the share that approves of Trump’s job performance, evidence that many of those who support him do so even though they don’t believe much of what he says. Independent fact-checkers have cataloged thousands of false statements that Trump has made since taking office, some of which may stem from ignorance or wishful thinking, others of which appear to be intentional lies.

“The trust number for the president is beyond belief,” said Bob Shrum, the longtime Democratic political consultant who directs USC’s Jesse M. Unruh Institute of Politics, which cosponsored the poll. “I don’t think any other American president would ever have had that number.”

The poll gave people a list of nine sources of information — MSNBC, CNN, Fox News, public television, National Public Radio, national newspapers, regional and local newspapers, the Trump administration and the respondent’s member of Congress. For each, the poll asked respondents to say how much they “trust that source to give you unbiased and truthful information.”

The poll also asked people what emotions they frequently feel when they follow news about Trump and his administration.

Of the nine news sources, the Trump administration was by far the least trusted. It was the only source in which a majority, 55%, said they had no trust.

Those who do mostly or completely trust Trump get at least one big emotional benefit, however. They were the least likely to report that they felt confused by the welter of news stories about the administration.

The administration has sought to give supporters a consistent, and relatively simple, narrative: that all the many investigations and news events of the last 19 months reflect a “deep state” conspiracy to bring down Trump. The poll results suggest that approach works, but only with Trump’s relatively small hard core.

The poll provides a portrait of that core support: Mostly men (56%), overwhelmingly white (80%), they tend to be older than average and are more likely to live in the Midwest or South, least likely in the West.

They also, not surprisingly, overlap heavily with those who strongly trust Fox News. Of the people who say they mostly or completely trust Trump, about 3 in 5 give that same level of trust to Fox.

Local newspapers receive the most widespread trust, reflecting the lower level of polarization around local news. Only about 1 in 7 voters said they had no trust in their local or regional newspaper.

But the endorsement was fairly tepid. About half of those polled said they “somewhat” trust their local newspapers, while a third said they mostly or completely trusted them.

Among nationally oriented media, the results showed strong amounts of polarization. About 25% of voters said they mostly or completely trusted MSNBC or Fox, for example, with only a fairly small number trusting both. About 60% declined to give strong levels of trust to either of those outlets.

CNN, NPR, public television and national newspapers got strong levels of trust from a slightly larger share of the public — about 3 in 10 — with trust much higher among Democratic voters than Republicans. Almost 1 in 5 people who voted for Hillary Clinton in 2016 said they had “complete trust” in NPR, with an additional third saying they “mostly” trust the radio network — one of the most positive ratings the poll found.

The ratings for each of the news sources show slightly different patterns in who trusts whom. Mostly, though, the poll shows voters divided into two broad groups: those who trust Trump and Fox and those who trust what conservatives deride as the “mainstream media.”

Individual members of Congress scored highest as a source that people trust “somewhat,” with 54% giving that rating.

Asked what emotions they feel when they hear news about Trump from their most trusted or preferred source of news, those who mostly trusted Trump or Fox were more likely to say that the news made them feel positive about the administration — hopeful, satisfied or pleased.

Those who mostly trusted one of the other media sources tended to say the news from their most trusted sources made them feel disgusted, worried or outraged.

Seven in 10 of those who have high levels of trust in either MSNBC or CNN, for example, said they frequently felt “disgusted” when hearing news about Trump.

Political strategists have long said that anger and other negative emotions motivate people to vote, and the survey bore that out. People who said they were likely to vote for a Democrat for Congress this year were significantly more likely than Republican voters to say that the news they heard made them more likely to vote.

The poll also provided evidence of a continuing paradox in U.S. politics: Even as voters increasingly sort themselves into opposing camps with separate news sources, they profess to not like it. Almost 6 in 10 Republican voters and just under half of Democratic voters said they were tired of partisan coverage.

This USC Dornsife/Los Angeles Times poll was conducted July 16 to Aug. 16, using the probability-based Understanding America Study panel of the USC Center for Economic and Social Research. The poll surveyed 5,044 adults, including 2,459 likely to vote in November’s midterm election. It was overseen by the center’s survey director, Jill Darling, and conducted along with the Unruh Institute. Results were weighted to reflect the known demographics of the American population. The margin of error for all likely midterm voters is 2 percentage points in either direction.