At Sunrise Elementary in Boyle Heights, a new charter is sharing the space, and they are competing for survival 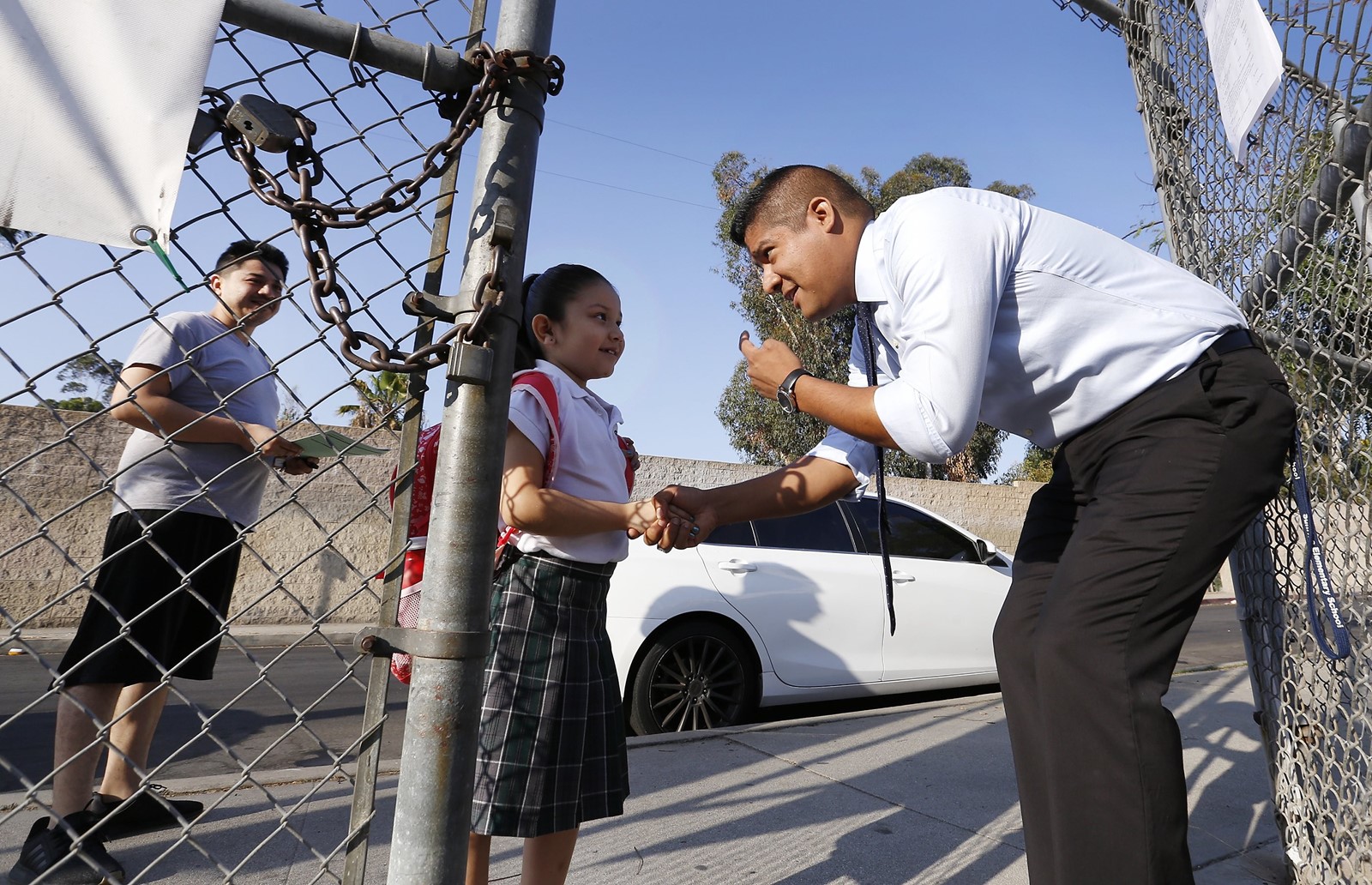 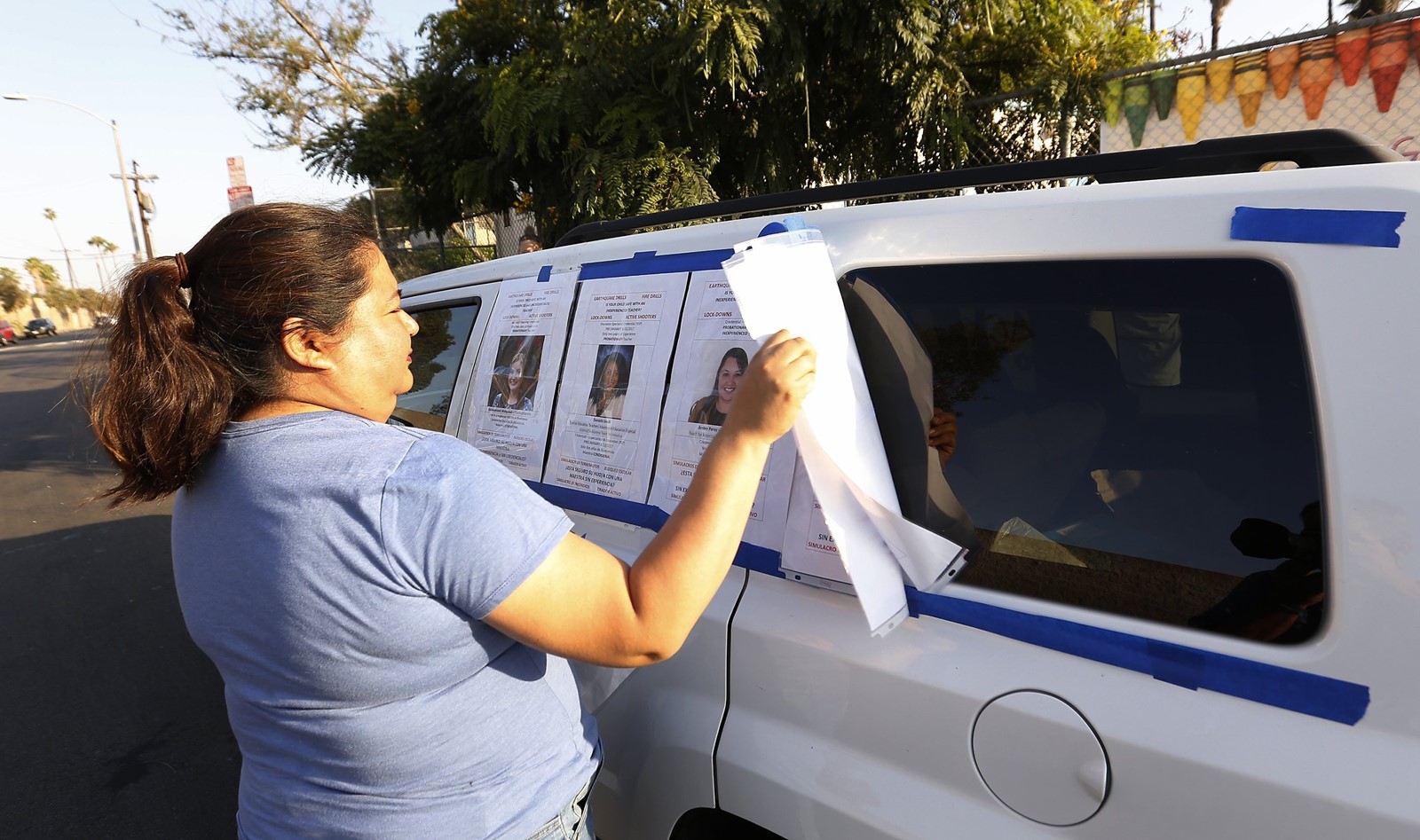 SUNRISE teacher Mimi Guzman-Duncanson removes photos of Excelencia staffers from the windows of a vehicle parked at the campus. ()
PREVIOUS IMAGE

For three days, an SUV was parked in front of Sunrise Elementary in Boyle Heights, with homemade posters taped onto its windows. They featured photos of teachers and administrators at a new charter school along with warnings that they lacked both experience and adequate professional credentials.

Don’t trust Excelencia Charter Academy — that was the clear message, which the new charter’s supporters saw as nothing less than harassment.

For some staff members at Sunrise Elementary, however, the display was justified. The two schools are in a competition for survival that may be especially fierce because they share the same campus.

Excelencia ended up at Sunrise because of a state law that allows charter schools to use available space — at cost — on public school campuses. Dozens of local charters take advantage of this opportunity. But this shotgun marriage of competing programs can be fraught, and tensions were exacerbated here because the neighborhood is saturated with old and new public schools during a time of steadily declining enrollment in the Los Angeles Unified School District.

It is by no means certain that both schools will attract enough students to survive, which makes some at Sunrise particularly bitter.

It’s not just that the nation’s second-largest school system is losing about 2.5% of its students a year, which added up to about 13,000 last year. Or that enrollment this fall appears to have dropped below 500,000 for the first time in decades because of a dramatic decrease in immigration as well as local residents who are aging, having fewer children or moving to more affordable areas.

The growth of independently operated charter schools like Excelencia is also a central factor; 224 charters now enroll more than 112,000 students. There are no limits on how many new charters can open, and their growth is boosted by a steady infusion of money from philanthropists.

Although some charters in the district have waiting lists, there are indications that demand may be slowing. Overall enrollment in the district increased relatively modestly last year, by about 1,000 students. And though Excelencia was one of 10 new charter schools to open this fall, seven charters have closed in recent months.

Enrollment at Sunset, a traditional neighborhood school, dropped over the last five years from 463 to 374 — and it was that decline that opened up classroom space for a charter to move in. Excelencia, which offers transitional kindergarten through first grade this year, seized the opportunity but began the school year with only 68 students, about half as many as it had hoped for.

Excelencia founder Ruben Alonzo said his school is needed to provide families with a high-quality alternative to local traditional public schools with low test scores. Those schools, he said, are failing students for whom education is a way out from poverty.

“This is where a quality school needs to be built,” he said.

Sunrise’s student population reflects the area it serves: 90% low-income, with 40% of students learning English, according to recent state data.

Sunrise Principal Luis Barraza said schools like his are getting a “bad rap” from charter school recruiters and other critics, although “it’s great that people have choices, and I know that there are a lot of choices.”

Too many choices, given the departure of families from the area, he suggested: “We do see now a lot more people going than coming.”

L.A. Unified has tried to fight the competition by opening more of its popular dual-language programs as well as dozens of new specially focused magnet schools. The hope is that the programs will win students back from charters, though they also draw them away from other L.A. Unified schools.

Sunrise has one of the new dual-language programs, with lessons taught in English and Spanish. The school also has begun to go door to door and attend events to recruit families, as charters have done for years. Test scores in reading and math have bumped up, though they remain below the state average.

Sunrise also counts as a selling point the experience of its staff. The average Sunrise teacher has been in the classroom for 20 years, and three-quarters of them have master’s degrees.

Excelencia’s head of school, Alonzo, is 29. He majored in economics at MIT and received a master’s in education at Harvard. He previously worked for four years at a Texas charter school — as a teacher for half the time and assistant principal for the rest.

“I’ve tutored, mentored and student-taught, and studied education for over a decade,” Alonzo said.

Sunrise kindergarten teacher Mimi Guzman-Duncanson, who is responsible for the anti-Excelencia SUV display, pointed out that most of Sunrise’s teachers graduated from local schools.

“We are committed hometown kids who love our community,” she said.

Guzman-Duncanson is angry about having to share the campus, calling charters “leeches and parasites that want to destroy the host school.” She’s been involved in at least eight protests — one of which drew about 80 people — and delivered a petition with 400 signatures to Excelencia asking the school to go elsewhere.

Alonzo, for his part, originally had other plans — to launch the school in nearby East L.A., where he had been recruiting families. When he couldn’t find a spot there, the district offered seven rooms in a corner of the Sunrise campus.

Alonzo lost some East L.A. families with the location switch and has struggled to make up the difference in Boyle Heights.

One taker was Lori Atwater, who is raising her granddaughter while her daughter recovers from illness. The local L.A. Unified schools were never an option, she said, because of low test scores.

“They’re small, they’re starting and they’re eager to do well,” she said of Excelencia. “You can text a teacher and they call back within the hour.”

Alonzo said opening a school has long been his dream. In rural Texas, where he grew up, his father worked as a public teacher during the school year and as a farmworker during the summer.

Excelencia’s instructional approach will stand out in part, he said, by emphasizing writing and character development and by training students to devote 100% of their attention to learning.

By last week, Alonzo was down to 59 students, with most of the departures from families moving out of the area. But he hopes to grow his school all the way up to eighth grade, which would put him in competition with another charter, KIPP L.A. Prep, which serves students in grades five to eight. That school isn’t on the Sunrise campus but is right next door, across a fence from the classroom bungalows Excelencia is using.

In Sunrise’s ZIP Code, there are five charter schools that serve elementary students as well as nine district-run elementary or early education campuses.

All the competition had Sunrise Principal Barraza worried as the school year began and the official day to count enrolled students approached. Schools with too few students often end up losing teachers and other staff. It hurt that the district transferred two small classes for disabled students, which also cost Sunrise two students who were siblings of disabled students.

Last year Barraza lost teacher Roxana Okamoto in this way because she had less seniority than other faculty members, despite 17 years in the classroom. Okamoto was able to return this year when a teacher retired.

Yesenia Gonzalez has enrolled all four of her children — ages 7 to 15 — in Sunrise and kept them there even after she moved from the area.

One child had reading problems, and the teacher would stay after school to help. Another child needed emotional support, and that was available too. And her older daughter has had no problem moving into a middle school program for gifted children and taking a college course.

Her family and the school staff, she said, developed a bond: “You begin to feel that this is your neighborhood and this is your school.”

She was delighted to learn this year that her youngest would have Okamoto as her second-grade teacher.

When the enrollment was officially counted this month, Sunrise had gained six students since the start of the year — but the total of 337 was not enough.

Okamoto, the school learned, would have to be reassigned elsewhere in the district. Her students would be split among the remaining teachers.