President’s legal team for impeachment trial is still up in the air. 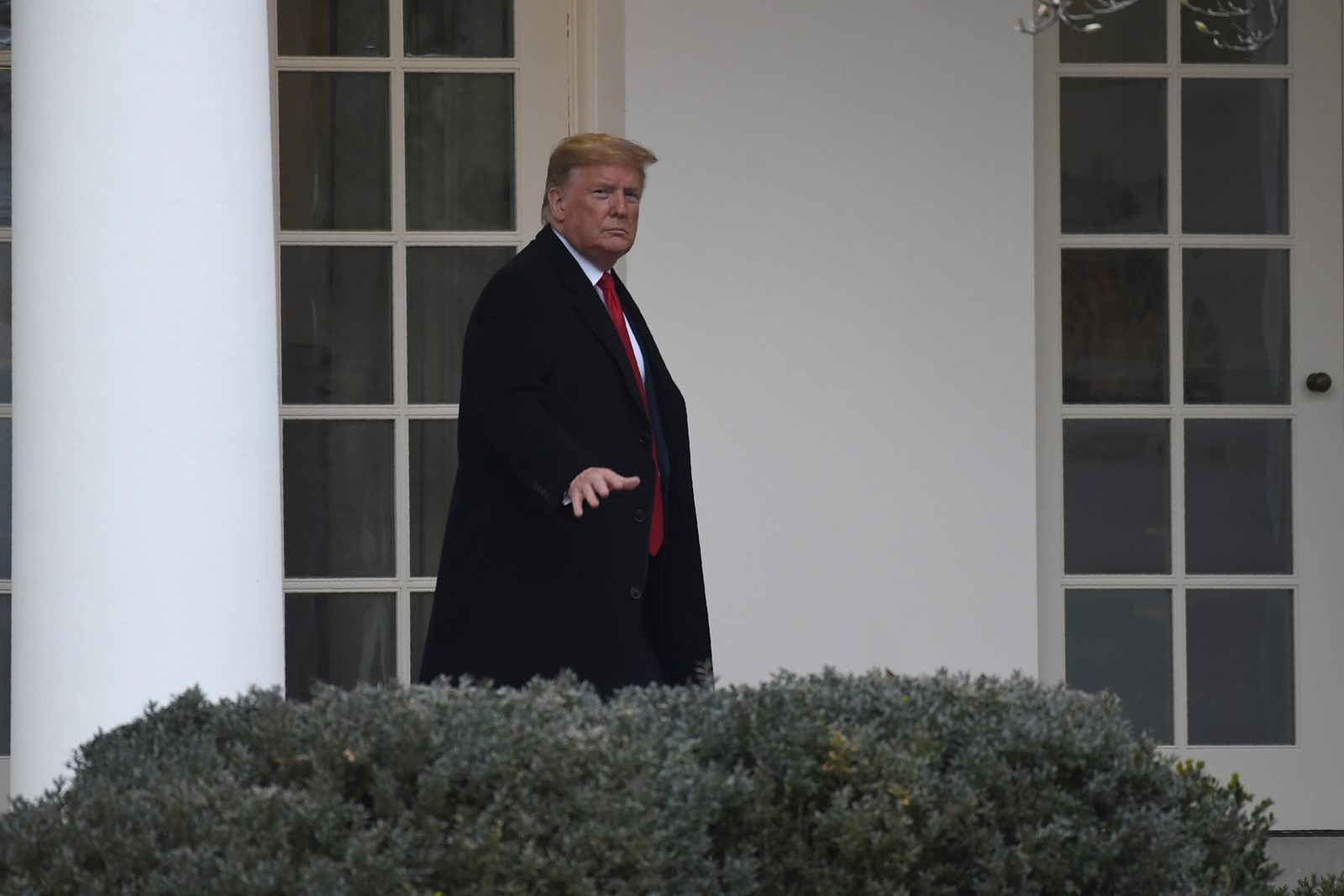 PRESIDENT TRUMP’S lawyers have not said whether they will seek to call witnesses in the impeachment trial, or how much time they will need to present their defense. The trial is expected to start next week. (Susan Walsh Associated Press)
PREVIOUS IMAGE

President Trump’s lawyers are scrambling to assemble their legal team and draft opening statements for a Senate impeachment trial that is expected to start next week and will determine whether to remove the president from office.

As the House prepared to send articles of impeachment to the Senate, Trump’s lawyers huddled in the Oval Office with their unpredictable client and sought to finalize who will appear on the president’s behalf — and who will advise on the sidelines of only the third presidential impeachment trial in U.S. history.

Despite the looming trial, Trump’s lawyers have not said whether they will seek to call witnesses, or how much time they will need to present their defense. Nor is it clear whether Trump will try to bring in outspoken House Republicans who ardently defended him during the impeachment hearings.

The still-unsettled legal strategy adds to the uncertainty of a constitutional process that is rarely used — and never before with a sitting president running for reelection.

Another wild card is Alan Dershowitz, the constitutional law scholar known for his brash style and high-profile defendants. Dershowitz, who chatted with Trump on Christmas Eve at Mar-a-Lago, Trump’s resort in south Florida, could help argue constitutional issues in the Senate, according to one person with knowledge of the discussions who spoke on condition of anonymity.

It would be a quintessential Trump decision, embracing a TV-savvy attorney who has defended him on Fox News while ignoring the unease that Dershowitz has generated among some Republicans on Capitol Hill because of his association with the late Jeffrey Epstein, the wealthy pedophile who rubbed shoulders with powerful figures in politics and academia.

Dershowitz has denied any wrongdoing in that case, and he declined to comment about a possible role in the impeachment trial. Whatever is decided, Pat Cipollone, the White House chief counsel, and Jay Sekulow, the president’s longest-serving personal lawyer, will anchor the defense strategy.

Both are expected to have speaking roles once the trial begins. Cipollone’s deputies in the counsel’s office, Michael Purpura and Patrick Philbin, will also help defend Trump.

The House of Representatives voted Dec. 18 to impeach Trump on charges of abusing his power by asking Ukraine to investigate his political enemies and of subsequently obstructing Congress by blocking senior members of his administration from cooperating with subpoenas by testifying or providing documents.

Trump’s lawyers declined an offer to appear or offer a defense in the House impeachment hearings, relying instead on Republican House members, especially Reps. Jim Jordan of Ohio, Doug Collins of Georgia and John Ratcliff of Texas.

The president has insisted he’s done nothing wrong, but the specifics of his trial defense remain in flux, partially because the Senate has yet to release the rules for the trial and partially because Trump is prone to changing his mind.

After spending weeks demanding an extended trial that could provide him with a cinematic closing act — and presumed acquittal — to the impeachment saga that began in September, Trump abruptly reversed course over the weekend and said the Republican-controlled Senate should simply dismiss the case against him.

Dershowitz approved, calling it the “right approach” because “the articles of impeachment simply do not charge constitutionally impeachable offenses.”

“We’ve never had an impeachment previously that didn’t at least claim that it fit the constitutional criteria,” he said in a phone interview.

In a separate interview, Sekulow said the legal team wasn’t going to commit to any such plan.

“Nothing’s off the table, but it’s too early to decide,” he said.

The idea also appears a nonstarter with Senate Republicans, who have made no secret about their intent to acquit Trump but prize their chamber’s reputation as an independent, deliberative body.

“I just don’t think we should have a continuation of the circus-like atmosphere that we’ve seen in the House,” Sen. John Cornyn (R-Texas) told Fox News on Tuesday.

Unlike in the House, where Trump’s allies cared little if it looked like the president was calling the shots, some senators may bristle at the appearance that they’re carrying his water even if they back him in the end.

“Senators as a rule don’t like to be dictated to,” said Jim Manley, who served as an advisor to former Democratic leader Harry Reid.

Trump’s advisors have tried to make him aware of that distinction, and at times he has shown some deference in his public comments and tweets, suggesting he would not intervene in the process. But Trump usually resists being reined in when his own reputation is on the line.

“He’s spent his life trying to fix things to manipulate things for his own benefit,” Manley said. “The question here is whether he’s going to be able to fix the Senate like he used to do with New York real estate deals.”

The trial could take a volatile turn if senators decide to call witnesses such as John Bolton, his former national security advisor, who has offered to testify if subpoenaed.

Trump has said he would invoke executive privilege, the legal principle that allows presidents to keep confidential conversations with aides, if that happens.

It’s unclear whether the Senate would respect that claim, and at least four Republicans would need to join with Democrats to call Bolton as a witness.

Another unpredictable factor is Rudolph W. Giuliani, the former New York mayor who also represents Trump as a personal lawyer. Giuliani has advocated far-fetched legal theories on Twitter, such as urging the Supreme Court to toss the case against the president.

In addition, Giuliani’s role in the impeachment trial is more akin to a witness — or a potential suspect — than a lawyer.

He has served as Trump’s point man on trying to dig up dirt in Ukraine on Joe Biden, the former vice president who is seeking the Democratic presidential nomination. Giuliani refused to respond to a subpoena from the House, and he’s continued traveling to Ukraine to promote unfounded allegations about Biden and his son Hunter, who served on the board of a Ukrainian gas company.

It’s unclear how long Trump’s trial will last. President Clinton, who was impeached for lying to a grand jury about his affair with a White House intern, was acquitted by the Senate in 1999 after five weeks of proceedings.

However long the trial lasts, “the president is not afraid of a fight,” Hogan Gidley, a White House spokesman, said Tuesday.