It could take days to figure out who won the presidential race. Here’s a guide to election night. 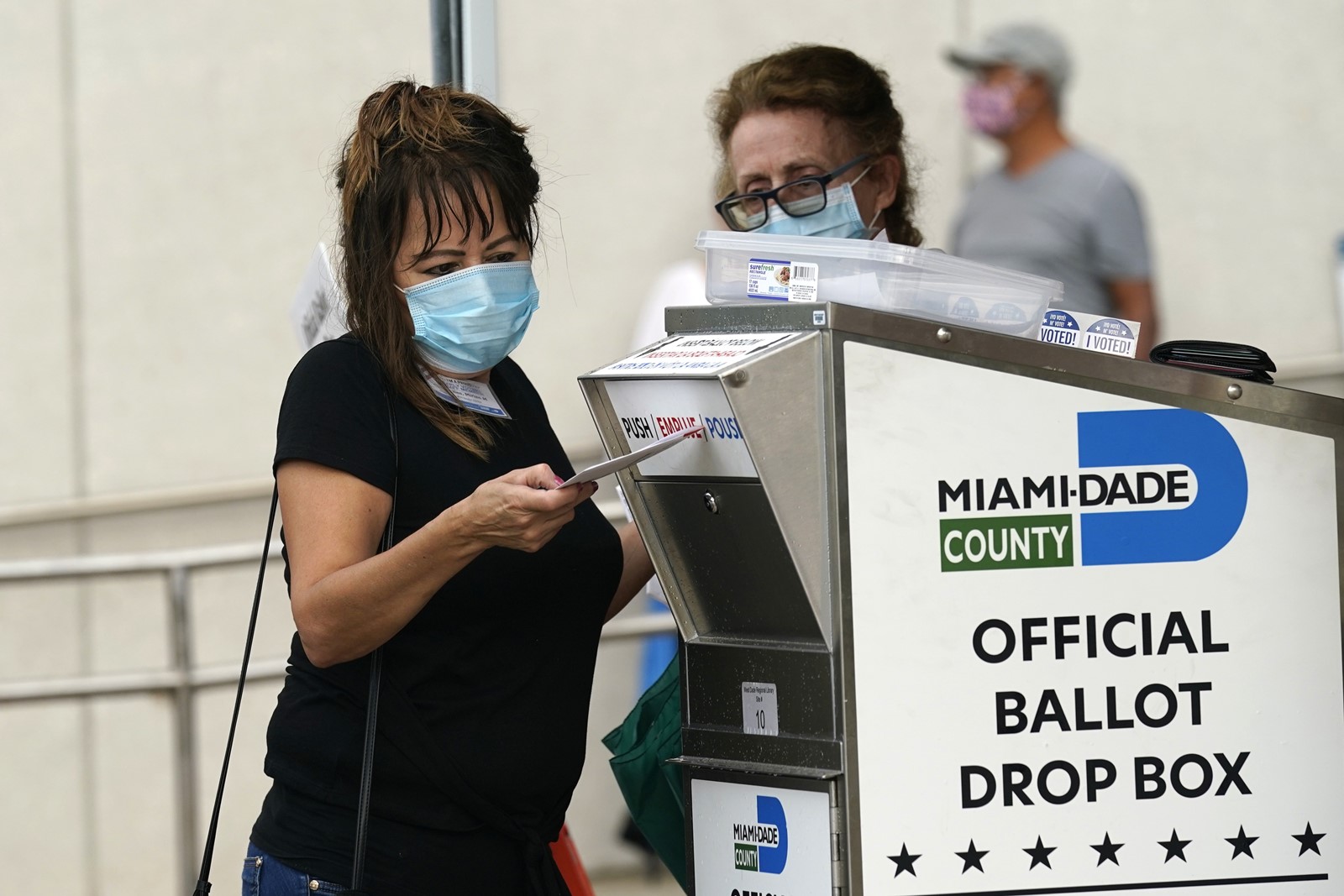 SOME BATTLEGROUND STATES — such as Pennsylvania, Michigan and Wisconsin — could take days to count their votes, while Florida is expected to finish soon after election night. Above, early voting in Miami. (Lynne Sladky Associated Press)
PREVIOUS IMAGE

While we’re all beyond ready to see this election — and this year — come to an end, don’t be so sure we’ll get that closure on Nov. 3.

Millions of Americans may have already voted, but there’s an unprecedented amount of mail-in voting that has to be counted and a dizzying array of rules for how that process will work in each state.

Don’t worry, we’ve got you covered.

But it’s hard to say for a variety of reasons, including the fact that a record-breaking number of voters are taking advantage of expanded mail voting options.

Each state has different rules regarding when election workers are allowed to start preparing ballots for counting. Before a voter’s selections are tabulated, election officials need to verify the signatures on ballots, open them, flatten them out and scan them through equipment

States like Pennsylvania, Michigan and Wisconsin — which went for Trump in 2016 — could take days.

Then there’s the issue of when ballots are due. At least five battleground states will accept ballots after Nov. 3 if they’ve been postmarked on or before that day. Others require absentee ballots to be received by election night. And there have been court battles, with a number of Republican legislatures and governors aiming to stop expansions meant to ease voting amid a pandemic.

So if you’re looking for the legal answer, Foley said, “we officially have a president-elect when Congress meets on Jan. 6 to receive the electoral votes from the states.”

“Of course, none of us want to wait until Jan. 6 for the answer,” he said.

Because there’s no national standard.

Congress has the constitutional authority to pass uniform laws for federal elections, but have chosen “largely not to exercise that power,” Foley said.

“For historical and cultural reasons, there’s been a strong understanding of letting elections be conducted pursuant to state law,” he said. “That’s just our tradition.”

As a result, you have states — like Arizona, Florida and North Carolina — that allow ballot processing weeks ahead of Nov. 3. And then there are states — like Pennsylvania, Wisconsin and Michigan — whose laws prohibit ballot preparation before election day. In Michigan, Gov. Gretchen Whitmer in October signed a bill allowing clerks in cities with populations of at least 25,000 to begin opening and sorting ballots Nov. 2.

Americans rely on TV networks such as ABC, CNN, Fox, NBC and CBS as well as news agencies like the Associated Press to project winners in each state. These aren’t based on random guesses, but on polling data and vote counts.

Every major TV news organization has a “decision desk,” where statisticians and political analysts look at historical voting trends, polling data and the actual vote count as it comes in before calling a winner in each state.

In 2017, Fox News and the Associated Press broke away from the consortium of news outlets that pool resources to do exit polling during elections — finding the in-person questioning at polling locations to be less reliable.

This year, Fox News will test its Voter Analysis System, a survey developed with the Associated Press and the National Opinion Research Center at the University of Chicago, for the first time in a presidential race. The survey, compiled from telephone and internet responses, queries more than 100,000 people on their candidate preferences.

Don’t forget, though, that these are not final results from states but unofficial network projections. (Shout out to the awkwardness of 2000 when networks had to retract the call for the winner in the presidential election between Vice President Al Gore and Texas Gov. George W. Bush).

I was 8 at the time, so I understand your memory lapse.

That year, networks declared Gore the winner, then retracted. They then declared Bush the winner, and again had to take it back.

After seeing the projections announced on television, Gore called Bush to concede the election. But by 3:17 a.m. Eastern, the Florida secretary of state’s website showed Bush’s lead shrinking to 565 votes. Gore called again to rescind his concession.

What came next was several weeks of legal and political skirmishing over spoiled ballots, military votes, proposed recounts and assorted other election minutiae. (Remember butterfly ballots and hanging chads?) The U.S. Supreme Court ultimately voted 5 to 4 in favor of stopping a statewide Florida recount — delivering the electoral college victory, and thus the presidency, to Bush. Gore ended up winning the popular vote.

Look for Obama-Trump counties (places that were blue in 2008 and ’12 and then flipped red). Some examples: Erie and Luzerne counties in Pennsylvania and Macomb in Michigan.

Pay attention to the suburbs, which are always a battleground in presidential races. Maricopa County in Arizona includes Phoenix but also a lot of sprawling suburbs. Republicans used to have a lock on this county, but demographic changes and anti-Trump sentiment put it (and the state) in play.

And, possibly most important, in Florida keep an eye on Duval, Miami-Dade and Pinellas counties. Democratic nominee Joe Biden will need to come out of Miami-Dade County with at least 250,000 votes, according to Democratic pollster Tom Eldon.

“It isn’t necessarily a swing county, it isn’t competitive, but it’s the most critical county apart from Broward,” Eldon said. “You want to watch turnout and watch margin.”

It would be difficult for Trump to win the state if he doesn’t carry Pinellas County, Eldon said.

And if Trump loses Florida?

“It has the potential to be a game-over state,” Eldon said.

The “red mirage” refers to an election-night count of in-person votes that would suggest that Trump has won — even though there are still millions of votes for Biden that need to be tabulated.

To explain the red mirage, let me throw out another couple of words: blue shift.

The blue shift is a phenomenon that’s developed over the last couple of decades, wherein the secondary count of ballots (such as mail and provisional) that can’t be completed on election night “tends to be more favorable to Democratic Party candidates,” Foley said.

Because of COVID-19 and the rhetoric over vote by mail, there’s a belief that Republicans are more likely to cast ballots in person on election day, whereas Democrats will send in their ballots.

“There’s been some speculation that we can see preliminary results on election night look more red in multiple states — and that’s the red mirage — only to be overcome, perhaps, by the blue shift,” Foley said.

But the reality of that is more complicated. Because of a number of Democratic voters who have tried to vote early, those could be some of the first returns on Nov. 3 creating a “blue shift” early on with a “red shift” coming later.

Moral of the story: Don’t count your chickens — be they red or blue — before they hatch.

There is no requirement that a winner be known election night, and states do not finalize results that night. But that hasn’t stopped Trump from calling for results to be finalized Nov. 3, even before all the votes are counted.

“It would be very, very proper and very nice if a winner was declared on Nov. 3 instead of counting ballots for two weeks, which is totally inappropriate,” Trump said.

It might be nice, experts said, but counting every vote is not inappropriate — it is, in fact, kind of the point.

Trump has complained for months about mail voting, making the unsubstantiated claim that there are “big problems and discrepancies with Mail In Ballots.” Experts say there is no evidence of widespread fraud in absentee voting, but the president has said repeatedly that the election will be “rigged” — a claim he also made in 2016.

Critics believe Trump is aiming to delegitimize the results of an election he might lose, including a scenario in which he is ahead on election night, when millions of mail ballots have yet to be counted.

But, Foley stressed, “the only thing that can exist on election night are preliminary results.”

“Whether it’s the president or anybody else, it’s just inaccurate to think that you could have an answer on election night that’s an official, legal answer,” Foley said. “What the candidates say doesn’t have any legal status.... The legal process will go about counting the ballots pursuant to law.”