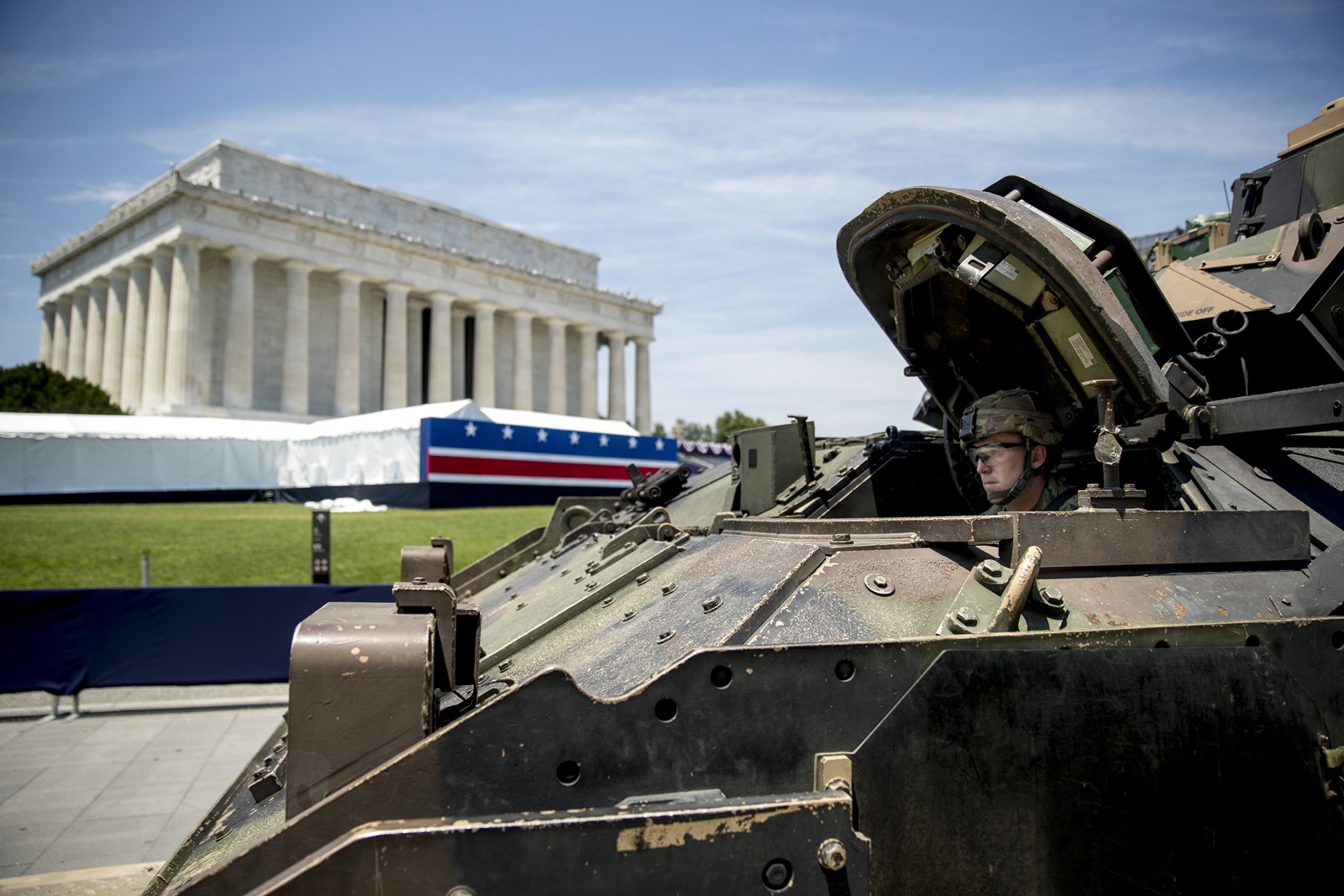 ONE OF TWO Bradley armored fighting vehicles waits to be driven into place this week in front of the Lincoln Memorial for July 4. (Andrew Harnik Associated Press) 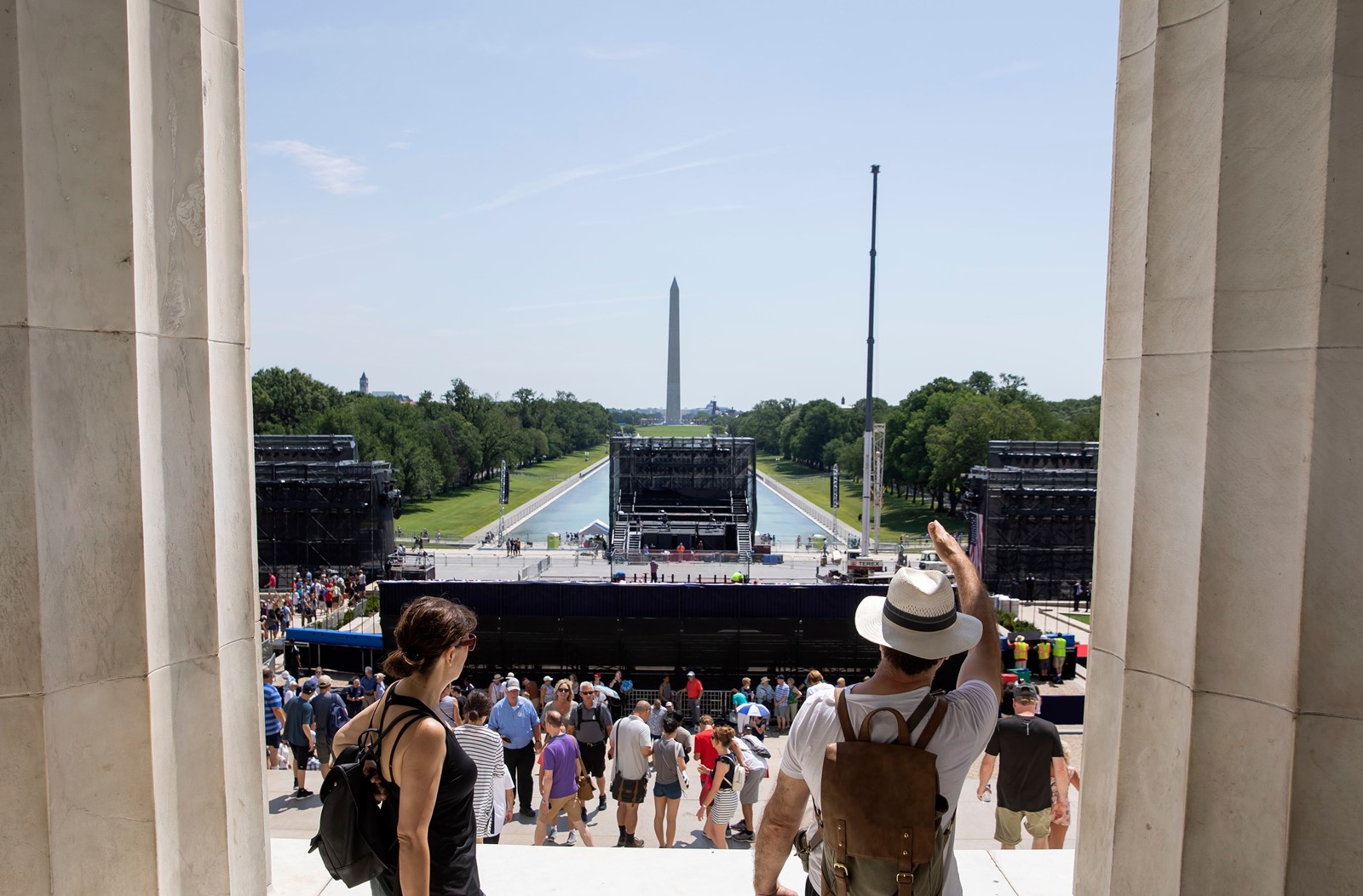 Government watchdogs say President Trump has moved more audaciously than any predecessor in modern times to use the power of the White House to further his reelection effort, dispensing with even the appearance of separating the trappings of his office from his political imperatives.

While Trump is hardly the first incumbent to take advantage of the White House for political purposes, his conduct and that of his appointees have set a new standard which in some cases has openly flouted federal law.

Their actions have drawn particular attention in recent days because of two events:

Trump, breaking with tradition, is preparing to speak at the Fourth of July celebration on the National Mall, deploying tanks and fighter jets for an extravaganza for which the Republican National Committee is providing VIP tickets to big donors. Critics say the event, which has long highlighted nonpartisan national unity, is being transformed into a costly, taxpayer-funded “Make America Great Again” rally.

And Trump has brushed aside a recommendation by an independent ethics enforcer whom he appointed that his counselor, Kellyanne Conway, be fired for repeatedly violating and mocking a federal law known as the Hatch Act, which prohibits employees from using their official position for partisan purposes.

“Blah, blah, blah,” Conway told a reporter who asked her about an earlier violation. “Let me know when the jail sentence starts.”

The answer to that appears to be never, since the law makes Trump responsible for enforcing the act against his own staff members, and he has defended Conway, saying the Hatch Act, which has been upheld twice by the Supreme Court, unfairly infringes on her right of free speech.

But the concern over politicization goes considerably beyond Conway’s case.

Trump’s official events, paid for with taxpayer dollars, often follow a script nearly identical to his raucous campaign rallies: “God Bless the U.S.A.” playing over the sound system, followed by dire warnings of a Democratic takeover and a selection of jabs aimed at “Crooked Hillary,” “Crazy Bernie” or “Pocahontas.”

There are even tangible promises attached to explicit requests to cast votes.

“If we win this election, which is just 16 months away, we’re giving you a brand-new I-10 bridge,” Trump told the workers at a natural gas export facility in Hackberry, La., during a speech that was billed as official.

The White House would not comment on whether the campaign paid any of the expenses and the campaign did not respond to questions. On the broader issue of whether Trump has abused his position, White House officials declined to comment on the record.

Ethics watchdogs say Trump is abusing presidential power and ignoring guardrails that have constrained his predecessors.

In previous administrations of both parties, although political activities took place, department heads and White House staff went through elaborate procedures to avoid mixing official business with campaigns — holding certain events away from the White House, for example, or avoiding attendance at fundraisers.

Trump, by contrast, has turned the administration into another wing of the campaign operation — a Rose Garden strategy on steroids — where top officials tweet his campaign slogan, denigrate his political opponents from the White House lawn and create policy intended to improve Republicans’ electoral prospects.

“It’s a huge problem,” said Craig Holman, who heads government affairs for Public Citizen, a left-leaning accountability group. “Most people don’t quite get it, how extensive the abuses are in the Trump administration.”

Democrats fear Trump is adding to his incumbency advantage in the 2020 election, where his official campaign is already out-raising Democrats and building a highly sophisticated digital operation.

In recent weeks, for example, the White House Twitter account, a government-run platform that reaches 18.7 million people, has broadcast criticism of Joe Biden and Hillary Clinton along with Trump’s commentary on his poll numbers, “Radical Left Democrats” and Republicans, “THE PARTY OF THE AMERICAN DREAM!”

During his campaign kickoff in Orlando, Fla., last month, Trump drew an explicit link between the official Fourth of July celebration and his campaign, urging supporters to “come on down” and bring flags. The Republican National Committee is giving top donors tickets to the event, according to a donor and an RNC official who confirmed a report first published by the Huffington Post.

A senior administration official, speaking on condition of anonymity, said Trump is not planning a political speech and will focus on patriotism, the flag, the military and the nation’s birthday.

Secretary of State Michael R. Pompeo spoke to farmers and called in to a talk radio station in Iowa, a key swing state, to defend Trump’s trade policies earlier this year. His remarks broke from the long-standing tradition of the nation’s top diplomat staying away from domestic politics.

Mercedes Schlapp, who stepped down this week as White House director of strategic communications, showed up at a rally in Miami with Vice President Mike Pence on Tuesday to kick off a “Hispanics for Trump” group. Though she clarified that she was on her personal time, she was introduced with her official White House title.

Sarah Huckabee Sanders, who just left her job as press secretary, was called to the stage at Trump’s campaign kickoff and several other rallies. Others, including immigration officials, have made Fox News appearances in which they have strayed from their area of expertise to push talking points that comport with Trump’s campaign messaging.

“What’s become clear at this point is that they’re very much aware of what the rules are and that they’re not supposed to be doing this, and they don’t have any interest in complying,” said Noah Bookbinder, executive director of Citizens for Responsibility and Ethics in Washington, a liberal watchdog group.

In Conway’s case, for example, the Office of Special Counsel, an independent agency unrelated to the office that conducted the Russia inquiry, said her repeated discussions of Democratic and Republican candidates and races on television “erode the principal foundation of our democratic system — the rule of law.” Lack of punishment would send a signal to the entire federal workforce that restrictions against politicking don’t matter, the officials said.

Trump has supported her decision to ignore a request from Congress that she testify about her multiple violations. She is now facing a subpoena from the House of Representatives.

The Hatch Act does not apply to Trump or Pence. Other appointed officials are subject to the law, but it is up to the president to enforce it for his own appointees, meaning he has no legal obligation to punish Conway.

At least 12 high-level appointees in Trump’s administration have been found in violation of the act, far more than the number cited in the entire eight years of President Obama’s tenure.

Julián Castro, Obama’s Housing secretary who is now running for president, was one of two Cabinet secretaries cited in the Obama years. He fielded a journalist’s questions about the 2016 presidential race and his own chances of being named as Clinton’s running mate during an interview in which he was acting in his official capacity. Also during the Obama administration, Health and Human Services Secretary Kathleen Sebelius was cited while Labor Secretary Hilda Solis was investigated before she resigned to become an L.A. County supervisor.

Within days of Conway’s latest violation, Trump’s daughter Ivanka, a presidential advisor, was accused of violating the act when she tweeted a picture of herself and her father from his 2016 announcement launching “a campaign that would forever change America.”

The head of the office that has investigated those claims and found violations, Henry Kerner, is a Trump appointee who serves a five-year term as head of the Office of Special Counsel.

Kerner spent much of his career prosecuting gangs in Los Angeles County and then worked for Republican lawmakers known for partisan zeal, including former Reps. Darrell Issa of Vista and Jason Chaffetz of Utah.

“We just don’t want federal workers to engage — while they’re on duty — in campaigning,” Kerner said in an interview.

The vast majority of his office’s enforcement actions involve lower-level employees, like an Internal Revenue Service employee who urged callers to vote for Obama. The Hatch Act was passed in 1939 at the urging of conservatives angry with President Franklin D. Roosevelt.

Kerner said his attempts to rein in Conway have nothing to do with her free-speech rights.

When Conway speaks with Fox News, CNN and MSNBC from the White House lawn, “she goes as an official, she doesn’t go as Kellyanne Conway,” he said.

“She’s speaking on behalf of the president of the United States, and there are some restrictions.”