Republicans tout the state’s system but still want to restrict access — part of a wave inspired by Trump. 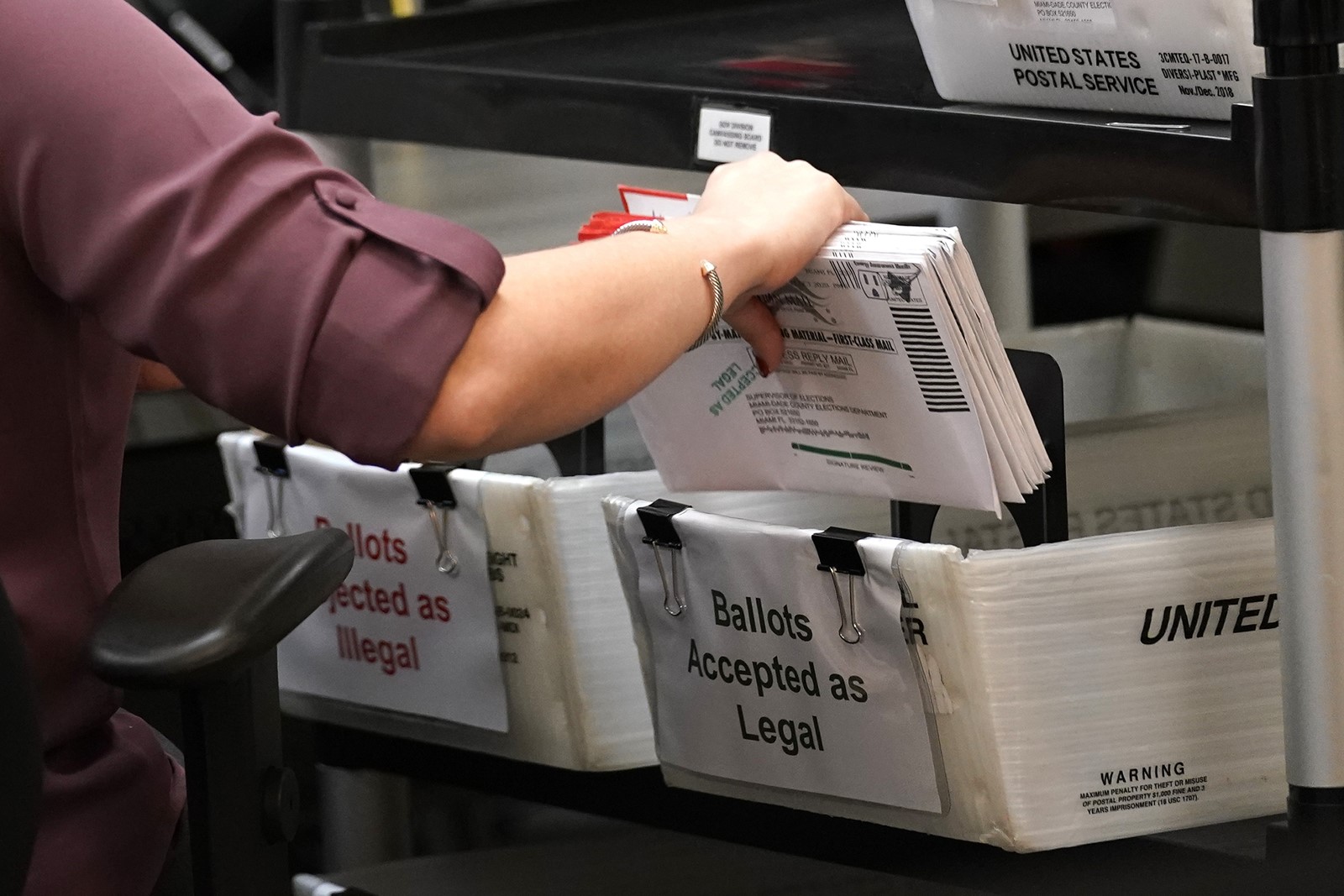 A WORKER sorts mail-in ballots at the Miami-Dade County Board of Elections in Doral, Fla., in October. A record 4.9 million Floridians voted by mail in 2020. (Lynne Sladky Associated Press)
PREVIOUS IMAGE

Florida was a model citizen when it came to elections in 2020. The state showed off its years of voting reforms. Results were reported quickly and accurately. Turnout soared.

It was all overseen by GOP officials. And President Trump won the state, continuing Republicans’ growing advantage in Florida.

Yet three months later, Florida Republicans have set out to overhaul the state’s voting system anyway. GOP Gov. Ron DeSantis on Friday proposed an array of voting changes, and state lawmakers have introduced legislation that makes it harder to vote by mail. To explain the efforts, Florida Republicans point not to evidence of problems but to the potential for voter fraud and suspicion about the process.

“We want everyone to vote, but we don’t want anyone to cheat,” DeSantis said Friday.

Florida Republicans’ push to change voting laws shows how deep false claims about mass voter fraud spread by Trump have burrowed into Republicans’ belief system. The party is stampeding to solve a problem that most nonpartisan experts and courts say does not exist. Their efforts are threatening to dismantle years of bipartisan moves to boost voting in several states, including places where the GOP has thrived under the current system.

And it would result in making it more difficult to vote.

“We cannot comprehend where they’re coming from,” said Anjenys Gonzalez-Eilert of Florida Common Cause, noting the GOP has long been a supporter and beneficiary of mail voting in the state.

Similar efforts are being repeated across the country. State Republican lawmakers in Georgia, Arizona and Pennsylvania have introduced voting bills, many aimed at curbing mail voting.

The legislation reflects Republicans’ widespread belief that new rules making it easier to vote by mail during the pandemic largely benefited Democrats and caused “irregularities.” Although there were no signs of widespread irregularities, they often point to vote totals tilted in Democrat Joe Biden’s favor as mail ballots were counted days after election day — a pattern that was new to many states but not a sign of fraud.

But that was not an issue in Florida. It has long allowed its election offices to start the laborious process of preparing mail ballots for counting — removing them from their envelopes and verifying voters’ signatures — well before election day. Although ballot counts in many states new to mail voting dragged on for days, Florida’s count was quick and efficient.

There was no evidence of fraud in Florida. Of the more than 60 legal cases Trump and his allies brought challenging the election, none was filed in Florida. (Even in those states where Trump claimed there was fraud and tried to overturn the election, dozens of courts rejected his legal claims, and no significant cases were proved.)

Florida officials take pride in their recent record. Ever since the drama of the 2000 presidential election recount — when “hanging chads” turned the state into a national joke — the state has worked to shed its image as the exemplar for elections gone wrong.

Election officers have worked to shore up trust in the state’s election system, by changing how ballots are designed, modernizing vote-counting equipment and investing millions of dollars to protect against cyberthreats.

Even DeSantis took credit for November’s performance.“We did it right,” he said Friday before supporters in West Palm Beach.

Still, he argued for tightening voting laws. His proposal includes restricting the use of drop boxes where voters can deposit mail ballots and preventing other people from dropping off voters’ ballots, a practice many label “ballot harvesting.” DeSantis also seemed to endorse the Republican bill that would make mail balloting harder by requiring voters to request a mail ballot every year, rather than allow them to make one request that stands for two years’ worth of elections.

The proposal is notable because for years Republicans dominated vote by mail in Florida, and it was embraced by the state’s many older voters. It helped the GOP cement a durable statehouse majority and narrowly win statewide races.

But the Republicans in Florida lost that edge last year. Trump railed against mail voting, and GOP voters’ trust in the system sank, according to polls. In Florida, his complaints alarmed state Republicans, and Trump sent out tweets stating that in Florida, where he voted by mail, the system was “Safe and Secure, Tried and True.”

In the end, Democrats in the state outvoted Republicans by mail for the first time in years as a record 4.9 million Floridians voted by mail. Democrats cast 680,000 more mail ballots than Republicans did.

The new bill would essentially wipe those new Democratic voters from the rolls ahead of 2022, when DeSantis and Florida Sen. Marco Rubio lead the list of incumbent Republicans up for reelection.

“There’s no doubt that these are voter suppression efforts,” said Stipanovich, adding that the tactic in Florida could make voting by mail more difficult for people who are poor, less educated and don’t have extensive experience in voting.

Republicans have pushed a similar change in Arizona, another state where GOP lawmakers helped create a bipartisan, popular system but are now moving to change it. Their effort was dealt an early blow this week when the Arizona Senate voted down a bill to purge about 200,000 people from the state’s absentee voter list. One Republican senator joined all 14 Democrats to kill the measure in a 15-15 tie.

In Georgia, a formerly red state that Democrats narrowly won in November and then in two Senate runoff contests in January, lawmakers held a heated hearing over Republican proposals to curtail mail voting and eliminate early in-person voting on Sundays, when Black churches often send parishioners to the polls.

In Florida, state Sen. Dennis Baxley, the bill’s author, says he isn’t trying for any partisan advantage but simply wants to reverse a 2007 measure that created the two-year window.

Notably, Baxley was the lawmaker who helped pass that measure. He now says he can’t remember his reasoning at the time. “Lots has happened in 13 years,” he said. “I just think it’s time for a reset.”