Twin Towers inmate died from high levels of a drug prescribed for his mental illness. 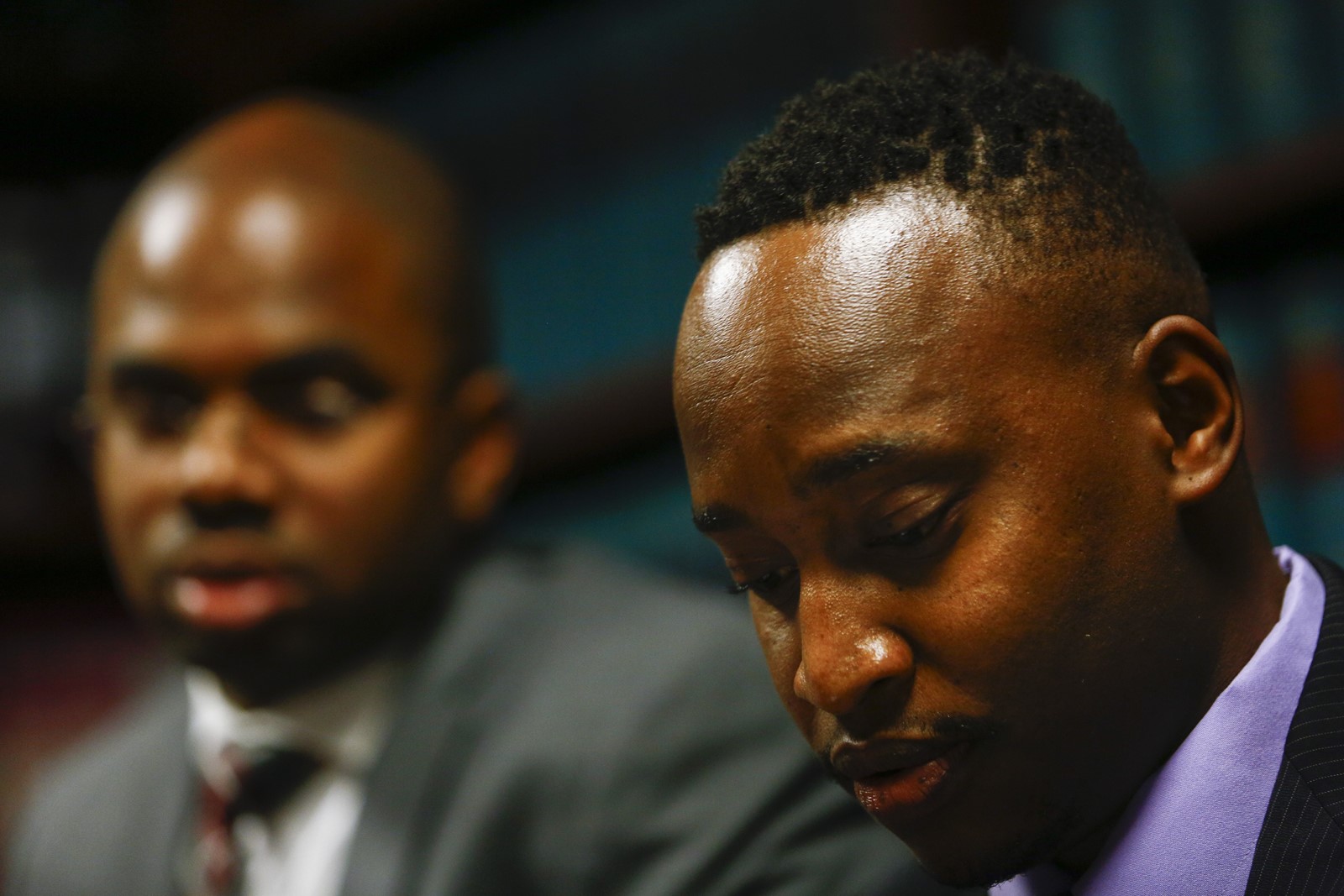 LEON NYARECHA speaks at a news conference about the death of his brother Lewis Nyarecha, who was found unresponsive in June by a fellow inmate at Twin Towers jail. The family has sued, alleging negligence. (Kent Nishimura Los Angeles Times)
PREVIOUS IMAGE

Lewis Nyarecha was found unresponsive on a top bunk at the Twin Towers jail in downtown Los Angeles by a fellow inmate. He had missed dinner the night before and breakfast that day.

Two L.A. County sheriff’s deputies began to haul the 25-year-old Nyarecha off the bunk, only to drop him, slamming the back of his head on a metal desk and sending blood gushing.

Though he received CPR, Nyarecha would be declared dead on a June morning last year. The county coroner found the cause of his death was quetiapine toxicity; he was given the drug because he was schizophrenic.

Seeking answers and a change in the system, Nyarecha’s family filed suit Thursday against the L.A. County Sheriff’s Department, alleging negligence in his death and battery over the incident that caused the head wound. Nyarecha had struggled with his mental illness and had been arrested on suspicion of trespassing.

“At the time of his death he had a lethal dose of prescription medication in his body. We believe the Sheriff’s Department was responsible for Mr. Nyarecha’s death,” said Jovan Blacknell, an attorney for the family.

“I would like to see some change to how the mentally ill are treated in the jail,” said the inmate’s brother Leon Nyarecha. He is no stranger to the justice system, working inside the district attorney’s office making videos that sometimes feature Dist. Atty. Jackie Lacey.

He said his brother, a gifted musician who was educated at a Swiss college, struggled with mental illness. “The day he died was the worst day of my life,” Leon Nyarecha said, speaking alongside the attorneys at a news conference in a Culver City law office.

But Blacknell and fellow attorney Anthony Will-oughby said that when Nyarecha entered the jail system, records show, he “was not eligible for self-medication” and his safety criteria included assignment to a lower bunk. The lawsuit alleges that Sheriff’s Department officials allowed the man to self-medicate and gave him a top bunk.

The Sheriff’s Department declined to answers questions about the lawsuit. “We reserve comment on pending litigation,” Capt. Darren Harris said.

According to jail records included in the lawsuit, the Sheriff’s Department repeatedly increased Nyar-echa’s medication. On April 23, 2018, records show, medical staff increased his dose of the antipsychotic medication, and a day later, he fell down in his cell and was hospitalized.

Nyarecha fell again May 5 when “he was suddenly overcome with dizziness and collapsed,” cutting open his head, according to the lawsuit. Sheriff’s Department officials, according to the suit, did not tell L.A. County-USC Medical Center about the medication, and the cause of his collapse was attributed to dehydration or meningitis.

The lawsuit claims that on May 22, medical staffers increased Nyarecha’s dosage of quetiapineto 600 milligrams — a 300% increase from his initial amount — to be taken in a single dose before sleep.

Blacknell said those doses were not meant to be self-administered. Given Nyarecha’s condition, Blacknell said, he should have been subject to regular safety checks, not left unattended for 18 hours.

The suit says that according to jail records, Nyarecha was not checked on from 4 p.m. June 5 until after 11 a.m. June 6, when an inmate trustee found him lying on his back, unresponsive, “with colored mucus coming from his nose and mouth and vomit around him.”

According to the lawsuit, investigators found “approximately 10 medication cups” in his cell, “several of which contained unused medication.”

A private autopsy conducted for Nyarecha’s family agreed that the cause of his death was high levels of the medication, not the head injury.

The family’s attorneys said his death came despite repeated oversight efforts by the courts and the federal government over the county’s jail system.

“The county has been under a court order as far taking care of the inmates and individuals with mental illness. They totally failed in that regard. They failed to take care of this individual. They overmedicated him,” Willoughby said. “That is why we are seeking compensation for the family.”

The attorneys said Leon Nyarecha was ostracized inside the district attorney’s office and his role reduced after he raised concerns about his brother’s death.

Leon Nyarecha has also sued Lacey, alleging work discrimination, and said that after his brother’s death the district attorney called him into her office and said he should delay taking any action until “he knew all the facts.” The suit claims he was subsequently ostracized in the office.