Trump to visit as doubt grows over homelessness plan 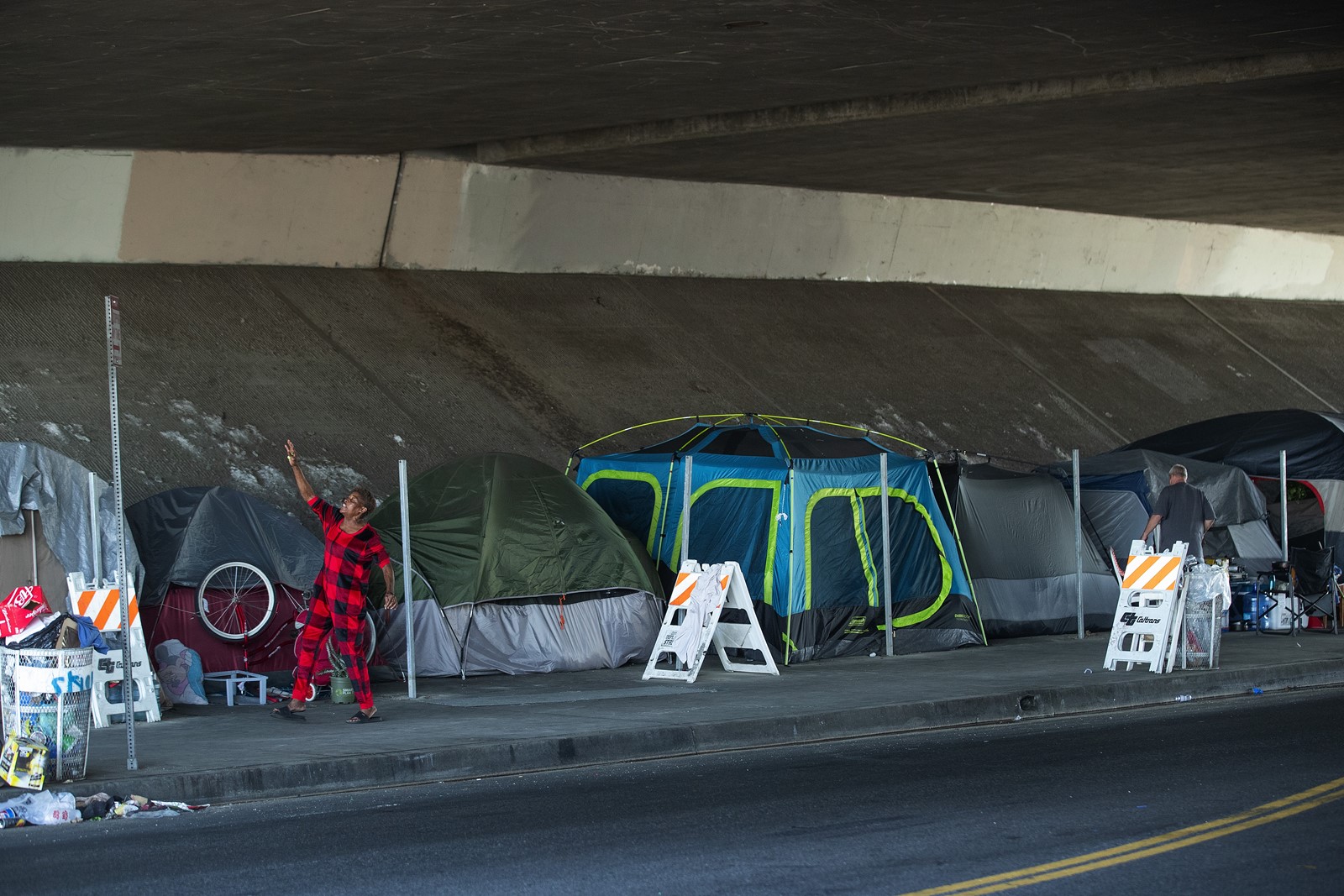 PRESIDENT Trump has criticized California in recent months over the issue of homelessness. Above, an encampment in Pacoima. (Mel Melcon Los Angeles Times)
PREVIOUS IMAGE

President Trump is set to arrive in California on Tuesday with little clarity over his plans to address the state’s homeless crisis and growing doubts about how much the federal government could actually do to change conditions on the streets.

Trump is in the state for a two-day swing with stops for fundraising in Palo Alto, Beverly Hills and San Diego. Although there are no public events scheduled, he is likely to take on the issue of homelessness, which he has used in recent months to bash the deep-blue state in advance of the 2020 election.

To the dismay of some local officials, the administration has said little publicly about its plans. Some speculate that the goal is to clear homeless encampments by moving people into government-run shelters on federal land.

On Monday, the Trump administration floated a new goal: deregulation of the housing market to increase the supply of apartments and condos and homes.

Tom Philipson, acting chairman of the White House Council of Economic Advisers, discussed a new report focusing on the failures of Los Angeles and other coastal cities — most of which are run by Democrats — to quell their rising homeless populations.

Through deregulation of the housing market, he said, homelessness in the United States would drop by 13% overall, 54% in San Francisco and 40% in Los Angeles. He declined to elaborate on those statistics and what “deregulation” might entail. He also declined to detail how the federal government might aid California and refused to address reports about using federal property for new homeless shelters.

“Current deliberations on our policy agenda going forward is not something that this report addresses, and I’m not going to address it today,” Philipson said on a conference call.

He also suggested that law enforcement should play a bigger role in addressing homelessness.

Still, legally, there are certain things the Trump administration cannot do.

“There is no legal basis to force people into shelters,” said Nisha Vyas, directing attorney of Public Counsel’s Homelessness Prevention Law Project. “The state doesn’t have the authority to seize people or their property and both the state and federal Constitution prohibit unlawful search and seizure.”

It is yet another example of a Trump policy that might appeal to his political base, but will be difficult, if not impossible, to implement.

In the past, such efforts have been the domain of local government, which, in recent years, have been prevented by the courts from using law enforcement to enforce “anti-camping” laws on city streets. These laws had been widely used as a cudgel to move homeless people from public spaces.

After a contentious debate, San Francisco in June instituted a pilot program that allows the city to forcibly remove drug users with an obvious mental illness from the streets. But most homeless people don’t meet the threshold.

Last week, representatives from the Department of Justice discussed possible “workarounds” with L.A. law enforcement union officials to deal with court settlements, rulings and lawsuits that have limited the way the Los Angeles Police Department can carry out enforcement efforts at encampments.

Politicians have been searching for solutions.

The idea is in its early stages, and Newsom hasn’t endorsed the plan. But Ridley-Thomas and Steinberg want to compel cities and counties to build enough large shelters to accommodate any homeless person who asks to come indoors.

They also want to require that homeless people be forced to accept that shelter if offered. How that would be enforced is unclear.

For Trump, he has indicated in interviews that scenes of homeless people who appear to be mentally ill and walking around mounds of trash in cities are unacceptable. In fact, he said, they’re “inappropriate.”

During a speech at a Republican conference in Baltimore on Thursday, Trump said that his administration has given “notice” to California, though it was unclear what “notice” was given.

“Clean it up,” he said. “You’ve got to do something. You can’t have it. These are our great American cities and they’re an embarrassment.”

Harmeet Dhillon, a member of the Republican National Committee who lives in San Francisco and is attending Trump’s Palo Alto fundraiser, said she’s glad the president is focusing on the issue.

“The quality of life has gone down for everybody,” she said. “It is dystopian.”

When talking about homelessness, Trump’s aides like to cite an executive order the president signed in June to “confront the regulatory barriers to affordable housing development, a leading cause of homelessness.”

While homelessness wasn’t something he discussed regularly on the campaign trail, the issue has become an easy way to criticize the pitfalls of cities with Democratic leaders that didn’t vote for him.

In the past, Trump has pushed the limits of his authority, routinely issuing executive orders and proclamations that have been met with legal challenges or turned out to be hollow. Accustomed to being CEO of a private company, he has occasionally struggled to figure out how to work the bureaucratic levers of a sprawling federal government.

Maria Foscarinis, executive director of the National Law Center on Homelessness & Poverty, said Trump is taking the wrong approach to homelessness by talking about it as a criminal justice problem, adding that the federal government does not have the legal authority to sweep people up and force them into shelters.

“The reason people are on the street isn’t because people are refusing the shelter,” she said. “It’s because there is literally no place to go. Rounding people up and forcing them into shelter would be a very bad idea, and it would probably violate all kinds of rights.”

California politicians are, however, ready for the federal government to lend a helping hand — if it comes in the form of more housing vouchers for the state’s renters.

In a letter issued Monday and signed by Gov. Newsom, and mayors and county supervisors from across the state, they asked for 50,000 more vouchers that would aid people most affected by California’s housing crisis. They also urged the Trump administration to provide incentives to landlords to accept vouchers.

“That’s a pretty remarkable opportunity, if they’re sincere in their desires,” Newsom said at a news conference. “If they’re insincere and this is, God forbid, about something else — politics, not good policy — then they’ll reject it outright. I hope that’s not the case.”