A call to reopen in L.A.

Parents and students push, saying science and better conditions are on their side. 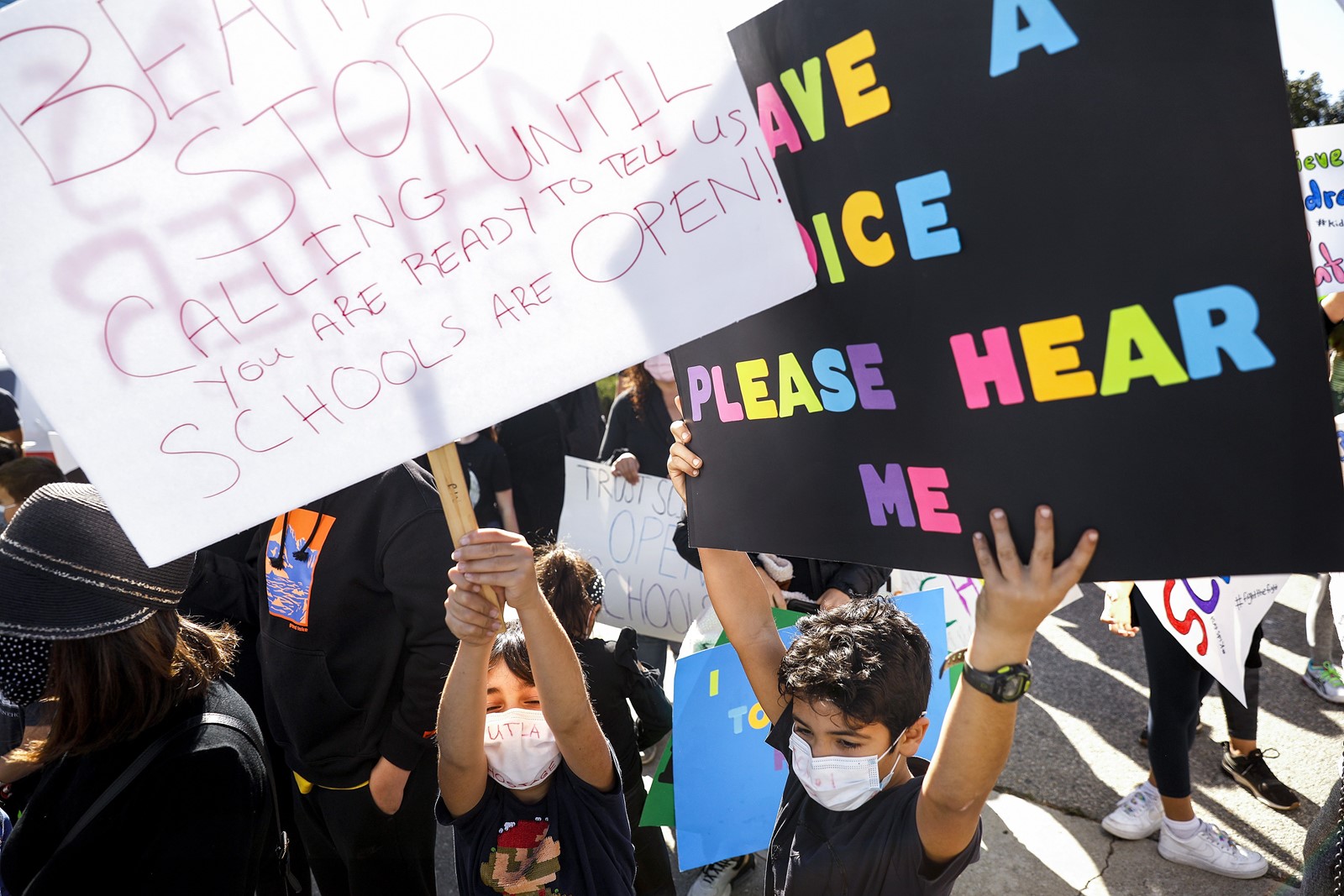 THE RALLY at the Federal Building drew more than 200 parents and students from more than 20 different schools. “For a year now, they’ve been telling us we will open schools when they are safe,” said one parent. (Christina House Los Angeles Times)
PREVIOUS IMAGE

When Los Angeles parent Cynthia Rojas heard that federal experts and local health authorities said elementary campuses could reopen, she was ecstatic. But then reality hit her: Campuses in the L.A. Unified School District would not reopen anytime soon.

That disappointment became a defining moment that brought her and other parents to a protest Monday outside the Federal Building in West Los Angeles — part of the growing momentum in some parts of Los Angeles, including the Westside, to reopen public schools.

The United Teachers Los Angeles union is resisting this push, which it says is in part rooted in white privilege. Los Angeles schools Supt. Austin Beutner says coronavirus infection rates in neighborhoods served by the district, including South Los Angeles, remain too high and he supports vaccinations for school staff, which the union is demanding.

Beutner said Monday that the average county coronavirus rate that permits elementary schools to reopen is misleading. The county “spans more than 4,000 square miles and communities with vastly different family circumstances where COVID has had vastly different impacts,” he said.

Parents such as Rojas simply want the option for their children to return to class.

“For a year now, they’ve been telling us we will open schools when they are safe,” Rojas said during Monday’s demonstration, which drew more than 200 parents and students from more than 20 schools. Rojas was paying attention when the U.S. Centers for Disease Control and Prevention said it was possible to reopen K-12 campuses safely — even with significant spread of the coronavirus, even without a vaccine for school staff. And she got excited when L.A. County Public Health Director Barbara Ferrer announced that the county had met the threshold for reopening elementary campuses.

“I was so excited. I mean, I couldn’t even sleep that night,” Rojas said.

While some school systems quickly ramped up, leaders of L.A. Unified and the union are flying a caution flag: They want further reductions in infection rates and vaccines for school staff.

“And so, the L.A. County Health Department gave them the clear. And then, LAUSD and UTLA said: ‘Oh no, but it’s still not safe.’ And I think that was a big turning point for a lot of us parents.”

The union leadership is not backing down.

“It is unfortunate that educators are being targeted, and the pressure of preventing an unsafe return falls to us while our students and their families face economic devastation, illness and death,” UTLA President Cecily Myart-Cruz said in a statement. “Local and state officials did not create the right conditions to return to schools for in-person instruction. They prioritized indoor malls, outdoor dining, gyms and card rooms while infection rates soared and school buildings remained closed. Now educators are being vilified for trying to protect our students and our communities.”

In particular, the union has said, it is looking out for low-income communities of Black and Latino families — where the virus has brought disproportionate death and economic hardship.

Next week, union members — including teachers, nurses, librarians and counselors — will be voting on whether “to refuse to return” unless three conditions are met, according to the union.

First, L.A. County must be out of the state’s “purple tier,” which means daily average infection rates would have to fall to an adjusted rate of seven or fewer cases per 100,000 residents. The current case rate is 20 per 100,000. It has been dropping fast but the standard of seven per 100,000 has been achieved for only one week since August, when the tier system went into effect.

Second, all staff members required to return in-person must be either fully vaccinated or have been provided access to full vaccination. Third, comprehensive safety measures must be in place, such as personal protective equipment, social distancing, ventilation and a cleaning regimen.

While Beutner has said campuses are ready, the union for nonteaching workers has asserted that, even before the pandemic, the district was understaffed for cleaning, per industry standards.

The teachers union also points to a district parent survey that closed in early December. It indicated parents of two-thirds of students — which works out to about 315,000 — would want their children to remain in distance learning, according to preferences at the time. This included 70% of Latino parents, 62% of Black parents and 42% of white parents. According to the survey, parents of about 150,000 students would support a return to campus.

It is unclear if parent views have shifted during a deluge of developments over the last three months.

The teachers union on Monday accused outside forces of trying to “unsuccessfully drive a wedge between educators and the community. UTLA remains committed in the face of mounting political pressure to make it safe to save lives,” the union statement said.

For those at the Monday protest, however, the wedge is firmly in place — even among parents who supported teachers in a six-day strike two years ago.

“We felt they deserved better pay and better benefits and, and we supported them then. We still support our teachers now,” said Philip Klapardo, a parent at Warner Avenue Elementary in Westwood.

He added: “You have to be reasonable. There has to be some level of risk-taking. You just can’t insulate everyone 100%.”

Another parent, who declined to give her name, expressed a level of anger common among protesters.

“Every profession has gone back except teachers,” she said. “My husband, who’s a dentist, has been working in people’s mouths, helping patients. He’s put his life and our lives on the line to protect patients. But the teachers aren’t willing to go back to protect our children’s well-being, their mental health, their physical health. They’re deteriorating before our eyes, their lack of energy, their lack of wanting to go out, their depression. We’re losing our children because UTLA has demands.”

Some parents at the protest talked of an extended Zoom blackout, refusing to let their kids log in to class.

L.A. Unified announced one incremental step Monday. In his weekly broadcast, Beutner said schools will resume some in-person services next week for students with special needs such as English learners and students with disabilities. The effort will include one-on-one tutoring and small-group instruction. There also will be a resumption of physical conditioning for student athletes, he said.

The district has been among the last in the region to maintain a hard shutdown that halted all in-person services in early December. Even before that, in-person services and instruction were reaching fewer than 1% of the 465,000 students in kindergarten through 12th grade.

After a week of tearful, Zoom-propelled meltdowns, Rojas moved her 5-year-old to a private kindergarten offering an in-person program. But there’s been no escape for her third-grade son.

“My son has always had awesome teachers, but it’s not working,” she said. “We want the option to go back.”