Embattled EPA chief’s job may be in jeopardy

The onetime favorite of the president is increasingly battered by questions about his ethics and spending. 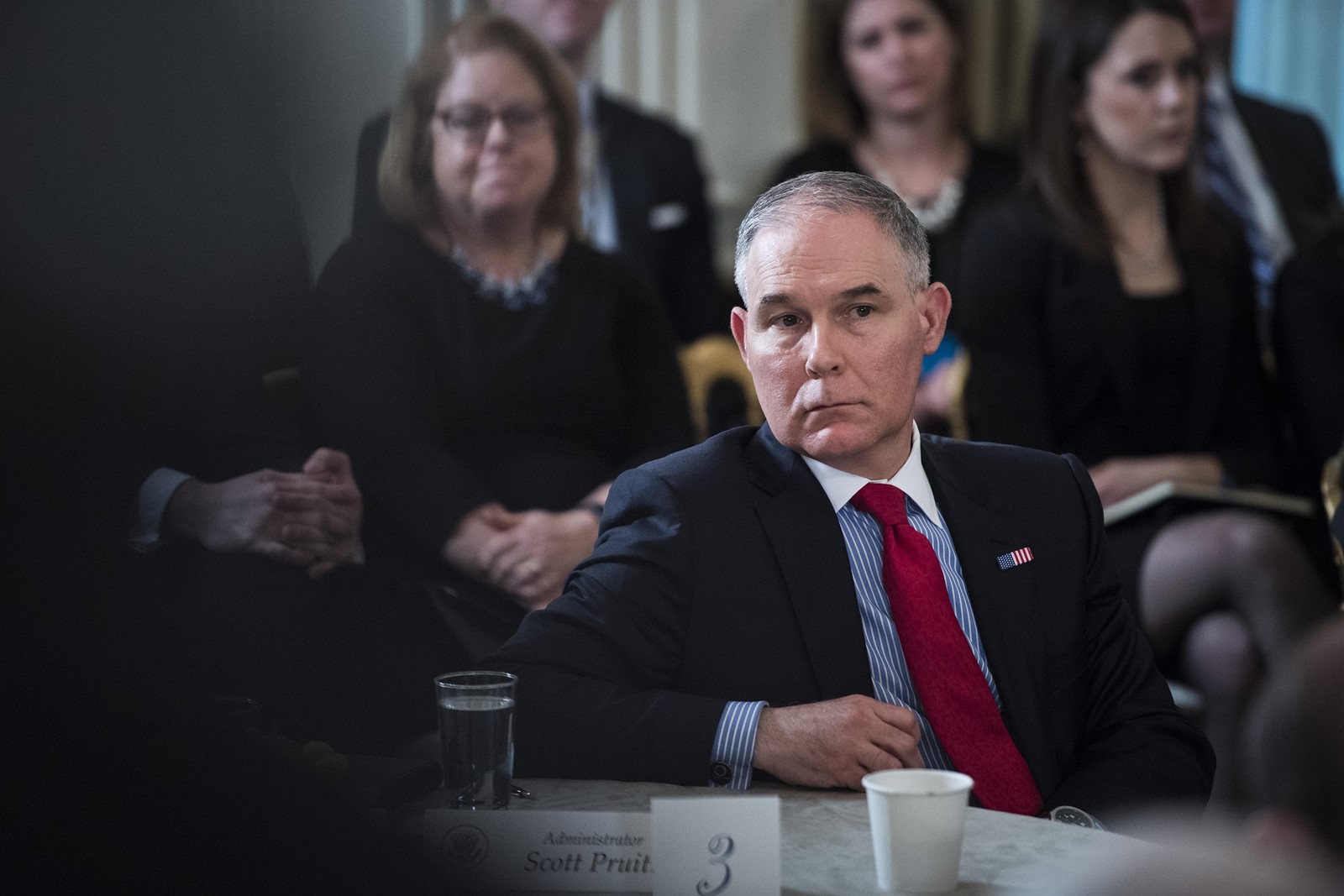 By midweek, even Pruitt looked rattled by how fast things were unraveling as he struggled to explain on national television how two aides he recruited from his home state of Oklahoma came to receive immense pay hikes — one of almost $57,000 — that the White House had refused to authorize. He bristled when asked how accepting a below-market room-rental from the wife of a Washington lobbyist whose firm does business before the EPA fit with President Trump’s vow to “drain the swamp.”

Worse of all, the on-air shaming came from the president’s favorite conservative cable channel, Fox News.

Pruitt has found little refuge at the White House. Asked Wednesday whether Trump was comfortable with the alleged ethics lapses swirling around Pruitt, White House Press Secretary Sarah Huckabee Sanders was unexpectedly frank. “The president’s not,” she said. “We’re reviewing the situation.”

On Thursday, the White House repeated its concern. “We expect that administrator Pruitt [will] answer those questions,” said Deputy Press Secretary Hogan Gidley.

But Pruitt, who denies any ethical lapses or abuse of taxpayer money, may yet hang onto his job at the EPA. As Trump boarded Air Force One Thursday, he was asked if he had confidence in Pruitt: “I do,” he said.

Later Trump told reporters he would “look at” the reports about Pruitt and “make that determination.” But he added, “I think he’s done a fantastic job. I think he’s done an incredible job. He’s been very courageous. It hasn’t been easy.”

Still, Pruitt’s abrupt transformation into the black sheep of the Cabinet has Washington abuzz. Buffered by the adoration that oil and coal industries heap upon him as he dismantles Obama-era environmental policies, he had avoided the turbulence and turnover gripping Trump’s inner circle. His supporters had once even floated his name as a possible attorney general replacement.

An unapologetic skeptic of climate change, Pruitt takes an approach that’s unnuanced and unyielding. The myriad actions he launched against clean air and water rules, and limits on greenhouse gas emissions — such as this week’s attack on the fuel economy standards championed by California — have won him approval from conservatives. Even if the courts ultimately block most of his rollbacks, as environmentalists predict, the legal frenzy and protests that Pruitt’s actions have created in liberal states delight Trump allies.

Some of those allies are rushing to Pruitt’s defense as he confronts charges that he abused his office and showed poor ethical judgment. But even before the controversies over pay hikes and housing deals, White House confidence in Pruitt was eroded by headlines about Pruitt’s penchant for flying first-class at taxpayer expense. He insisted security concerns mandated first-class tickets, but vowed to scale it back in the future.

Pruitt’s luxury plane travel, demands for a large personal security detail and other spending at the agency triggered alarms for some of the EPA staffers who managed such things. Several of them, according to the New York Times, were reassigned or demoted when they brought their concerns to Pruitt. The head of Pruitt’s security detail was reportedly reassigned soon after refusing Pruitt’s request to use a government vehicle’s sirens and flashing lights to cut through Washington traffic during a nonemergency trip. EPA officials said Pruitt had no role in when sirens were used.

Pruitt says the cascade of allegations about his ethics is part of a conspiracy against him and the Trump policy agenda. The former Oklahoma attorney general is confronting it the way he has confronted most every issue during his short tenure in Washington: by avoiding the mainstream media and taking his story to conservative outlets like Fox and the Washington Examiner. As those calling for his resignation grew midweek to include two House Republicans, Pruitt told the Examiner it was all much ado about nothing.

“It’s toxic here,” he said of Washington. “There are people that have long in this town done business a different way and this agency has been the poster child of it,” Pruitt said. “And so, do I think that because we are leading on this agenda that there are some who want to keep that from happening? Absolutely. And do I think that they will resort to anything to achieve that? Yes.”

The drama around Pruitt is reviving another storyline the White House hoped to move past. The trade publication Inside EPA reported Thursday that a key source of the damaging information circulated about Pruitt is former White House staffer Rob Porter, who resigned amid allegations he had been physically abusive with women, including two ex-wives.

The report cites anonymous sources. Porter has not commented. But one of Pruitt’s top confidants is an ex-girlfriend of Porter’s who told the White House about his alleged history of violence against women. That Pruitt aide, policy advisor Samantha Dravis, resigned from the EPA last week.

Just before she left the agency, Sen. Thomas R. Carper (D-Del.) had begun raising questions about Dravis’ work history. Last week, he asked the EPA’s inspector general to investigate reports that Dravis was absent from work for much or all of November, December and January.

Pruitt and the EPA did not respond to requests for comment from The Times.

Whether the White House will have his back for long is far from certain. Top officials there are making known their frustration that Pruitt’s controversies are undermining the president’s promise to root out corruption in Washington.

If the EPA chief hangs on, it may be because Trump can’t afford to add yet more turmoil to a Cabinet already filled with it.

He abruptly dismissed his secretary of State and his Veterans Affairs chief over Twitter in recent weeks. And since Trump’s appointment of CIA Director Mike Pompeo to the secretary of State job leaves the CIA post to be filled, that means three Senate confirmation battles are looming as the Republican-led Congress tries to hang on to power in this year’s midterm elections. A contentious fight over EPA leadership would create more problems for the party.

There were already three open EPA inspector general investigations into Pruitt before this week, involving his first-class travel, his hiring practices and his installation of a $43,000 phone booth in his office to deter eavesdroppers. And the inspector general is now considering the launch of a fourth investigation, this one into the deal he negotiated for a condo owned by the wife of Washington lobbyist J. Steven Hart, whose practice incudes energy and transportation issues.

Under the arrangement, first reported by ABC News and Bloomberg, Pruitt spent $50 a night to lease a bedroom in the Capitol Hill unit for the first half of 2017. Pruitt paid only for the nights he stayed.

But most people wanting to stay a block from the Capitol for $50 a night are more likely to end up on a couch. Pruitt said the EPA ethics office was OK with the arrangement. But the office issued a clarification saying it was only OK with the facts it was informed of. It did not consider, for example, the propriety of the landlord also providing housing for no extra charge to Pruitt’s daughter, who reportedly stayed in the unit while interning in Washington.

While many Republicans defend Pruitt, some say it has all become too much.

“Major policy differences aside, @EPAScottPruitt‘s corruption scandals are an embarrassment to the administration, and his conduct is grossly disrespectful to American taxpayers,” tweeted Rep. Carlos Curbelo (R-Fla.). “It’s time for him to resign or for @POTUS to dismiss him.”

Pruitt, meanwhile, has some explaining to do to the White House about how two of his confidants came to get giant pay raises against its instructions. After getting turned down by the White House, the EPA granted the raises by invoking a provision of the Safe Drinking Water Act that allowed Pruitt to make up to 30 hires without White House or congressional approval. The salary of one of the aides was boosted to $164,200 from $107,435. The other saw their salary go to $114,590 from $86,460.

Soon after the Atlantic broke the story Tuesday, Pruitt rescinded the raises. He said he had no idea they had been given and that it was not appropriate.