A taste of Iraq’s heyday

With fire, some seasoning and nostalgia, the lowly carp proves it’s worthy of nation’s seafood throne 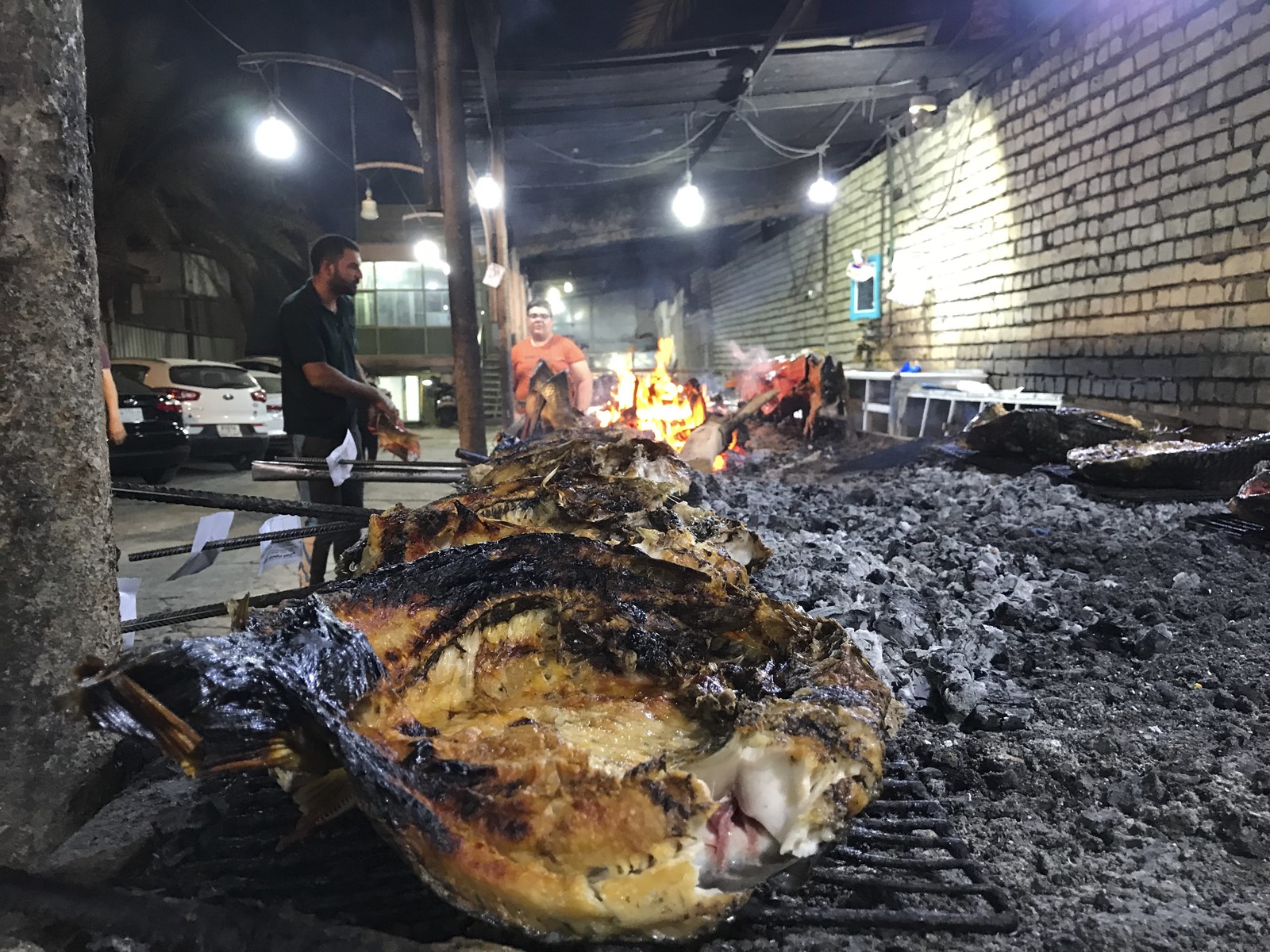 tanding by a small concrete pool, chef Mohammad Qassem thrusts his hand into the murky water. Out comes a sizable carp, 6 pounds or so. As the fish thrashes, he grabs a club. He thwacks once. He thwacks twice. Then he puts the carp — its wriggling stayed by the blows — on a scale.

The fish is stunned, but Qassem still moves with brutal efficiency: He plunges a knife into the center of its head, dragging the blade along the spine before splaying the fish open with a sharp crack. He scoops the innards out, sluices the now disc-like fish with water and applies generous heaps of rock salt. He turns to impale the fish on two stakes driven astride a fierce wood fire; the carp’s flesh turns pearly before the open flame.

Here in the Qreeiat district of Baghdad, it takes less than a minute to set in motion the violent alchemy that yields masgouf, the dish that transforms the oft-sidelined carp into the undisputed occupant of Iraq’s seafood throne.

Old-timers in Baghdad still wax poetic about the taste of wild carp caught fresh from the rivers. It hasn’t been advisable to eat what comes out of those waters since 2003: For a while, they were the prime dumping ground for the victims of Iraq’s horrific sectarian bloodletting. And carp are bottom feeders. Muslim clerics issued a banning the consumption of such carp.

But with the end of the war, the lowly carp is abundant on the market again. Today the majority of masgouf-destined fish are bred in pools dotting the Iraqi countryside — the farms of a new generation of entrepreneurs eager to cash in on the hunger for masgouf.

This common fish is a dirty grayish brown, not unlike the freshwater in which it forages; its skin slimy to the touch; its face framed by feline whiskers — if looks were a good predictor of taste, you’d swipe left.

But where most cuisines relegate carp to second-class status, in Iraq, and especially in the capital, Baghdad, it’s the heart of the country’s de facto national dish.

Yet it makes perfect sense on second thought, for the carp uniquely benefits from the Iraqi kitchen’s less-than-subtle approach to its ingredients. And it has been part of that cuisine, researchers say, for more than 4,500 years: A joint Italian-Iraqi archaeological mission found a plate near the ancient ruins of Ur in southern Iraq with what experts said were the remains of a masgouf meal.

That comes as little surprise to Nawal Nasrallah, a onetime English professor at Mosul University and author of “Delights from the Garden of Eden: A Cookbook and a History of the Iraqi Cuisine.”

Masgouf, she says, doesn’t require any special cooking utensils: All you really need is a knife, twigs and fire. People would sit on the shores of Iraq’s two rivers, the Tigris and the Euphrates, get their fish right there and eat it.

“It was a sort of picnic food,” she says.

Whatever its origins, it’s clear it dazzled both Iraqis and Iraq’s visitors over the millenniums. Sumerian texts, Nasrallah says, mention cooking methods similar to that of masgouf; the author Agatha Christie was said to have declared the dish “an adventure.”

Saddam Hussein’s craving for masgouf — it was his favorite meal — provided the vital clue needed for U.S. Army interrogators to track down the dictator-in-hiding to a foxhole near the city of Tikrit.

That obsession continues today. For many, it inspires a nostalgia for their country in its heyday, when it was counted a land of endless bounty and its capital a lodestar in the region.

On any day of the week — but especially Wednesday and Friday — Baghdadis flock to roadside vendors who sell carp out of truck beds.

For the discerning, not just any fish will do: Iraqis revere shabbout and bunni, varieties of carp and the carp-like barbel that make particularly delectable masgouf.

Those heading home will carry it in a sack filled with water to keep it alive till the last possible moment. The social-minded head to restaurants in Qreiaat or along Abu Nuwas street for a fish dinner overlooking the Tigris.

Most of the fish today come from fish farms, fed by man-made canals extending from the Tigris.

Ali Shukur, a 47-year-old breeder with 12 years of experience, fills a pool twice a year with carp fingerlings, and sells a portion of his fish to breeders while keeping others to fatten up and sell in bulk to traders.

It’s all part of an industry that produces an annual 32,000 tons of carp, according to a 2017 report from the United Nations’ Food and Agriculture Organization.

Shukur had once worked at the Interior Ministry, but the U.S.-led invasion in 2003 meant that job was no longer available. Employment prospects seemed dim as daily violence convulsed Iraq.

He returned to his father’s farm outside Baghdad and saw an opportunity: It was close to the Tigris, and with a relatively small outlay he could — and did — make money.

Some of that carp inevitably ends up with Sinan Duhaimi, who holds sway over an alleyway in one of Baghdad’s dedicated fish markets, located down a grungy road in the Zayouna neighborhood.

Duhaimi, known as Abu Naim, has the air of a mob boss, almost menacing as he stomps in his off-white galoshes and rubber overalls. He orders workers into pools to scoop up carp into plastic crates and hand them off to be weighed.

He kicks off an auction for the per-kilo price. Once a winning bid comes, the workers tip their crates’ contents into water-filled heavy-duty plastic sacks and then follow customers to their car, motorcycle cart, tuk-tuk or tanker truck.

Abu Naim’s frown and the volume of his shouts are directly proportional to how far the price creeps below the $1.36 a pound for which he bought the day’s haul. After all, carp is big business here: So important is the industry that when an epidemic killed millions of the fish, it became a national security issue.

The masgouf trade was even more lucrative during the war. Sectarian tensions meant Sunni Muslim traders wouldn’t enter Shiite-dominated areas; vast supplies of fish from Iraq’s western regions were effectively out of bounds, driving the price up.

Preparing masgouf may not take long, but it needs about an hour to cook.

Because it’s standing vertically and at a distance from the flame, (its name literally means “roof,” even though the fish is beside, not above, the fire), the roasting is lackadaisical, with the fat draining away while retaining much of the juiciness inside.

When it’s almost done, the skin is blackened on the coals for a finishing touch.

Purists will tell you only certain wood (“Citrus, apple, the hardwood,” intones Qassem) can be used for cooking masgouf. Some avoid any marinade other than rock salt.

Yet there is perhaps an illicit joy in chef Saleh Ubaidi’s version: He eschews wood and puts the fish on coals. He employs his own special sauce as marinade. (What’s in the sauce is — of course — a secret. Suffice it to say it’s citrusy and sweet, with hints of vinegar, turmeric and tamarind.)

Here in his tiny restaurant in the Ghadeer district, this former national team basketball player whirls oval-shaped grills of masgouf with the skill he must have shown as a ballplayer. In his other hand is his sauce-saturated brush.

He slathers the meat with the sauce, flipping it again over the coals to roast the rivulets directly into the flesh. Another flip and it’s plated on a bed of lemons, tomatoes and parsley with fresh bread on the side.

It’s hard to decide where to start. Some begin with the glistening chunks in the fish’s center, which only need a hard stare for them to slide off the bigger ribs.

Others remove the spine and tenderly scrape off shavings of sauce-entrusted skin from between the bones, or dig with their fingers at the singed edges; there they can excavate delicately roasted flesh redolent of the muddy waters whence the fish came.

The more adventurous may insist on the male carp’s testes. They’re chopped up and cooked separately in an aluminum foil pouch with a bevy of spices, tomato and onion. (Yes, they’re thought to be an aphrodisiac.)

Ultimately, it’s a game of patience, clearing a path through the more favored parts of the fish to an area just below the gills. There, the masgouf connoisseur can dig out “Luqmat Al-Sayaad,” the fisherman’s mouthful: a precious trove of silky, almost gelatinous meat of intense flavor.

Once finished, the remains look like a blast crater in a fish-skin platter; a few bones linger as reminders of the carnage.