In Long Beach, a better turn for the elegant terns

Conservation group is rescuing seabirds that settled on barges after colony was disrupted. 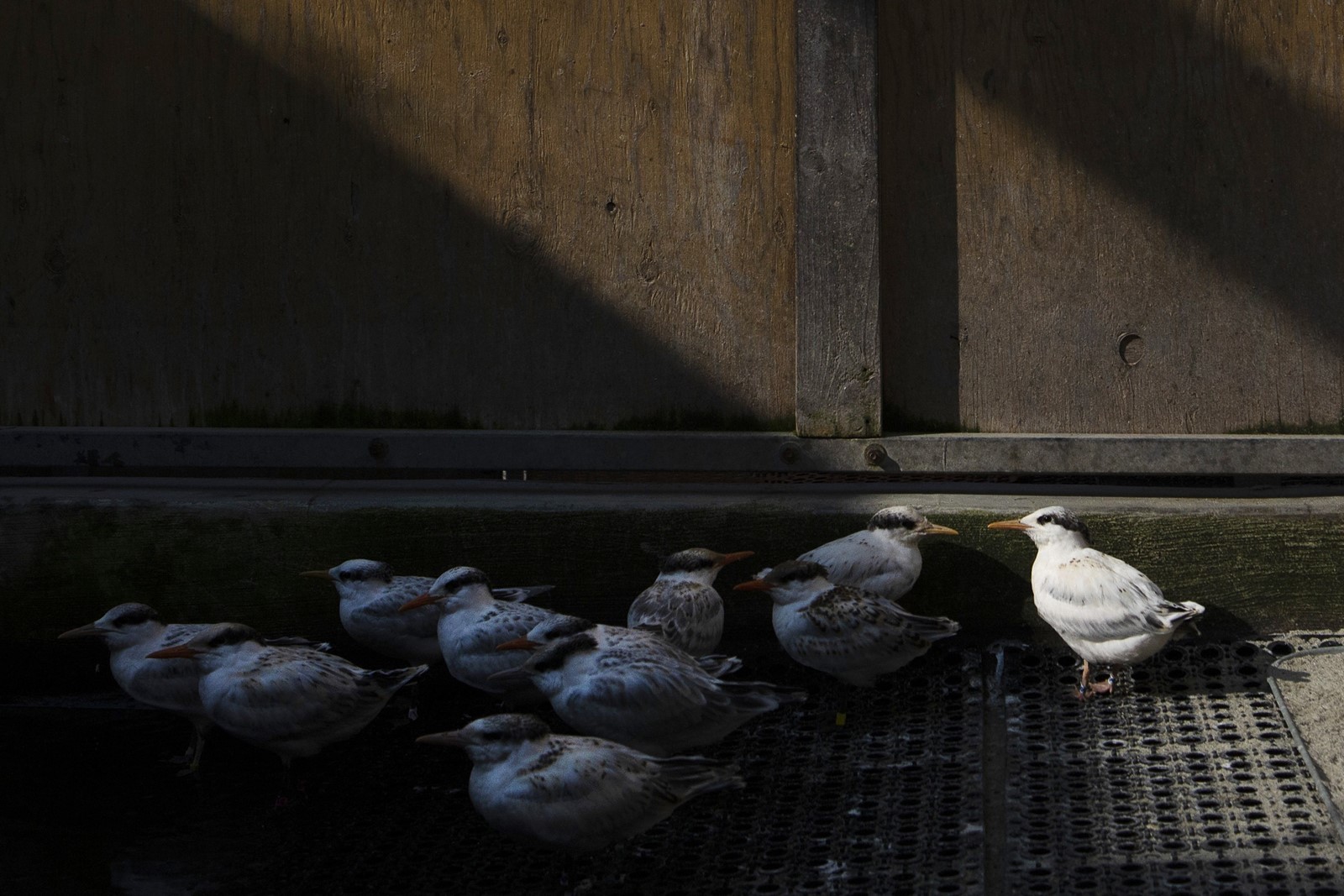 It’s been a tough year for elegant terns in Southern California.

A drone crash in June forced an estimated 3,000 of the sleek seabirds with their pointed orange bills to abandon their eggs at Bolsa Chica Ecological Reserve in Orange County. Experts say it’s possible that many of the birds set up camp on two commercial barges in nearby Long Beach Harbor.

Now, droves of the baby birds are falling into the ocean and drowning.

“They basically landed on the barge a day or so, and it may have been two or three days, after the incident involving the drones when they left Bolsa Chica,” said Tim Daly, spokesman for the California Department of Fish and Wildlife. “There’s really no way of proving or knowing, but we think there’s a possibility because they suddenly appeared.”

But now they’re stuck because the federal Migratory Bird Treaty Act prevents the company from moving and disrupting the birds.

Just after the Fourth of July holiday, dozens of dead baby terns washed up on the Long Beach shore. Loebl said she suspected fireworks scared some of the birds. The babies — too young to fly and unable to climb back onto the barges, which were sitting at least two feet above water — drowned.

“We haven’t really determined the full extent of what prompted them to stumble off the barge,” Curtis said. “They’re noticing the adults are probably in the water, flying around…. I think they’re just stumbling off the barge, and there’s a pretty big drop-off and they can’t get back on.”

A patchwork of agencies, conservation groups and volunteers has emerged to conduct emergency rescues.

Every morning for nearly two weeks, two boats sidle up to the terns’ new floating home. With their engines low, so as not to scare the birds, the boats circle the barges, searching for wayward baby terns.

The little ones are easy to spot, Bergeron said: Their wings, not quite waterproof yet, quickly sink in the water.

One of the smallest birds he encountered, named “Little Mike,” was very low in the water when rescue boats approached. The tern slipped underwater for about 20 seconds before rescuers recovered the animal and helped it breathe again.

“That bird was essentially resuscitated from death and is actually doing really great,” Bergeron said.

With a swoop of a net, the rescuers scoop the terns from the water and into the boat, where they are dried off, invigorated with hand warmers and taken to the Los Angeles Oiled Bird Care and Education Center in San Pedro. There, staffers feed the birds slivers of fish by hand — a tedious process that often takes several hours, Curtis said. “It’s a little bit like having a baby nursery where you just have to keep feeding.”

Staffers wear masks and face shields as they feed the terns, so they don’t get habituated to their caregivers. Once the babies fledge at 35 days, International Bird Rescue plans to release them back into the wild.

But what to do about the barges in the meantime — and after this generation of baby birds grows up — remains a challenge. The center is going through an extra 100 pounds of fish a day, Curtis said, and needs donations to continue to care for the rescued terns. Boaters are advised to steer clear of the barges, to avoid disturbing the birds.

Loebl said people are working on a temporary solution to create a ramp so that any birds that fall off the barge can climb aboard again. A trial raft attached to the barge on Thursday seemed to work, she said.

“The ultimate goal is a hands-off approach, which means if we can attach ramps or rafts to the barge to allow the birds to recover themselves, that would be great and ideal,” Loebl said.

This is not the first time terns have navigated to Long Beach Harbor to colonize. In 2006, baby tern carcasses washed ashore after the birds stampeded off two privately owned barges.

The tugboat operator, Ralph Botticelli, told The Times that he and his workers were attempting to move the barges when they accidentally spooked the birds.

The terns returned the following year, prompting environmentalists to again propose a more permanent solution: the creation of a human-made island.

“The reason we want to do that is these terns keep wanting to nest in the port,” Loebl said. “So if they’re trying to find habitat because their habitat is limited … these [are] open spaces for them to breathe.”