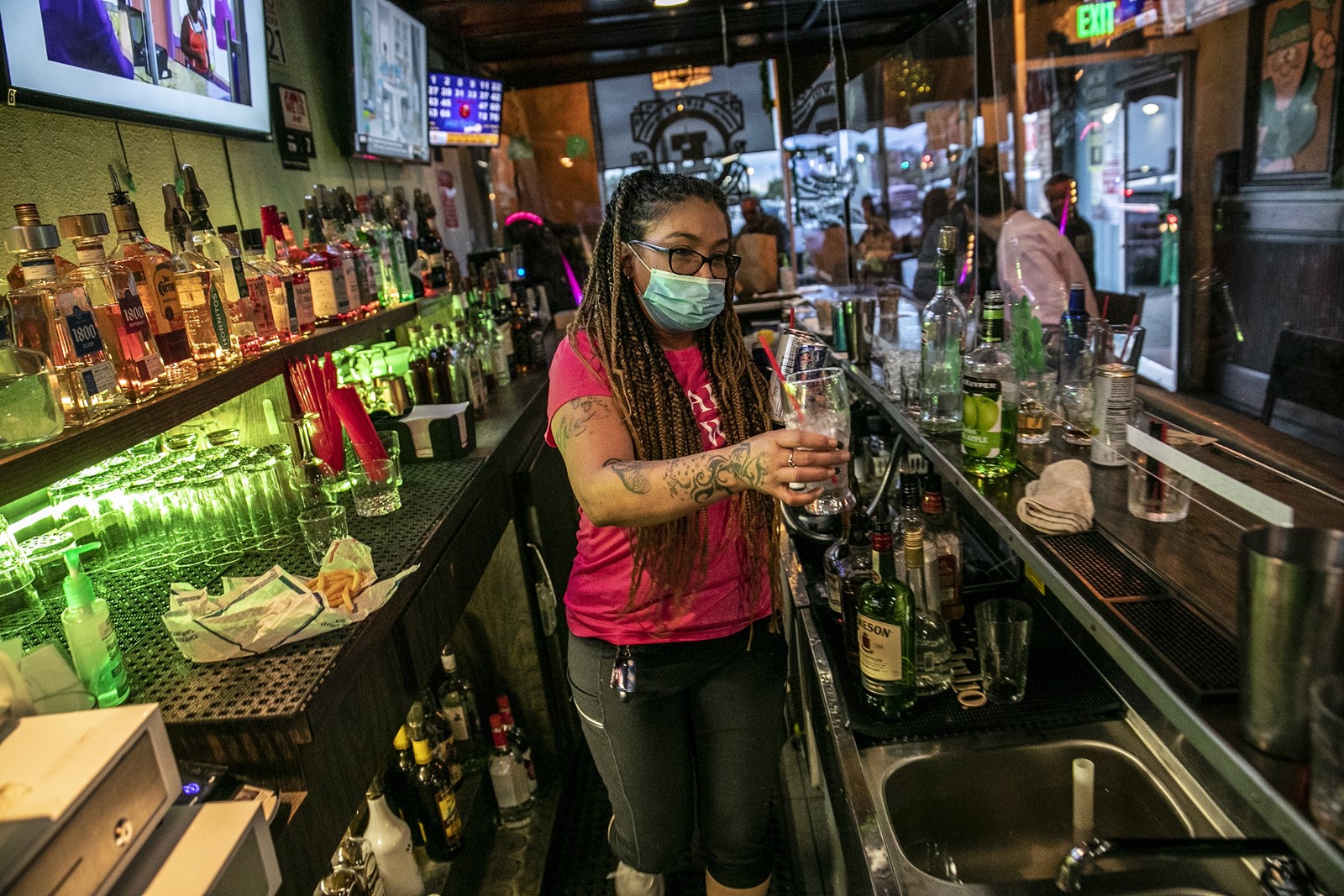 CHRISTINA FLINTLAND works behind plexiglass at Elvie’s Inn in Covina on Sunday. The bar will close Monday, albeit under protest. “We can’t keep shutting down businesses at a moment’s notice,” its owner said. (Robert Gauthier Los Angeles Times)
PREVIOUS IMAGE

Citing the rapid pace of coronavirus spread in some parts of California, Gov. Gavin Newsom ordered seven counties including Los Angeles on Sunday to immediately close any bars and nightspots that are open and recommended eight other counties take action on their own to close those businesses.

The order shuts down any bar, brewery or pub that sells alcoholic drinks without serving food at the same time. Those that sell food will either be subject to the stricter dine-in rules or asked to focus on takeout and patio service.

“COVID-19 is still circulating in California, and in some parts of the state, growing stronger,” Newsom said in a written statement. “That’s why it is critical we take this step to limit the spread of the virus in the counties that are seeing the biggest increases.”

Although bars were not open in four of the counties — Contra Costa, Santa Clara, San Joaquin and Imperial — at the time of the decision, the action cites local health data that those counties should keep the establishments closed, state officials said.

Los Angeles Mayor Eric Garcetti wrote in a tweet that he supported the governor’s order.

“As we started reopening more businesses, we cautioned that we may need to change course to protect public health from this deadly virus,” Garcetti wrote.

“We are actively monitoring COVID-19 across the state and working closely with counties where there are increased rates and concerning patterns of transmission,” Angell said in a written statement. “Closing bars in these counties is one of a number of targeted actions counties are implementing across our state to slow the virus’ spread and reduce risk.”

The decision was based, according to state public health officials, on data related to COVID-19 cases, hospitalization rates and what they describe as concerning patterns of transmission in those counties. State health guidelines for reopening bars were issued June 5, with the businesses allowed to reopen as early as June 18.

Sunday’s action, however, shows that some of the counties meeting the original standard have reported worsening conditions as the days went on.

Bars, state health officials said, often operate with larger crowds of people who remove masks more frequently to drink, and loud music may force customers to raise their voices — potentially spreading more airborne particles. Contact tracing, needed to determine whom an infected person has been around, is harder when it comes to these establishments given the constant mixing of customers.

In Covina, Elvie’s Inn was crowded and jumping Sunday night, but staff said the bar would shut down Monday, albeit under protest.

Angie Sharma-Weisberger, whose family owns the bar, said they reopened Elvie’s on the first day they were permitted to, installing plexiglass at the bars and tables and training their staff on protocols to reduce the risk of spreading the virus.

“They need to rethink this process going forward because COVID will obviously be part of our lives for the rest of the year,” she said. “We can’t keep shutting down businesses at a moment’s notice. This is already a difficult business to begin with.”

Sunset Beer in L.A.’s Echo Park had just reopened its bottle shop Friday to a limited number of customers. Its owners did not immediately open the bar, where patrons can lounge and sip craft brews for a corkage fee, saying in an Instagram post that they had hoped to work their “way to that point carefully and safely.”

After Newsom announced his order Sunday, Sunset Beer informed customers that the business would again cease in-person shopping and revert back to a web-based ordering and pickup system.

“Everybody has been so pleasant and understanding that it’s hard to believe that we are all still under quite a bit of stress due to all of this,“ the Instagram post said. “We remain optimistic for the future - it may be awhile before we can get back to normal but we hope everyone will work together and look out for each other so that we can get there SOON.”

Brett Rubin of Bar Henry had anticipated he might be whipsawed again by shifting guidance from the government in what has been a dispiriting time for small-business owners, he said.

“I want to give our local leaders the benefit of the doubt … but it feels like we are all grasping at straws,” he said.

The decision by Newsom stands in contrast to recent choices to leave more of the decision-making authority to local officials. The governor has said it is possible additional sectors of the state may need to scale back on reopenings, but he has been hesitant to make those decisions in Sacramento.

This month, the governor ordered all Californians to wear face coverings while in public or high-risk settings.

The alarm over the rising case numbers extends across California, where statewide cases topped 215,000 on Sunday. Hospitalizations and infection rates are also rising, and officials cite several likely factors including reopenings, private social gatherings and the recent protests over George Floyd’s killing in Minneapolis police custody.

On Friday, Newsom said he was recommending that Imperial County reinstate stricter stay-at-home orders, after it continued to report the highest per-capita case rate of any county in the state, as well as the highest rate of positive tests.

The Imperial County Board of Supervisors took no immediate action to direct businesses to shut down, but local officials met with a state delegation Saturday to decide how to proceed.

In San Bernardino County, officials said that many hospitals are getting closer to reaching “surge capacity” and that they are making plans to open alternate care sites for patients if hospitals fill up.

And Belmont Park, an amusement park in Mission Bay, was closed Friday afternoon by officials who said it was operating rides in violation of state guidelines. The shutdown came on the same day that officials announced San Diego County’s highest number of diagnosed COVID-19 cases in a single day.

Another day of big increases in Los Angeles County coronavirus cases and hospitalizations prompted health officials Saturday to warn that the county is entering a “critical moment” and that some of the easing of stay-at-home orders is in jeopardy unless the trend changes.

“If we can’t find it in us to follow these mandates, including wearing face coverings and distancing when around others, we jeopardize our ability to move forward on the recovery journey,” Barbara Ferrer, the county health director, said Saturday in a statement. “Our collective responsibility is to take immediate action, as individuals and businesses, to reverse the trends we are experiencing.”