Libraries remain vital despite pandemic — and because of it 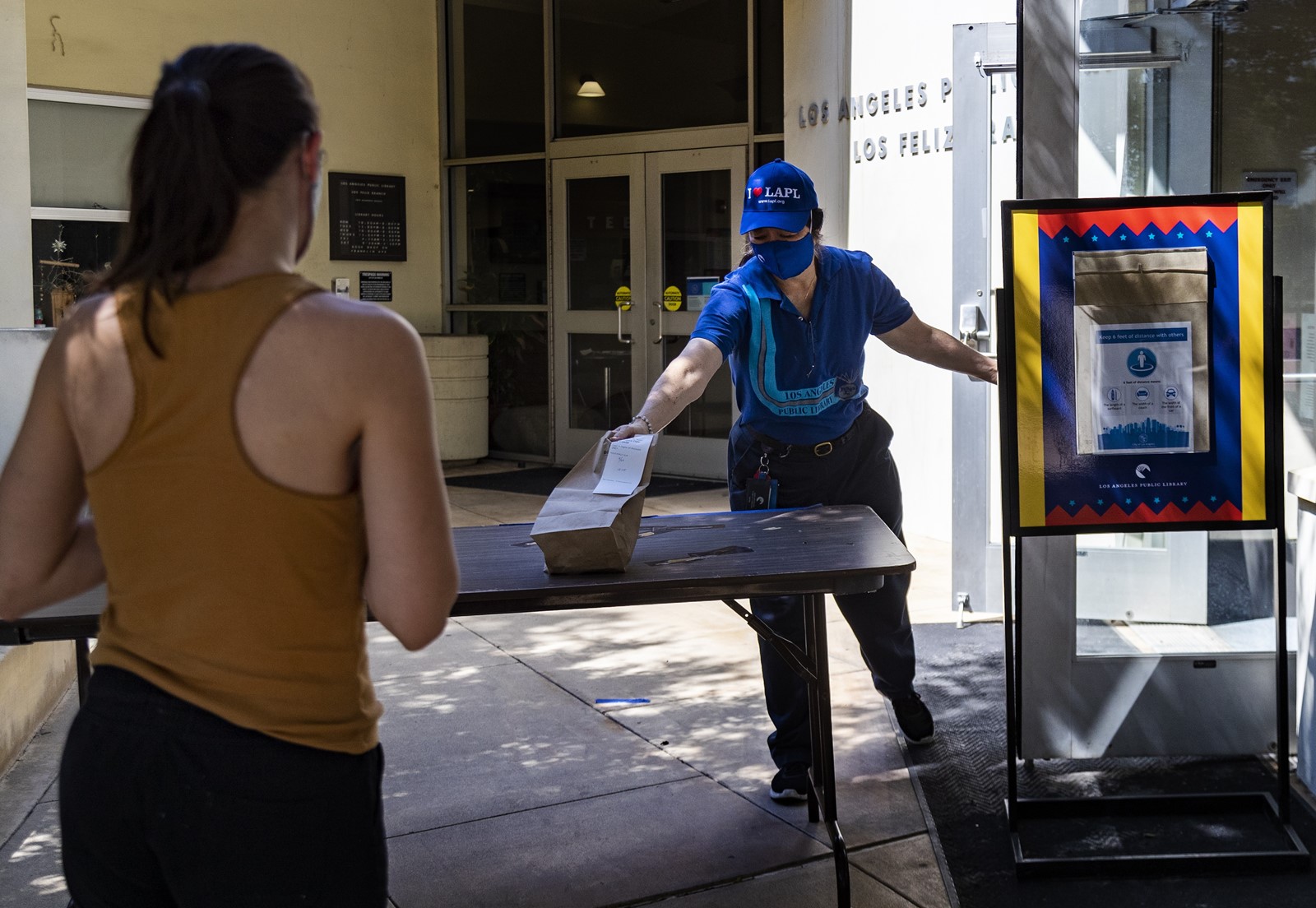 I’ve been library hopping this whole week long, exploring the rich offerings of the Los Angeles Public Library system. I’ve been to free classes and events hosted by the Central Library and quite a few of the 72 branches spread out across the breadth of our city.

Through the library, I’ve joined in a book club, a writing class and a career day. I’ve seen children read aloud to a dog. I’ve learned from a master gardener how to turn the pages my columns are printed on into pots for seedlings. I’ve heard people grapple with systemic racism in a learning circle focused on the New York Times’ “1619 Project.” I’ve watched volunteers helping people learn English explicate idioms: “dog-tired,” “cloud nine,” “kick my butt.”

I’ve paid my visits while all the library system’s buildings have remained COVID-closed to the public — a physical absence that has hit people hard.

But I’ve discovered through my tour that as many (real) doors have closed, other (virtual) ones have opened, greatly extending the library’s reach. I hope they’ll stay open even after the virus is vanquished.

If it weren’t for the digital divide — an enormous problem the library system is trying to do its small part to chip away at — and if it weren’t for how being in actual library buildings helps people, I’d have to say that our city’s public library system in this new time feels in some very profound ways warmer and more accessible than ever.

So many of us like to visit our libraries to browse the bookshelves, to see what’s just arrived, to go hear a well-known author speak. But for some in our city those buildings are an absolute lifeline — places for the isolated to find respectful, otherwise-absent human contact, for those without roofs over their heads to get respite from the outdoors as well as resources to help them and vital computer and internet access.

The virus has exposed much that is unfair in society — including that we don’t all have the technological resources the modern world all but requires.

At the same time, it has shone a light on just how extraordinary those resources can be if you do have them — how you can be alone anywhere in front of a screen and join a community as big as the world.

The library lists its ever-growing array of online classes and events on its homepage, and visitors from all over are partaking of them. A few programs are restricted to people in the area, but the vast majority are not. When a 6-year-old named Shreyovi joyfully half read, half sang “One Fish, Two Fish, Red Fish, Blue Fish” to a dog named Summer on Tuesday afternoon, Andy Howe, the Sun Valley branch children’s librarian, was running the weekly gathering from her home in Glendale. The little boy was at his dining room table near Portland, Ore., and Summer was lolling about on the grass in a backyard in Lake View Terrace.

Pre-pandemic, Summer would have come to the library for the weekly “BARK: Read to the Dogs” session. The neighborhood children who read to her loved to pet her and comb her hair, which they were collecting to make something with, Howe told me. But Shreyovi couldn’t have been part of it. And neither could 7-year-old Tallay, who Zoomed in from Palm Desert to read about Grover from “Sesame Street.”

It’s recently become possible to sit outside almost all the library system’s libraries to use the free Wi-Fi six days a week, from 10 a.m. to 8 p.m., though at first there were concerns that leaving it on might encourage people to congregate in ways that wouldn’t be safe.

It’s also possible now to go to an L.A. library to borrow materials, though you have to request them in advance and make an appointment to fetch them outside either the Central Library or one of the 19 branch libraries that offer the new pandemic-safe Library to Go service.

I spent several hours this week watching a steady stream of masked borrowers arrive in the parking lot of the Los Feliz branch to pick up what they’d reserved, delivered to them in brown paper bags. In the space of 10 minutes, I met two novelists who were missing the indoor writing space.

I also learned from veteran librarian Pearl Yonezawa, who has run the very busy branch for 25 years, how different the library’s world is right now. It’s not just the inability to stroll the aisles with a regular who wants to take out a book but doesn’t know what book.

It’s having to quarantine the books and videos that are returned before they’re handled, trying to reconfigure the space so it will be safe when the doors open again and managing with a much-reduced staff on site. One-third of her staff is at home because of high risk or child-care issues. Another one-third have been redeployed as city disaster service workers. The children’s librarian, Diane Garcia, a new mother, is mostly working these days as a contact tracer.

Garcia told me that, in normal times, she’s happily busy all day with kids inside the library. Before she began contact tracing, she told me, she used her emptier days to boost the branch’s social media pages, learn how to turn story times virtual and test out new ideas. In July, with funding from the Friends of the Los Feliz Library, she created a story walk for neighborhood kids, who could follow a map on a flier to read page after page of a picture book, displayed in the windows of local businesses.

Adult librarian Matthew Panzera told me about the oddness of transforming his popular monthly film screenings, which were mostly focused on the watching, into virtual ones in which people stream a movie on their own and come together not to watch it but to talk about it.

They and all the librarians I talked to this week told me that the pandemic has both tried them and fueled their creativity. Librarians from different branches have come together to host programs. Some have yet to meet in person.

That cross-pollination of staff, volunteers and visitors is one of the unexpected gifts of this new world born of necessity. People who would never have met before are now meeting, albeit online.

For city residents, it’s no longer a traffic nightmare to attend a library event or class miles away. That was part of what I loved about the “Grow Your Own Food: Fall/Winter Garden” program hosted by the John C. Fremont branch library on Wednesday afternoon. On Zoom, I could see master gardener Emi Carvell cut into a gorgeous purple sweet potato in her Venice front yard from my own home in Hollywood. (I could also watch one of the other people watching Carvell as she trimmed artichokes in her kitchen.)

Participating in many different library programs is so easy now, and not just on Zoom, I learned from managing librarians Kelly Tyler, who oversees the literacy classes, and Madeleine Ildefonso, who directs the New Americans Initiative. I talked to them last week when I was writing about Clemencia Isabel Morales, who prepared to become an American citizen through one of the initiative’s free citizenship classes.

Tyler’s purview includes the library’s Career Online High School, through which adults who live in or work for the city can earn a high school diploma and career certificate in a high-demand field. That program was already web-based, but the literacy programs and the initiative’s services for immigrants weren’t. Before the pandemic, students working on their English or citizenship met in person at libraries with volunteers, some in one-on-one sessions, some in group classes. Now they’re getting together in whatever ways work, including on the phone, on WhatsApp, on Facetime.

Some of my favorite moments this week were in the literacy classes. I heard so many different accents. I glimpsed so many different living rooms and bedrooms. I saw people standing outside to take the classes in breaks at work. I heard one woman promise to make her on-screen classmates Persian rice one day when they could actually meet in person. I felt freshly smitten with our many-splendored city.

I also kept seeing the same people in class after class. One was Hande Guzey of Istanbul, all alone in this big metropolis she moved to just two years ago. She’s out of work. Her substitute teaching jobs dried up when the virus hit. She’s trying to take advantage of her unasked-for free time. She used to take one weekly conversation class at the Fairfax branch. Now, she takes hour after hour of classes, taught by people from all over the city.

In one class, I asked in the chat room how students were enjoying the virtual library.

“Hi Nita, Zoom classes took away our loneliness,” Guzey wrote. Like me, she said, she hopes they’ll stick around even after we once again have other choices.