In the president’s TV ad campaign, the pandemic is the elephant in the room. 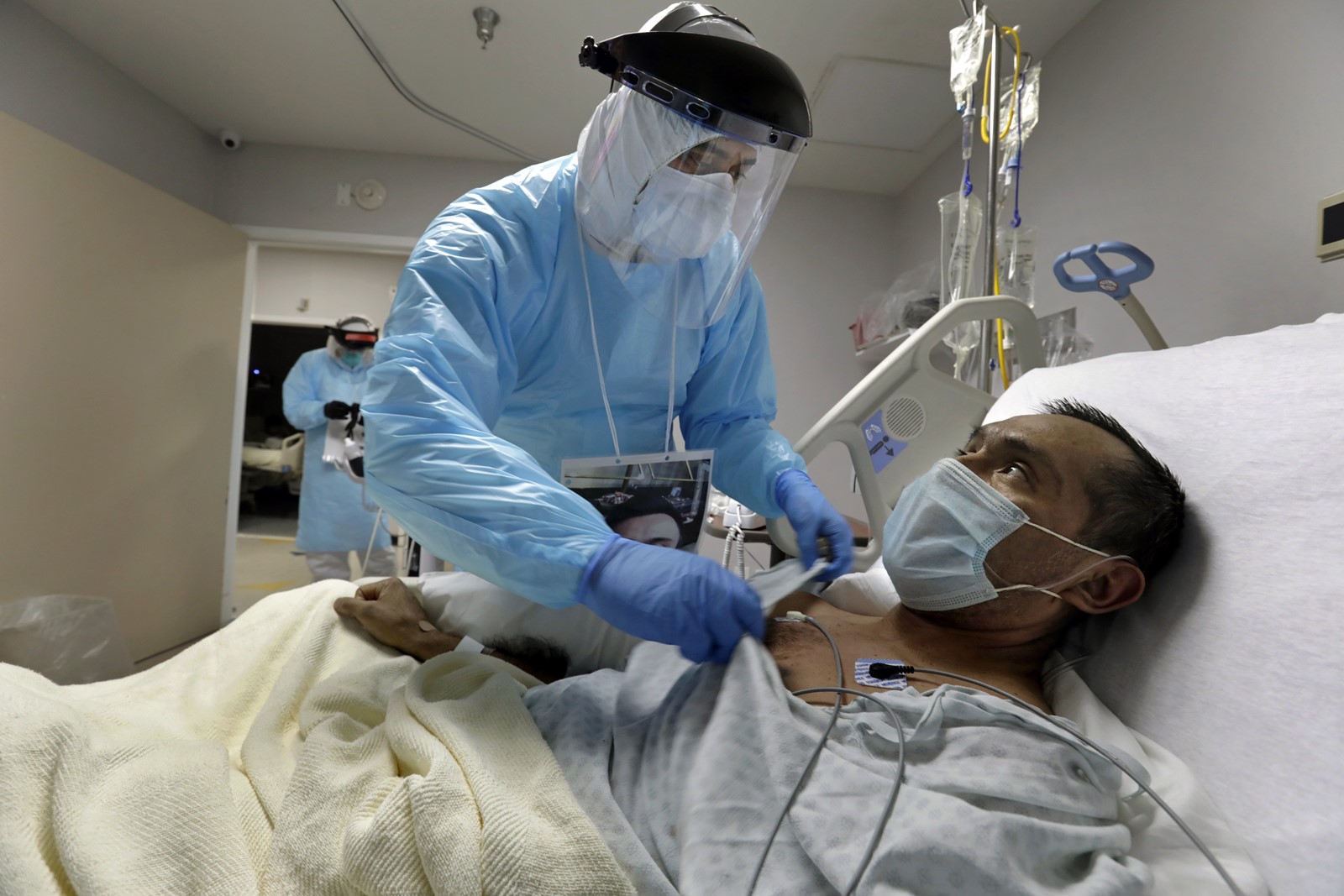 COVID-19 PATIENT Melquiades Cervantes is treated in a Houston hospital. The surge of deaths and hospitalizations in Texas is jeopardizing President Trump’s standing in the state, said one political scientist. (Carolyn Cole Los Angeles Times) 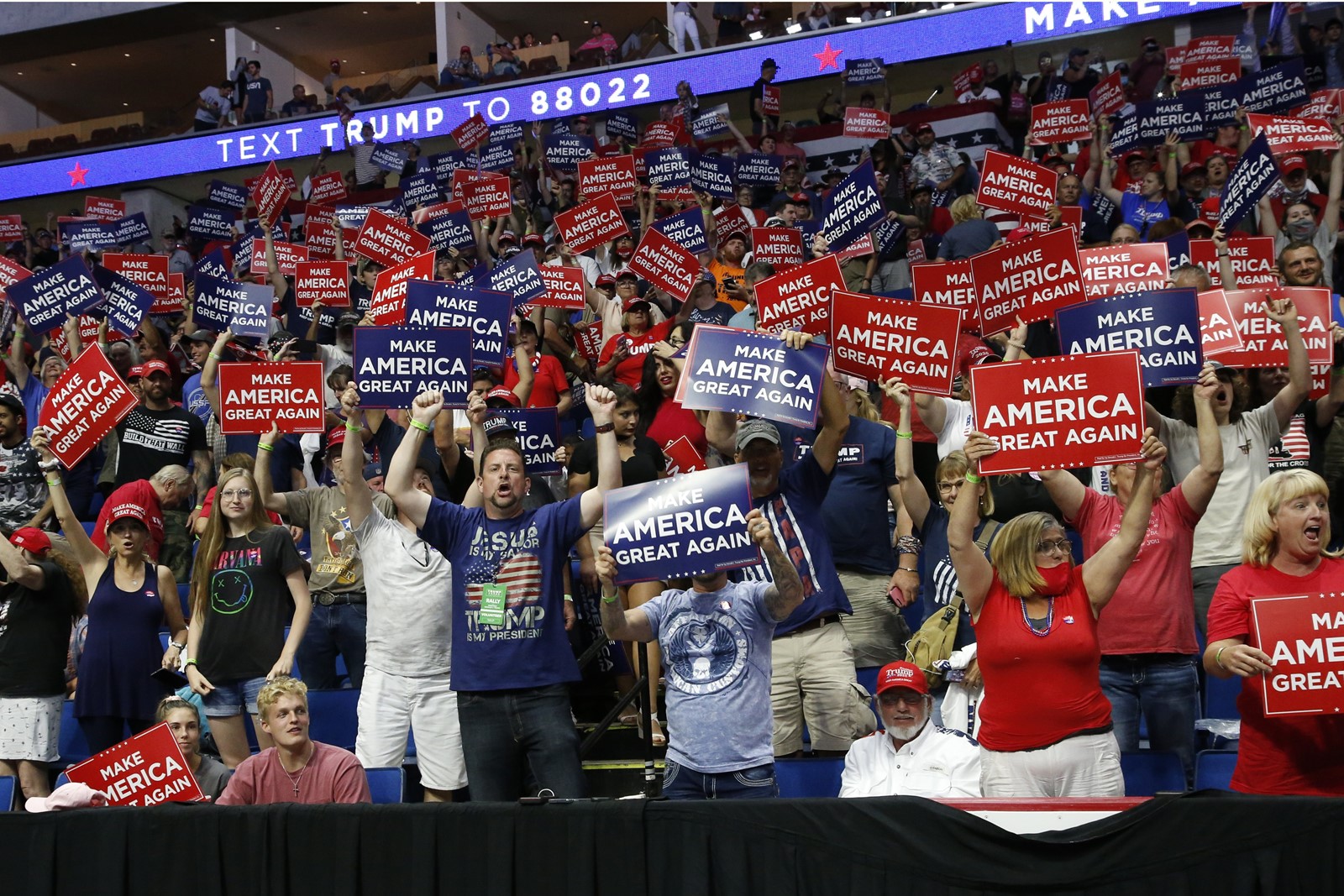 The death toll keeps rising as COVID-19 rages across Florida, Arizona and other campaign battlegrounds, but the television ads President Trump is airing in those states say nothing about the pandemic that has upended life for all Americans.

Nearly every day, states that could decide the Nov. 3 election break new records of sickness and death. Nationwide, the virus has killed nearly 141,000 people. Yet the $30 million in TV ads that Trump has run so far this month in his bid for a second term dodge the subject of how he is steering the country through one of the worst calamities any modern president has faced.

Instead, Trump’s ads falsely accuse his Democratic rival Joe Biden of trying to defund police. They claim the former vice president would endanger children by letting violent crime explode in cities overrun by protesters who vandalize stores and set buildings on fire. They suggest that Biden — a moderate U.S. senator for 36 years — would bow to “the radical left-wing mob.”

It’s not unusual for an incumbent in trouble to try to divert attention from tough times or define an opponent in negative terms, said Erika Franklin Fowler, co-director of the Wesleyan Media Project, which tracks political ads. But the epic scale of the pandemic’s damage to the nation makes it all but impossible to avoid, she said.

“It just becomes stranger and stranger that he doesn’t find a way to talk about what he’s doing about it,” she said.

Trump’s exclusion of the coronavirus from his advertising comes as polls show that most Americans disapprove of his response to the pandemic. For months, Trump has played down the health threat while stoking racism with incendiary remarks over Confederate monuments and Black Lives Matter protests.

Historian David M. Kennedy sees parallels to President Herbert Hoover’sstruggles when he ran for reelection in 1932 after the Great Depression erupted on his watch, opening the way for Franklin D. Roosevelt to unseat him.

“You don’t want to call attention to all of the egg that’s all over your face,” said Kennedy, the author of “Freedom From Fear: The American People in Depression and War, 1929-1945.”

“The examples of other countries that have more successfully dealt with this matter tell us that a different kind of leadership could have done better, and historians will try to figure out why Trump has proven so inept in the face of this particular crisis.”

In May and early June, Trump ran TV ads saying he’d taken fast action on vaccines, treatments and tests and “saved countless lives” by banning travelers from China and Europe. In the six weeks since he stopped running them, the U.S. has reported 32,000 more deaths from COVID-19 and 1.9 million new cases, even as many other hard-hit countries have tamed the spread of the coronavirus and reopened safely.

The importance of TV commercials in presidential races has diminished as social media have emerged as a main source of voter information. But campaigns still spend heavily on TV spots, and advertising patterns remain one of the best public gauges of strategy.

For the first three weeks of July, Trump spent $19 million to advertise in states he won narrowly in 2016: Florida, Arizona, North Carolina, Pennsylvania, Wisconsin and Michigan, according to Advertising Analytics, an ad tracking firm.

Nearly all of the $13 million Biden spent on TV ads for the same period went to those same six states.

The president’s campaign has also poured $5 million into Georgia, Ohio and Iowa, states he carried by a wider margin in 2016 but now appear to be within Biden’s reach.

The recent surge of COVID-19 deaths and hospitalizations in Florida, Arizona, Georgia and Texas is jeopardizing Trump’s standing in those states, said Alan Abramowitz, a political scientist at Emory University in Atlanta.

“It’s helping to put those states in play, I think, because of the lack of confidence in his leadership on that issue,” he said, “and he isn’t saying or doing anything right now that would change that perception.”

In Florida, more than 5,000 people have died, more than 360,000 have been infected, and hospitals — like those in several other states — are packed with critically ill patients.

In Arizona, where Phoenix morgues are nearly full, coroners are deploying refrigerated trucks to store bodies. The state’s positive test rate for the coronavirus — nearly 1 in 4 — is the highest in the nation.

Florida, Arizona, Georgia and Texas are run by Republican governors who — at Trump’s behest — delayed shutting down businesses, were quick to reopen, then were forced to retreat as the contagion exploded.

Trump, who had planned to run for reelection on a strong economy, has pressured states to reopen in defiance of public health guidelines. A Fox News poll released Sunday found that voters no longer see Trump as stronger than Biden on the economy.

Declining voter confidence in Trump has driven the president’s poll ratings downward. A staggering 69% of Americans say the country is on the wrong track, and 56% disapprove of Trump’s job performance, according to RealClear Politics aggregates of public polls.

A Washington Post/ABC News survey last week found that 60% of voters disapproved of Trump’s leadership on the pandemic. Multiple polls have shown a drop in his support among a key constituency that favored him in 2016: people older than 65, a group highly vulnerable to COVID-19.

Beyond his ads showing mayhem in the streets under Biden, Trump has also run spots blaming his opponent for the loss of U.S. factory jobs to China.

Another Trump ad suggests that Biden, 77, is going senile. It describes him as “clearly diminished” and shows him stumbling to find his words. “Joe Biden does not have the strength, the stamina and mental fortitude required to lead this country,” a narrator says.

That line of attack risks backfiring on the 74-year-old president, said Susan MacManus, a veteran political scientist at the University of South Florida.

“Trump has got to be careful,” she said. “Trump is thinking that everybody thinks he’s energetic and vivacious and doesn’t have these cognitive problems. But is that true?”

A recent Monmouth University poll found that 52% of voters were confident that Biden has the mental and physical stamina to be president, compared with 45% for Trump. The president at times has difficulty pronouncing words and recently used two hands to raise a glass of water to his lips. His slow gait walking down a ramp at a West Point graduation last month led critics to question his health. Trump blamed slippery shoes.

Trump campaign spokesman Tim Murtaugh said Americans already understand how hard the president has worked to keep the country safe during the pandemic but need to know more about Biden, so it makes sense to stick with the scorching ads.

For his part, Biden has run spots that depict him as a force for stability after the turmoil of Trump’s racially divisive presidency. The country is crying out for “leadership that brings us together,” he says in one spot featuring images of himself and American workers wearing masks. Trump, who has mocked Biden for campaigning in a mask, has worn one publicly only once.

Priorities USA Action, a super PAC running ads on Biden’s behalf, has been airing spots hammering Trump for letting the pandemic spiral out of control. Guy Cecil, the group’s chairman, said it was no surprise that Trump is avoiding the topic in his ads.

“I think it’s going to be very hard to make this election about anything other than the Trump administration’s failure to deal with the coronavirus,” he said.

Abramowitz, the political scientist, believes that many voters are disturbed by Trump’s dismissiveness toward public health experts, his rush to reopen schools and businesses and his rallies of crowds sitting shoulder-to-shoulder without masks.

“Everything I see him saying or doing is just reinforcing this perception that he’s not capable of dealing with this,” he said. “And it’s obviously the most significant challenge facing the country right now.”