As the leaders prepare for a second summit, experts hope to see results, not theatrics. 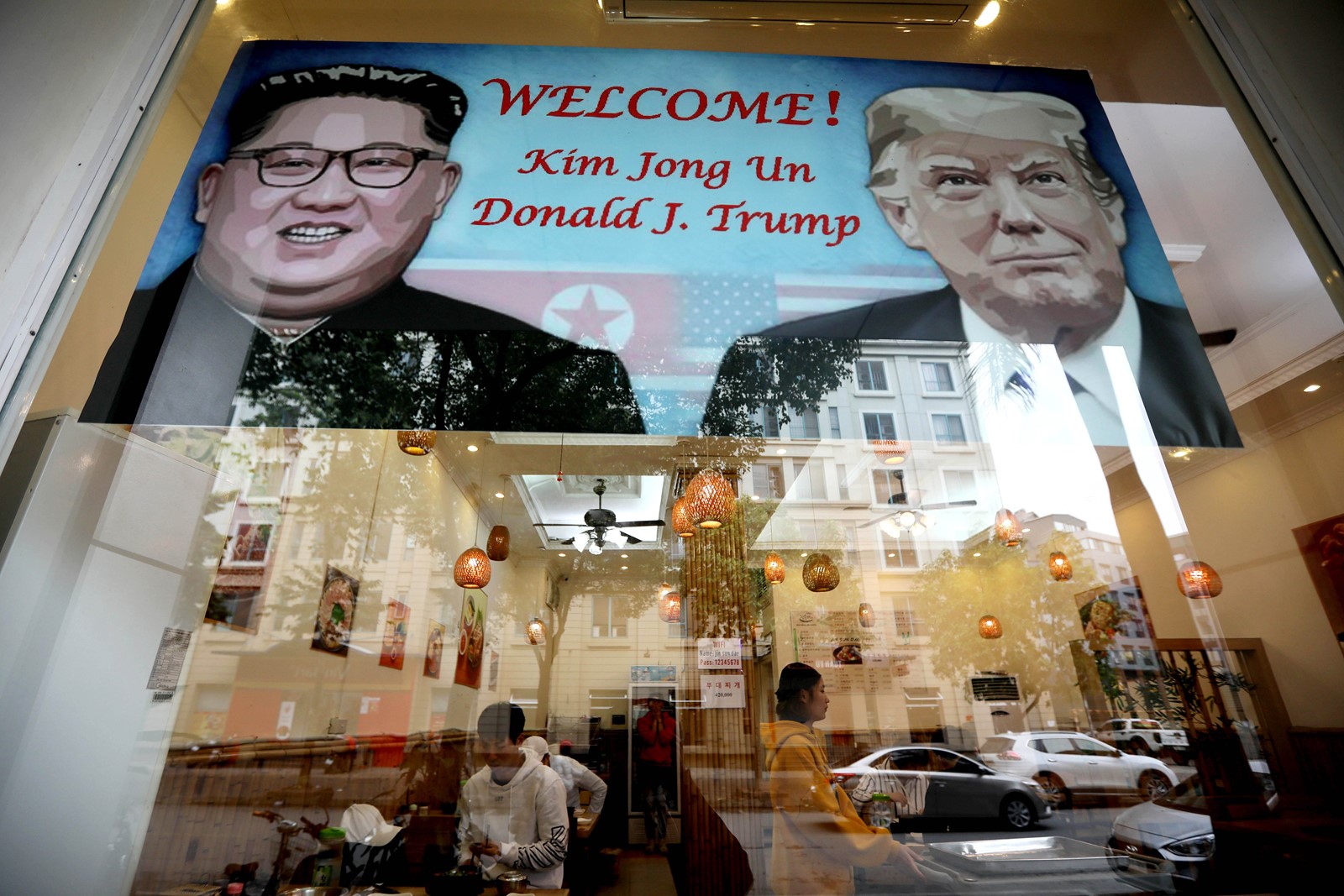 A POSTER heralding the second summit between the U.S. and North Korea dominates a restaurant in Hanoi. (Luong Thai Linh EPA/Shutterstock)
PREVIOUS IMAGE

In the eight months since President Trump and Kim Jong Un held a one-day summit in Singapore, North Korea has taken small, strategic steps aimed at demonstrating a willingness to partly denuclearize, but the progress has barely reached an embryonic stage.

As the two leaders prepare for their second summit Thursday in Hanoi, Vietnam’s capital, diplomats and disarmament experts hope to see concrete results rather than the theatrics and vague promises of the June 12 meeting.

Although tensions have eased dramatically, negotiations since Singapore have produced little more than agreement for another summit while North Korea has continued developing its nuclear arsenal and ballistic missiles, according to U.S. intelligence officials and United Nations nuclear experts.

Researchers at Stanford University’s Center for International Security and Cooperation estimated this month that Pyongyang had produced sufficient bomb fuel over the last eight months to add up to seven weapons to a nuclear arsenal believed to contain about 60 bombs.

The researchers said North Korea had expanded its stockpile of plutonium and highly enriched uranium, including at a previously undisclosed facility at Kangsong — one of about 20 sites detected on satellite imagery.

Though still upbeat, Trump sought to lower expectations of a breakthrough in Hanoi, telling reporters he “ultimately” would like to see North Korea denuclearize, but has “no pressing time schedule” because “the sanctions are on.”

“We’re in no rush whatsoever,” the president said Tuesday in the Oval Office. “We’re going to have our meeting.... As long as there’s no testing, I’m in no rush. If there’s testing, that’s another deal.”

On Thursday, a senior administration official involved in the planning was also circumspect.

“I don’t know if North Korea has made the choice to denuclearize,” said the official, who spoke on condition of anonymity. “We think there is a possibility.”

“North Korea can’t denuclearize in one fell swoop,” he said. “If the U.S. gives something, there will be reciprocal measures.”

North Korea has taken several confidence-building steps since Singapore, but they are limited and not permanent, said Thomas Countryman, who was assistant secretary of State for nonproliferation in the Obama administration.

“Everything they have done so far is easily reversible,” he said.

Perhaps the most important development is what didn’t happen. Kim’s government continued a self-declared moratorium on tests of nuclear devices and long-range missiles. It last tested an intercontinental ballistic missile in July 2017, and last conducted a nuclear test two months later.

The Stanford researchers said the testing moratorium had significantly hampered Pyongyang’s ability to expand its program.

Pyongyang continues to refine its nuclear technology, but U.S. experts say it apparently has not yet built a warhead robust enough to survive the intense heat and vibration of an ICBM as it reenters the atmosphere.

That leaves a window for diplomacy before the continental United States faces a direct nuclear threat from Pyongyang.

The most visible change came in July, a month after Singapore, when North Korea destroyed or dismantled portions of the Sohae launch site, near the border with China, the main facility for its satellite launches.

Sohae is believed to have equipment used to develop liquid-fuel engines for ballistic missiles and a warehouse where vehicles that transport missiles were assembled. The razing of the facility was hailed as important, but it’s not clear how much of the infrastructure was actually destroyed.

Some experts say North Korea had already begun transferring ballistic missiles to mobile launchers that could be used at other sites in the mountainous country.

Both the Trump and Kim governments have pointed to demolition at the Punggye-ri underground nuclear test site last May, a month before Singapore, as a sign of progress. North Korean technicians blew up entrances at the site, and later destroyed some of the tunnels where testing was conducted.

In October, Secretary of State Michael R. Pompeo praised what he said was Kim’s invitation to international nuclear inspectors to verify that the destruction had rendered Punggye-ri inoperable. To date, no independent inspections have been conducted; U.N. inspectors were kicked out of the country in 2009.

“There is less here than meets the eye,” said Daryl Kimball, executive director of the Arms Control Assn., an advocacy group in Washington. “There are plenty of places there and elsewhere that nuclear test explosions could take place.”

Stephen Biegun, the U.S. special representative for the Koreas, said Kim had offered to dismantle plutonium production and uranium enrichment facilities at Yongbyon if the U.S. also makes concessions. Plutonium and enriched uranium are used as nuclear bomb fuel.

“Dismantling Yongbyon would be a very big deal. It is the heart of the North’s nuclear program,” said Siegfried Hecker, one of the authors of the Stanford study and a nuclear scientist who visited the site multiple times.

Other experts note that Yongbyon was on the table during a previous, ultimately unsuccessful round of nuclear negotiations.

“Yongbyon was something North Korea had already agreed with the U.S. to give up in 2005,” Thae Yong-ho, North Korea’s former deputy ambassador to Britain and one of the highest officials to defect, told reporters in Seoul. “They’re trying to put a fresh coat of paint on an abandoned car and sell it to the U.S. once again.”

Kim is keen to win a formal declaration of the end of the Korean War, which was frozen with an armistice in 1953 but not an official treaty. A declaration would be symbolic since a treaty would require Senate ratification and approval of other nations who fought in the war.

Adm. Philip S. Davidson, commander of the U.S. Indo-Pacific Command that oversees the Korean Peninsula, echoed the assessment of the U.S. intelligence community that North Korea is unlikely to fully denuclearize.

“We think it is unlikely that North Korea will give up all of its nuclear weapons or production capabilities, but seeks to negotiate partial denuclearization in exchange for U.S. and international concessions,” Davidson told the Senate Armed Services Committee on Feb. 12.

Kim also wants the United States to ease sanctions that have squeezed the country’s economy. Some of those sanctions already have begun to unravel since Singapore.

Russia and China, North Korea’s principal ally and trading partner, last year advocated easing U.N. sanctions, many of which have been in place since North Korea tested its first nuclear device in 2006.

Moscow shipped a record 7,000 tons of refined oil to Pyongyang in December, the U.N. reported. U.S. officials said experts had confirmed nearly 150 incidents of illegal ship-to-ship transfers of oil by Russia to North Korea in 2018.

Despite the punitive measures, food and fuel prices and exchange rates have held relatively stable in North Korea, according to black-market rates tracked by groups in South Korea.