U.S. citizen is detained by ICE and asks why

‘In that moment, I realized, we don’t have rights’ 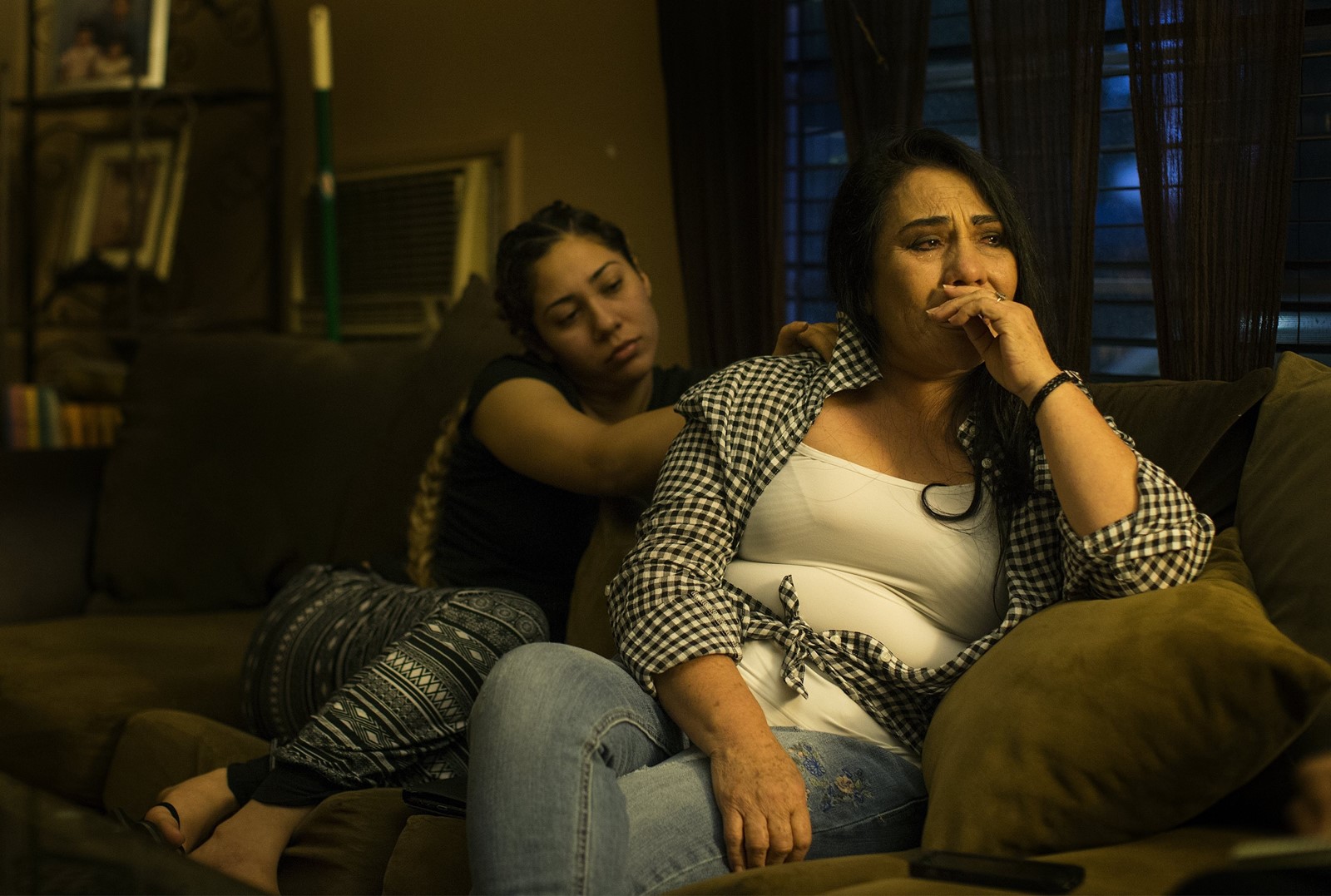 GUADALUPE PLASCENCIA is comforted by her daughter Mahria Torres in her San Bernardino home. The ACLU is taking legal action on her behalf. (Gina Ferazzi Los Angeles Times)
PREVIOUS IMAGE

Guadalupe Plascencia said she was alarmed when a San Bernardino County sheriff’s deputy asked her to sign papers related to her immigration status.

The 59-year-old hairdresser from San Bernardino had spent the night of March 29 in jail because of a decade-old bench warrant related to her alleged failure to appear as a witness in a court case. During her night in jail, Plascencia said, a deputy asked her to sign documents acknowledging that officials with U.S. Immigration and Customs Enforcement had inquired about her.

Confused and scared, Plascencia did as she was asked, assuring herself that the entire ordeal was a mistake that would soon be cleared up.

But as she tried to leave the West Valley Detention Center in Rancho Cucamonga, Plascencia said, she was met by immigration enforcement agents, handcuffed and placed in the back of a van. Plascencia would spend the rest of the day in ICE custody, fearful that she would be deported despite having become an American citizen some 20 years ago, following an amnesty program initiated by President Reagan.

“I felt helpless, like I was no one,” she said in a recent interview. “Here, they talk about rights … in that moment, I realized, we don’t have rights.”

Plascencia was eventually released after her daughter showed ICE agents her passport. But now she has taken the first step toward filing a lawsuit against the federal immigration agency and the San Bernardino County Sheriff’s Department in a case that raises issues of how an American citizen wound up in the custody of immigration enforcement agents.

It’s unclear how many hours Plascencia was detained by federal authorities, but she insists she repeatedly asserted her citizenship to deputies and ICE agents. She also says she presented a valid California driver’s license when she was arrested.

Plascencia’s case comes at a time when President Trump has pledged to increase detentions of immigrants who are here illegally and speed up deportations — and highlights the challenge of ensuring that American citizens are not caught up in such actions.

On Thursday, the American Civil Liberties Union mailed notices of claim, the precursor to a lawsuit, to both agencies, said Adrienna Wong, the ACLU staff attorney who is representing Plascencia. The documents claim that Plascencia was discriminated against based on her ethnic origin, and seek monetary damages in excess of $25,000.

San Bernardino Sheriff’s Cpl. Ruben Perez said ICE issued a detainer request for Plascencia on March 30, the same day she was to be released from jail. The detainer request is an alert ICE sends to a local law enforcement agency when police have arrested someone immigration officials want to take into custody on suspicion of being in the country illegally.

Perez said sheriff’s officials did not contact ICE or inquire as to Plascencia’s immigration status, adding that to do so would be against policy. Sheriff’s Department officials did submit her fingerprints to an electronic database accessible by federal and state law enforcement agencies, which is standard law enforcement practice.

An ICE spokeswoman would not say whether the agency issued a detainer request for Plascencia. In a statement, the agency said it was barred by law from discussing specifics about a case involving a U.S. citizen.

“ICE would never knowingly take enforcement action against or detain an individual if there was evidence indicating the person was a U.S. citizen. Should such information come to light, the agency will take immediate action to address the matter,” the statement read.

Like many other departments in the state, the San Bernardino Sheriff’s Department has insisted it does not honor ICE detainer requests because of questions over the constitutionality of that practice. San Bernardino Sheriff John McMahon, however, has said he wants to find ways to work more closely with immigration authorities while also adhering to laws.

“To be quite honest, those that are wanted by ICE, that are detained in our facilities, are dangerous criminals,” he said in an interview posted to the department’s YouTube page in February. “If we allow that inmate to walk out of our jail, and ICE isn’t there to pick him up, that inmate returns to the community. That could pose a danger for the public that we serve and try to protect.”

That level of cooperation between ICE and local law enforcement, however, can create situations like that faced by Plascencia, Wong said.

“Their cooperation with ICE is voluntary. This is why we generally say it’s a bad idea for law enforcement agencies to interact with federal immigration enforcement because they could be held liable” when illegal detentions occur, she said.

The arrest that sparked Plascencia’s detention by ICE is connected to a 2007 court case involving her son, Eric Mercado, that was ultimately dismissed, court records show.

It started when Plascencia visited the Ontario Police Department in March to recover a gun, which she legally owns, that had been seized after her daughter was involved in a car accident last year.

As she waited in the police station, officers told her she was going to be arrested on a warrant. Court records indicate a bench warrant was issued for Plascencia after she failed to testify in the 2007 case.

Her daughter, Dulce Sepulveda, confirmed that Eric is her brother. Plascencia said she didn’t know she was required to testify in the case.

Plascencia said she was then transferred to the custody of the Sheriff’s Department, where she was repeatedly asked to sign forms relating to ICE.

Perez said the documents Plascencia signed were intended to notify her that ICE had inquired about her scheduled release date and issued an immigration detainer for her. Police are required to make inmates aware of such actions under California law, Perez said.

She was arrested by immigration agents as she left jail the next day. While in ICE custody, Plascencia said, she feared she would be deported. She said agents were verbally abusive to her.

“You’re no one until your situation is cleared up,” Plascencia said she was told by an ICE agent.

Sepulveda eventually arrived at the ICE office and presented Plascencia’s passport, prompting her release. In the notice of claim, the ACLU accused ICE of violating Plascencia’s rights by detaining her and ignoring clear evidence that she is a U.S. citizen.

“ICE breached the duty of reasonable care it owed to Ms. Plascencia by arresting her and continuing to detain her when it had information about her citizenship,” the document reads.

Plascencia and her family say the experience has shaken their ideas about the protections they are entitled to as American citizens. Sepulveda said she is now afraid to leave the U.S., the country she was born in.

“I really thought they were going to try anything in their power to take her out of the country,” Sepulveda said. “I didn’t know who to talk to…. I didn’t know what to do.”