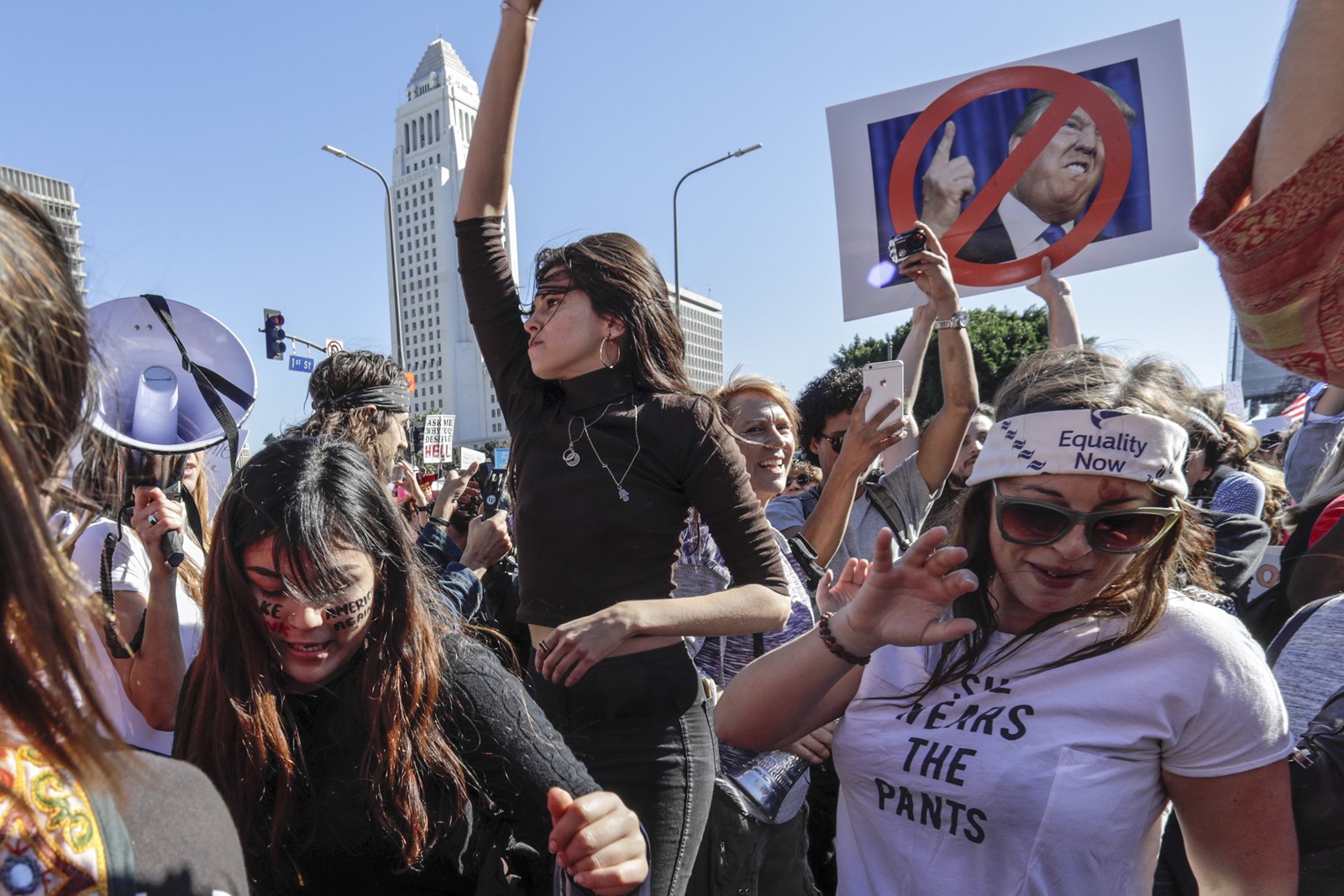 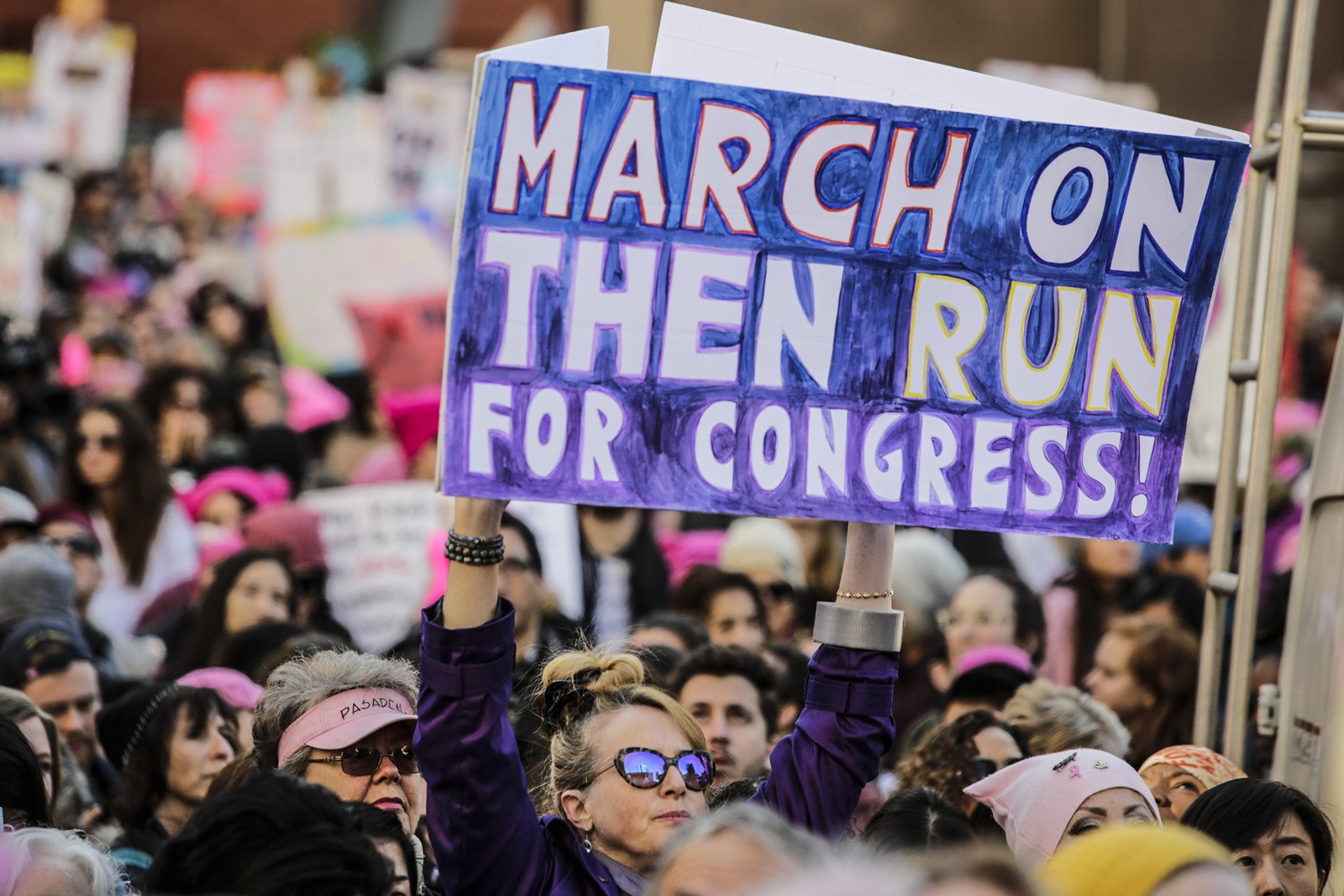 In a boisterous coast-to-coast outpouring, hundreds of thousands of marchers in dozens of cities staged a reprise of last year’s massive Women’s March, seeking to not only deliver a powerful rebuke to the policies of President Trump, but also mount a crucial mobilization for this year’s midterm election.

“Because of you, the revolution is rolling!” actress Natalie Portman told marchers in downtown Los Angeles, drawing — like many speakers in the #MeToo movement — on the drive to hold powerful men accountable for sexual misconduct, a galvanizing force at many of the rallies.

“Everything is at stake,” actress Jane Fonda told marchers in snowy Park City, Utah, scene of the Sundance Film Festival, in another nod to the #MeToo movement. “We’ve got to give it all we’ve got. Time is up!”

In addition to the roll call of major American cities where marches took place — including New York, Washington, Los Angeles, Dallas, Philadelphia, Chicago, San Francisco, Atlanta — protesters also raised their voices in suburbs and small towns, reflecting the aim of coalescing a widespread movement on the anniversary of Trump’s inauguration to oppose the president’s stance on immigration, healthcare, racial divides and an array of other issues.

Against the backdrop of the U.S. government shutdown that took hold Saturday, many marchers pointed to the irony of the closure of iconic sites associated with the fight for liberty and equality, such as the Statue of Liberty and the visitor center at the Martin Luther King Jr. National Historic Site in Atlanta.

Like last year’s protests, these overspilled U.S. borders, with dozens of overseas gatherings. At a linked event Saturday in Rome, Italian actress-director Asia Argento, one of movie mogul Harvey Weinstein’s accusers, called on women to “speak out and change things.”

Among the crowds that gathered in Pershing Square in downtown Los Angeles for a rally before marching to Grand Park in front of City Hall, Scarlett Cunningham-Young, 11, stood next to eight of her friends and their families, holding a sign with a quote by Nobel Peace Prize laureate Malala Yousafzai, who as a Pakistani schoolgirl survived an assassination attempt by the Taliban.

It was Scarlett’s second year attending the Women’s March, and she said she felt inspired by a thrilling sense of common purpose. “I hope that this country wakes up and realizes that women and girls have voices, too,” she said.

There was a short confrontation between Trump supporters and some marchers near the end of the march route near Los Angeles Police Department headquarters, where a group of eight pro-Trump activists stood waving flags and speaking through bullhorns.

Women’s March volunteers stood in a line holding hands in front of the pro-Trump crowd, separating the group from the bulk of the marchers. Dozens of police officers kept watch.

Despite the gravity of the issues at hand, the mood at many of the rallies was lighthearted. Marchers vied to outdo one another with droll signs — “Ugh where do I start,” read one, while another declared: “If you take away my birth control, I’ll just make more feminists.” The age spectrum ranged from babies in strollers to elders helping one another along, with large numbers of men marching along with women.

To a certain extent, ethnically mixed crowds in many locales reflected big-city demographics, although the year’s protests were also the subject of pointed commentary about the inclusiveness of the #MeToo movement, with its roots in Hollywood and among the elite.

Actress Viola Davis, addressing the enormous rally in downtown Los Angeles, crystallized those sentiments, demanding a voice for the voiceless.

In Trump’s hometown of New York, crowds were backed up for dozens of blocks leading to the rally site on the edge of Central Park. Marchers in sashes with the words #MeToo and #TimesUp were at a standstill on side streets where pink “No Parking” police signs on barricades blocked off sidewalks.

In Washington, the march made its way to the very gates of the White House. Groups gathered early in the shadow of the Lincoln Memorial under crystal-clear skies. Brazilian drummers warmed up the crowd to cheers.

Later, though, protesters were able to gather within earshot — and in a direct sightline — of the White House, massing on a stretch of Pennsylvania Avenue that was closed last year for the inauguration.

Because of the government shutdown, Trump was in town, having put off a trip to his Florida resort of Mar-a-Lago for a glitzy $100,000-per-couple fundraiser. The president went on Twitter to hail the anniversary of his inauguration, suggesting that marchers could use the occasion to celebrate his accomplishments.

“Beautiful weather all over our great country, a perfect day for all Women to March,” he tweeted. “Get out there now to celebrate the historic milestones and unprecedented economic success and wealth creation that has taken place over the last 12 months. Lowest female unemployment in 18 years!”

Sen. Kirsten Gillibrand (D-N.Y.), who was the target of a recent Twitter attack by the president in which he appeared to insinuate that she was willing to trade sexual favors in exchange for financial support, addressed the crowd in the capital, telling them: “It is women who are holding our democracy together in these dangerous times.”

Trump was repeatedly invoked, and not just because it was the first anniversary of his inaugural. Last year’s nationwide marches came only months after the “Access Hollywood” tape of Trump bragging in crude terms about groping women without their consent — the genesis of the “pussyhats,” or pink cat’s-ears hats, that made a robust reappearance at Saturday’s protests.

This year, many marchers marveled at the president’s seeming impunity even as #MeToo has forced so many perpetrators of sexual misconduct from positions of power.

In Texas, more than 4,500 people marched through downtown Dallas. Many said they felt the need to demonstrate that a red state is rapidly diversifying, especially in its largest cities.

“I’m rooting for Texas to become a swing state,” said Andres Ramirez, 35, of Fort Worth, who works in a call center and is campaigning for the Democrat who is attempting to unseat GOP Rep. Pete Sessions.

In Atlanta, thousands of activists gathered at a squat, brightly painted warehouse in a poor but gentrifying neighborhood southwest of downtown as organizers set up booths on voting, women’s healthcare and civil rights.

Rather than march again, organizers of Power to the Polls planned the event to inspire more progressive candidates to run for office, register voters and educate activists on how they can effectively mobilize people to vote.

The point is to go beyond another feel-good moment, said Janel Green, one of the organizers of the Atlanta Women’s March last year. “We’ve already mobilized,” she said. “It’s time now to translate that momentum into impacting elections. We’ve got to develop strategies to mobilize and inform voters.”

All across the country, organizers said electoral politics are increasingly taking precedence over street activism. There are 390 potential female candidates for the House of Representatives, almost double the 202 women running at this time in 2016, according to the Center for American Women and Politics at Rutgers University.

Some organizers said they see the marches as galvanized by concern about a broad range of issues that disproportionately affect women.

“Before the Women’s March, we just didn’t have the support of other women in such an open and loud way,” she said. “Now we can share our stories and be heard a lot more than before.”