The new USC Village feels like a Disneyland/Hogwarts mash-up 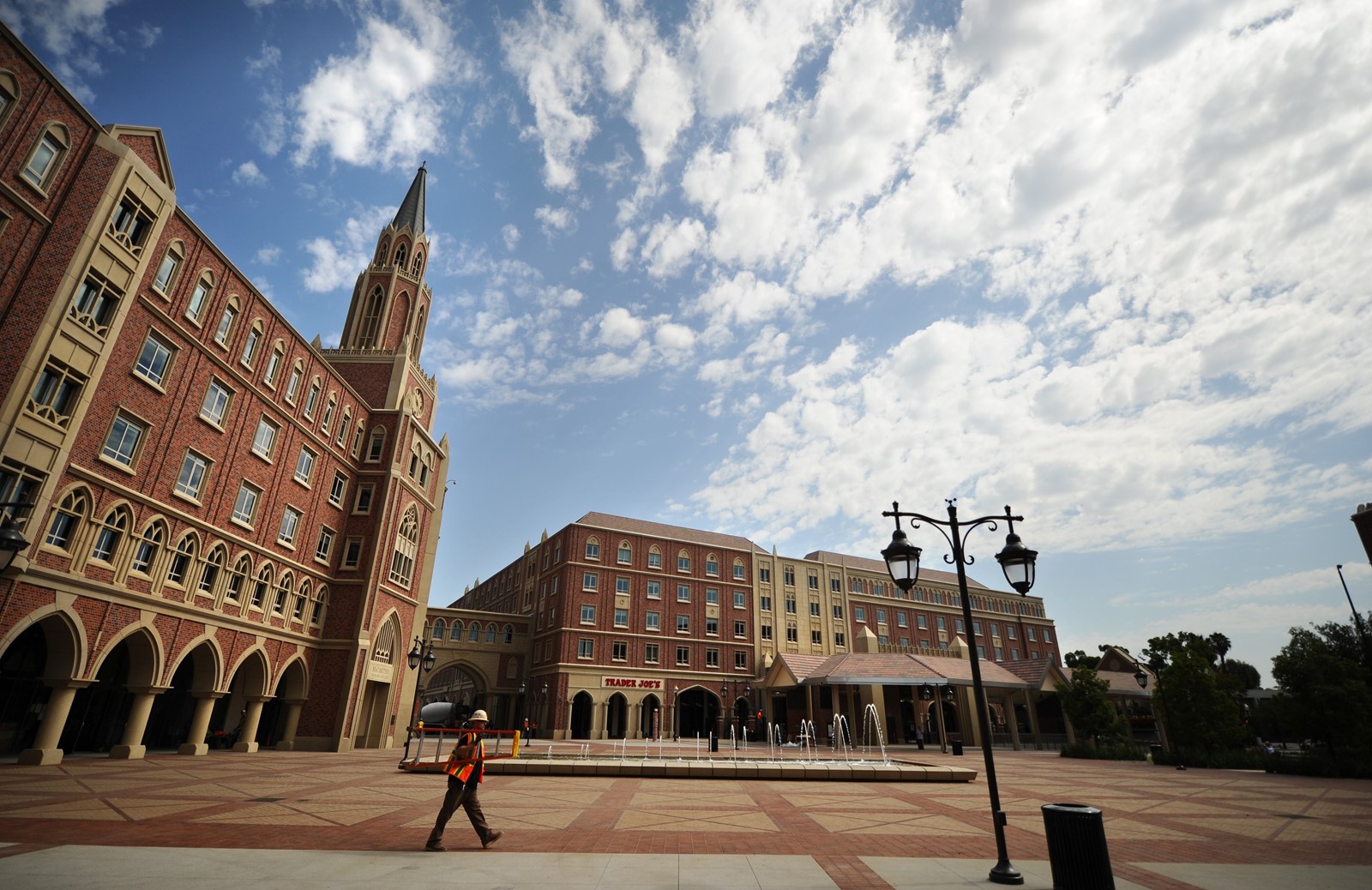 At a ceremony last week to mark the opening of the $700-million USC Village, C.L. Max Nikias, the university’s president, spoke at some length about the architecture of the new complex and what he called “USC’s extraordinary physical metamorphosis” in recent years.

He pointed out the similarities between the red-brick Village and USC’s 1930 Physical Education building, designed by John and Donald Parkinson. He praised the design of the 3-year-old Annenberg School for Communication and Journalism, which like the Village was designed by the Los Angeles firm Harley Ellis Devereaux in the neo-traditional Collegiate Gothic style.

Then came his ringing conclusion: “And let’s always remember, the looks of the University Village give us 1,000 years of history we don’t have. Thank you, and fight on!”

Even delivered in a vacuum it would have been a remarkable statement: the president of the leading private university in Los Angeles taking up, as a rhetorical cudgel, one of the laziest clichés about the city, that it has no history to call its own.

At an event marking the opening of that president’s signature architectural initiative, though, it took on more shades of irony than Nikias probably realized. It’s precisely the Village’s misreading of the architectural history of the USC campus — and the cultural history of Los Angeles — that leaves it looking so undernourished and out of place.

Despite its nostalgic trappings, this isn’t an architecture that remembers. It’s one that forgets.

The Village is the most ambitious of the building projects Nikias has overseen since taking up the USC presidency in 2010. The university describes it as “the biggest development in the history of South Los Angeles,” though the Coliseum might have a better claim on that title; Nikias called it “the most prized jewel in the crown of our campus.”

Covering 1.25-million square feet on a 15-acre site bounded by Jefferson Boulevard, McClintock Avenue and Hoover Street, it represents a major expansion of USC’s architectural footprint north of Jefferson and into the city at large. Along with residential suites for more than 2,500 students — a nearly 25% expansion of campus housing for undergraduates — its six five-story buildings hold a fitness center, classrooms, a dining hall and ground-floor retail spaces, open to the public, that include a Target and Trader Joe’s.

The completed Village suggests that however effective the thousand-years slogan might be as a fundraising pitch, it’s a shaky foundation for new architecture. With its Gothic ornament, peaked arches and 150-foot clock tower, the complex is a fantasia of just-add-water heritage, equal parts Disneyland and Hogwarts.

Even more striking, the Village barely pretends to have the courage of its neo-trad convictions. Once you walk inside any of the buildings it becomes clear that the Gothic exterior is a stage set, a false front behind which lies adrearily conventional series of spaces.

The main courtyard of the Kathleen L. McCarthy Honors College, which houses 550 first-year students in the heart of the Village, is lined in plain stucco. The suites are similarly utilitarian. The complex was built on an aggressive timetable, using a system of 2,500 precast panels, and it shows. Even the interior spaces that are meant to look fully aged — such as the 8,000-square-foot dining hall, with seating for 400 — barely conceal the fact that the traditionalism of the Village is essentially painted on.

The importance of the Collegiate Gothic style for USC, in other words, is not the message it sends to current students as much as prospective ones and their parents, along with trustees and donors: that USC is gearing up to compete with the Ivy League. (Unlike the similarly old-fashioned but far better appointed new residential colleges at Yale, which I saw the day before the Village and will be writing about soon, the USC project abandons the Oxbridge touches everywhere the public won’t go.) This is architecture as veneer, as drone fodder, as brochure material.

Considering Nikias’ masterful success as a fundraiser, it would be hard to find fault with that message in purely pragmatic terms. At the same time, by insisting on a kind of architecture that advertises its faith in continuity and context, USC is not stitching itself into but setting itself apart from Los Angeles.

The easiest way to define the city’s culture is to say that it’s the opposite of doctrinaire; the easiest way to explain the city’s history is to say it’s made up of a series of productive flights from history — from the history of other places, to be specific. The finest L.A. architecture has always embraced that freedom from custom and expectation.

And to the extent that the Village is meant to offer a history lesson of its own, it’s a spotty one.

For those who would defend the architectural tastes of the current USC administration, the urtexts, the foundational designs, are the Physical Education building Nikias mentioned last week and Ralph Flewelling’s 1929 Mudd Memorial Hall of Philosophy.

Each is an important work of architecture. And each is Romanesque Revival (arched openings and horizontal bands of brick and stone, often warmly communitarian in spirit) rather than Gothic (peaked openings, vertical emphasis, a general severity). There’s certainly a red-brick tradition in USC architecture. The idea that there’s a specifically Gothic one is a fiction.

More to the point, USC’s architectural history hardly ended there. Thanks largely to a master plan commissioned in 1961 by USC President Norman Topping from William Pereira, the school has a rich stock of midcentury and late modern buildings by talented architects including (in addition to Pereira himself) Edward Durell Stone, Edward Killingsworth and A. Quincy Jones.

Very few of these could be fairly grouped with the aggressively acontextual buildings that did so much damage to the fabric of other American college campuses in the postwar decades. Many, such as Killingsworth’s 1965 University Religious Center, suggest a far more thoughtful, even delicate modernism.

The Killingsworth building is next door to another sizable Nikias project, the Glorya Kaufman International Dance Center. Designed by the architecture firm Pfeiffer, it opened last fall. To see those two buildings side by side is to understand at a glance how gracelessly USC is remaking its campus.

It’s enough to make you wonder what the USC faculty makes of the recent building spree and what it says about the university’s priorities. Perhaps some professors see the old-fashioned architecture as faintly embarrassing but a small price to pay for the very real benefits that come with relentless fundraising and growing budgets.

That fundraising has boosted the intellectual life of the campus in unmistakable ways. There has been money to hire brilliant scholars away from other schools, which in turn has helped lure top students from high schools around the country.

The slow creep of Collegiate Gothic across the campus (and now beyond it, into the neighborhood directly north) has sent a different message about the kind of place USC aims to be. The Village is the product of an architectural strategy expansionist and insular at the same time. It suggests the natural outcome of a requirement that all significant new campus buildings pretend that they’re old, which is to say a requirement that rules out any connection between architecture and the cultural evolution of Los Angeles.

And unlike the Grove outdoor shopping mall and places like it, which aim for a similar unreality, the Village is part of an explicit effort by USC to reach out to and engage with the city itself, not build an oasis from it. The contradiction between that effort and the architecture of the complex is basic and striking.

As it turns out, though, the Village is a surprisingly useful measuring stick for a city that is both changing quickly — especially in the downtown core, a few blocks north of USC — and coming to value on its own terms its singular and easily caricatured urbanism.

What cheers me most about the Village is that it stands out like a sore thumb in the surrounding urban landscape, that familiar, vital L.A. fabric of high-low electicism.

Notice how the nearby neo-Moorish Shrine Auditorium (John C. Austin and Abram Edelman, 1926) doesn’t just rise from but seems entirely comfortable in a patchwork of strip malls, schools, palm trees, alleys and parking structures? I’ll take that cacophony over the internal consistency of the Village — its oddly superior sense of rectitude, its sense that its middling architecture ought to put it at the top of the class — any day.