How L.A. went from bone-dry to sopping wet 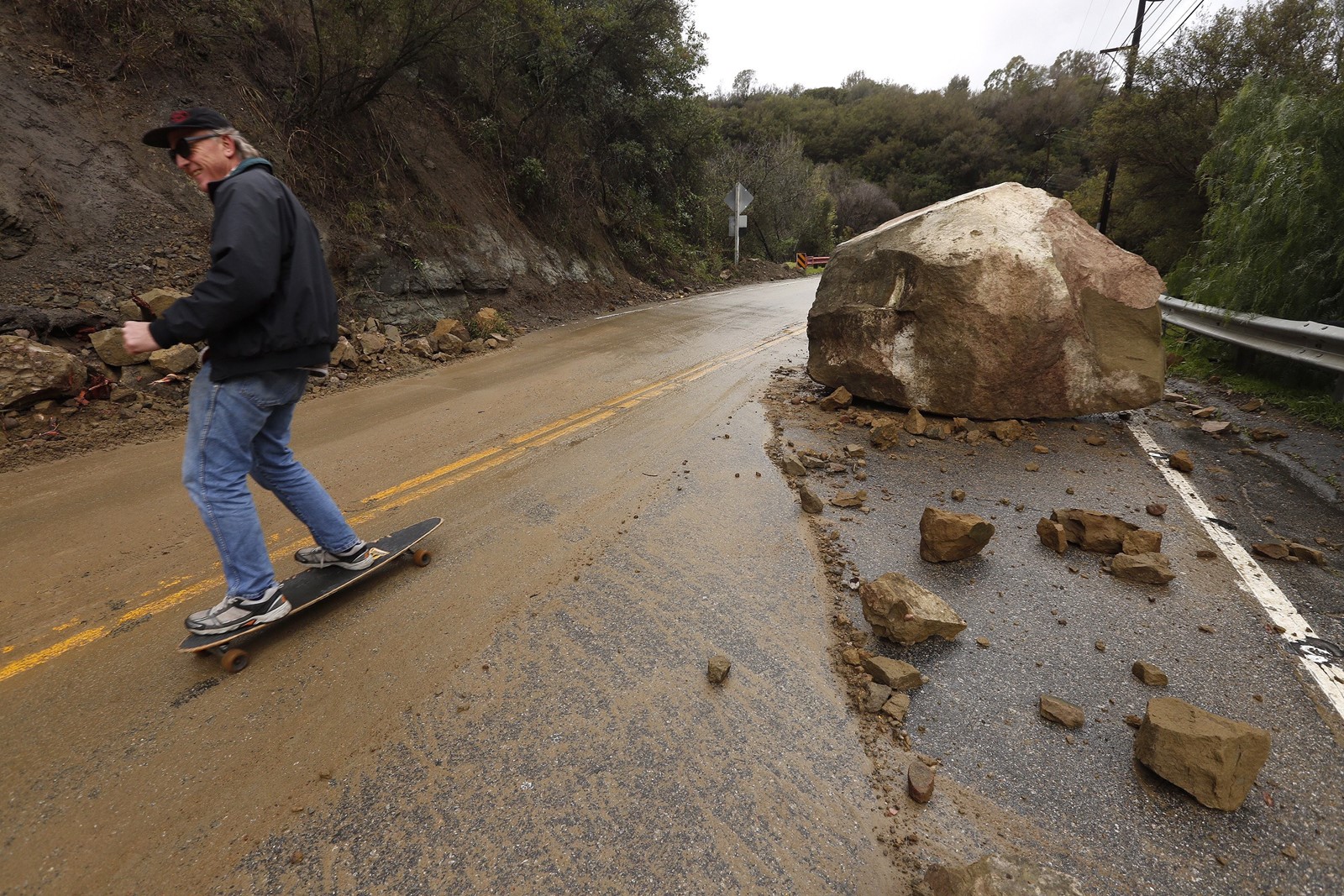 WITH THE thoroughfare closed, Paul Doolin uses a skateboard for his transportation as he zooms past a fallen boulder on Topanga Canyon Road in Malibu. (Genaro Molina Los Angeles Times)
PREVIOUS IMAGE

At the end of June, Los Angeles had recorded its driest five-year period since record-keeping began almost 140 years ago.

The announcement seemed like an ominous milestone, especially after an El Niño-fueled weather pattern that was supposed to drench the region had failed to materialize.

Los Angeles is experiencing its wettest winter in years, with 14.33 inches of rain since October — more than 200% of average. That’s nearly as much rain as the city gets in a typical year.

So how did Southern California go from high and dry to wet and wild so quickly?

Also a factor is the famous mass of drought-causing high pressure that once shooed winter storms away from California and was called the Ridiculously Resilient Ridge. This year, that mass of high pressure has been much more transient, shuttling between Hawaii, Baja California and California. When it has gone traveling, that’s opened up a path for wet storms to reach California, Anderson said.

“It’s just the right set of circumstances that everything lined up for California,” Anderson said. “If things line up just right, it sets up for conditions for a very wet California.”

That has meant the arrival of both cold storms from the north Pacific Ocean and warmer, subtropical moisture plumes targeting California, a perfect combination that has dumped astonishing levels of snow in the Sierra Nevada — as much as 20 to 30 feet — and dropped impressive rain in Southern California that flooded freeways and triggered mudslides.

In fact, the last rainstorm was a hybrid of both types, UCLA climate scientist Daniel Swain said. The cold, strong storm from the Gulf of Alaska combined with warmer, moister, subtropical air over L.A., which caused hail around the region and heavy, intense rain on the south L.A. County coast. On Sunday, 3.87 inches fell at Long Beach Airport, setting an all-time record for the area.

“It’s not common to see a full day of soaking rain in this part of the world,” Swain said.

What California is actually seeing this winter was what experts had expected last year, as a massive El Niño — a warming of ocean temperatures in the Pacific Ocean — developed.

“We have these very strong west-to-east winds — we call them zonal winds — at the jet stream level in the atmosphere that has sort of propelled this prolonged series of storms toward California … and actually allowed these storms to strengthen,” Swain said. The presence of this strong jet stream is key, Swain said, as California lies in a region in which storms often weaken as they approach the state.

Last year, the strong west-to-east winds over the Pacific Ocean did develop, but instead of being aimed at Southern California, it benefited areas to the north, especially Oregon and Washington. “This year, it really is headed right at us,” Swain said.

With three storms hitting Southern California in five days, there hasn’t been time to dry out between them. “We’ve seen water flowing now in most all of the different streams and larger rivers in Southern California, which is the first in about six years,” National Weather Service meteorologist Eric Boldt said.

In the past, when there has been no El Niño or La Niña — neither a warming nor a cooling of the Pacific Ocean at the equator — significant rainfall for California can occur. Such “La Nada” conditions were present in the winter of 2004-05, which produced the second-wettest rainy season in downtown L.A. history. Those rains preceded devastating landslides in La Conchita in Ventura County and Bluebird Canyon of Laguna Beach.

“With a La Nada — no El Niño, no La Niña — anything can happen,” said Bill Patzert, climatologist at the Jet Propulsion Laboratory in La Cañada Flintridge. He also noted that the atmospheric river storms are coming from an area of the ocean that has warmer temperatures. “That’s a hangover from El Niño.”

The atmospheric river storms have arrived in a number and size not seen in years, said Marty Ralph, director of the Center for Western Weather and Water Extremes at the UC San Diego Scripps Institution of Oceanography.

Atmospheric rivers are long plumes of concentrated water vapor that are an important feature of the global water cycle. Strong ones can transport as much vapor as equivalent to 20 times the liquid water discharged by the Mississippi River at any given moment. Atmospheric rivers are responsible for 40% to 50% of California’s annual precipitation, Ralph said.

“When have a lot of them, sometimes we get into flooding. When we don’t have enough of them, we get into drought,” Ralph said.

But there is still a long way to go before any victory can be declared. Lake Perris is filled to only half of its normal level. Lake Cachuma in Santa Barbara County is still only 13% of its historical average for this time of year.

“While the rain was pretty impressive and welcomed here by everyone watching the skies, it was certainly not enough to end the drought or to fill up the lake significantly,” said David Matson, assistant general manager of the Goleta Water District.

The groundwater supply is also far from recovered. Southern California has been drawing down groundwater reserves during the drought. Parched soils have absorbed much of the water, limiting runoff. And many of the region’s groundwater basins remain severely overdrawn.

“Don’t be mistaken — they are depleted … severely depleted,” said Mark Pestrella, acting director of the L.A. County Department of Public Works. “We are not out of severe drought here in Southern California. We will need three identical years of this type of year to come out of this drought cycle.”

For instance, the Key Well level at the Main San Gabriel Groundwater Basin in Los Angeles County dropped to a historic low of 172.2 feet in October. The historic high was more than 295 feet, achieved in 1983 after one of the wettest winters in recorded California history.

The U.S. Drought Monitor recently revised its map to show no signs of drought conditions in Northern California because of recent rains. The map has been criticized by some experts for oversimplifying the situation in California who say weekly changes in weather patterns don’t mean the drought is over.

“People are still relying on bottled water in some parts of Tulare County. And some surface reservoirs are remarkably low. These are impacts that can’t be ignored when you’re assessing whether you’re still in a drought,” said Doug Carlson, spokesman for the California Department of Water Resources.