Thomas fire could burn for weeks in Ventura County 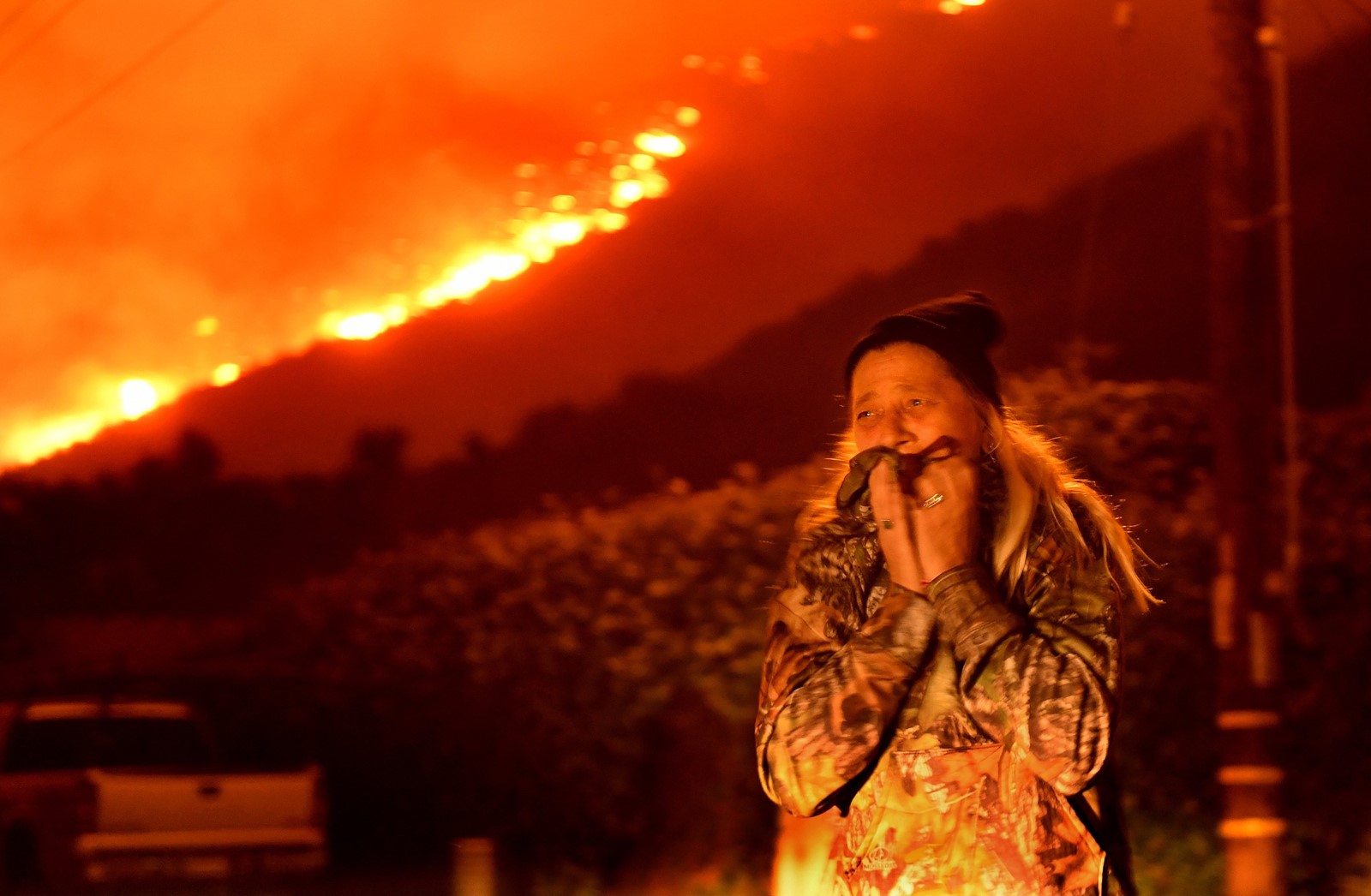 EVA SMATHERS reacts to the flames from the Thomas fire bearing down on the coastal enclave of La Conchita in Ventura County. (Wally Skalij Los Angeles Times)
PREVIOUS IMAGE

Fiery tornadoes churned up the slopes of Matilija Canyon, eating only brush for now.

Jayson Kaufman kept his eye on them and the smoke closing in. Ignoring a mandatory evacuation order, he figured he still he had time to pack and escape if the flames made a run toward his cabin in the remote box canyon.

While firefighters gained ground in containing other wildfires around the region, in Ventura County they feared wind could drive the flames into Carpinteria on the coast. Without rain, they said, the fire could burn for weeks in remote parts of the Los Padres National Forest.

“My hope is that within a week, the issues around the population areas are going to be gone, but then it’s still going to be up in the forest in the wilderness areas,” Ventura County Fire Chief Mark Lorenzen said. “The size and the scope of this thing is going to be enormous…. There’s no road out there, and the wind is pushing it. You can’t put anybody out in front of it.”

Fire crews succeeded in keeping the flames out of the resort town of Ojai overnight Wednesday and into Thursday morning. City officials called it “a miracle” that the winds abated just in time.

“We were waiting for them, but they didn’t come,” said Rudy Livingston, Ojai’s finance director. “All I can say is, ‘Thank God.’ If they came, it would have been very ugly here.”

But as winds ebbed, then bellowed, then ebbed again, residents on different sides of the fire were on high alert throughout the day.

A good quarter of the 60 or so denizens of Matilija Canyon — known for survivalist types and back-to-the-landers living in rugged cabins, trailers and geodesic domes — ignored the evacuation orders to save their homes. They were briefly trapped, had they cared to leave, when wind and fire knocked down power lines, telephone poles and boulders on Highway 33 north of Ojai.

By late morning the debris was cleared and fire engines were on the way. Kaufman watched as clouds of red, orange and gray smoke rose from ridges. The smoke began to gather into a giant pyroclastic cloud, looming like a thunderhead over the Ojai Valley.

“It’s looking pretty bad out there,” Kaufman said. “But it’s still not time to leave.”

Across the county, the fire had consumed 115,000 acres, destroyed 439 buildings and damaged 85 others as it continued to move. A woman’s body was found Wednesday night at the site of a car accident on Wheeler Canyon Road. The cause of death and the woman’s identity have not been determined, Ventura County Sheriff’s Sgt. Kevin Donoghue said.

With relative humidities in the single digits along the coastal mountains, the air is the driest it’s been in recorded history, said UCLA climate scientist Daniel Swain.

“The [relative] humidities right now along the coast are much drier than what you’d normally see in the interior desert in the summertime,” Swain said. “Once you get down to 1% or 2% you’re down almost as low as is physically possible.”

That air combined catastrophically with vegetation that grew thick in a wet winter and withered through summer and a hot, dry fall.

In the coastal enclave of La Conchita, where 10 people died in a landslide in 2005, the orange glow at night was too ominous for many residents to risk staying. Steve Holmstrom, 62, drove up to Carpinteria to stay with his children.

Thursday morning, he walked along the shoulder of the 101 Freeway to catch a glimpse of his little wood house on Fillmore Avenue.

It looked intact, even though the abandoned structure next door had burned down.

“These firefighters are amazing. This whole place could’ve gone,” he said. “I feel so much better. Last night was kind of a panic.”

The situation was more dire just down the coast at Faria Beach. Homeowners took to their roofs with hoses when midmorning gusts began driving the fire and embers out of the mountains and across the 101 and Pacific Coast Highway. A palm tree nursery caught fire, creating a blizzard of flaming debris.

A police car drove up and down the road with a megaphone blaring warnings: “Mandatory evacuation,” and, “Please go the other way, the road is closed.”

Fan palms in the neighborhood erupted.

Maurice Shimabuku, 67, tried to keep a tree in front of his house wet, but the water pressure had dropped.

“It was like shooting a water pistol on an elephant,” he said later.

He worried about wind damage as much as fire.

“These were some freakish winds,” he said.

Like the other neighborhoods clinging to a sliver of flat coastline north of Ventura, the three-quarter-mile single street of houses, cut off by freeway and sea, is a tight, funky community.

Alicia Stratton evacuated but didn’t go far. She stood along the railroad tracks, watching the whorl of flames a few hundred feet away, talking to a friend on the phone who was watering her house.

“This fire kept migrating,” she said.

Fire officials said the winds were particularly hard to predict around the ocean, with gusts up to 50 mph.

With six engines at Faria Beach, firefighters saved the homes there. But Ventura County Fire Department spokesman Rich Macklin said the concern was shifting to the northwest and Carpinteria, with a population of more than 13,000.

“We’re going to start moving with it,” he said.

Nearby Ventura had a respite from fire.

But firefighters still pored through neighborhoods putting out hot spots, particularly in mulch and ornamental shrubbery around homes, which can hold embers for days.

“If we do get an increase in winds, it will take a smoldering spot beneath a bush, the bush will start on fire and then we’ll have a fire in the neighborhood again,” said California Department of Forestry and Fire Protection spokesman Bill Murphy.

Murphy said Santa Paula had a good fire line around it but could be affected by strong north or northeast winds.

“We’re talking 96,000 acres…. Every corner of the fire has a community that we need to address and pay attention to,” Murphy said.

Maria Calderon and her partner, Eric Schmidt, a ceramic artist, had decamped from Long Beach with their 3-year-old son, finding a barn and cottage in the hills above Ojai along Highway 33 where their young family could thrive.

They moved in barely a month ago and tried to make it their own. The barn was to be a studio for Schmidt. The 45-acre spread had native flowers and fruits that Calderon could use to make natural dyes and grow food.

As the fire crept across the Ojai Valley on Wednesday, Calderon and her partner had prepared to evacuate the property, about three miles north of Ojai city limits.

She packed up most of her textile art and loaded other possessions into the car. Meanwhile, she said, they used buckets to dump water on the roof and gardens to limit the chance of embers stoking a blaze. Finally, late Wednesday, they had to leave.

“My foot was shaking on the pedal,” Calderon said as she drove south, fleeing the approaching fire.

After waking up to images of her home in ruins, a pile of smoldering rubble, she finds herself facing a grim question: how to tally the loss of what could have been?

“We had never felt so at home before,” said Calderon, who came from Kansas to Southern California about six years ago. “After years of searching, we found the perfect place.”