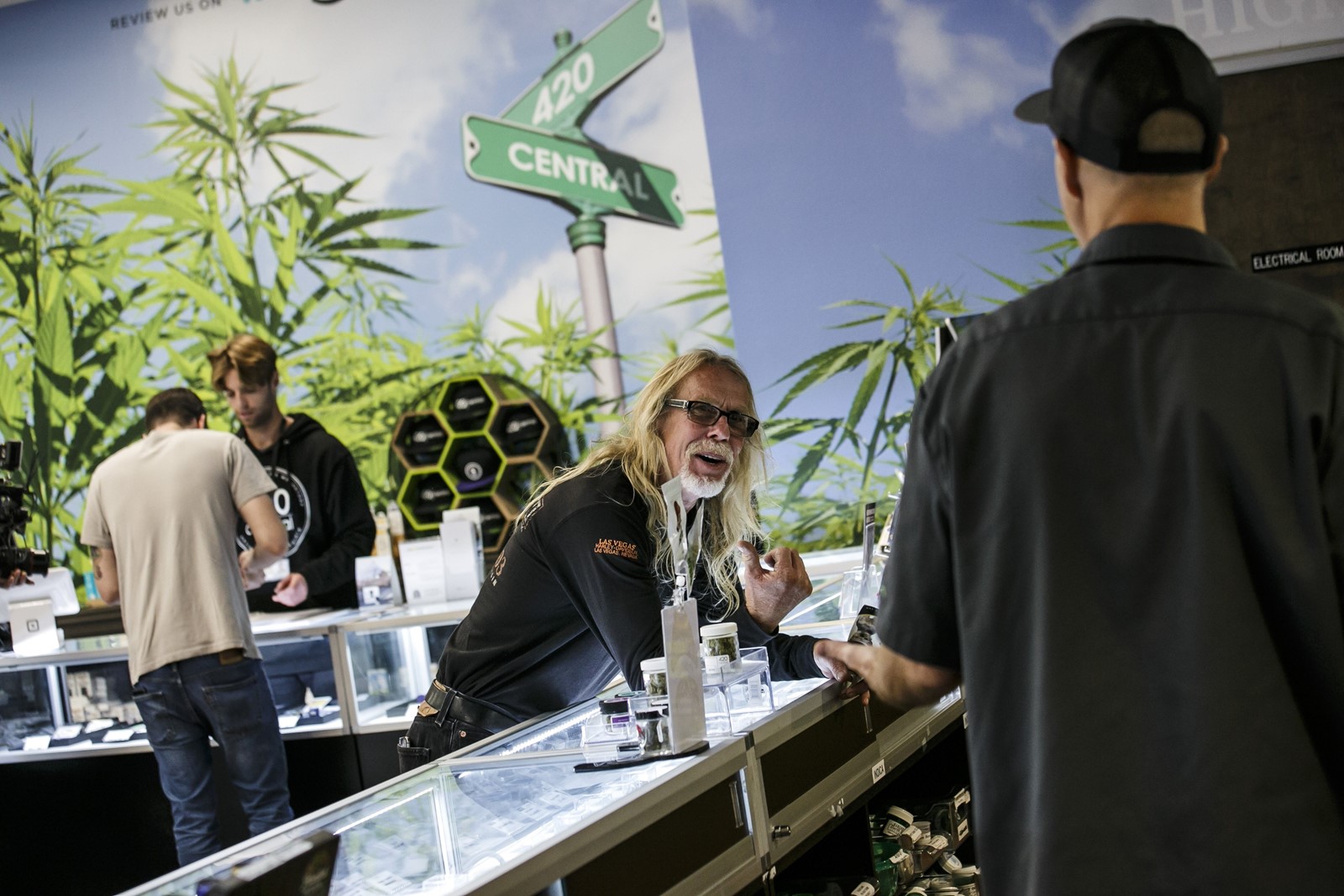 The Justice Department move on Thursday plunged into further uncertainty, and was met with a bipartisan backlash from lawmakers in states where marijuana is now sold legally to any adult who wants to buy it.

“It is the mission of the Department of Justice to enforce the laws of the United States,” Sessions said in a statement, which added that the Obama-era policy that directed federal prosecutors not to target state marijuana businesses “undermines the rule of law and the ability of our local, state, tribal, and federal law enforcement partners to carry out this mission.”

States that have legalized prepared to fight.

“In California, we decided it was best to regulate, not criminalize, cannabis. Unlike others, we embrace, not fear, change,” state Atty. Gen. Xavier Becerra said. “After all, this is 2018, not the 20th century. At the California Department of Justice we intend to vigorously enforce our state’s laws and protect our state’s interests.”

Lt. Gov. Gavin Newsom tweeted on Thursday: “Have no doubt — California will pursue all options to protect our reforms and rights.”

With the California industry expected to generate up to $7 billion a year eventually, the Justice Department announcement was likely to chill potential investors in the state’s pot market, industry leaders predicted.

But California’s state Bureau of Cannabis Control, which on Monday began processing hundreds of applications for businesses seeking to legally grow, transport and sell marijuana, showed no sign of slowing after Sessions’ announcement.

The bureau’s chief, Lori Ajax, vowed to continue issuing permits “while defending our state’s laws to the fullest extent.”

“There is nothing that I can see the state attorney general could possibly do to preclude a marijuana prosecution under federal law,” said industry attorney Aaron Herzberg.

He said the U.S. Supreme Court had ruled on the matter. “The federal supremacy clause governs.”

Politically, however, officials in states that have legalized pot feel they’re on stronger ground, given the growing public acceptance of legalized marijuana and the sheer scale of the rapidly expanding legalized industry.

Sessions notably did not order federal prosecutors to begin a stepped-up assault on marijuana, instead saying he would leave the decision up to each of the country’s 93 U.S. attorneys. That approach could lead to vastly different federal law enforcement from state to state or even within larger states that have several U.S. attorneys’ offices. California, for example, has four.

The attorney general has, however, expressed specific concerns about marijuana policies in California. In a remark after a news conference last month, for example, he said he was disturbed about California’s role as a pot-exporting state, noting that much of the state’s crop ends up on the black market.

Whether federal prosecutors have the resources, or even interest, to thwart the national movement toward more permissive cannabis regulation remains to be seen. The move Thursday to rescind the Justice Department’s so-called safe-harbor policy, however, is certain to spread anxiety throughout the multibillion-dollar pot industry.

In California, a spokesperson for the U.S. attorney in Sacramento said the office “will evaluate violations of [federal] laws in accordance with our district’s federal law enforcement priorities and resources.”

A spokesman for the U.S. attorney in San Francisco largely echoed that statement, adding that the office would work with “state, local, and federal law enforcement and allocate resources accordingly.”

The U.S. attorney’s office in San Diego went a step further, issuing a statement saying Sessions’ decision “returns trust and local control to federal prosecutors in each district when it comes to enforcing the Controlled Substances Act.”

Thom Mrozek, a spokesman for the U.S. attorney in Los Angeles, said he did not have any specific comment about whether the office would change its policy toward marijuana prosecutions.

Six states have legalized recreational use of marijuana: California, Oregon, Washington, Nevada, Colorado and Alaska. Voters in Maine and Massachusetts have also approved legalization measures, but they have not taken effect.

A much larger group, 29 states plus the District of Columbia, have legalized marijuana for medical purposes. The new Justice Department policy does not put medical marijuana at risk in the same way as recreational pot, at least for now.

A law passed by Congress strictly limits the federal government from interfering with medical marijuana sales. The 9th Circuit Court of Appeals, which has jurisdiction over federal cases in California and eight other Western states, has interpreted that law to bar any prosecutions in medical pot cases.

Sessions has sought to have that ban lifted, and Justice Department officials suggested their new policy could be extended to threaten medical pot, as well, if the law changes or if the 9th Circuit’s interpretation is overturned. They left unclear whether they might pursue prosecutions of medical pot in states outside the 9th Circuit’s jurisdiction.

One of the authors of the federal law, Rep. Dana Rohrabacher (R-Costa Mesa), said Thursday that Sessions “has just delivered an extravagant holiday gift to the drug cartels.”

“By attacking the will of the American people, who overwhelmingly favor marijuana legalization, Jeff Sessions has shown a preference for allowing all commerce in marijuana to take place in the black market, which will inevitably bring the spike in violence he mistakenly attributes to marijuana itself,” Rohrabacher said.

Justice Department officials said the policy reversal wouldn’t necessarily mean a rush of new marijuana prosecutions. But they made clear their intent was to end the safe harbor for the industry and to increase the level of unease for growers and dispensary owners — along with anyone who does business with them.

When asked whether the new policy could mean trouble for banks that deal with marijuana businesses, for example, a senior Justice Department official who briefed reporters on condition of anonymity said: “It’s clear … that certain banking activities that relate to marijuana are against federal law.”

“I can’t say where it will or won’t lead to more prosecutions,” the official said, referring to the new policy. “We believe that the U.S. attorneys’ offices should be opened up to bring all the cases that need to be brought.”

Hilary Bricken, an attorney who represents businesses in the marijuana industry, said that leaving the policy up to each U.S. attorney had eliminated any clarity on the law. As the industry braces for “varied and selective” enforcement, business owners would need to learn where their local U.S. attorney stands on marijuana issues, she said.

“Some of them are going to be drug warriors. Others are not going to be concerned with this,” Bricken said.

The picture will be even more complicated in some areas because President Trump has not yet nominated U.S. attorneys in many districts. So far, 46 U.S. attorneys have been nominated and confirmed, meaning that about half the offices nationwide are led by interim appointees.

One leading Republican senator threatened Thursday that confirmation of future nominees will be at risk if Sessions persists in his anti-marijuana effort.

“What happened today was a trampling of Colorado’s rights, its voters,” Sen. Cory Gardner (R-Colo.) said in a Senate floor speech in which he angrily accused Sessions of going back on commitments to respect the will of voters in states that have chosen to legalize.

“I will be putting today a hold on every single nomination from the Department of Justice until Atty. Gen. Jeff Sessions lives up to the commitment he made to me,” said Gardner, a member of the Senate’s Republican leadership.

The top federal prosecutor in his state, U.S. Atty. Bob Troyer, said Thursday that his office wouldn’t be changing its approach to pot cases. He would continue to focus on “identifying and prosecuting those who create the greatest safety threats to our communities around the state,” Troyer said.

The Obama administration put its policy in place in response to the legalization of recreational marijuana in Colorado and Washington state. Those rules prevented federal prosecutors from targeting marijuana businesses operating legally under state law and allowed the recreational cannabis trade to bloom in the states where voters have legalized.

that a crackdown was coming, but pro-marijuana lawmakers and regulators had responded with defiance, declaring that legalization was so far along that there was little the Department of Justice could do to stop it.

His anti-pot crusade, however, has been at odds with the president’s more laissez-faire stance. Trump said unequivocally during his presidential campaign that he opposes a crackdown on recreational marijuana, saying the issue of legalization should be left to individual states.

Gardner posted on social media Thursday the segment of a news interview in which Trump said as much.

The difference in positions raises the question of whether the White House will back the Justice Department if federal marijuana prosecutions ramp up dramatically.

Marijuana legalization is more popular than it has ever been, with a recent Gallup poll finding it is favored by 64% of Americans. It has majority support across party lines, even among Republicans for the first time ever, the polling indicates.

Yet the announcement by Sessions puts the fledgling marijuana industry in a defensive crouch. Marijuana businesses were already struggling to navigate untested state regulations and the challenge of finding insurance and banking businesses willing to risk working with them.

“While dismantling the industry will prove impossible, the move by Sessions will create more uncertainty in an industry that already has its fair share of risks and unknowns,” said Chris Walsh, vice president of Marijuana Business Daily. “We certainly could see some types of regional crackdowns.”

Groups that oppose legalization agreed that the Justice Department was unlikely to shut down the commercial pot trade. But they welcomed the prospect of creating new problems for it.

Kevin A. Sabet, head of the anti-legalization group SmartApproaches to Marijuana, expressed hope the policy change “will slow down the rise of Big Marijuana and stop the massive infusion of money going to fund pot candies, cookies, ice creams, and other kid-friendly pot edibles. Investor, banker, funder beware.”

Civil rights groups had a different take. The ACLU warned that federal prosecutions “will have a disproportionate and disastrous impact on people of color,” who use pot at similar rates than whites, but have historically been far more likely to be prosecuted for it.

Sarah Armstrong, director of industry affairs for Americans for Safe Access, which advocates for legal access to cannabis for therapeutic use and research, said the Justice Department announcement was “really very upsetting and scary for patients who don’t know, when they walk in the door, if there’s going to be a raid.”

Even a crackdown solely on recreational marijuana could jeopardize medical users, Armstrong said, because many dispensaries will be serving both patients and recreational users.

The 2013 policy which Sessions will rescind is known as the “Cole memorandum,” named after former deputy attorney general James Cole. It had provided clarity not just to marijuana businesses and users, but also to state and local law enforcement agencies, which now could find themselves working at cross purposes with their federal counterparts.