When debris flowed, Montecito families had little chance to flee 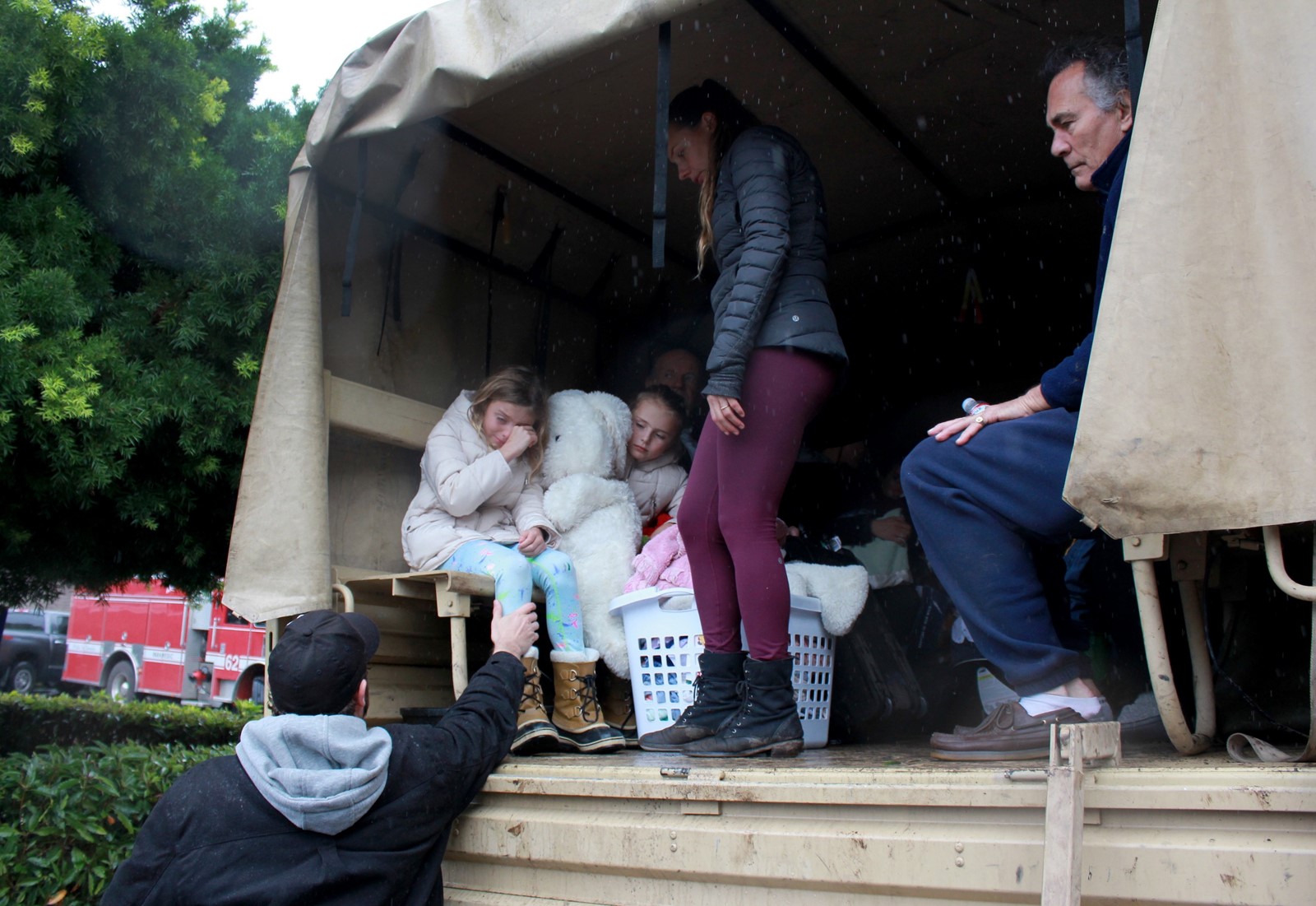 CHERYL STREATFEILD and daughters Sterling and Ruby, 9 and 8, are comforted by Tim Green during an evacuation on Tuesday in Montecito. Last week’s storm sent deadly torrents of debris through the coastal community, quickly reducing many homes to rubble. (Sky Gilbar For The Times) 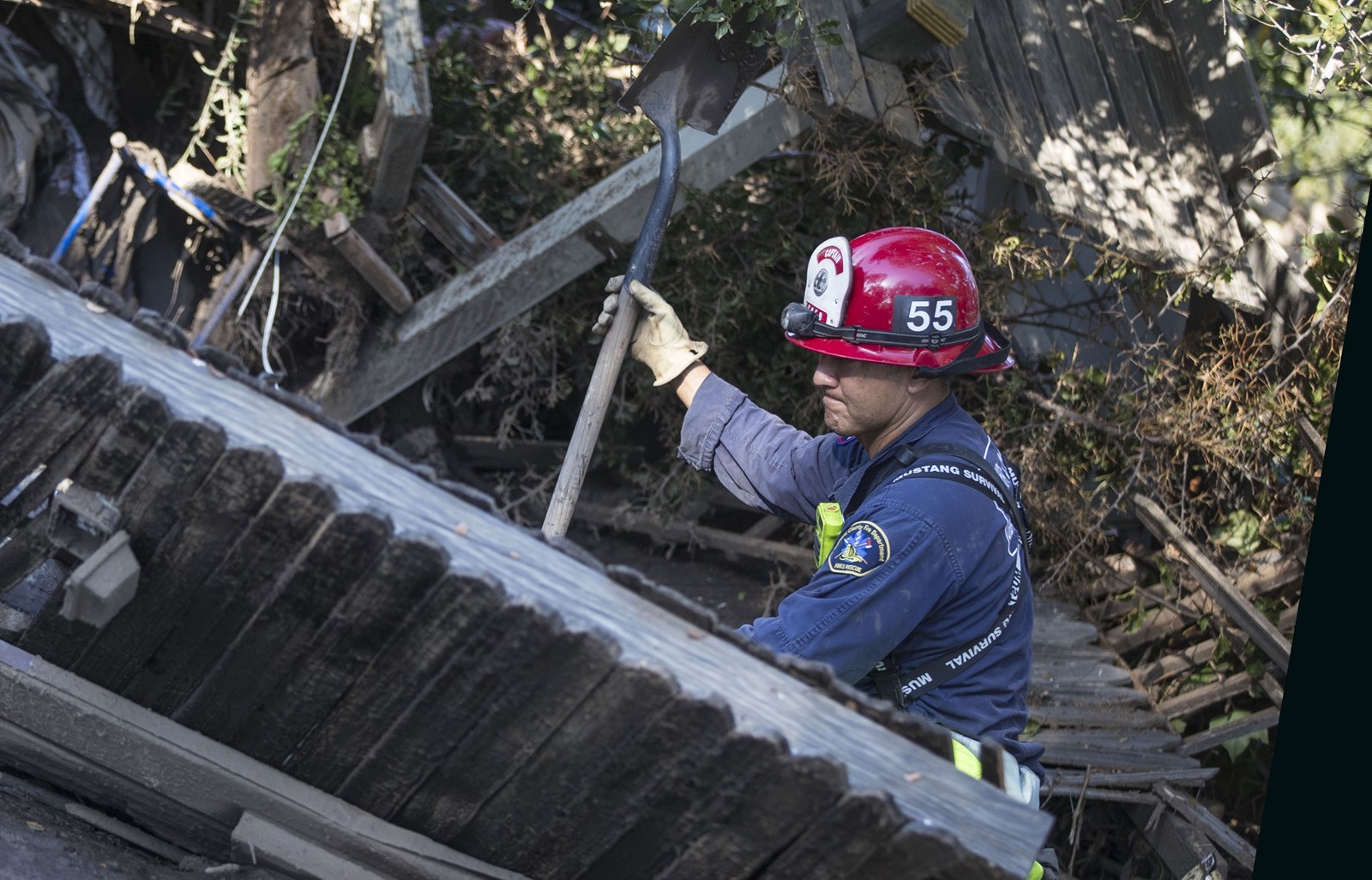 The realization that houses might simply vanish didn’t start to set in until a 30-foot tree trunk barreled by.

Trina Grokenberger stared out the upstairs window of her white Colonial house Tuesday morning, as a river raged through her front yard.

“Dave!” she called to her husband. “We can’t leave now, right? That’s all trees coming down the driveway.”

Their white Land Rover was parked below, with the suitcase they had packed.

They knew they were in a voluntary evacuation zone and that officials had warned of possible flooding and debris flows. In December they left for five days under a mandatory evacuation during the Thomas fire. Now the word “voluntary” had given them a false sense of comfort.

They lived on a low slope, just a half mile from the freeway — far from the steep mountain canyons where they expected the real damage to occur.

Monday night, a storm pushed into the Santa Ynez range above Montecito on the slopes burned bare just last month.

By 2 a.m., disaster was unfolding with astounding intensity and speed. Rainwater poured down canyons, picking up ash, dirt, sticks and rocks. The debris ruptured a gas main. Fire lit the sky orange.

At 3:38 a.m., the storm unleashed its rain on the mountainside, dropping a half-inch in five minutes that drenched miles of precipitous terrain before draining into four creeks that cross Montecito to the ocean. The burned and waxy soil had no time to absorb the rainwater.

Boulders crushed cars. Mud and logs tore houses apart as if they were made of dust.

It was now in no mood to meander, no mood to abide by any efforts humans had employed to claim control — debris basins, channel walls, culverts, sandbags, emergency alerts and, particularly lethal, the distinction between “mandatory” and “voluntary” evacuation zones.

At his home, 60 feet above the creek, Jeff Bermant woke to windows rattling and his bed shaking.

The shaking stopped and started; it was not the same rhythm as an earthquake. He looked out his window and noticed the rain and the orange glow of a fire in the distance.

Four of his friends would die before daybreak.

At 4 a.m., roiling walls of detritus were racing down all four creeks.

A few hundred feet above the Grokenberger house on Hot Springs Road, Montecito Creek didn’t make the east turn it was supposed to at the channel to go under the little bridge. It pushed straight through the neighborhood.

From upstairs, the Grokenbergers’ son, 27-year-old Billy, heard a crash below.

He had been videotaping the destruction from a window and continued filming as he walked down the stairs. Blackish mud four feet deep covered the bottom floor. The mud had come through the back and pushed out the front door, jambs and all. Outside, the river roared past, glowing orange under the light of the distant fire.

The home of their next-door neighbors to the north, the Cantins, was gone.

Behind them, their close friends John McManigal and his son Connor woke up to noise. The only ones home, they stood next to each other as their house twisted, the roof opened up and the floor gave way. They clung to each other underwater, until the current ripped them apart.

Other people were caught by the water also — sucked under the current, bashed by rocks, snagged in giant root balls of trees.

Many were swept into San Ysidro Creek, a little over a mile to the northeast. The mudflow buried homes up to their eaves, packed the insides of some with timber and rocks, obliterated others.

Josie Gower had stacked two rows of sandbags around her home on East Valley Road, in the voluntary evacuation zone. The 69-year-old had an adventurous streak. She was a world traveler who met her ex-husband, a farmer from New Zealand, on a trip to the South Pacific. Having survived the Thomas fire last month made the predictions of this storm seem benign by comparison.

But the rain was heavy enough that she woke up at 3 and watched it with her boyfriend, Norm Borgatello. They stepped out the front door to look, her family described later, and a cold sludge of gravel and mud and boulders picked them up.

She tried to hold onto the door frame, but the force was overwhelming.

He was thrown against a fence and pinned there, buried in mud up to his neck. She was swept away.

“Josie!” he called out, over the roaring river. “Josie!”

With the forecasted heavy rain, and the vast denuded slopes above, the Montecito Fire Protection District had prepared for major flooding. Backup units from across the state were called in. Teams of firefighters were placed across town and some patrolled the streets.

As the creeks overran streets and bridges, some crews suddenly found themselves cut off from places where they were needed.

Many units were staged down the hill along Coast Village Road, near Highway 101, because it was easier to gain access from below than trying to cross the creeks higher up.

Capt. Adam Estabrook and his Santa Barbara County Fire Department crew headed up to the hard hit area along Montecito Creek. They knew a way to come at it from above, to avoid the mud.

They parked the engines on a high spot of Hot Springs Road, before it dipped 30 feet down into the mud. The only house standing was the white Colonial.

Inside, Billy Grokenberger was taking his last video of the ordeal. It was now 4:16 a.m. The giant oaks that shielded their home from the road were gone, as were their three cars. Boulders lay on a shoal of mud that amassed against their home.

Estabrook could not believe what he was seeing. The creek was almost 200 yards wide. He and his crew could hear cries for help in the blackness.

They trudged through mud, not thinking about the hidden swimming pools and manholes that could suck them under. A power pole had snapped, and downed wires crossed the mud to another pole that was leaning dangerously over the road.

As they swept their flashlights over the terrain, they could hear moans. They followed the eerie sound until flashlights caught a glimpse of a man’s head. He was barely holding onto a rock, as the current threatened to sweep him away.

He was covered in so much mud, “you couldn’t even really tell it was a human being,” Estabrook recalled. They lifted him out of the water and walked him to higher ground.

Suddenly, they realized the catastrophe that was building. Adrenaline surged as they prepared for a mass rescue operation.

The man told them that his wife, his children and his parents were in the house with him when it got washed away. All the firefighters could do was search on foot and call out, hoping to hear responses in the din.

No ambulances or equipment could get down in that draw.

Billy Grokenberger slogged through the mud on the first floor. He could see the firefighters through the wall that had been stripped of everything but the studs. He waded outside and shone his flashlight at them so they could see him.

The rescuers got to him and guided the family and their dog to high ground. The three houses surrounding them had disappeared.

Grokenberger could only hope that their neighbors had evacuated or were on vacation. The people to the south, the Mitchells, were elderly.

By this time, more equipment was getting in and ambulances arrived to take people to the hospital.

Firefighters began to poke through massive piles of debris that had stacked against standing trees and exposed roots, searching for victims who might have been trapped.

About 200 yards downstream from the Grokenbergers’ house, Montecito firefighters spotted their next-door neighbor, Kim Cantin, on a tangled mound of wood.

Cantin, 51, had multiple injuries, including a fractured hip. Her husband and two children were missing, she said. They removed her from the pile and put her in an ambulance.

As the sun started to rise, a little before 7 a.m., Estabrook and other firefighters were walking by another pile of debris nearby when they heard a slight gasp.

“Did you hear that?” someone said.

They pulled her out, laid her down, cleared her airway and nose and carried her to a fire engine. She was breathing.

On the other side of the creek, rescuers came up against a nightmare. Under downed power lines, a crumpled mess of cars, logs, branches, a refrigerator, a chunk of house and mud had hung up against a tree — next to a broken gas main.

The escaping gas roared like a jet engine, piercing their ears.

Montecito Fire Capt. Ben Hauser and Andy Rupp, one of his crew, made their way around it. The cars were empty.

Then Hauser heard a faint cry.

“I think I hear somebody!” Hauser yelled.

They put their ears to the pile.

A faint voice called back.

Rupp climbed up the 15-foot pile, staying clear of the wires. He put his ear to the pile.

She screamed but Rupp could barely hear her. She was not hurt badly, she said, and she was alone.

He stuck his head in a hollow space by a piece of roof and shone his flashlight.

“Can you see my flashlight now?” he asked.

He spotlighted different areas until she said she saw the light.

He guessed that she was directly underneath where he stood. Rupp started plucking out sticks and small pieces of wood.

He grabbed a twig, and she yelped, “Ow.” Rupp was confused.

“You pulled my hair,” she said.

He reached down and saw strands of hair on a round surface. He pushed on it.

“Is this your head?”

The girl was squatting, bent over with her chest at her knees, lodged between roof beams. As they spoke to her, they realized she was Lauren Cantin, 14, the daughter of the woman with the fractured hip.

She was all but entombed in debris. It was going to take hours to remove her. They couldn’t use power tools for fear of igniting that fuel. Even a hand saw could cause a spark.

By now they were getting reports of a second rainstorm coming fast. They were in the middle of its path. Though Hauser feared the rescue would put dozens of firefighters in danger, he called for help.

An hour later, the gas leak stopped. They got out the power tools. They considered a chain saw, but the mud and rocks would wear the teeth to nothing. They pulled out a hydraulic cutter capable of slicing through wood, metal, rock, dirt.

Rupp held the girl’s hand. Mud covered her eyes, face and hair. She kept saying how cold she was. She asked about her family.

They freed her around 8 a.m.

They didn’t know her father, David, had died.

In just a few hours, the flooding destroyed 65 homes over 30 square miles and damaged 462. At least 19 bodies had been recovered by Saturday.

On San Ysidro Creek, Gower’s boyfriend, Borgatello, called her name for hours. Firefighters found her body about a mile downstream, identifiable only by fingerprints.

Neighbors on all sides of the Grokenberger house died.

Next door to the south, James and Alice Mitchell, 89 and 78, respectively, never made it out of the flood.

McManigal, 61, a husband and father of six boys he doted on, died in the storm.

His son Connor was found a half mile from their house, on the flooded Highway 101.

He is recovering in a hospital.