Many travel without adults on violent journeys 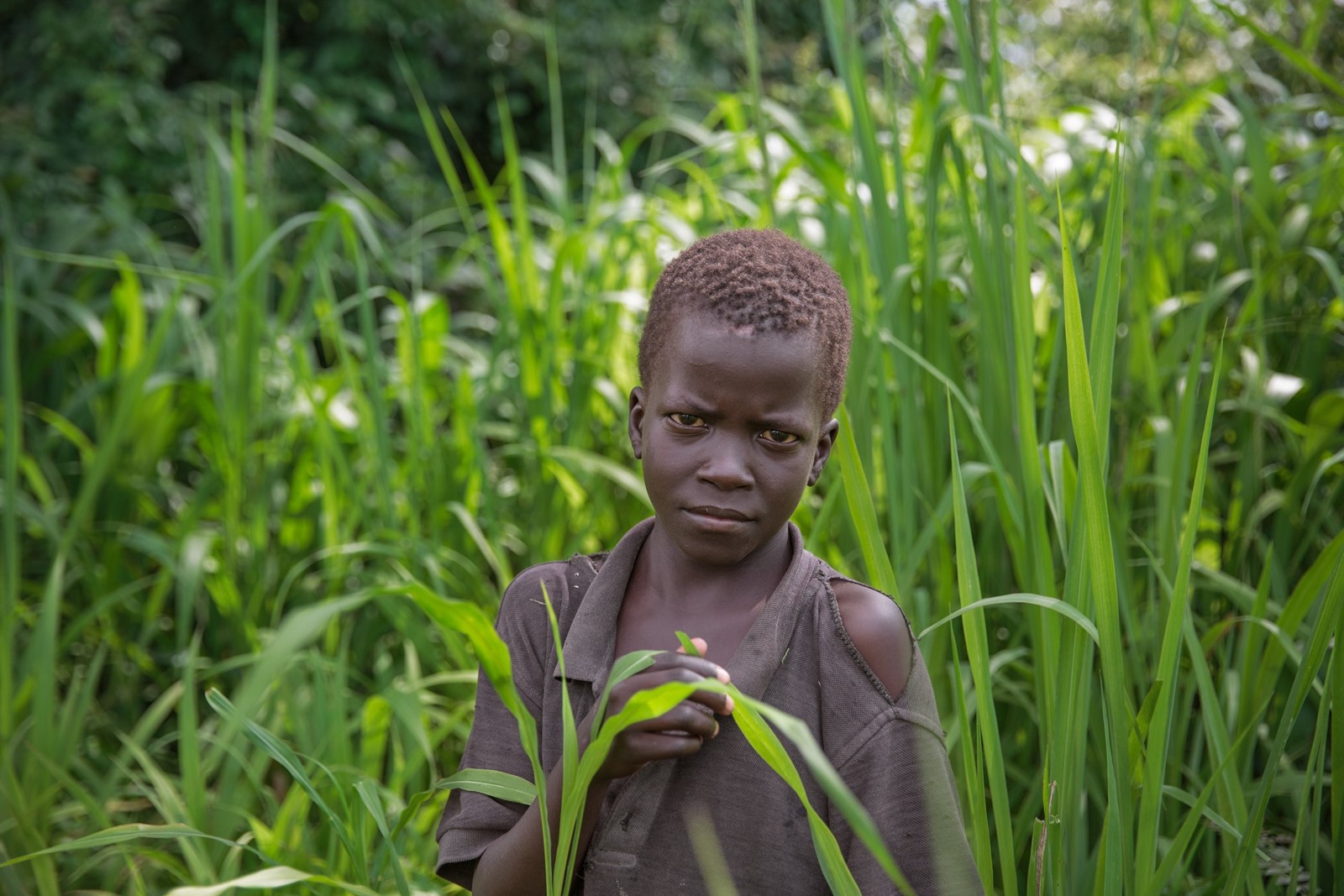 OBEDE LUTANA arrived at the Imvepi camp in Uganda with no family after soldiers killed his father in South Sudan and his cousin abandoned him. (Sara Hylton For The Times)
PREVIOUS IMAGE

Obede Lutana lost both his parents amid South Sudan’s increasingly vicious civil war — his father shot to death by soldiers last year on the family’s farm near Yei, his mother succumbing to an outbreak of disease.

Obede was left to live with his cousin, a young woman who cared for him as the chaos escalated around them on all sides. She stayed with him for nearly seven months.

Then one day when Obede briefly left the house, his cousin placed a pot of food on the stove and slipped out the door.

“She cooked food and left without saying goodbye,” said Obede, who gives his age as 15 but looks younger. “I’d just gone a little way from home,” he said. “I thought she’d take me with her.”

Many children like Obede have been arriving here in recent weeks, navigating a rickety bridge that marks the border between South Sudan and Uganda. Most often, they are dusty and painfully thin. Many seem numb and withdrawn, unwilling or unable to describe what occurred on their lonely journeys.

South Sudan fought a 22-year civil war for independence from Sudan, leaving much of the country shattered. The Sudanese People’s Liberation Movement took power at independence in 2011, but its army fractured along ethnic lines 18 months later when President Salva Kiir, a Dinka, faced a leadership rival in his deputy, Riek Machar, a Nuer. Last year the war spread, drawing in other ethnic groups in western and southern South Sudan.

Both sides have been guilty of war crimes, according to rights groups, though the majority appear to have been carried out by Kiir’s forces, which have attacked farmers, shopkeepers, market traders and fleeing women. Entire villages have emptied.

The fighting has forced nearly a third of the country’s 12 million people to flee their homes, resulting in Africa’s biggest refugee crisis since the Rwandan genocide in 1994.

Life was hardly good for South Sudan’s children even before the war. The government plows more than half its finances into the army, weapons, security and administration, leaving little for anything else.

Even before the fighting, children on average received less than five years of schooling, and more than half the population lived below the poverty line.

Now things have gotten worse. Since the war restarted, oil production has declined sharply, the economy has collapsed and inflation is running at more than 900%.

Of the more than a million people who have fled to refugee camps in Uganda, 61% are children. The numbers of children traveling alone, or with no one but other children, are staggering: up to 36,000, officials estimate.

Few had much food along the way. Some were raped. Some tagged along with adults, only to see soldiers kill the people who were leading them to safety.

Some children witnessed parents or siblings killed in attacks or saw their parents die in the bush.

In Obede’s case, soldiers attacked the village in August 2016, forcing Obede and his father to flee into the bush. But there was no food. Desperate, his father crept back to the family’s small plot of farmland to pick some corn.

“He ran into some government soldiers and he was shot,” Obede said. “Later, I saw his body in the middle of the farm.”

Helena Sitima’s father died of illness when she was a baby. In November, the girl was digging with her mother in the family’s small farm plot some distance from their house near the village of Payawa when government soldiers arrived. Helena’s mother, who had a knee problem, moved slowly.

“When I saw them, I started running. My mother could not run and the soldiers opened fire and they shot my mother there. I heard bullets behind me.” Helena,11, ran back to the house where her teenage sisters were watching two small brothers. All of them fled to the bush carrying a few cooking utensils and water cans.

At sunset, the three sisters left their brothers in the bush, told them to be quiet, and crept back to the small hut where they took cassava flour and water.

“The next day, a neighbor went and got my mother’s body and brought it into the bush. We buried her there. People started crying. I cried too. I cried all day.”

The sisters stayed in the bush for a week trying to look after their brothers, but besides the flourthere was no food. Eventually, they made their way with a neighbor to Uganda, where Helena’s uncle and siblings were routed to a different camp.

Helena shares a tent with her former neighbor, Jennifer Sadiya, 25, and Sadiya’s baby. Outside, children play with a small ball made of string and plastic bags. Another group sits playing cards. In the mornings and evenings, girls take their yellow plastic jerrycans to the well.

Nelson Moi, a farmer, is caring for two orphaned grandchildren.

His son, a shopkeeper, was shot by soldiers in Yei in October 2016. When soldiers attacked his village of Moga in December, Moi fled with his blind wife and his widowed daughter-in-law, Mary Jokuda, 23, and her 8-year-old son, Benson Yakani. He also brought another orphaned granddaughter, Margaret Poni, 11, whose mother had died nine years ago. Moi and the family lived in the bush for two months with no food except bitter wild roots.

But Mary Jokuda fell ill with a fever. The family tried to save her, picking wild roots to make medicine, but she worsened. After two weeks she died.

“Now I have a problem. I don’t have anything to support my grandchildren,” Moi said. “I have tuberculosis and I am asthmatic. Just moving is hard.”

How children ended up traveling alone through some of the most violent war corridors in Africa is a question with no single answer.

Some children were in school when attacks happened, fled into the bush and had to make their own way to Uganda, sometimes taking groups of younger children with them.

“By the time they reach the border point, most of them tell us this is the first meal they have had for days or weeks on their journey to Uganda,” said James Kamira, World Vision child protection officer in Uganda. “They say, we have walked 10 or 15 days or close to a month, but this is the first meal we are getting.”

One 15-year-old girl gave birth in the bush on the way to Uganda and nearly died of hunger, he said. Another 15-year-old girl, walking with her 6-year-old sister, was raped by an armed group in front of the child, according to Kamira. Later she was accosted by more armed men and raped again.

“When they get to the border, they’re numb. Most of them have witnessed their parents or other people or children being killed on the way,” he said. “They have a sense of fear of the unknown and they have high levels of stress. They have no trust.”

Sixty-four percent of children in the camps are not in school, according to the United Nations. Helena Sitima does go to school and tries to please her foster mother. But she misses her family, especially her mother.

“When I go to bed at night, I remember them and I feel lonely and sometimes I cry. I remember my mom and I think about her, because she loved us,” she said.

When unaccompanied children from South Sudan arrive in Uganda, they are interviewed by government officials, given a number and a small portion of biscuits, which they usually eat immediately.

In the camps, malaria and diarrhea are the biggest killers of children. In the Bidi Bidi refugee camp, members of one family buried their 2-week-old baby next to the wall of their hut.

Others are buried in the graveyard at the edge of the camp, where the plots bear no names but are marked with small piles of rocks, or a makeshift cross, or in one case, a pair of small black sandals. Some are little more than dirt mounds melting away in the rains, increasingly difficult to see.