After a decade of military-led battle with cartels, an uptick in violence raises questions about strategy 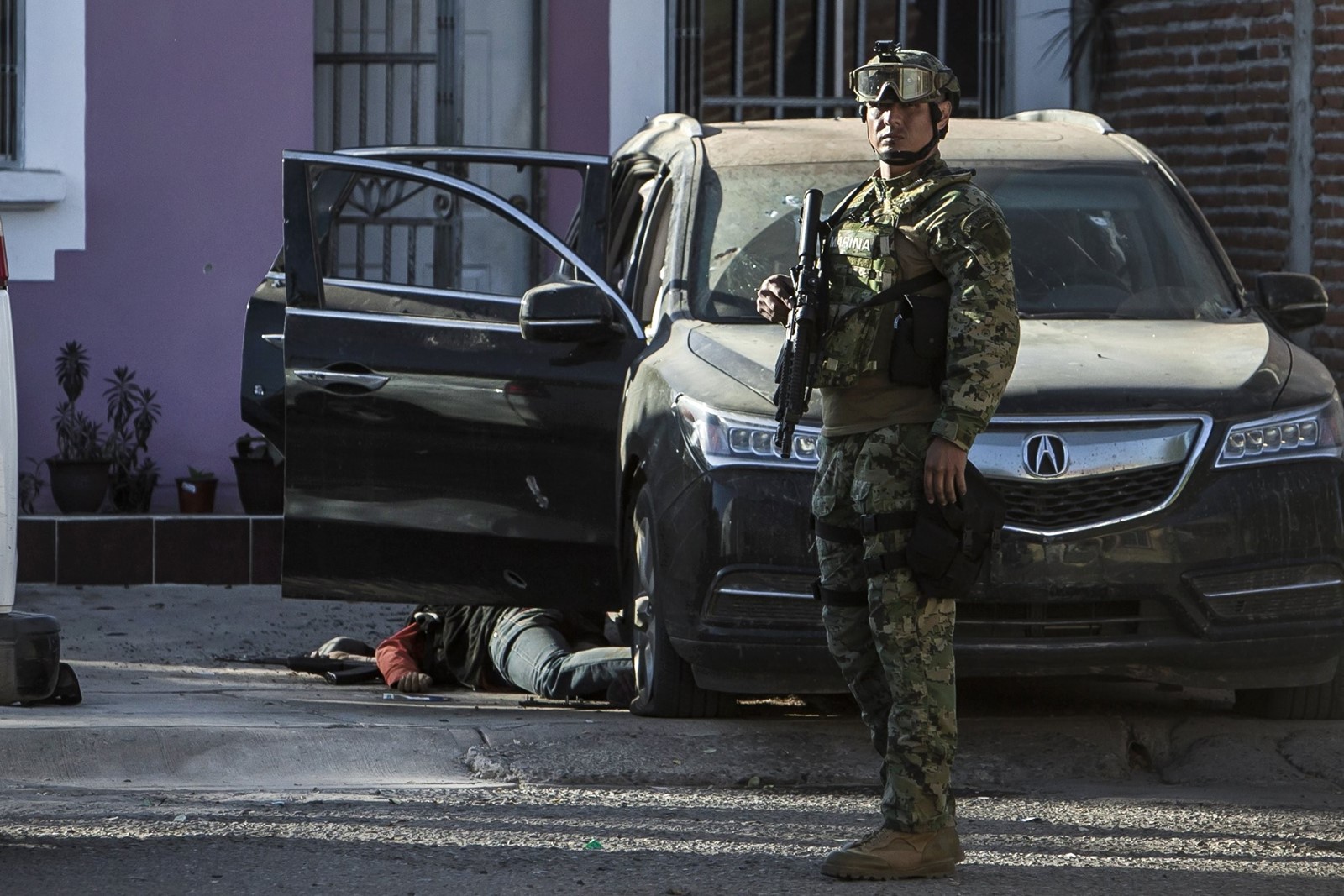 The bodies of nine men and two women turned up one morning this week on the outskirts of Veracruz, a major port city on Mexico’s Gulf coast. Nude or partially clothed and bound at the ankles, the corpses showed the scars of torture and were accompanied by a sign: “You want a war, you’ll get a war.”

Authorities have not said whether they believe the bloodied bodies discovered Tuesday night were a warning from one drug cartel to another, or a taunt aimed at the Mexican government, which the same day had announced it was sending more federal troops to the state of Veracruz to combat a recent increase in killings there.

One thing is clear, however. More than a decade after then-President Felipe Calderon launched a crusade against drug cartels — dispatching tens of thousands of soldiers onto local streets to battle gangs — a drug war still rages, and the murder rate is once again rising rapidly.

This year has seen an unprecedented uptick in violence, with federal statistics showing nearly 2,000 people killed in the first month of 2017 — more than in any January since federal officials began releasing crime data in the 1990s.

The Mexican government does not distinguish which deaths were tied to the cartels, but some crime experts have estimated that narco-violence could account for up to half of the overall numbers.

The surge in homicides has called into question Mexico’s military-led drug war strategy, as well as the United States’ prominent role in the fight.

Since 2008, the U.S. government has appropriated more than $2.6 billion for the Merida Initiative, a partnership with the Mexican government aimed at disrupting organized crime and reforming Mexico’s ailing police and justice systems.

Under the program, which was based on the principle that the illicit drug trade is a shared problem in need of a shared solution, the U.S. has sent Mexico more than half a billion dollars in new planes, helicopters and drug-sniffing dogs and has trained law enforcement in fields including firearms and forensics.

That support now appears to be in jeopardy, as President Trump seeks to slash foreign aid in order to increase U.S. military spending and looks for creative ways to pay for construction of a border wall.

Mexican leaders, who have bristled at Trump’s boast that Mexico will pay to build the wall, have indicated that they are willing to live without U.S. aid, which represents a sliver of Mexico’s total security budget.

Last week, Mexican Interior Secretary Miguel Angel Osorio Chong told a local journalist that the aid is “not very significant,” and said, “We really do not have any problems with its withdrawal.” In the 10 years since the U.S. and Mexico began the Merida Initiative, he said, “Mexico has changed, grown, is more developed and stronger.”

But the homicide rates portray a country still embroiled in an endless fight against organized crime that has left more than 175,000 people dead over the last 10 years.

Mexico first deployed soldiers, marines and federal police officers against increasingly powerful cartels because local and state police forces were viewed as too weak to do it themselves. In some cases, cartels had infiltrated police forces, with mayors and other officials in collusion, too.

The federal forces executed a “kingpin strategy” that targeted the cartel leaders, and one by one, powerful drug lords, including Joaquin “El Chapo” Guzman, were taken into custody or killed.

While many security analysts agree that federal forces helped stop Mexico from becoming a narco state, the strategy also unwittingly unleashed a wave of violence as would-be kingpins fought for control of the cartels.

In 2011, the most violent year in modern Mexico’s history, 22,852 people were killed. Mexican officials sought to assuage concerns about the bloodshed, saying most of the victims were gangsters.

The homicide rate began to dip after that, dropping to 14,353 in 2014. Officials including Osorio Chong and President Enrique Peña Nieto heralded the statistics, saying they showed the tide shifting in the government’s favor.

But if the new uptick in killings holds steady, 2017 could be the deadliest year since the drug war began.

Osorio Chong has blamed the increase on elections last summer that unsettled the status quo when new governors took office in a dozen states, but an analysis of statistics show an escalation of killings nationwide.

Murders rose in 25 out of Mexico’s 31 states in January compared with the same month last year, with the worst violence concentrated in Guerrero, Baja California Sur and Colima.

Colima, a state of just 700,000 people along a strategic drug route on the Pacific coast, had a murder rate of 116 per 100,000 people in January. That included the dozen bodies, some of them headless, that were discovered in one weekend in the seaside resort of Manzanillo.

The city of Veracruz, where the 11 bodies were discovered Wednesday, also has been beset by violence, as the Zetas cartel battles for turf with the Jalisco New Generation cartel, which rose to prominence several years ago amid a power vacuum created when the Mexican government killed a leader of the Sinaloa cartel.

“ ‘Decapitating’ criminal organizations has been shown, again and again, to exacerbate the violence,” said law professor Catalina Perez Correa, citing a recent study that found that public shootouts involving the military increase the number of homicides in that municipality in both the short and long term.

“Death and violence, perpetuated by criminal groups or by the state, have become part of our daily lives,” Perez lamented in a recent column in El Universal newspaper.

The violence has become so normalized, most killings don’t make headlines, said Perez, of Mexico’s Center for Research and Teaching Economics. Even as the murders rise, there is little outrage among the Mexican public, she said.

Perez and others have sought to draw attention to a series of laws being considered by federal legislators that would extend the power of federal troops inside Mexico. One proposal would allow soldiers to take over local investigations when local police are deemed unfit to handle them.

The laws, which have been proposed by members of Peña Nieto’s Institutional Revolutionary Party, as well as members of the right-leaning National Action Party, are opposed by by many human rights activists. They say the military does not have the constitutional right to enforce public safety within Mexico, and point to a surge in rights abuses since the military’s involvement in the drug war, including the alleged military execution of 22 suspected gang members in the town of Tlatlaya in 2015.

“There have been documented cases of soldiers being involved in torture, extrajudicial killings, disappearances and many other human rights abuses,” said Maureen Meyer, who advocates for human rights in Mexico with the nonprofit Washington Office on Latin America.

But the worst damage, Meyer said, may be to the long-term effectiveness of Mexico’s local law enforcement agencies.

Enlisting soldiers to fight gangs at the local level “reduces the pressure on police and others to improve,” Meyer said.

Jorge Chabat, a security expert at the Center for Research and Teaching Economics, said Mexico doesn’t need more soldiers or more equipment but the rule of law, including a complete reform of its police and justice system.

The Merida Initiative includes money for such work — the U.S. has helped fund updates to Mexico’s courts system that have been widely praised — but more improvement is needed, he said.

“This is not a software problem, this is a hardware problem,” Chabat said. “The government launched security operations, but they didn’t do the other part of the job — reforming institutions in a proper way and combating corruption. If you don’t fix the state institutions, there is no security strategy that is going to work.”