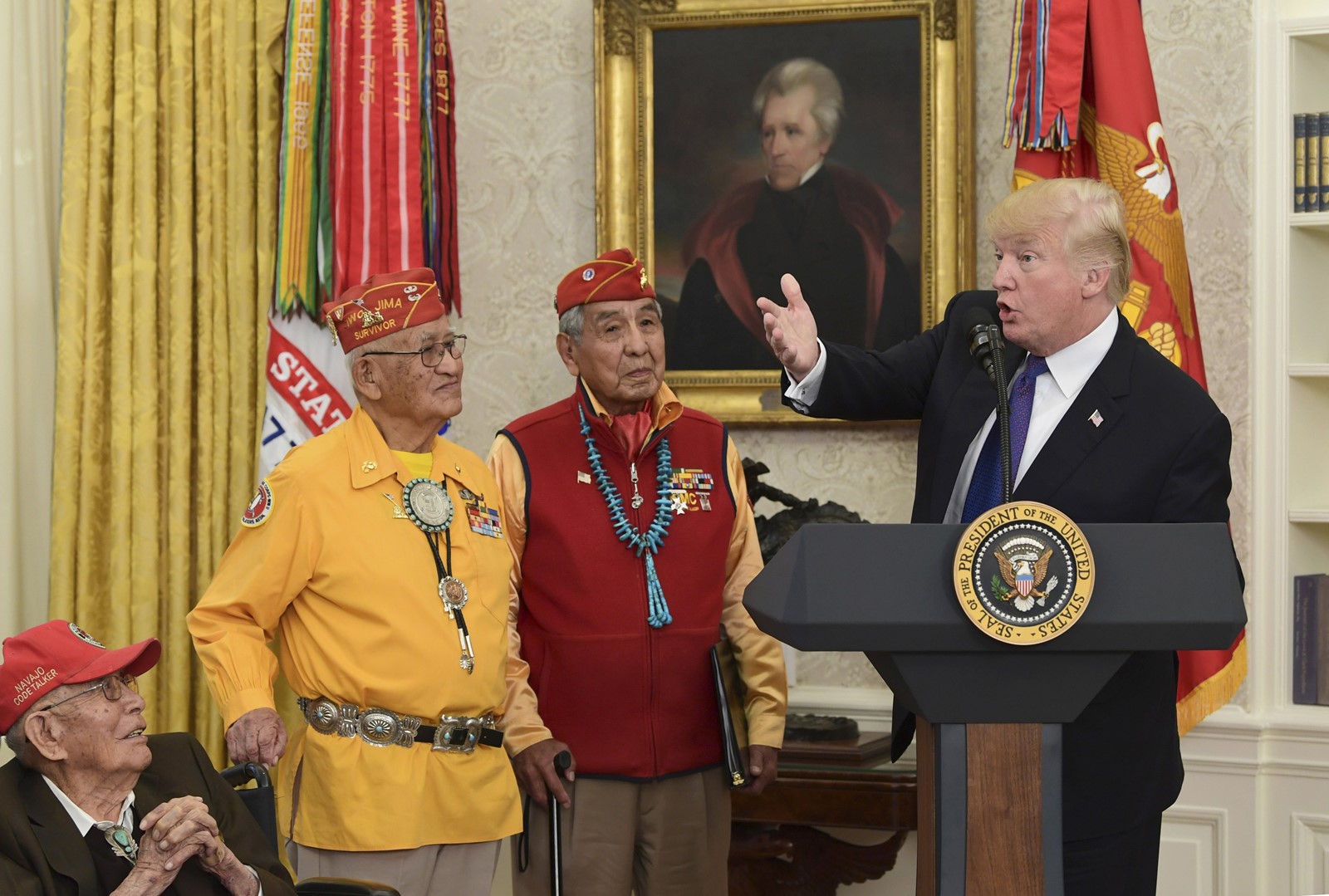 PRESIDENT TRUMP’S “Pocahontas” insult wasn’t the only thing that bothered many on Monday: He also stood by a portrait of “Indian killer” Andrew Jackson. (Susan Walsh Associated Press)
PREVIOUS IMAGE

When President Trump called Democratic Sen. Elizabeth Warren “Pocahontas” this week during a ceremony honoring Navajo war veterans, he didn’t just ignite a controversy over whether he used a racial slur against an opponent.

Trump also reopened a broader conversation about the federal government’s uneasy relationship with, and abusive treatment of, Native Americans. It’s a history that included mass killings and efforts to strip tribes of their land, language and culture. More recently conflicts have shifted to cultural and legal fights over property rights, mascots and casinos.

“Trump is not alone in making insensitive comments or doing insensitive or downright horrible things that hurt American Indians,” said the Rev. John Norwood, general secretary of the Alliance of Colonial Era Tribes. “There is a growing awareness of the history of indigenous Americans, but the insensitivity toward them still is incredibly prevalent.”

Norwood added that Native American groups hadn’t always been on the losing end, especially in recent years in legal battles and cultural protests they have waged. “But unlike all other Americans, we are not immigrants, and yet we feel it’s often an uphill fight for us in our own land.”

White House Press Secretary Sarah Huckabee Sanders said it was “ridiculous” to think the president meant to insult anybody but the Massachusetts senator. But Warren — who says she has Cherokee heritage — and groups including the National Congress of American Indians and the Alliance of Colonial Era Tribes doubled down on critiques of the president.

Native American representatives said the back-and-forth over Trump’s words stung especially because they were part of a long history of actions by the U.S. government and political officials that have continued to hit a nerve.

After Trump honored a small group of Navajo men Monday at the White House for their work as code talkers with the U.S. Marines during World War II, Native American groups noted that he did it as he stood in front of a painting of President Andrew Jackson.

Jackson, who was president from 1829 to 1837, is known for signing the Indian Removal Act, which forced more than 60,000 Native Americans to relocate from their homelands in the Southeast to areas west of the Mississippi River. Cherokees, who were among those who endured what was called the Trail of Tears, called Jackson the “Indian killer.”

Thomas Begay, a code talker who stood by Trump as the president gave thanks for his service, a CNN contributor that the painting “puzzled” him but did not offend him.

For decades, many Native American tribes have campaigned against team mascots that use tribal names and imagery. And fans of the Atlanta Braves, Florida State University Seminoles and Kansas City Chiefs famously celebrate scores and wins by waving their arms in a “tomahawk chop.”

“There are exceptions where individual tribes have no issue with a local team, but by and large most tribes decry American Indian mascots to be psychologically damaging to American Indians,” Norwood said.

Perhaps the most controversial sporting team in this category is the Washington Redskins. Owner says he will never change the name, which he describes as imbued with the history of “who we are” and “where we came from.”

The federal government got involved when it was asked to deny trademark rights to the Redskins and others using Native imagery. Those challenges largely went nowhere in the past. But the government handed a symbolic win to tribal activists in 2014, when the U.S. Patent and Trademark Office denied the team’s trademark registrations because they were “disparaging to Native Americans.”

The victory may be short-lived. That’s because the Slants, an Asian American band that was also denied a trademark for having an offensive name, this year over the issue. Justices said that denying registration simply because people took offense went against the 1st Amendment.

Trump’s ongoing feud with Warren — he’s called her “Pocahontas” many times — isn’t the only spat with Native Americans that has caused him trouble.

Trump repeatedly clashed with tribes after a 1988 federal law made it easier for casinos to open on tribal land. In interviews and ads at the time, he painted tribes as being run by criminals and mobsters who — like he says now about Warren — misrepresented their backgrounds.

“I think I might have more Indian blood than a lot of the so-called Indians that are trying to open up the reservations,” Trump said in 1993 during an interview with radio host Don Imus.

Speaking at a Native American Affairs Committee congressional hearing that year, Trump also questioned why tribes received special status in the casino business. “If you look, if you look at some of the reservations that you’ve approved … they don’t look like Indians to me,” Trump said at the time to Rep. George Miller, a California Democrat.

The viewpoint isn’t unique to Trump. As tribal casinos have spread, they have frequently run up against protests from more established gaming companies. Just two years ago, MGM sued the state of Connecticut over a law that let tribes, but not nontribal companies, compete to build a casino adjacent to a reservation. MGM called the law unfair.

Throughout 2016 and 2017, thousands of Native Americans from across the U.S. descended upon North Dakota to camp out for months in protest against efforts to build a crude-oil pipeline that would transport 500,000 barrels daily from the western part of the state to another pipeline in Patoka, Ill.

The Standing Rock Sioux and the Cheyenne River Sioux said the Dakota Access pipeline would threaten their way of life as well as the water and land they had depended on for generations.

It was another chapter in a centuries-long tussle between the U.S. government and Native American groups over land rights, one that federal authorities frequently win. The groups behind the pipeline said they had received permission from local jurisdictions and the federal government to build, and said they would do it safely.

In the last month of his presidency, President Obama signaled that he understood the concerns of tribes and environmental activists. “My view is that there is a way for us to accommodate sacred lands of Native Americans,” he said in an interview with , adding that the U.S. Army Corps of Engineers was looking for alternate routes.

But shortly after the inauguration this year, the Trump administration gave final approval for construction. During the campaign and his presidency, Trump has said domestic energy production — such as through pipelines — needs to speed up to meet U.S. energy needs and fuel the economy. It was another defeat for the tribes.