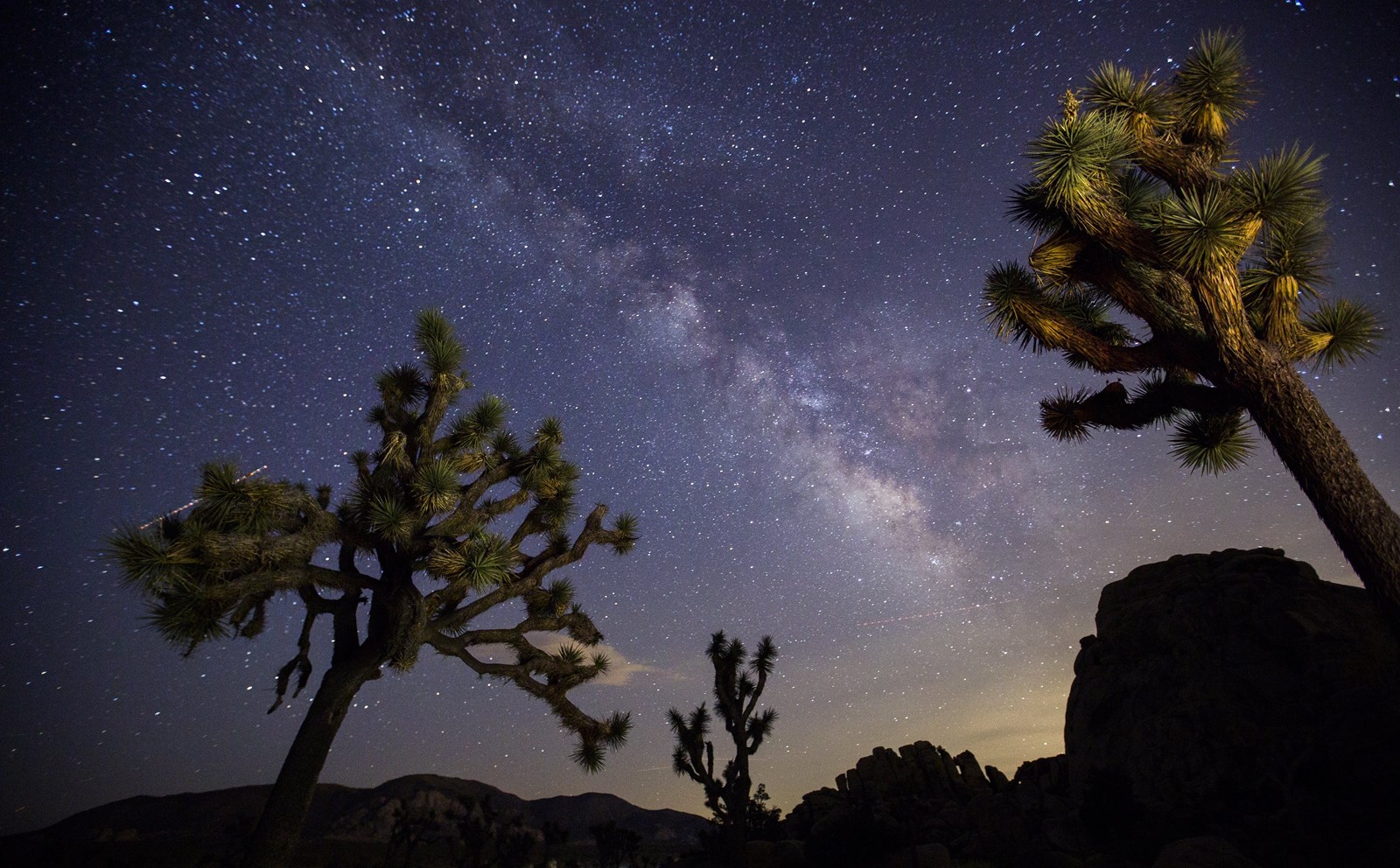 A VIEW of the Milky Way framed by Joshua trees and rocks at a campground popular among stargazers in Joshua Tree National Park, designated the 10th International Dark Sky Park in the United States. (Photographs by Allen J. Schaben Los Angeles Times) 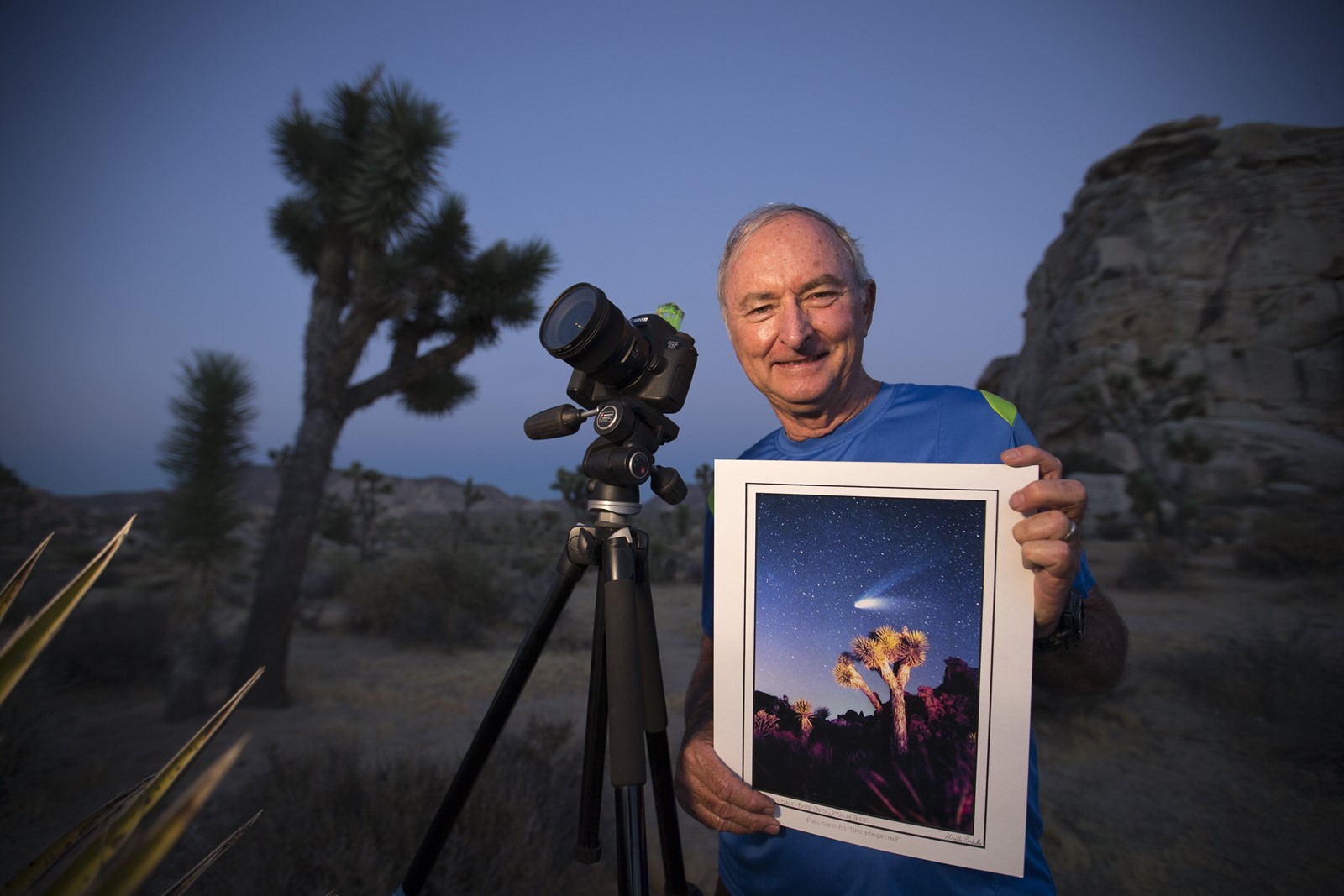 WALLY PACHOLKA has been photographing the night skies over Joshua Tree for many years. Here he holds a shot he took of the Hale-Bopp comet in 1997. ()
PREVIOUS IMAGE

The Milky Way arched overhead as photographer Wally Pacholka trudged across an expanse of boulders and sand here, searching for the right spot to plant the tripod of his camera.

“This is how clear night skies are supposed to look,” he said, scanning the wide, wide sky filled with bats and pulsating stars.

The rangy photographer, whose images of the night sky over southwestern vistas have been published worldwide, was in his element: scouting for cosmic views on a stark Mojave Desert landscape illuminated by frothy networks of stars and galaxies.

He was among a group of stargazers who had gathered around a picnic table Wednesday in the park’s Hidden Valley Campground to celebrate a significant announcement that day:

Joshua Tree, which harbors some of the darkest night skies in the United States, had been certified as the 10th International Dark Sky Park in the U.S. national park system. Others include Death Valley, Big Bend and Grand Canyon.

No other Dark Sky spot on Earth, however, is a mere 140 miles from a metropolis where stars were washed out long ago by mega-wattage flooding the night sky from airports, malls, billboards, theme parks, car dealerships and urban sprawl.

“The Milky Way is only a two-hour drive away by car,” Luke Sabala, the park’s physical scientist, likes to say.

The Dark Sky designation is part of a growing movement across the nation and around the world that wants skies illuminated by stars. It began in 1988 with the formation of the International Dark Sky Assn., based in Tucson.

The nonprofit, which has about 3,500 members, advocates limiting light pollution with measures such as no-glare street lights and low-energy bulbs, and lighting ordinances that apply to residences, businesses, public buildings and parks.

Joshua Tree has long been known as an ideal natural observatory to view the heavens.

“A 2010 survey showed that 28% of the park’s nearly 2 million annual visitors come … just for the night sky — and we think that number is going to grow because of this designation,” Sabala said. “So there’s a huge economic benefit for the region.”

Winning the distinction represents nearly a decade of hard work by activists including Pacholka; Sabala; Tom O’Key, a retired technical consultant in personal injury litigation cases; and park ranger Caryn Davidson. That’s because their application for Dark Sky status “involved the most complex set of circumstances we’ve ever had to consider anywhere in the world,” said John Barentine, program manager for the Dark Sky association.

“For example, the western edge of this 790,000-acre park is so polluted by the night light of Coachella Valley cities including Palm Springs and the Los Angeles metropolitan area that it is almost ineligible,” Barentine said. “But its eastern edge has levels of darkness found nowhere else in the state.”

The park also is framed by State Routes 62 and 247, the Marine Corps Air Ground Combat Center, the city of Twentynine Palms and the booming town of Yucca Valley. On the plus side is the park’s proximity to tens of millions of people in Southern California who, Barentine said, “could experience some of the most spectacular after-dark shows nature has to offer.”

The association, which designates at one of three levels — gold, silver and bronze, depending on the quality of the site — “decided to compromise: We gave it a silver,” Barentine said.

“I’ve been a promoter of Joshua Tree for 30 years,” Pacholka said, then fell silent, training the lens of his camera on a scene framed by one of the park’s peculiar namesake tree-like yuccas on the left, massive boulders on the right — and a dazzle of stars between them.

Then he started shooting, with a 24-millimeter lens and a 20-second exposure.

“Anyone with a digital camera can get nice images of the Milky Way these days,” he said. “But great shots depend on landscape, composition and darkness.”