Latinos in L.A. protest the detention of Noe Carias, who entered U.S. illegally as a teen. 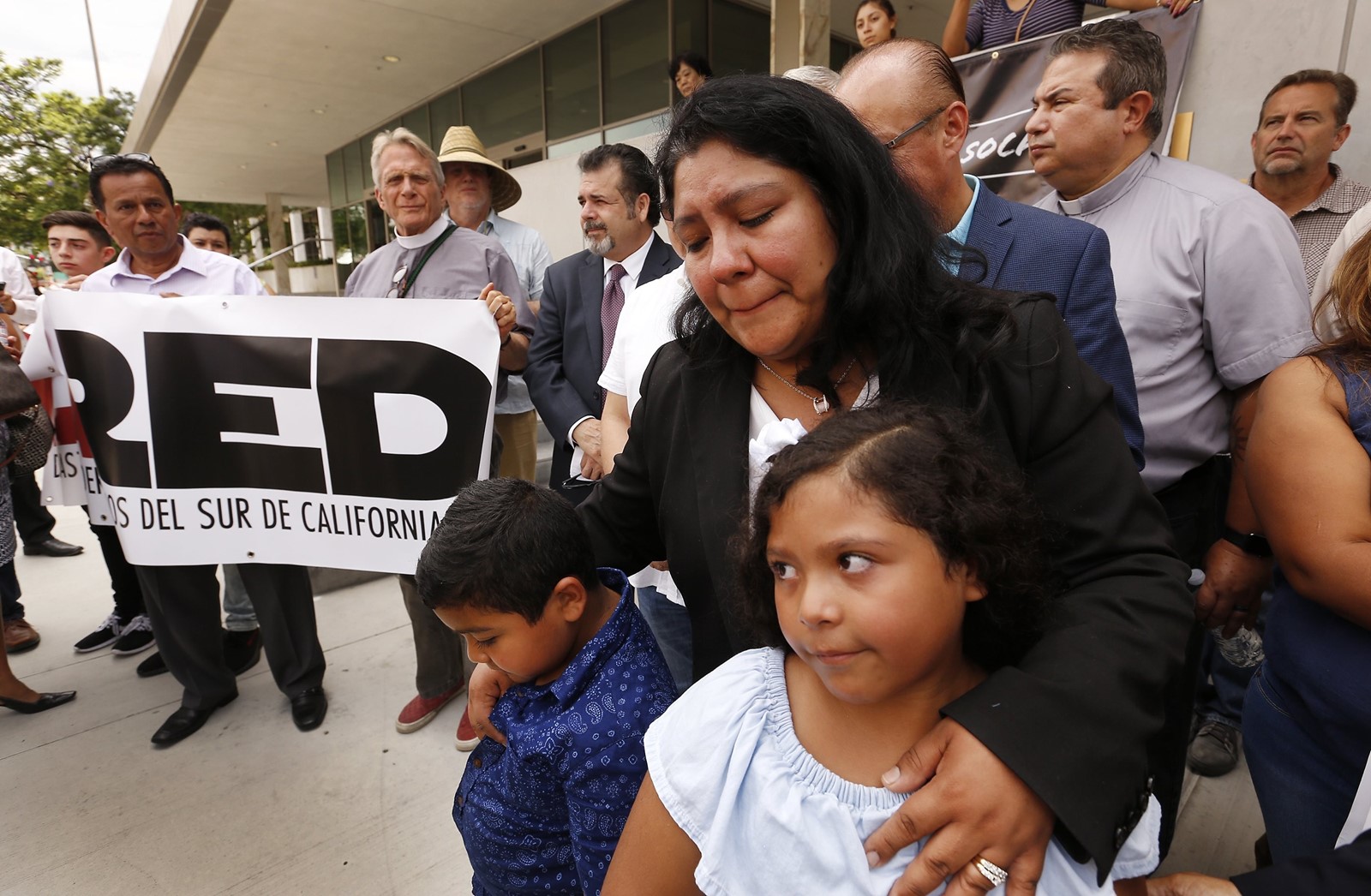 VICTORIA CARIAS, the wife of Noe Carias, with their two children outside the L.A. Federal Building on Monday during a protest by Latino religious leaders. (Al Seib Los Angeles Times)
PREVIOUS IMAGE

The arrest of a pastor during a routine appointment with an immigration officer Monday has sparked protest and sent worry through Los Angeles’ Latino religious community.

Noe Carias, who now leads an evangelical church near Echo Park, was first deported in 1993 after crossing illegally into the United States as a teenager. The Guatemala native then returned to the U.S. and ignored a second deportation order in 1995.

Lawyer Noemi Ramirez said Carias — who is married to a U.S. citizen — had been granted two one-year stays in January 2015 and April 2016. A third stay was denied this year.

At his immigration check-in Monday morning, Ramirez said, “they decided to say he’s removable because of his ’95 decision.” An official with the agency said more details on Carias’ case were not immediately available.

President Trump was elected with a promise to crack down on immigrants who are in the country illegally — including those with criminal histories or previous deportation orders.

Immigration and Customs Enforcement officials in Southern California say there has been no change from the policies carried out under President Obama. But Trump’s election has heightened fears in a city with a large population of people here illegally.

In a case this year that received national attention, Romulo Avelica-Gonzalez — a Mexican citizen who has lived in the United States for 25 years — was pulled over by federal agents minutes after dropping off his 12-year-old daughter at her Lincoln Heights school. Another daughter who was in the car sobbed as she filmed the encounter.

In May, The Times reported that though arrests by ICE are up 35% nationwide since Trump took office, they remain relatively flat in Southern California. Arrests of immigrants without criminal pasts have remained low in the L.A. region as well.

Carias was detained as his wife, Victoria Carias, was waiting in the lobby of the downtown building housing the U.S. Citizenship and Immigration Services field office. Victoria Carias said her husband had told her they would grab brunch after his appointment.

“He’s a good man, he’s a pastor, he’s been a good citizen,” Victoria Carias said. “He’s never done anything wrong. The only thing he did was come here illegally.”

Her husband, she said, had been living with relatives in Mexico before coming to the U.S. They met in church, and about six years ago he founded Iglesia Pentecostes Cristo la Roca de Poder. The couple have two children, who are American citizens.

Wednesday will be their 14th wedding anniversary.

“We didn’t expect this,” Victoria Carias said Monday, clutching her children, ages 6 and 5. “We came with a lot of hope that everything was going to go well. He said, ‘When we leave, we’ll go and eat.’ ”

Then she found out that her husband had started praying when he heard he would be arrested — less than 10 minutes into his appointment.

Noe Carias, 42, has no criminal history, Ramirez said. She quoted the immigration officer as saying: “Sorry, he’s deportable.… We’ve removed people even if they have [deportation orders] since the ’80s.”

Guillermo Torres of Clergy and Laity United for Economic Justice connects evangelical Latino pastors with immigration attorneys. He said that pastors already had met with and sent letters to immigration officials about Carias’ case.

“This case meets the criteria for [action] because it’s an evangelical pastor that poses no threat to our country, to our community,” Torres said. In addition, he said, situations like Carias’ can spread fear among Latino congregations.

Maura Sandoval, a relative of Carias and a congregant at his church, said that she can’t imagine it without him.

“This would leave us by ourselves,” she said, crying as she walked away from the federal building with the pastor’s wife. “He’s the one who guides us. Just like his children are losing their father, we are losing a great leader.”