Call them ugly, but Xolos rule as Mexico’s top dog 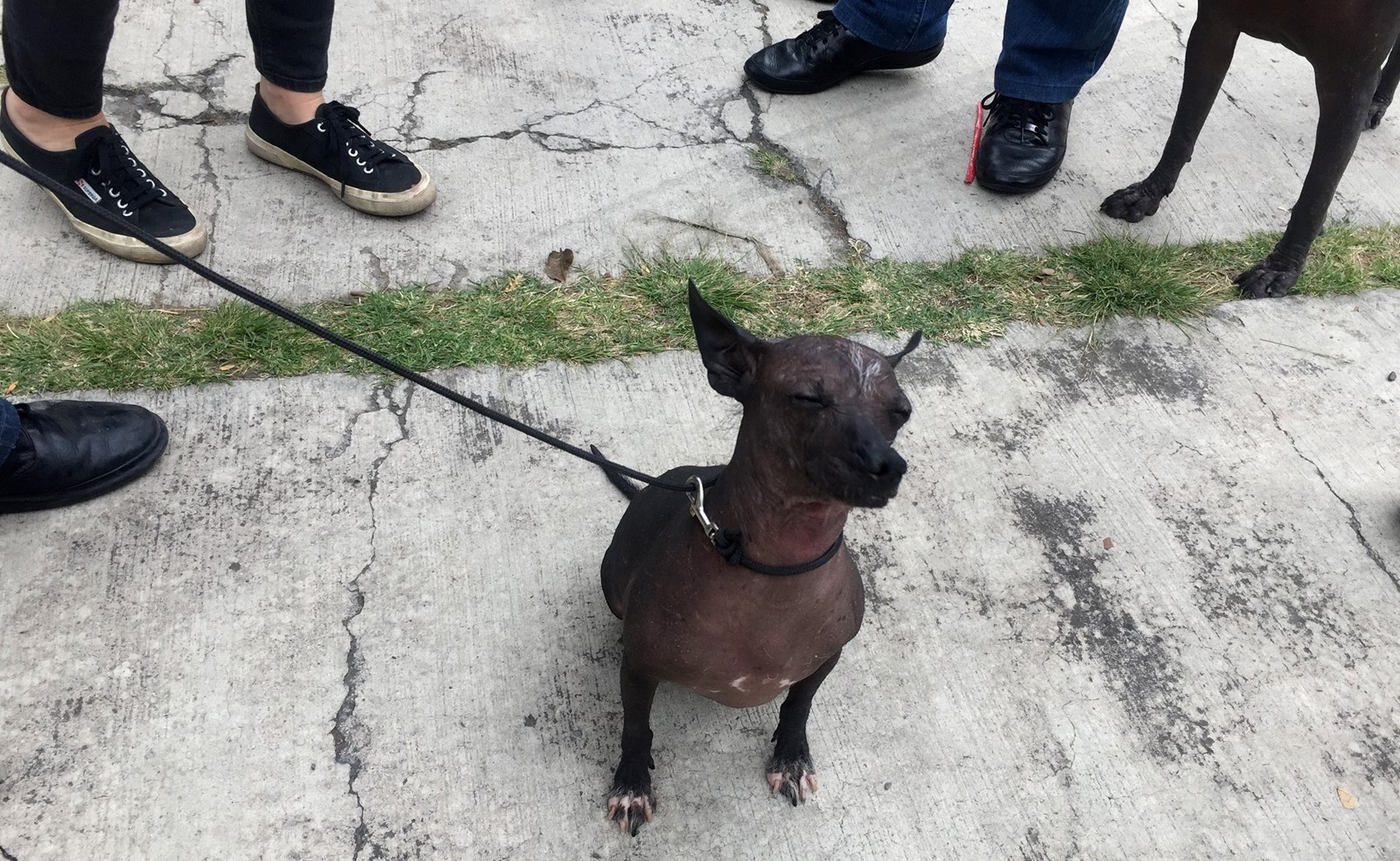 BRED BY the Aztecs, the Xoloitzcuintle is a status symbol and a nod to indigenous Mexico. (Kate Linthicum Los Angeles Times)
PREVIOUS IMAGE

The beasts are brown and hairless except for a wiry mohawk. Their bodies, warm and slightly waxy, call to mind a hot water bottle with four legs.

Yet when it came time for Aleph Henestrosa and his wife to get a canine, the decision was easy.

“These dogs are amazing,” Henestrosa said.

And perhaps more important: “These dogs are Mexican.”

The Xoloitzcuintle — pronounced SHOW-low-ITS-quintley in the indigenous language of Nahuatl — is a marvel of breeding by the Aztecs more than 3,000 years ago. Today, the dog is enjoying a resurgence among upper-class Mexicans as both a status symbol and a nod to their indigenous roots.

At up to $5,000 a puppy in a country where the average daily wage is less than $20, the breed is most likely to be spotted in wealthy enclaves such as La Condesa, in Mexico City, or Sayulita, a bohemian resort town on the Pacific Coast.

Although the people who can afford Xolos, as the dogs are affectionately known, may often be more closely related to Mexico’s European conquerors than to its native peoples, they are helping fuel a renewed interest in the country’s pre-Hispanic past.

It is part of what Henestrosa calls “a revolution of Mexicanness.”

The trend can be seen across Mexican culture, in the clothing of Carla Fernández, a designer who transforms the textiles of Mexico’s indigenous communities into contemporary styles, and in the palate of chef Enrique Olvera, whose Michelin-star restaurant Pujol features dishes that pay homage to classic Mexican street food and indigenous cuisine.

Mexico’s national dog, whose population dropped so low in the 1950s that there was an organized effort by the World Canine Assn. to find purebreds and breed them, is suddenly everywhere.

A goofy Xolo named Dante stars in an upcoming Pixar cartoon set in Mexico. Recently, the wealthy owner of the Tijuana soccer club chose Xolos as the mascot of his team in an homage to his hairless pup, Hermoso.

This year, the breed participated for the first time in the Westminster Kennel Club Dog Show.

Back in the early civilizations of Mesoamerica, Xolos were valued for a different reason. Archaeologists, who have discovered their bones in the tombs of the Maya and the Toltec, believe the dogs were sacrificed and buried beside their owners because they were believed to help guide human souls on their journeys to the underworld.

A less romantic and less discussed historical fact from that era: The dogs were also considered delicacies and were sometimes eaten at ceremonial events.

The prevalence of Xolos was noted in early observations by Spanish colonizers, who noticed that their lack of hair made them well suited to the hot climate.Since then, the dog has frequently been trotted out as a symbol of Mexican pride.

Artists Frida Kahlo and Diego Rivera collected Xolos and included them in their paintings celebrating pre-Hispanic history. Rivera gave a pair of the dogs to Dolores Olmedo, a wealthy art collector. The descendants of those canines still roam the grounds of the museum created at her estate, where they are photographed relentlessly by giggling tourists unfamiliar with bald dogs.

Despite their shocking appearance — Xolos have been mistaken for , the hunchbacked, bloodsucking beast of Latin American legend — many people find them beautiful.

Henestrosa acquired three of the dogs several years ago when he returned to Mexico after a stint abroad that included a job in finance in Europe and degrees at Dartmouth and Stanford. Mexico’s economy was growing, and he decided to return to his home country to be a part of it.

Like many Xolo owners, he says they’re more interesting — “and more spiritual” — than typical dogs. He calls his 6-year-old Xolos — Snuggles, Dumas and Tonatiuh — “the Kings of Condesa.”

They are taken out for strolls by a dog walker four times a day. They eat meals of chicken and broccoli stew, prepared by the family’s personal chef.

Because the dogs have no hair, they don’t leave fur on sofas or clothing. On the downside: Their skin gets dry and in sunny climates must be regularly slathered with sunblock.

Xolos are known for being standoffish, more like cats than dogs.

“Most dogs are completely silly — they love you regardless,” said Henestrosa, 44, as he walked his brood down a leafy street on a recent morning. The dogs were in a world of their own, with Tonatiuh occasionally stopping to gnaw on the ear of Snuggles, his runty brother. “These dogs look at you like, ‘What’s in it for me?’ ” Henestrosa said.

For Henestrosa, who often wears a fedora-style hat, the dogs’ unusual look and attitude are also something of a fashion statement.

“Everybody wants to meet them,” he said. “We get stopped every 15 meters by somebody wanting to take a picture.”

Recently, he and his wife decided to feature the dogs in an advertisement for their business: a chain of salons called Wax Revolution. They thought it was brilliant — hairless dogs advertising hair removal. But Henestrosa said they stopped the campaign because customers were either confused or grossed out.

For those who aren’t repelled, Xolos often inspire nothing short of obsession.

“These dogs are addictive,” said Miguel Retana, 61, who acquired his first Xolo years ago.

Retana, who works for Mexico’s election commission, spends much of his free time volunteering with Friends of Xoloitzcuintles Without Borders, a group that teaches schoolchildren about the dogs.

On a recent morning, he met with a few other members and their canines in a quiet park on the south side of Mexico City.

After a bit of prodding, Retana detailed the scope of his addiction: He owns 46 Xolos.

About a decade ago, back when Retana had only 30, his wife issued an ultimatum: “You have to choose between the dogs and me.”

The decision was easy, he said. His wife packed her bags.

Now he wakes at sunrise every day to feed them — they eat about 33 pounds of chicken a day — and spends most weekends ferrying his most prize-worthy specimens to dog shows around the country.

Retana said he loves the dogs because they are “magical” and connect him back to his Mexican identity.

“It’s our heritage, and we are obliged to protect it,” he said, stroking the head of a dog seated at his feet. “If we don’t know our past, we won’t know our future.”