Does a higher minimum wage pay off? 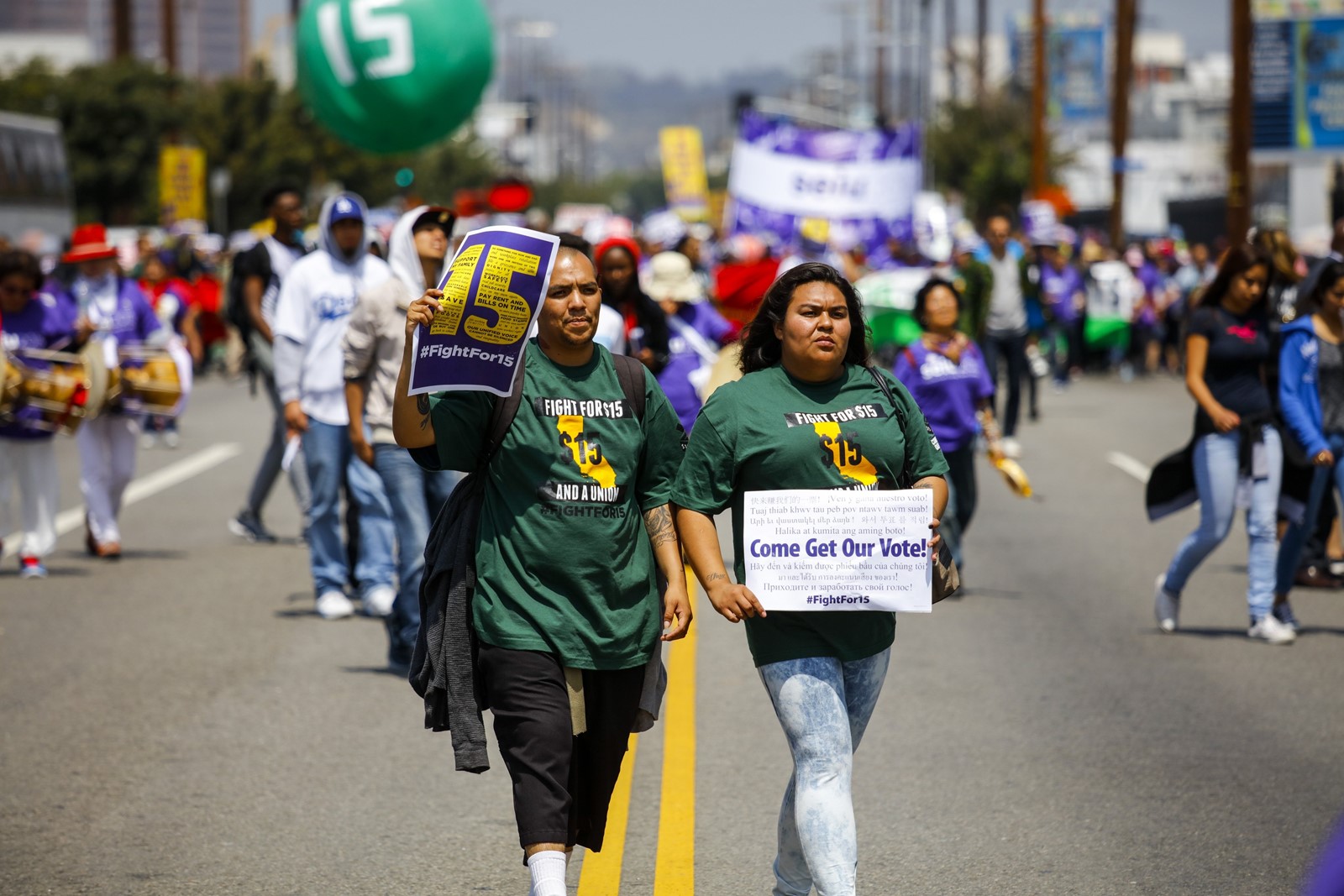 WORKERS backing a $15 minimum wage march in downtown L.A. last year. There may be no single answer to the question of where the wage should be. (Jay L. Clendenin Los Angeles Times)
PREVIOUS IMAGE

No two ways about it: The University of Washington’s new study of the jobs effect of Seattle’s higher minimum wage spells trouble for supporters of minimum wage increases.

That’s not merely because the study released Monday found a steep reduction in jobs and income among the city’s lowest-paid workers following the minimum wage raise to $13 an hour in January 2016, on its way to a nation-leading $15 for most employers within four years. It also found a strong increase in employment of workers earning more than $19 an hour. In the restaurant sector, for instance, the study found a 10.7% reduction in jobs paying less than $19, but no overall change in employment, implying that jobs paying more than $19 increased by 20%.

As my colleague Natalie Kitroeff observes, the findings are likely to cause shudders among the promoters of the minimum wage increase in Los Angeles, which will rise to $12 on Saturday and reach $15 for all but the smallest employers by July 1, 2020. That’s because it seems to suggest that, even if a modest raise in the minimum wage — say to $12 or $13 — won’t cost jobs, a bigger increase will.

The real problem with the Washington report, however, isn’t economic but political: The UW economic team that produced it has been held up as the ultimate arbiter on the effect of Seattle’s minimum wage.

The group’s initial report, issued last July and covering the first phase of the wage increase in April 2015 to as much as $11 an hour, found that the city’s low-wage workers earned more, but that effect was muted by reduced hours, and the effects canceled each other out almost completely. This was hailed by the minimum wage lobby as a data point in its favor, especially because it was supplemented by a finding that the higher minimum wage hadn’t driven employers out of business. You don’t hear such huzzahs this time around, when the core takeaway from the report is that “the minimum wage ordinance lowered low-wage employees’ earnings by an average of $125 per month in 2016.”

It’s difficult to reverse course and flatly declare the latest findings erroneous, as many in the minimum wage camp did almost immediately. “Their findings are not credible and drawing inferences from the report [is] unwarranted,” asserted UC Berkeley economist Michael Reich, who had issued a report on the Seattle initiative just days earlier, finding opposite effects — “Wages in food services did increase. … Employment in food service, however, was not affected.”

At the pro-labor Economic Policy Institute, Ben Zipperer and John Schmitt stated that the Washington paper suffered from data and methodological problems “that bias the study in the direction of finding job loss, even where there may have been no job loss at all.” And Jared Bernstein of the Center on Budget and Policy Priorities, and former chief economist to Vice President Joe Biden, judiciously pronounced the study “curious” and observed, as did other critics, that its findings are way out of line with other research on the minimum wage’s employment effects. It’s unwise, Bernstein said, to come to conclusions “based on one extreme outlier study with some eyebrow-raising quirks.”

The University of Washington researchers, led by economist Jacob Vigdor, defend their results, which are based on confidential data they see because they’re on a study contract from the city but which hasn’t been available to previous researchers in the field.

The controversy underscores a familiar feature of the minimum wage debate: The subject is so multifaceted that there may be no single answer to the question of where the wage should be. The answer will be different depending on the nature of the local economy, the prevailing wage, local politics and other factors, including ideology.

The most common standard is that the minimum wage should be about half the median wage. But as Zipperer and Schmitt observe, that would place the optimum minimum for Seattle at about $13 — so why that wage should have such pronounced effects is a mystery.

It may be impossible to solve the mystery until the UW study is peer-reviewed and its underlying data scrutinized more widely, if then. But a few points certainly are true. One is that its findings are out of line with almost all other studies of the minimum wage employment effect. That doesn’t make them suspect, exactly, but it does warrant a close examination of the methodology to see whether the researchers missed or misinterpreted something. Another issue is that Seattle’s unusually, and perhaps uniquely, strong economy may be warping the findings.

Then there are the limitations that even the UW researchers acknowledge. One is that their study left out multisite employers such as fast-food and retail chains because they simply don’t have sufficient data to include them. This group is among the biggest employers of low-wage workers, accounting for about 38% of the workforce, so its absence leaves a big gap. The study’s critics say it’s an especially important gap because chain employers have an easier time adjusting to higher hourly wages and can move workers from one place to another, so UW may have overstated the job losses.

Researchers also say they’re unable to capture earnings in the informal or “contract” sectors — cash employees or Uber drivers, for instance. It’s possible that some of the lost jobs have been shifted to these arrangements.

Still, it’s difficult to understand why the UW team found such pronounced effects, including sharp gains among workers earning more than $19, from a wage increase to $13, and why they were so out of line with previous studies. The researchers turn this into a virtue, arguing that their access to new data allows them to reexamine the received wisdom. Critics argue that the very fact that the researchers’ results are so out of line suggests that they’re flawed.

The biggest question is connected to the strength of the Seattle economy. The city’s unemployment rate is among the lowest in the nation, with growth so powerful that it may well overwhelm the impact of a minimum wage. The authors of the university’s initial study acknowledged that a year ago, when they noted that “the city’s low-wage workers did relatively well after the minimum wage increased [to $11], but largely because of the strong regional economy.”

Full-service restaurants in Seattle have had so much trouble finding help in this vibrant economy that their average wage rates already exceeded $13; it’s conceivable that the lowest-wage jobs have disappeared in part because workers are getting paid more. That also would solve part of the mystery of the surge in jobs at $19 an hour or more.

The UW study will be scrutinized closely in the coming weeks and months, and the next reports in the series will be as eagerly awaited as this one. But the one sure conclusion to be drawn from the latest study undoubtedly will be true of the next: If you expect research to definitively answer the question of whether a raise in the minimum wage is good or bad, or how high it should go, you’re bound to be disappointed.